Salisbury Cathedral is a historic building which was previously known as the Cathedral of the Blessed Virgin Mary. Located in Salisbury, England, this Anglican cathedral is one of the most remarkable examples of Early English architecture.

A leading architectural model built for 38 years (from 1220 to 1258), and it was the tallest church spire and the largest cloisters in the United Kingdom. Together with its surroundings, the cathedral is visited by over 500, 000 visitors and pilgrims a year. Other features that make this cathedral to be one of the most visited places in England are the world’s oldest working clock which was made in AD 1386 and one of the best surviving Magna Carta (one of the four original surviving pieces). On 28th April 1220 the foundation stone was laid, and by 1258 the transepts, nave, and the choir were completed. 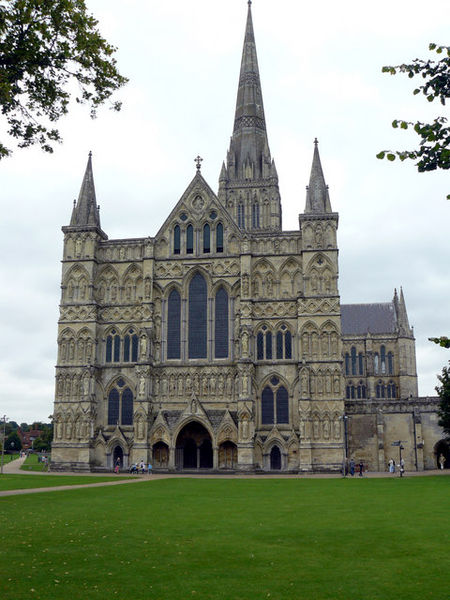 The only major part which was built after the 38 years of the main construction were the cloisters, the chapter house, and the tower and spire in 1320. The entire building was constructed in the 13th century, and it has a single, consistent architectural style known as the Early English Gothic style. The nave of the cathedral  Photo Credit

The spire of the cathedral is one of the most fascinating features, but it added 6, 500 tons along with the tower, which was a very dangerous weight. Over the centuries bracing arches, buttresses, and anchor irons were added to protect it from falling. James Wyatt made many changes were are significant to the cathedral in 1790. He replaced the original rood screen and demolished the northwest bell tower.

The Salisbury Cathedral is one of the three cathedrals in England to lack a ring of bells. During its construction, 70, 000 tons in total were used and 3, 000 tons of timber. The nave has three levels, and, inside, there are notable tombs such as the tomb of William Longespee who was the illegitimate son of King Henry II and the half-brother of King John. The cathedral’s clock. The oldest working clock in the world   Photo Credit

The chapter house has an octagonal shape, and it’s decorated with medieval frieze which depicts scenes from the books of Genesis and Exodus. Inside this house is the original copy of Magna Carta. The world’s oldest church clock has no face because clocks from that period rang out the hours on a bell.

From 1884 until 1929, it was forgotten in storage, and when it was discovered again in an attic inside the cathedral, it was repaired in 1956. The current organ inside was built by Henry Willis & Sons in 1877.

« The Vine that ate the south: The invasive plant, Kudzu is swallowing the southeast of the US
Experts unearthed a perfectly preserved Roman skeleton that had to be bent backwards because they made the grave far too small »