Honeymoon: The history of the romantic tradition

A honeymoon is a traditional holiday that newlyweds partake to enjoy their first days of marriage, sharing them in utmost intimacy, far from relatives and home.

It is a couple’s retreat to some exotic or romantic destination and a brief escape from reality which ought to provide privacy, easiness, and comfort in the first days of marriage, as well as a chance for them to strengthen their bond. Modern honeymoons, as holiday trips to which newlyweds engaged right after the wedding, became widespread somewhere at the end of 19th century during La Belle Époque and Europe’s cultural uprising.

In those joyful times, cities like Paris, Venice, Rome, and Verona rose to be leading centers of technological, scientific and cultural innovations, places which offered new and exciting forms of light entertainment in the rather somber world in the midst of the industrial revolution. The Moulin Rouge in 1900 at Boulevard de Clichy, Montmartre, Paris These places were a dream come true for every young couple. Couples, midway through their wedding reception, were leaving in a rush to catch a late train or ship in order to get a seat in the front rows of some grand show in one of the many cabarets, bistros or music halls. They longed for The Moulin Rouge, a walk underneath the Eiffel Tower or a romantically serenaded gondola ride through Venice’s canals. This western cultural custom of the newlywed couple going on a holiday together dates back to the early 19th century in Great Britain. There, the rich and esteemed, upper-class married couples would take what was referred as a “bridal tour.” Escorted by friends or family, their tour mostly consisted of planned visits to relatives, who for some reason didn’t attend the wedding. This practice soon reached every part of the continent and in France, from the 1820s onwards, it was known as Voyage à la façon Anglaise or an English-style voyage.

The bridal tour has evolved through the ages, leaving relatives and friends behind. Today, this trip is a special holiday and an exciting month for the newlyweds, and as the name stipulates, a moon cycle full of honey. The newlyweds, Ms. Yvette Villebon, and her husband, are on the steps of the staircase of a plane leaving on their honeymoon

Although there is no actual explanation and etymology of the word “honeymoon”in the Oxford English Dictionary, there are other examples dating back to the 16th century, where a similar term “hony moone,” was recorded for the first time as early as 1546. It represented an idea that the first month of marriage is the sweetest.

As a matter of fact, some evidence, although disputed, show that in some early traditions, as far as the 5th century, when the passing of time was  measured with the moon cycles, it meant exactly that. A monthly supply of Mead (alcoholic beverage produced of fermented honey) given to the newlyweds for everyday drinking, in good faith that by doing so, they would have a child at the end of the year. 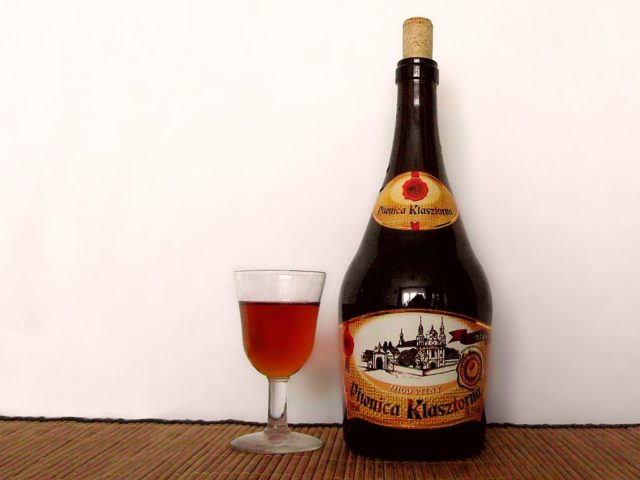 Trójniak – a Polish mead, made using two units of water for each unit of honey

During medieval times, in Ireland, Wells, Germany or Scandinavia, mead (honey wine), was traditionally a part of the marriage ritual. After the wedding, the bride and groom were provided enough with this honey-based alcoholic drink to last for one full moon. Believing that it possessed aphrodisiac properties, they were encouraged to consume it during their first moon together to instil good luck in their marriage.

They believed drinking mead would promote the couple with fertility and virility. From that ritual and belief sprouted the term “honeymoon.”

Nowadays, there are many words  in other languages with similar meaning and cultural references, yet, when translated, they all reveal the same honey moon cycle. The French form translates to”moon of honey” (lune de miel), as does the Spanish (luna de miel), the Romanian (luna de miere), the Portuguese (lua de mel) and the Italian (luna di miele) equivalents.