Walt Disney long dreamed of creating an amusement park where all of his cartoon characters would come to life and entertain both parents and their children. Many amusement parks existed throughout America at the time, but Disney wanted to make something out of the ordinary, a “magical park” he would call “Disneyland.”

It was a completely original concept, but not everyone shared Disney’s enthusiasm and so he faced many difficulties trying to persuade the investors to support him. In order to impress the potential financiers of the project, Disney recruited the artist Herb Ryman to draw the first illustrations of the amusement park.

In 1953, Ryman and Walt drew the first-ever Disneyland map, which was used by the Disney brothers to secure the funding they needed in order to build the park. They worked nonstop over two full days, starting on Saturday, September 26, through to Monday, September 28, creating one of the most important drawings in Disney history.

Original Disneyland map could fetch $900,000 at auction
Reuters is the news and media div… https://t.co/5kjp8ruNDD pic.twitter.com/NjhP10Ux6r

As reported by the New York Times, the map is headed to auction on June 25 at Van Eaton Galleries, in Sherman Oaks, California.

This one-of-a-kind piece of Disney memorabilia is part of a historic auction of nearly 1,000 Disneyland artifacts presented by Van Eaton Galleries. The map is the highlight of the auction, which also includes many other Disneyland artifacts like original props, wardrobe, ride vehicles, and souvenirs.

Until today, the rediscovered original map of Disneyland has not been seen by the public for more than 60 years and neither has it ever been offered at auction. According to Van Eaton Galleries, an auction house that specializes in Hollywood memorabilia and animation art, it is agreed that the map is the single most significant piece of Disneyland memorabilia to come to auction to date. A collector had bought the map from a former Disney employee, named Grenade Curran, who stored the valuable artifact in his home. Curran worked as a safety diver on 20,000 Leagues Under the Sea with Walt Disney and he was later hired for other projects, including Lady and the Tramp and The Mickey Mouse Club. 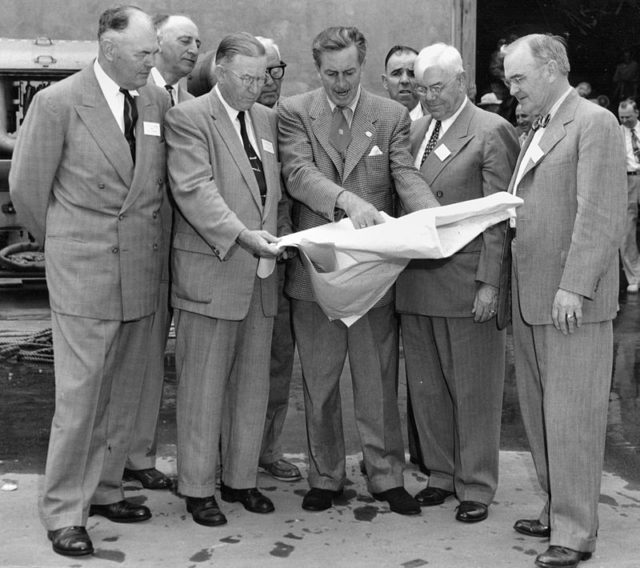 Walt had befriended Curran’s parents previously, as they were both involved in show business. His mother worked as a dancer in many Hollywood movies, and his father was a newsreel cameraman. Apparently, Disney was very fond of Curran, and in 1955, he gave him the map as a memento.

Curran was aware of the map’s importance and so stored it carefully, but little did he know that the map would go on to become this significant. Today, Van Eaton Galleries estimates that the artifact will sell for between $750,000 and $1 million, which makes it the most valuable Disneyland memorabilia ever offered. An aerial view of Disneyland in 2004. Photo Credit

About 40 years ago, Grenade Curran sold the map to Ron Clark, a Disneyland collector, and now Van Eaton Galleries is selling the map on behalf of Clark. It was thanks to this map that the Disney brothers managed to convince the potential investors that the project was feasible and so got them the funding they needed to go ahead with the project. Less than two years after Herb Ryman and Walt Disney created the map, Disneyland came to life, opening in Anaheim, California. It was an instant hit and in a short period, brought in staggering profits.

Disneyland became the most popular and influential theme park in the United States and it would go on to change the world. Throughout the years, Disneyland has undergone a number of expansions and renovations and, as Walt Disney himself has said, “Disneyland will never be completed. It will continue to grow as long as there is imagination left in the world.”

« Nine drops since 1930: The longest running pitch drop lab experiment in history
Why Iggy Pop declined joining the Doors as a replacement for Jim Morrison »