For some years a bizarre trend has flourished in China, known as the duplitecture movement. The results can be seen in a number of Chinese cities. In Tianducheng, not far from Shanghai, there is a copycat urbanscape of Paris that offers a 354-foot-tall replica of the Eiffel Tower, one-third the height of the real tower in France. Residential buildings surround the copied complex, all set to provide housing for tens of thousands of people. The housing development has reportedly remained empty thus far.

In other places, one comes across a nearly perfect copy of London’s Tower Bridge and entire city blocks that look like Italian or Swiss-like villages. In the province of Guangdong, the Chinese built an exact copy of the UNESCO-protected Hallstatt, a historic village in the heart of Austria. To produce a full-scale replica of this mesmerizing place, China reportedly spent $940 million.

Producing copies of other cities might not be such a surprising thing for China, a country well known for its mass production capacities in industry. What’s perhaps more surprising is a famous duplicate elsewhere, specifically in Bangladesh. While the Chinese have demonstrated a keen interest in copying the famous landmarks that dot the European continent, the Bangladeshi copied a landmark of its neighbor, India. In 2008, an almost perfect replica of the famed Taj Mahal was created in this South Asian country. 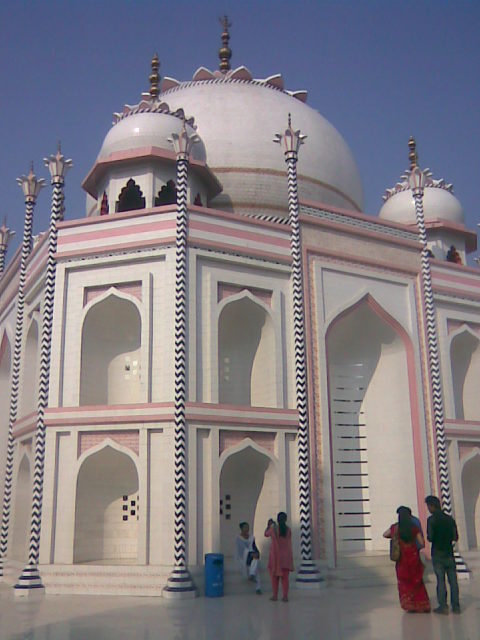 A replica Tajmahal at Norshingdi Bangladesh. Author: Mamun2a CC BY2.0

Just a year before the Taj Mahal got its fake twin across the border, this ivory-white mausoleum–made out of marble and rising by the Yamuna river in Agra–was pronounced as one of the new seven wonders of the world.

The construction effort of its copy was financed and initiated by the wealthy Bangladeshi filmmaker, Ahsanullah Moni. He explained that one of the reasons for embarking on such a project was that Bangladesh did not have any famous tourist landmarks. Also, as he explained it, because a vast majority of Bangladeshis cannot “afford to go to Agra or to see the Taj,” he took the liberty of “bringing the Taj to them.” In reality, Bangladesh is a country that struggles with poverty. By accomplishing this project, Moni hoped that it would not only attract home visitors but also boost tourism by bringing in more foreign travelers.

Marble, bronze, and granite imported from Italy, as well as diamonds secured in Belgium, were used to produce the historic wonder’s duplicate. The full-scale replica sits a few miles outside of Dhaka, the Bangladesh capital city.

The fake Taj Mahal occupies an area of about four acres, and its construction reportedly cost roughly $56 million. Moni, who also owns a film studio and a cinema, envisioned the site as a sort of large film set.

He first fell in love with the Taj Mahal while visiting Agra in the early 1980s, and he returned to see the landmark several times. To make his wish of bringing the Taj to the Bangladeshi people come true, Moni sent out a team of experts to take measurements of the historic edifice. He also made sure to use the “same marble and stone as in the original Taj.” The outcome looks beautiful, but constructing a copy of the Taj Mahal in Bangladesh did not please Indian officials. There was even a threat of suing Ahsanullah Moni for copyright infringement.

Read another story from us: There is a full-scale replica of the original Parthenon in Nashville, built in 1897

After all, the Taj resembles a peak accomplishment of Mughal architecture, which took nearly two decades to finish in the 17th century The wondrous architectural piece was commissioned by the Emperor Shah Janan as a mausoleum complex for his second wife, who died during childbirth.

“You can’t just go and copy historical monuments” is a complaint heard from an Indian official. The Taj Mahal in India attracts some 8 million visitors a year.

« My name is Popov, Dusko Popov: The man who inspired James Bond
Johnny Appleseed: His trees invigorated the early frontier but his life was not a fairy tale »