During the early 19th century, owning a luxurious rowing barge was fashionable among the European royal houses. Royal houses from different countries competed among each other and tried to build the most beautiful and glamorous barge in the world.

These rowing boats were a symbol of prestige and were only used on special occasions such as welcoming of foreign dignitaries, royal weddings, jubilees, etc. Probably one of the most beautiful 19th-century barges is the Dutch Royal Barge and its nickname, “the Golden Carriage of the Water,” suits the vessels perfectly.

The Dutch Royal Barge received its name because of the spectacular gilded Neptune sculpture at the bow. Besides Neptune, the mighty Roman god of water, the barge is decorated with various mythical creatures and golden ornaments.

The designer of this beautiful water carriage was a 21-year-old architect called Cornelis Jan Glavimans, and it was built between 1816 and 1818. The barge was commissioned by King William I, the first King of the Netherlands. Having that in mind, this boat is as old as the new kingdom that William proclaimed and it represents an important piece of Dutch history. 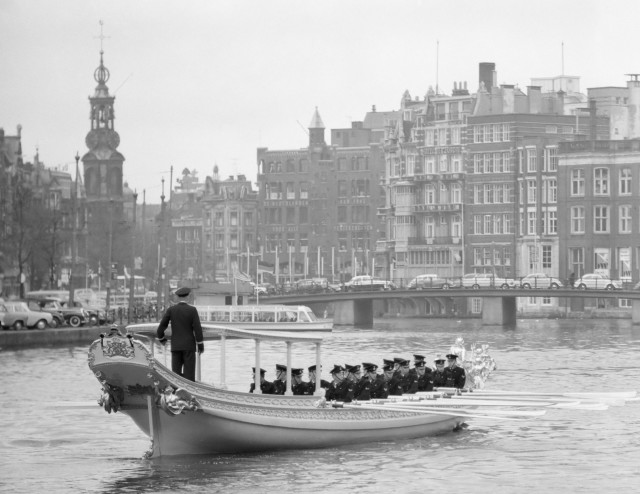 Here is a short description of the barge: It is about 56 feet (17 meters) long, and it can accommodate 20 rowers, plus the passengers. The whole hull of the boat is covered with gilded wooden carvings, but the main feature is the Neptune carving at the front. Neptune is seated in his shell-like carriage that is drawn by three mythological seahorses (hippocampi). He is portrayed holding a trident in one hand and the reigns of the carriage in the other. The sides of the barge are trimmed with neatly carved floral designs that include acanthus vines and orange branches. These particular plants were chosen because King William was a descendant of the famous House of Orange. Back on the stern of the boat is a carving of the royal coat of arms, made in great detail.

Although it was built for him, William I of Orange never actually used the barge. It sat anchored for 23 years before finally making its first voyage. On March 30, 1841, the Royal Barge carried William II (the new king) to his inauguration ceremony. After this, the barge was somehow forgotten again. In 150 years it was used on no more than 30 occasions. Its last recorded service was on April 29, 1962, for the celebration of the silver wedding anniversary of Queen Juliana and Prince Bernhard.

In 1983, the barge was decommissioned and given to the National Maritime Museum (Het Scheepvaartmuseum) in Amsterdam, as a permanent loan. Although given to the museum, the barge is still royal property and it can be returned to service if the king desires it.

Read another story from us: Simon the cat received the Royal Navy’s honors after feline performance on the HMS Amethyst

After recent renovations at the museum, it was also time for the barge to receive its long-awaited restoration. In 2014 to 2015, experts from the National Maritime Museum made a complete restoration of the barge. They did a thorough job, making it look brand new and glittering, and even more, making it seaworthy again.

Since October 2015, the Royal Barge, in Dutch de Koningssloep, has been back on display at the museum, now in its full glory. We can only hope that this maritime and historical gem will once again feel the waves on its hull one day.

« Via Egnatia – The ancient Roman road that connected Rome with Constantinople
Hever Castle, home of Queen Anne Boleyn, restored by an American in early 20th century »