The “last note” the eccentric novelist Ken Kesey ever wrote was “Ocean, Ocean I’ll beat you in the end.” While this may be the tip of the iceberg for Ken Kesey, author of One Flew Over the Cuckoo’s Nest, it’s still a worthy mention from his many psychedelic escapades and misadventures.

He was born in 1935 in La Junta, Colorado. He graduated from the University of Oregon in 1957 then went on to study creative writing at Stanford University as part of a graduate fellowship. It was during this time in 1960 that he volunteered to take part in a military experiment with new mind-altering substances. Perry Lane and Vik Lovel, two graduate students of the psychology department, invited Kesey over to participate in a secretive program known as Project MK Ultra, which was a CIA mind-control experiment at the time, using human guinea pigs to explore what power and control one could have over someone under the influence of psychedelics. 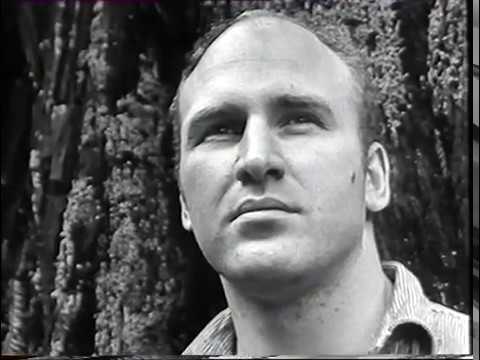 As part of his experience in the program, Kesey experimented with LSD, as well as other psychedelic drugs (mescaline, AMT, DMT, psilocybin, etc.). He would write about his experiences in detail, both as part of the program and in the following years as he continued with personal and recreational experimentation. Also during this time he worked with patients at a mental hospital, the experience of which would later be used as material for his famous novel.

If it wasn’t for Kesey’s engagement with the MK Ultra program, the chain of events that led to the creation of One Flew Over the Cuckoo’s Nest would most definitely have turned out differently and the book probably would never have seen the light of the day. 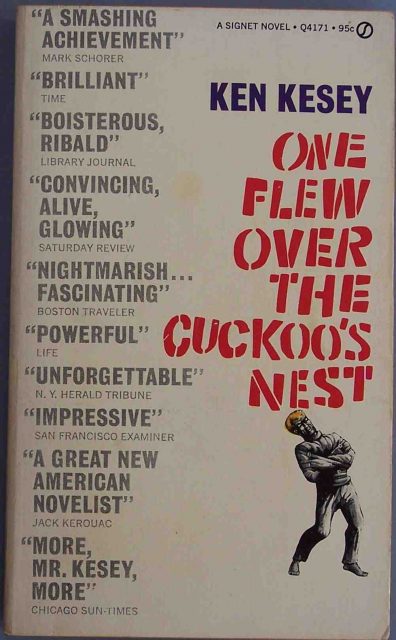 Early book cover of One Flew Over the Cuckoo’s Nest. Photo by CHRISTO DRUMMKOPF CC by 2.0

Kesey believed that complex, profound books could only come about if the author had personally lived through the actual narrative. For him, all the experiences that he had taken part in: the psychedelics, the program, the CIA, the institutions and the psychiatric hospital, had provided him with the direct experience necessary to turn those experiences into literature.

After the publication of One Flew Over the Cuckoo’s Nest in 1962, Ken Kesey became famous for forming a small yet highly influential counterculture community which took colorful and crazy bus trips across the country, sometimes with Neal Cassady at the wheel (Dean Moriarty in Jack Kerouac’s book On the Road). Amusingly dubbed The Merry Pranksters, they threw parties, gave out LSD to passersby, and documented the journeys in many books. To nobody’s surprise, the famous psychedelic rock band The Grateful Dead were also members of the commune and were then known as The Warlocks. The adventures of The Merry Pranksters in their bus named “Further” were brilliantly documented in Tom Wolfe’s book The Electric Kool-Aid Acid Test. 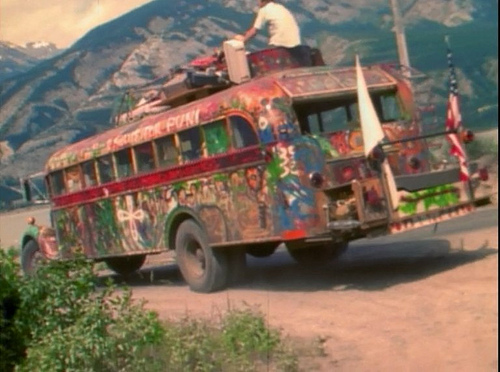 The Merry Pranksters bus “Further”. Photo by Rcarlberg CC by 4.0

The psychedelic shenanigans of the group however are nowhere near as famous and crucial as Kesey’s novel One Flew Over the Cuckoo’s Nest. It stands as a literary beacon of rebellion and nonconformity against the dehumanizing social norms and regulations during that time. It also became an acclaimed cinematic example of a virtually flawless movie adaptation starring Jack Nicholson, even though Kesey hated the script of the movie.

It would be an understatement to say that Kesey was fond of psychedelic drugs, as much of his writing happened under the effects of LSD. His other critically acclaimed book Sometimes a Great Notion was also adapted into a film (starring Henry Fonda) and focused on human individuality and the self. Kesey along with the Merry Pranksters advocated responsible use of the mind-altering drugs and they would often clash with the authorities. 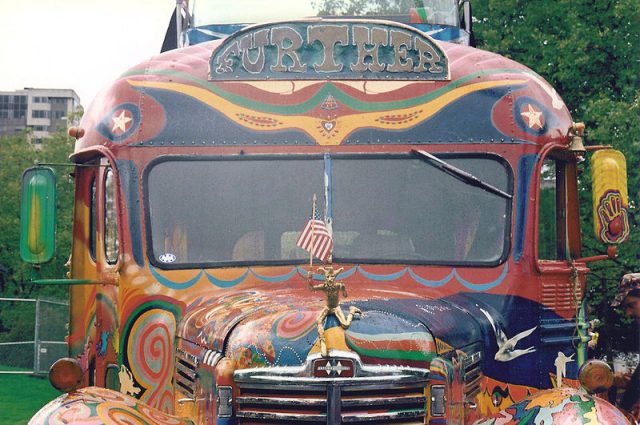 Front view of the psychedelic bus Further. Photo by Jmabel CC by 3.0

In 1965, Kesey was arrested for marijuana possession and consequently tried to avoid the police by faking his own death. The media bought the alleged story, but the authorities didn’t believe it.

With a little help from his friends, he placed his vehicle on a cliffside road near Eureka with a note that poetically “bid his farewell,” as he sought refuge in Mexico in the back of a friend’s car. After months of stealthy FBI avoidance, he was finally caught and quickly sent to jail for five months in Redwood City, California, eight months after seeking refuge in Mexico.

Related Video: What was Shakespeare Smoking?

After the media fiasco, he was released and returned to his family farm in Pleasant Hill, Oregon. It was at this point that the adventurous writer began settling down. He lived there for the rest of his life, writing many essays, books, and articles that reflected on his adventures (and misadventures).

Undoubtedly, Ken Kesey took part in forming the great hippie counterculture of the 60s, advocating social humanism and propagating spirituality in his own way.

His cult novels, the bus trips, and the countless LSD trips certainly spiced up his writing style and gained him recognition. They might have even served as an inspiration to the Gonzo journalism advocated later by Hunter S. Thompson. Whatever the “ocean” might have been, Kesey certainly proved himself victorious.