The Strange History of our Bizarre Halloween Rituals

The history of Halloween is as spooky as the holiday itself. Each year Halloween is celebrated as a fun occasion. It is a time when young children dress up in costumes and head out for trick or treat. On Halloween night, the streets blossom with little ghouls, goblins, witches, and princesses, each carrying spooky trick or treating bags packed with candy.

At the same time, front porches are lit up with grinning Jack-o’-lanterns. Overall, the yearly celebration of Halloween is a joyful one that is ripe with fun. However, what you may not realize is that there are several haunting traditions behind the modern festivities. From Jack-o’-lanterns to costumes, today’s most popular Halloween traditions have a haunting past! Two kids dressed up in ghost costumes go trick or treat at haunted house for Halloween.

Halloween is at its root a ghostly sort of tradition. The modern celebration of Halloween is based on the ancient pagan celebration of Samhain. In days of old, pagans and Celts celebrated Samhain as a way to mark the time of the year when the veil between our world and the Otherworld was thin. This thinning of the veil allowed ghosts to wander freely between our world and the spirit world. This spirit world is also known as the Otherworld in Celtic traditions. Most of today’s most popular Halloween celebrations find their roots in this idea of a thin veil. 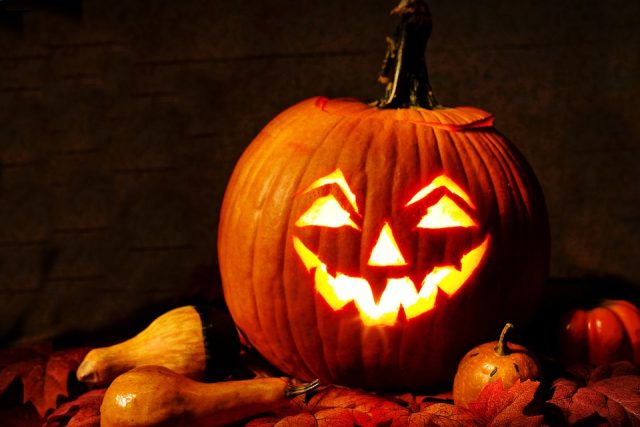 Although carving a Jack-’o-lantern is a seasonal tradition today, this was not always the case. The practice of carving a Jack-o’-lantern originates in the Irish myth of stingy Jack. Stingy Jack later became Jack of the Lantern.

According to his myth, Jack tricked the Devil. Then he made the Devil promise that he would not come for his soul when he died. When Jack did die, as the legend goes, God wouldn’t allow Jack into heaven. And neither, after being tricked, would the Devil permit him into hell. Instead, Jack’s soul was doomed to wander the earth with only a burning coal in his lantern to light the way.

This legend gave birth to the modern-day Jack-o’-lantern. First people carved beets and gourds in the form of Jack’s lantern, as these were more widely available in the British Isles. Then as people moved to North America where pumpkins are more readily available, pumpkins became the most popular carving choice. Similar to the carving of Jack-o’-lanterns, the tradition of a dumb supper is also intertwined with ancient Celtic traditions. However, instead of warding off evil spirits as the Jack-o’-lantern is meant to, a dumb supper welcomes the souls of those who have passed. During a dumb supper, an extra setting is prepared at dinner time and a chair left empty. This creates a place of rest for any souls or spirits of loved ones who have passed that may be wandering when the spirit world mingles with our own. These meals are also generally held in silence out of respect for the spirit. What would Halloween be without costumed children running about trick-or-treating? Yet, what most may not know as they help deck their children out in their costumes is the true origin of this tradition. While Halloween costumes are mainly associated with trick or treating today, in history this was not always the case.

Related story from us: The Dark Hedges: The long, creepy, ominous tunnel of Northern Ireland

The act of dressing up as a ghoul, goblin, or witch on Halloween night was a traditional way to protect one’s self when going outdoors on Halloween. In alignment with the belief that spirits wander freely on Halloween, costumes presented a way to disguise one’s self from any evil spirits. After all, if you looked like an evil spirit, then the spirit would be less likely to recognize you and cause mischief. Hence the peculiar history of our favorite Halloween tradition.

« The tragic U.S.S. Indianapolis, missing for 72 years, found on Pacific floor 18,000 feet below surface
Tristan da Cunha is the most remote inhabited archipelago in the world »