A petrifying well is a well which gives objects a stone-like appearance. If an object is placed into such a well and left there for a period of months or years, the object acquires a stony exterior.

At one time this property was believed to be a result of magic or witchcraft, but it is an entirely natural phenomenon and due to a process of evaporation and deposition in waters with an unusually high mineral content.

This process of petrifying is not to be confused with petrification wherein the constituent molecules of the original object are replaced (and not merely overlaid) with molecules of stone or mineral.

For many centuries, locals believed that this Petrifying Well was cursed by the devil – a myth fueled by the fact that the side of the well looks like a giant’s skull. They constantly lived with the fear that if they touched the well’s water, they would be turned to stone too. 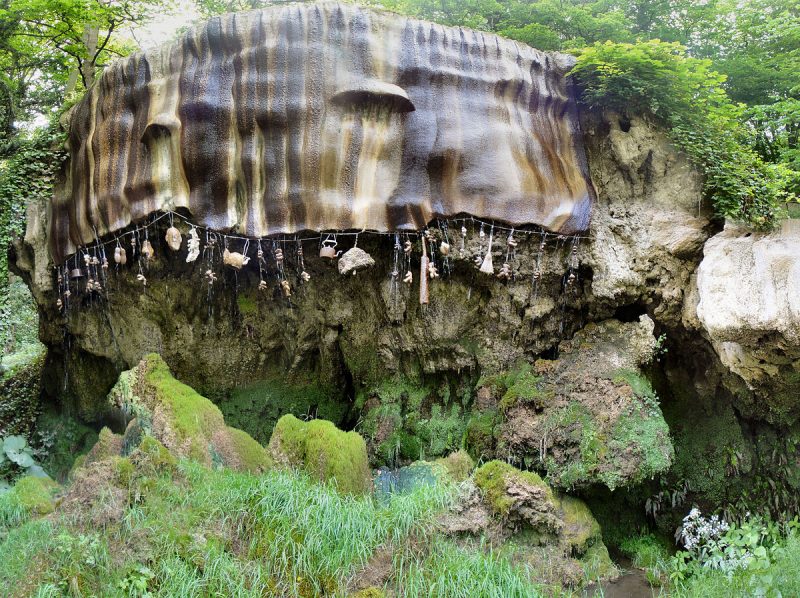 For centuries, people have placed everyday objects in the dripping waters and been amazed to see them slowly turn to stone over just a few weeks. By chris 論 – Own work, CC BY 3.0,

What is truly amazing is the speed of this geological phenomena. A few adventurous people left everyday objects in the dripping waters, only to witness the transformation. The objects slowly turn to stone over just a few weeks.

Some of these relics can be spotted even today, like a Victorian top hat and a lady’s bonnet from the 1800s – both converted to solid stone. More recently, people have left teddy bears, kettles, and even a bicycle in the petrifying well, with similar results. In fact, the object is just acquiring a hard shell of minerals in much the same way as stalactites and stalagmites form in a cave.

“When I saw the stone teddy bears hanging under the waterfall, along with clothes, top hats, shoes, trainers and even an umbrella, I realized that I was observing an amazing geological spectacle,” Monty White, a tourist, wrote on his blog. “Small teddy bears take between three and five months. Larger porous items (large teddy bears and clothing) take six to 12 months. Non-porous items such as a top hat or a fireman’s helmet can take up to 18 months to be encased in stone.”

Modern day scientists got around to analyzing water samples from the Petrifying Well and the water was found to contain a high mineral content that forms a coating around objects. With prolonged exposure, the coating would create a hard mineral shell, a lot like how stalactites and stalagmites form, but at a much faster pace. In fact, the calcite levels in the water are so high that visitors are forbidden from drinking it! 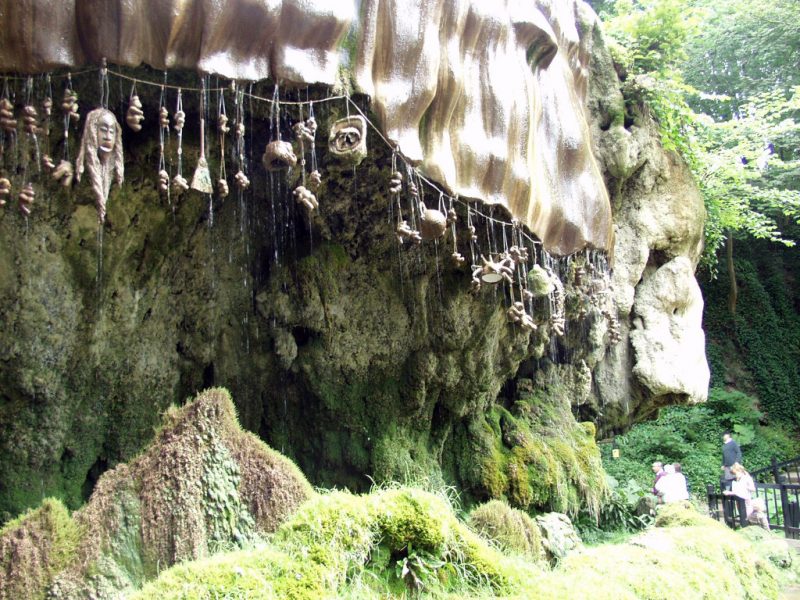 “The water has a very high mineral content, please DO NOT be tempted to drink it!“By Uncool Eddie – Own work, CC BY-SA 3.0,

History shows that the well wasn’t always known for its petrifying qualities. The earliest written reference to the well was by John Leyland, antiquary to Henry VIII, who visited the well in 1538. He wrote that the well was very well-known and visitors drank and showered under its falling waters, as they were believed to have miraculous healing powers. Around this time, the legendary prophetess Ursula Southeil, who is better known as Mother Shipton, began to gain popularity.

According to popular legend, Mother Shipton was a Yorkshire witch, born in the cave, who prophesied about future events in the form of poems. As Mother Shipton’s notoriety grew, so did the fame of the petrifying well. The entrance to the cave in Knaresborough in which according to legend Mother Shipton was born. By chris 論 – Own work, CC BY 3.0,

In the early 1600’s medical physicians examined the waters, and pronounced that they could cure any malady that the body might have.  Then, in 1630, King Charles I sold the land that the well sits on to Sir Charles Slingsby.  Sir Slingsby must have been able to recognize a business opportunity when he saw one because he immediately put the well on exhibition and charged money for guided tours around his new property.   The well and its surrounding area have been in continuous operation as an attraction since then.

It is often described as the UK’s first official tourist attraction. The cave and dropping well, together with other attractions, remain open to visitors.

« 2,000-year-old bottom wipers yield evidence of diseases carried along the Silk Road
The mysterious Crooked Forest of Poland grows in an area that suffered during WWII »