THOTH! Archaeologists in Egypt are busy with a new cycle of excavation missions in the Egyptian deserts. Each month comes with a bunch of new announcements and new finds. The latest in the series of discoveries features a newly found ancient necropolis from where at least 40 sarcophagi containing mummies have been located. The most striking of all are the remains and funerary decorations believed to have belonged to a high priest of the Egyptian deity Thoth, the Egyptian Ministry of Antiquities announced on February 24th.

The network of tombs was discovered some 150 miles south of the country’s capital, Cairo, close to the Nile and the city of Minya, roughly four miles north of the site known as Tuna Al-Gabal. Archaeologists have dated the tombs to being about 2,300 years old, associating them with the late Pharaonic days and the early Ptolemaic era, according to a statement shared by the Ministry of Antiquities.

The finds from the underground tombs include at least 40 sarcophagi and other valuable relics–more than 1,000 ushabti funerary figurines, jewelry, and pottery among others. The ushabti figurines have frequently been retrieved from other burial sites in Egypt in the past, and they are thought to have been laid next to the dead to offer assistance in the afterlife. 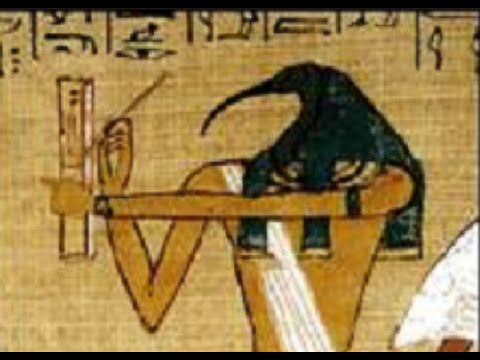 What has excited everyone the most was the mummy adorned with a bronze collar, showing the deity Nut, protector of the dead in the Ancient Egyptian belief system. Other artifacts collected from the resting place of this mummy reportedly include colorful beads with semiprecious stones, four amulets, and alabaster jars created to preserve the insides of the departed. The mummy is considered to be that of a high priest of Thoth, a god that was worshiped in Ancient Egypt for its wisdom and was also associated with the Moon. 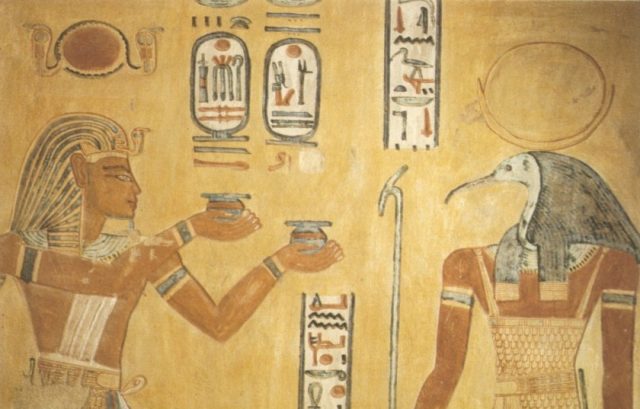 Ramses III. in front of god Thoth in the tomb of Khaemwaset

More remains seem to be associated with Thoth, and while the identities are not all confirmed, some remains could have belonged to family members of the high priest buried with the bronze collar. Everyone must have been dazzled when deciphering the hieroglyphics inscribed on one of the four amulets collected from the high priest’s tomb. One of them intriguingly translated to “Happy New Year.” 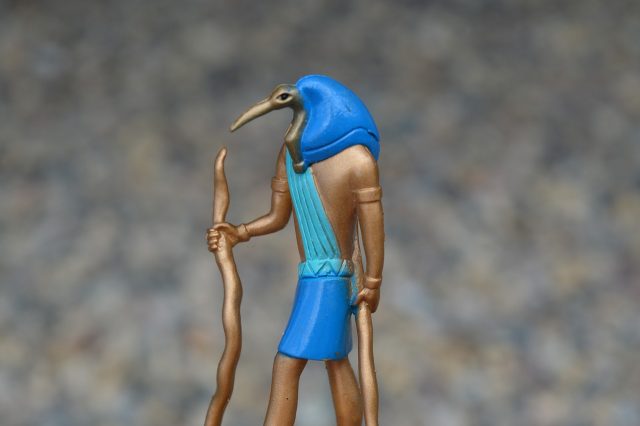 Among ancient Egyptians, Thoth was connected to the invention of writing, a patron of books and libraries. Perhaps that is why he was still worshiped even in the Ptolemaic era, the last dynastic period of Egyptian history (305 BC until 30 BC), marked by its prominent scholarship center, the Library of Alexandria.

The common portrayal of this deity included an ibis-shaped head, and its worship commenced in Lower Egypt probably in the pre-Dynastic period, in between the 6th and 3rd millennia BC. Since the worship of Thoth lasted for such an extended period of time, some sources suggest that Thoth has been among the longest-worshiped deity figures in Egypt (and potential record-breaker at world level).

For many decades now, archaeologists and scholars have been able to study different sites discovered in the region of Tuna Al-Gabal. Apparently, the realm is rich with ruins and relics, since new findings continue to emerge even now in 2018. Archaeologists and restorers are to take five more years to study and recover all artifacts retrieved from the newly found tombs.

The latest round of excavations in Egypt began in 2017 and are led by Mostafa Waziri, who is the Secretary-General of the Supreme Council of Antiquities. Another necropolis, again in the Tuna Al-Gabal region, has been identified only last year, and it concealed 17 mummies.

Earlier in February of this year, Egyptian authorities also announced the discovery of a tomb that was built for an ancient priestess who served Hathor, one more important Egyptian deity associated with motherhood and fertility. The find, very close to Cairo, was significant as it offered an authentic look back into the life of an ancient Egyptian woman of higher rank, some 4,000 years ago. Her mummy has not been found so far, only the tomb.

Related story from us: The tomb of the high priestess Hetpet, built 4,400 years ago, unearthed in Egypt near the Great Pyramids of Giza

With the series of new finds, ongoing excavation efforts at multiple locations across the Egyptian deserts, as well as the construction of a museum facility close to the Great Pyramids of Giza, Egyptian authorities are confident that they will revive the tourist industry in the country.

« In 1903, two men and a dog made the first documented automobile journey from San Francisco to New York City
In 1965, a man’s car was hit by a piece of meteorite, and after his insurance company called it “an act of God,” he allegedly went to church in search of payment »