A Chippewa chief commonly referred to as “John Smith” lived to be an incredibly ripe old age. If you eat a virtuous diet rich with sturgeon fresh from a lake, partake in vigorous regular exercise in the clear air of northern Minnesota, and stay sociable by getting married—eight times!—but never have the bother of raising children, how long might you count your years?

One man lived to the ripe old age of 137, according to reports at the time. Or maybe he was 100, or maybe 138. While his exact age remains in dispute, this much is certain: He sure looked pretty old.

The Chippewa Native American named Ga-Be-Nah-Gewn-Wonce —which translates to Sloughing Flesh or Wrinkled Meat, depending on your source—was called John Smith by white people, according to a February 8, 1922, front-page obituary in the Minneapolis (Morning) Star Tribune.

Though John Smith had become blind in his last year, he’d been active—or as active as a centenarian+ can be—up until he contracted the pneumonia that claimed his life. He would walk out to wave to the trains passing through his area. His mind was reportedly, and remarkably, clear. At the end of his life, he lived with a nephew, whom he adopted as his son, Tom Smith, who took care of the old man. While the day he left this Earth is indisputable, his birth date was also murky, especially at a time when records were scant, especially for non-whites. John Smith lived on Division Point at Cass Lake, in northern Minnesota, where he fished and rode horses, for all but a few years of his life. The Great Northern Railroad Company had a train turntable where they turned engines around at Division Point (hence its name).

John Smith would come out to the trains and sell pictures of himself for 5 cents on which he wrote his Indian name, his “white person” name, the location, and his age. In some of the pictures, he wears a traditional Indian headdress with feathers, poncho, and beads. In others, he wears a top hat or a jacket, vest, and cravat. On one picture from 1912, his age is cited as 128. A shock of white hair tumbles over his prominent nose and face, which is incredibly etched with deep wrinkles. 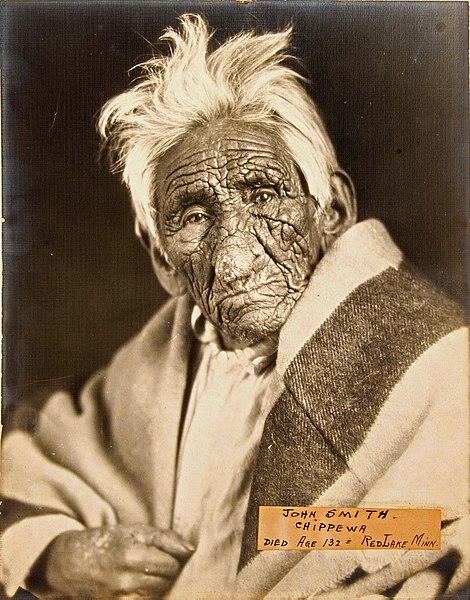 Chippewa John Smith. In this photo it says he died at the age of 132.

Smith told people that he’d been eight or nine years old “when the stars fell,” according to a University of Minnesota ethnographic biography of Paul Peter Buffalo, who’d been a child in John Smith’s circles. Some experts pin “when the stars fell” to the Leonid Meteor Showers of 1833, which would put Smith’s birthday in 1822 and make him 100-ish at the time of his death.

At the same time, he also claimed to have participated in the War of 1812, which makes his age in the 130-plus range more credible. A Federal Commissioner of Indian Enrollment, however, said Smith’s wrinkled face was due to a disease, not age. Paul Peter Buffalo reported that John Smith, whom he called “Grandpa John,” had been asked to become chieftan but had turned down the honor because he was “getting too old. He didn’t want to be responsible for anything.” How old can a man really live? The oldest verified age validated by modern standards, which requires at least three official documents, belongs to Jiroemon Kimura of Japan, who died on June 12, 2013, at the age of 116 and 54 days.

« A stroll 13,000 years ago: The earliest known human footprints in North America found on a Canadian island
The Oldest Couple to Ever Divorce – Due to Infidelity 60 Years Before »