Elvis Presley the karate master? Who’d have thought. Presley was a massive star with enormous enthusiasms. And we’re not talking about his fondness for peanut butter, banana, bacon, and jelly sandwiches

The hip-wiggling King of Rock and Roll, the best-selling solo recording artist of all time, was already a major star when he was drafted into the Army in 1958. During his two years of service overseas, he discovered twin and seemingly contradictory passions that would define the rest of his life—a taste for amphetamines and karate.

By the untimely end of his life in 1977, he was a seventh-degree black belt. But did Elvis have real karate chops, or was he just surrounded by celebrity’s inevitable yes-saying sycophants?

The year 1958 was pivotal in the life and career of Elvis Presley. Two years earlier, he had released his first single, “Heartbreak Hotel,” an instant hit. His “Hound Dog” gyrations on the Milton Berle Show and the Ed Sullivan Show had scandalized mainstream media and thrilled the teenage nation. He’d made his film debut in Love Me Tender. So when he was drafted, some questioned if he would even serve in the Army. Or if he even should, as the presence of a teenage heart-throb on base was sure to prove disruptive. Presley’s was no ordinary service: His arrival at Fort Chaffee, Arkansas, was met with screaming fans and frenetic paparazzi, who documented the requisite cutting of Presley’s pompadour. During basic training, he used a two-week leave to record five new songs. And it was also during training that Elvis’s mother fell ill and passed away, a loss that devastated her devoted son.

It was while stationed in Germany in late 1958 that Sergeant Presley got a taste for karate, when he saw a demonstration by Juergen Seydel, “the father of German karate,” according to Peter Guralnick in the biography Careless Love: The Unmaking of Elvis Presley. Elvis sought out Seydel’s studio in Bad Homburg, and with his fellow enlistee and best buddy, Rex Mansfield took lessons with Seydel twice a week. On leave in Paris, Elvis studied several hours a day for nine days straight with sensei Tetsuji Murakami, who’d later become the Shotokan master of Europe.

Elvis was soon “giving lectures on the discipline required to master the art of karate, and its superiority to other, cruder forms of self-defense” to anyone who’d listen, according to Guralnick. In Germany, a sergeant introduced Elvis to amphetamines, according to Guralnick, who loved them so much he passed them on to his teenage girlfriend, Priscilla Beaulieu, and his buddy Rex. “Elvis would say, ‘These little pills will give you more strength and energy than you can imagine.’ ”

Back in the U.S. in 1960, Elvis attended a Kenpo demonstration by karate master Ed Parker. The King humbly introduced himself, which made Parker laugh. The two chatted about karate techniques and about the influence of Elvis’s mother. Though they kept in occasional contact, it would be years before Presley studied with Parker.

Instead, Elvis turned to Henry “Hank” Slomanski, a Chito-ryu stylist who taught at Fort Campbell, Kentucky. Slomanski was a tough-as-nails Army Ranger with many medals and accolades and the 1953 karate champion of Japan who’d received the highest karate award ever presented to an American. Slomanski put Elvis through his paces, unimpressed with the King’s star power. At the end of six weeks’ strenuous training, Hank Slomanski awarded Elvis his 1st degree black belt, one of the only black belts he ever gave to a civilian. Elvis Presley continued producing hits, but the world of rock and roll was evolving, and a new breed of rockers were emerging, notably the Beatles and the Rolling Stones. Presley slipped quietly into substance abuse, toured erratically, and starred in many middling B movies.

Elvis staged a comeback in the late 1960s, with a special television show, commercially successful performances in Las Vegas, and sell-out shows around the country. 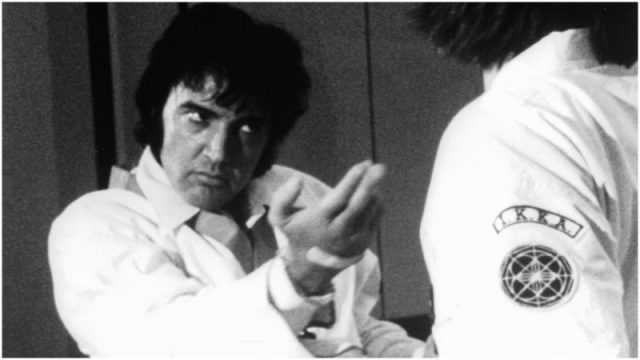 And in the early 1970s, he revived his interest in karate, studying under Master Kang Rhee in Memphis for four years. Though Elvis came to Master Rhee’s studio with his usual retinue, the sensei insisted that the superstar get in line with “regular” students in the dojo. In 1973, Master Rhee awarded Elvis his seventh-degree black belt.

The following year, Master Rhee collaborated with Presley and another karate mate, Wayne Carman, on footage for a planned karate documentary, The New Gladiator. Though footage still exists online today, the project was never completed. In 1974, Elvis also co-founded with a few of his karate pals the Tennessee Karate Institute in Memphis, where he continued to practice until his end. But his personal life was unraveling, and his onstage presence began to deteriorate, according to Rolling Stone. The press was not kind. “Elvis is fat,” The Washington Post declared in June 1976. “Not only is he fat, his stomach hangs over his belt, his jowls hang over his collar, and his hair hangs over his eyes.

One year later, to shock of millions of adoring fans, Elvis was gone at age 42. A renovated Tennessee Karate Studio re-opened last summer. If you embark on an Elvis pilgrimage to his fabled Graceland, you can take a tour of the studio for a glimpse into the King’s life as a world-famous karateka.

« 1st century A.D. mosaics and paintings buried under volcano damage now being revealed and restored with X-ray technology
“We want pockets”: The Rational Dress Society and its campaign for practical clothing for women »