There is a small town in western Arizona, relatively close to Fort Yuma, named Oatman, in honor of a girl of the 19th century named Olive Oatman. Most of her family lost their lives to Native Americans in 1850, and Olive went on to live two separate existences. In her “first” life she spent five years living among the Mohave, who took care of her. They inked a tattoo on her face and counted her as one of their own. In her “second” life, when she re-entered the settlers society, she became famous as the Mormon girl who made it back after spending most of her teenage years living with Native Americans.

Born in Illinois in 1837, Olive was among the seven children of Royce and Mary Ann Oatman. The family followed a splinter sect of the Church of Jesus Christ of Latter-Day Saints that was led by James C. Brewster and Jackson Goodale. Stating that he had received a revelation, Brewster declared that God had shown him the way to reach “the Land of Bashan,” a safe refuge in California where the Brewsterites could settle. Olive was 14 years old when the Oatman family joined Brewster on his journey West, a dangerous trip that most of them would not survive.

On reaching New Mexico, the wagon train divided in two.  Royce Oatman led the group which was to reach California through Tucson, via a more southern route. Reaching a resting point near Maricopa Wells, they received a warning the Native Americans in the area were known to be quite unfriendly, and it was not recommended the group should proceed that way. A tintype portrait of Olive Oatman

The majority of them heeded the warning, but the Oatmans went ahead with the original plan, to keep on this trail and rejoin the others. It turned out to be a decision for which the family paid with their lives. East of Yuma, the family crossed paths with a group, probably Tolkepayas Yavapais. Not many details are known of the encounter, but things escalated quickly–only three of the children survived the massacre that was to follow.

Olive’s older brother, Lorenzo, returned to the rest of the group to give an account of six dead bodies of his nearest and dearest, and that his sisters, Olive and Mary Ann, age 7, were nowhere to be found. No trace of them. The case would not be resolved for the next five years.

The two sisters were taken hostage in a Yavapai village in the area, and here they were treated pretty much as slaves. A year later, the Yavapai traded the girls with a Mohave tribe in exchange for horses. 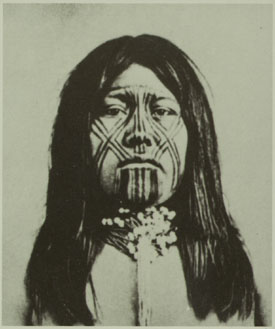 Among the Mohave people, Olive and her sister were seemingly treated as equals. Under the care of the tribal leader, the sisters soon adjusted to the Mohave way of life, wearing typical Mohave dress and given the freedom to farm their own food. The girls also received tattoos on their face and arms in accordance with the tribal customs, as part of their spiritual rite of passage. They were bestowed with the name Oach and grew very close to the family who took care of them. Not all aspects of the Oatman girls’ time among the Native Americans are clear, though. Some interpretations about this part of Olive’s life are contradictory, such as the claim that she was held against her will. Yet she and Mary Ann did not petition any of the 200 railroad surveyors who camped nearby to the village, mingling and trading with the Mohave for around a week in 1854, to help them. The girls might have thought at this point they only had the Mohave to count as their family; they didn’t know they still had a living brother out there, a link to the world from which they were violently abducted.

Mary Ann was one of the many villagers who died of starvation after a severe drought caused their crops to fail. Olive reportedly survived because her adoptive mother gave her food secretly. It was around the time that the girl turned 19 when word reached the village from officials at Fort Yuma; they wanted to know if there was any truth in the rumor that a white girl was living among them.

At first, Olive was hidden by the Mohave, who did not respond to the inquiry. On at least one occasion, they lied that Olive looked different from the other Mohave because she came from a distant tribe. But then came a threat to destroy the village if the fort did not receive an explanation. After much negotiation, it was ultimately ruled that Olive must leave and be repatriated with the whites at Fort Yuma. When she arrived at the fort, Olive was not allowed to enter until she had dressed in more “appropriate” clothing (her Mohave outfit was not much more than a skirt) and washed her painted face and dyed hair. But the tattoo remained on her face–the indelible reminder of five years spent living as part of the tribe, something which would turn her an instant celebrity the moment she appeared at the fort.

Olive’s reunion with her last remaining sibling, Lorenzo, made headline news. Some details of her first testimonies of what happened to her after the family was attacked contradict later recall of her experiences.

She eventually gave a series of lectures to support Royal Stratton’s book Captivity of the Oatman Girls, based on his interviews with Olive, from which we can assume she made an income. It was these talks that probably sparked some of the inconsistent rumors about her life.

Olive explained to her audiences that the tattoo was inked on her face so she could be easily identified if she escaped.  She implied that she was held in the village against her wishes, but in later instances she gladly remembered how well she was accommodated by her adoptive family. Part of the confusion might be that Olive may have referred to both the two distinct tribes, her captors and her saviors, as Apache.

Numerous newspapers of the day shared their own bit of Olive’s story–or printed scandalous stories that she had a “savage” husband. It could not have been easy to be the subject of so much attention while trying to readjust to her new life. Her tattoo marked her out in society as an outsider.

Olive Oatman eventually moved on, at 28 getting married to a rancher with whom she adopted a child. The family of three lived in Texas until Olive’s death from a heart attack in 1903. Her only contact with the Mohave was in 1864, when she met a tribal ambassador who was paying a visit to New York City. Perhaps the two discussed how good life was back in the village.

Sadly, she was quite unhappy throughout her adult life, suffering bouts of headaches and depression. Given all the trauma she went through, twice losing the family she loved, it is no surprise.

« The Seikilos Epitaph – Listen to the Oldest Surviving Complete Song in the World
In 1st century A.D., Hero of Alexandria designed the first vending machine–it dispensed holy water after insertion of a coin »