The Rise and Fall of the Last King of Hawaii

Well before the United States acquired Hawaii as the 50th state, the island enjoyed self-governance as the Kingdom of Hawaii. The kingdom, officially recognized as its own nation by several countries, including the United States, began its journey as an absolute monarchy when the warrior Kamehameha the Great waged a military campaign that would unify the islands in 1795.

Kamehameha’s dynasty would last on the throne until 1872, when King Kamehameha V died without an heir or naming a successor to the throne. By the constitutional laws that had been established in 1850, a special election was held by the legislature to select the new king. Two men were in the running, David Kalakaua, who was a prominent chief and leader in the community, and William Charles Lunalilo, a high ranking chief and cousin to Kamehameha V. 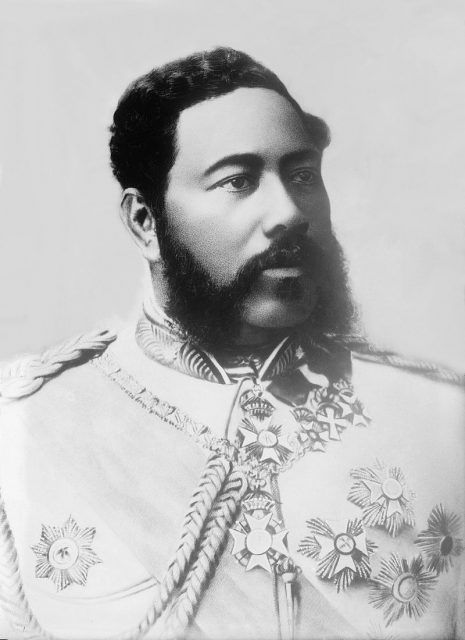 This election was a blowout for Lunalilo, as he was seen as the rightful heir due to his heritage. There had even been pressure for him to just defy the laws and declare that the throne belonged to him, but he chose instead to follow the rule of the land. He would become the King of Hawaii through a legitimate election process, leaving Kalakaua to rule primarily as the military chief for a short two years. 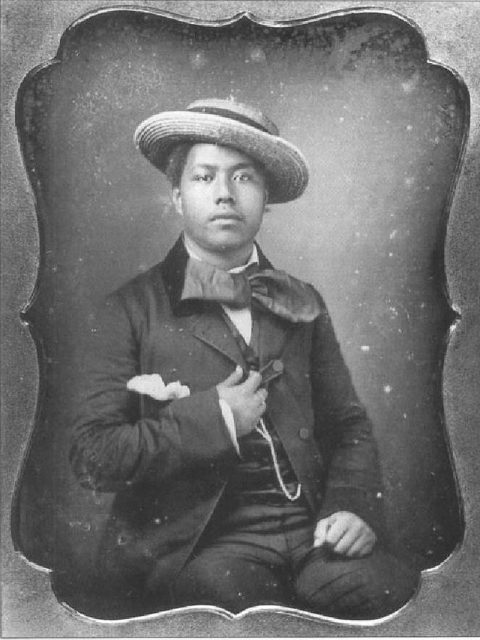 Lunalilo’s reign would not last terribly long, as he would fall ill in 1874 and die, leaving the throne empty yet again. Lunalilo did not have a clear successor chosen, although Queen Dowager Emma, widow of Kamehameha IV, claimed differently. She argued that Lunalilo had appointed her as the successor, but there was no one to back her words. Once again, a special election would take place to decide who would become the next monarch of the Kingdom of Hawaii. The country’s legislature would select Kalakaua as the next king. 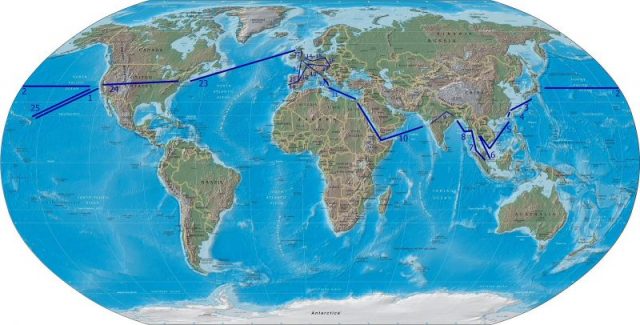 King Kalakaua’s reign as a true leader of the people would be relatively short-lived, but he was responsible for bringing unrivaled prosperity to Hawaii. While he was on the throne, he signed the Reciprocity Treaty of 1875, which opened up greater trade relations with the United States.

He also championed the concept of “Hawaii for Hawaiians,” fighting to preserve and encourage Hawaiian culture in spite of the growing foreign influence in the country. He spurred on public performances of the hula dance, which had been previously pushed underground due to the influence of Christian missionaries who believed the practice to be pagan. 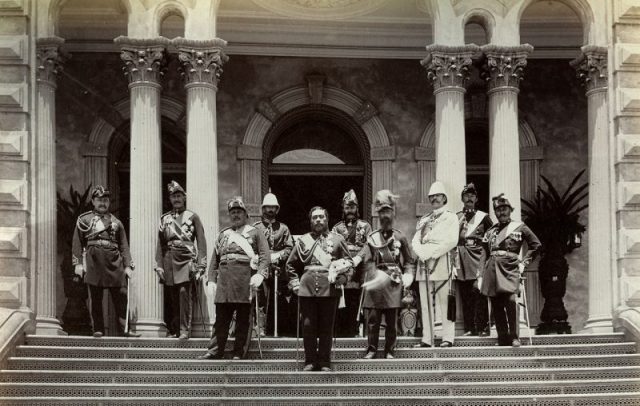 Kalakaua with his military staff officers, 1882

Kalakaua’s attention to performance arts, music, and dance as well as his friendly personality led to his becoming known by the moniker of the Merrie Monarch. He would go on to take a tour of the world, building up relationships with various nations in an effort to secure great prosperity for his kingdom.

In the process of this world tour, he was able to secure plenty of labor contracts for Hawaii. In spite of his work, critics could not help but notice that he was spending a significant amount of money on a trip that seemed to be more about seeing the world than supporting the interests of the people. 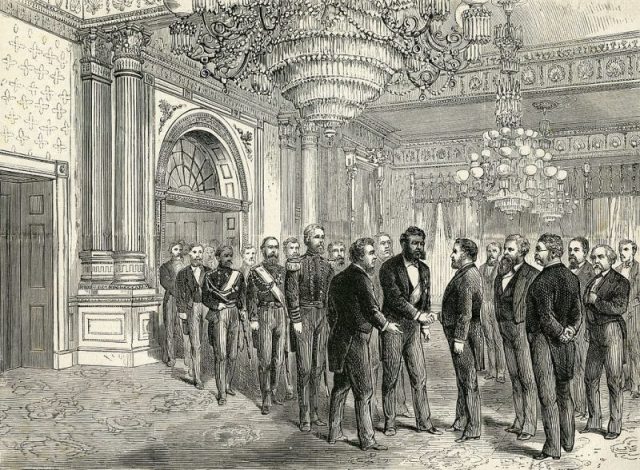 Between the world tour and his incredibly extravagant coronation ceremony in 1883, suspicion was beginning to bubble that there was corruption with Kalakaua’s court. The man in charge of the cabinet of the King, Walter Gibson, was seen to be a good friend to the monarch. This conflict of interest would lead to public criticism of Kalakaua’s cabinet by the press.

The final nail in the coffin for Kalakaua’s kingly authority was a scandal involving opium licensure. The right to sell and distribute opium had been restricted by the government to a single holder of a license. A man by the name of Aki was led to believe that if he were to properly bribe the king, he would be able to obtain the license and have a monopoly on Hawaii’s opium trade. While he discreetly sent the king $71,000 as a bribe to secure the license, Kalakaua was unable to secure the license for Aki. Another man, one who was on friendly terms with the king’s cabinet, had won the license. 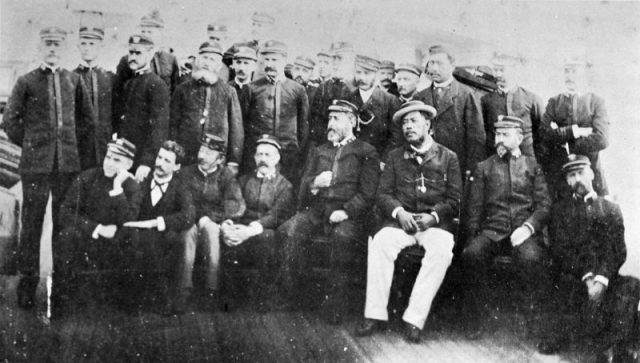 To make matters worse for Aki, not only was he refused the license, Kalakaua refused to pay him back, since the king was deeply in debt at the time and had used the money to offset his debts. This would lead Aki to make the story of corruption public, triggering outrage from the king’s enemies who had long been worried about Kalakaua’s reign. 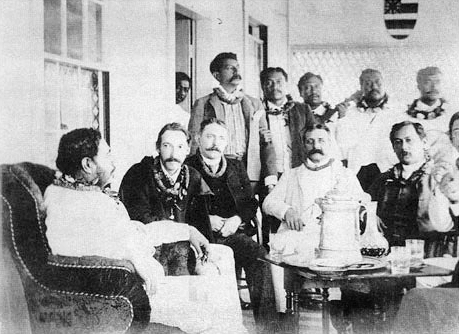 The Hawaiian League, an all-white coalition of mostly wealthy businessmen who had a controlling interest in the various businesses of the country, sought to disarm the power of the king so that they could eventually push a U.S. annexation of Hawaii. Rather than opt for a complete coup, they decided instead to reduce the powers of the king to that of a figurehead.

In 1887, the Hawaiian League, well-armed with a militia, ensured that the king sign a new constitution. This constitution, nicknamed the Bayonet Constitution because of the threat of force behind it, would essentially take the majority of the king’s powers away while ensuring that the Hawaiian League would be able to grow in political power by restricting citizen’s abilities to vote unless they had a certain amount of wealth. The absolute power of the king was gone and the legislature would have significantly more control over the country. 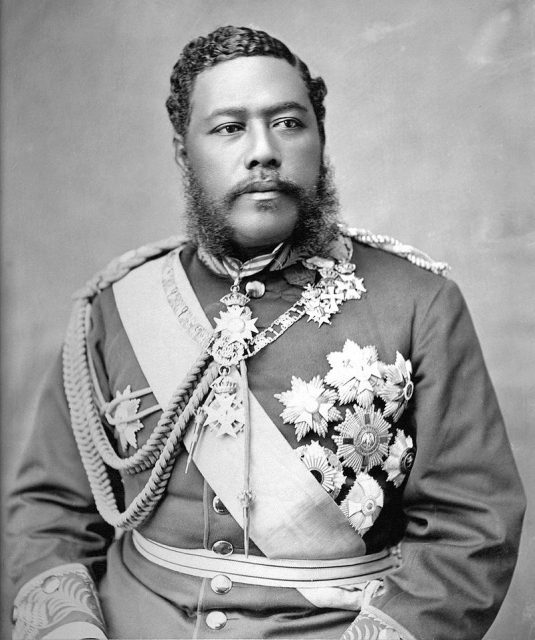 King Kalakaua backed up the new constitution, despite the fact that it was technically illegal since it hadn’t been ratified. He supported the Bayonet Constitution primarily out of fear of assassination. Despite protests from the citizenry, the king made no attempt to resist. His sister would become the last monarch of the Kingdom of Hawaii after he passed away in 1891. After that, a coup d’état would lead to the overthrow of the throne once and for all.

Related story from us: Sweyn Forkbeard: the king of Denmark ruled England for five weeks, but his bloodline can be found in today’s British royalty

While Kalakaua’s reign had been marred with scandal and corruption, he is still widely remembered for bringing prosperity and prominence to Hawaii, as well as the restoration of the hula dance.

« Celestia, Pennsylvania― a 600-acre property deeded as God’s land was home to a doomsday group and auctioned by the government when divine intervention failed to pay the taxes
The Crazy Brave Man who Removed his own Bladder Stone with a Kitchen Knife »