From tinkering with a grandfather’s pocket watch to launching a grand multi-million-dollar project, restoration can give a whole new lease on life to many things old. In England, the cost of the conservation of York Minster’s finest stained glass windows is $15.5 million (£11.5 million). A masterpiece, the Great East window has 311 stained glass panels and is often referred to as England’s Sistine Chapel. It’s also rated one of the top 10 most magnificent stained glass windows in the world.

Using the latest technology to provide the glass with a UV coating, the restoration will ensure the protection of painted artwork for generations to come. The final panel renovated was the Fifth Day of Creation. It portrays angels watching on as God creates birds and fish. Restoration is now complete, with a ceremony in May 2018 celebrating the great feat. 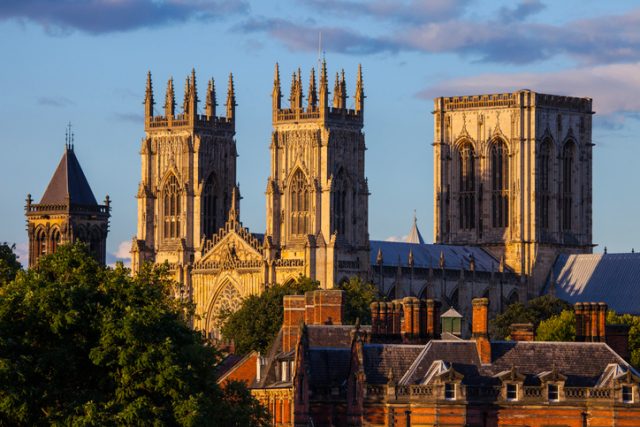 The window was the triumph of a master glazier and stained glass artist, John Thornton, and was created between 1405 and 1408. He received the princely sum of £56 for his endeavor. John Thornton has another claim to fame, as being one of the earliest named English artists. The stained-glass illustrations are a monumental representation of a biblical story, portraying scenes from Genesis to the Apocalypse, as depicted in the Book of Revelations.

The Great East Window is the U.K.’s largest medieval stained-glass window. Equaling the size of a tennis court, it towers majestically over the Lady Chapel. This is quite fitting, as this chapel is usually considered the largest and most elaborately decorated chapel in any Gothic Church. York Minster is one of the top five cathedrals in England, due, in no small part, to the magnificent Great East window. 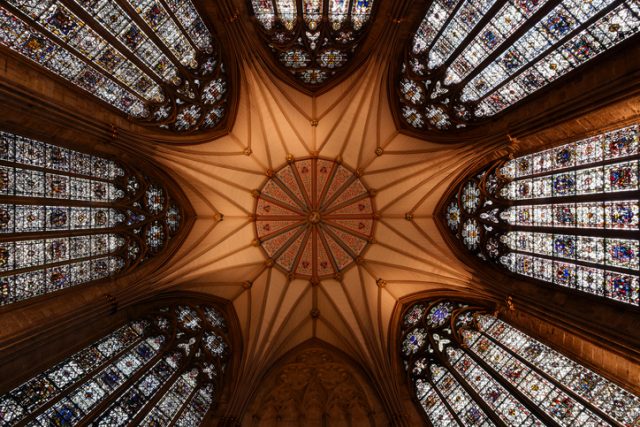 Hundreds of years of environmental factors have taken their toll on the medieval art. The elements, internal moisture, and air pollutants have all contributed to its decline. The innovative restoration of the 600-year-old window was a 10-year project. The restoration was set over two five-year phases, splitting the project due to its sheer size. Throughout the course of the delicate conservation work, many of its secrets have been unveiled. One remarkable find was fingerprints in the paint, believed to be from the original workers. 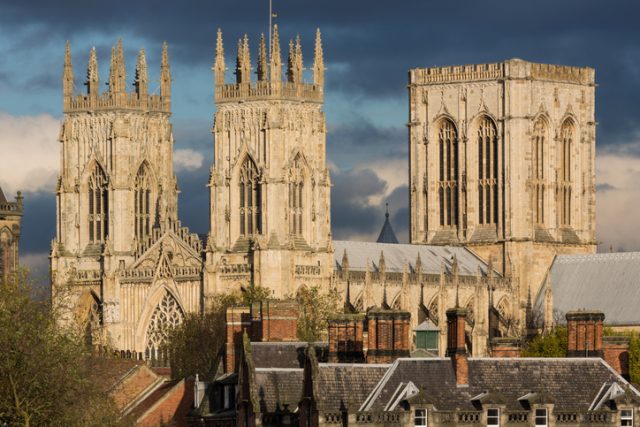 York Minster is home to 128 stained glass windows, each depicting many illustrations. One of the first that greets visitors as they enter from the busy city is the towering North Transept. This is also known as the Five Sisters. It is the world’s largest lancet window, with the largest expanse of ancient gray grisaille glass in the world. The window consists of five tall slender arched lancets, each more 53 feet high.

There are more than 100,000 individual glass pieces in this window alone, which had to be restored after World War I. It now serves as a memorial to the Commonwealth women who died as a result of the two world wars. There is an interesting speculation regarding the North Transept window; it is believed to have inspired the creation of the five sisters in the Charles Dickens novel, Nicholas Nickleby. 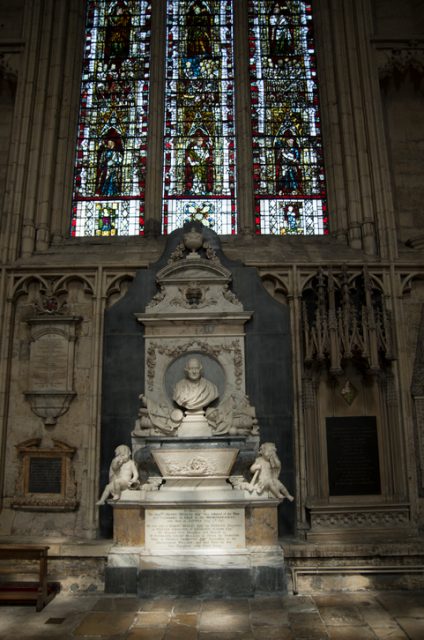 Inside of York Minster, the largest gothic cathedral in Northern Europe (York, England).

At the nave, one can view another of York Minster’s treasured stained glass windows: the Pilgrimage Window. Created in the early 12th century, it depicts pilgrims journeying to York. What marks this window as unusual are the illustrations in window’s margins. Artistic representations of animals re-creating human behavior, most especially the monkeys carrying a funeral brier, can be seen. 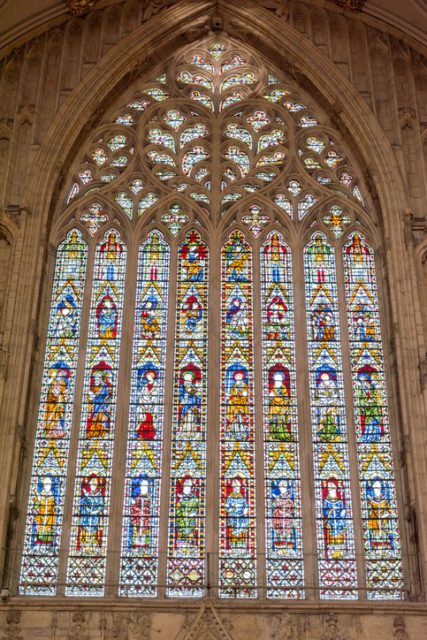 Other windows dedicated to saints have recently been renovated, including those depicting St. William of York (circa 1414) and St. Cuthbert of Durham, who was Bishop of Lindisfarne from 685 until his death in 687. Held within the Chapter House are seven stained glass windows depicting the legends of other saints. These include an illustration of St. Peter in a prison.

Some of the Minster’s remarkable windows are imports from the continent. The early 16th-century crucifixion window, with its striking blues, was acquired in the 19th century. It originated at the church of St. Jean, in Rouen, France. 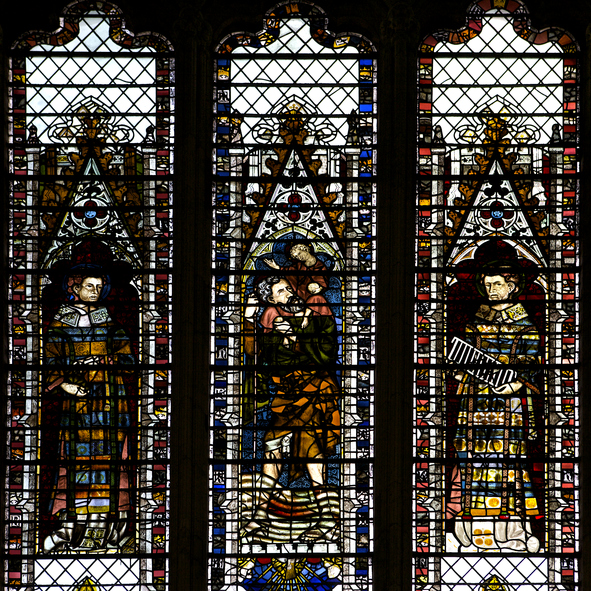 “Just one example amongst hundreds of the beautiful stained glass to be found at York Minster cathedral in York, UK.

The Great Rose window in the South Transept commemorates the end of the War of the Roses. It celebrates the union of Lancaster and York, with the marriage of Henry VII and Elizabeth of York. The glass in this window was damaged by fire in the 20th century when lightning struck the building and set fire to the roof. The glass in the 73 panels suffered over 40,000 cracks. After four years of restoration, and a cost of over $4 million, it was finally restored it to its former glory.

Other windows in the minister do not have such a long history. St Peter (1768), Abraham and Solomon (1780), and Moses (1793) were created by the 18th century stained glass artist William Peckitt. 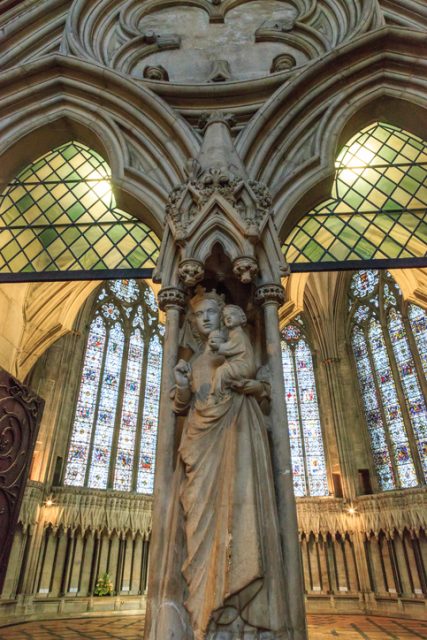 The York Glazier’s Trust continues its conservation of the stained-glass windows in the Minster. Yet the glass is only one marvel of this amazing cathedral. In the lower basement are monumental pillars and a large section of a Roman road. At the topmost region, standing some 235 feet tall, one can climb the 108 steps up to the tower. Once there, a grand view of York awaits, though this is not a climb for the faint-hearted.

Related story from us: The splendid glasshouse called Temperate House, part of the royal gardens at Kew, now open to the public

The City of York is steeped in history and traces its roots as far back to the Roman invasion of Yorkshire in 71 A.D. A Roman fort settled between the River Ouse and River Foss, named Eboracum, meaning “Yew Trees.” And so, the small town began to develop. By the 3rd century, the town had its first walls, built by the Romans. In 866 they were destroyed by the Vikings, who renamed the town “Jorvic.” The walls that stand today were not the originals; they were erected in the 13th and 14th centuries. The changes in the Anglo-Saxon letters, the Latinized name eventually became York.

The history of this city is lengthy and rich, and well worth a visit.

« The Hallucinatory Effect of Damp Rye Bread is why Witches are on Broomsticks
New research: Water may have arrived on planet Earth by way of asteroids »