A little vodka can apparently go a long way in Russia. A museum-goer took a sip too many and then by his account became “overwhelmed,” so much so that he tried to break the protective glass and deface an important piece of art depicting a moment in the country’s history.

The unfortunate painting, one that’s also a subject of ongoing political controversy in Russia, is the work of realist painter Ilya Repin and shows the infamous Tsar Ivan the Terrible holding his son’s body emptying of life.

The perpetrator used a metal pole to attack the painting at the Tretyakov Gallery in Moscow, a prominent fine art depository.

The painting, Ivan the Terrible and His Son Ivan on November 16, 1581, was finished in 1885–and ever since Repin’s work has been the subject of disagreement. 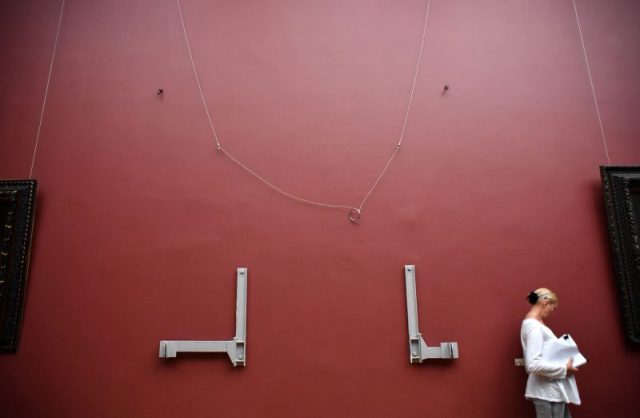 A Russian State Tretyakov Gallery employee stands near the blank space where Ilya Repin’s world famous painting of the 16th century Russian Tsar, titled ‘Ivan the Terrible and his Son Ivan on November 16, 1581.’ was exhibited in Moscow on May 28, 2018. – (Photo by Yuri KADOBNOV / AFP/Getty Images)

There are those who have denounced the historical facts the painting communicates–namely, that it was the tsar himself who took his son’s life. In the painting, depicting the aftermath of the event, the father appears deranged from the shock and despair over his killing his apparent successor to the crown.

In recent years, there has indeed been “a change of climate” regarding the painting’s interpretation in Russia, with seemingly more and more people who believe it is not true that the tsar committed such a horrible deed, and even that the entire notorious image of this tsar might be pumped by Western-fueled propaganda. 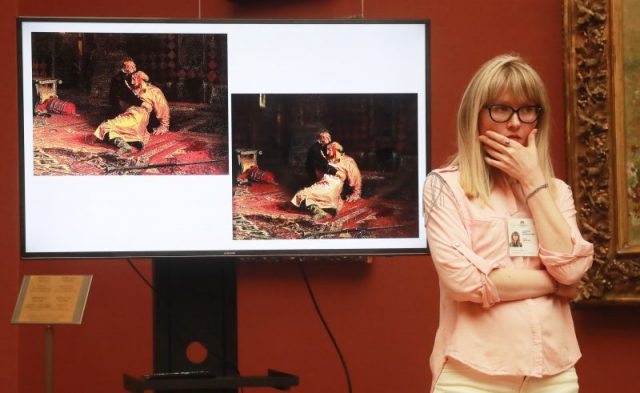 A screen shows Ilya Repin’s painting Ivan the Terrible and His Son Ivan, damaged by 37-year-old Igor Podporin of the city of Voronezh on May 25, 2018, during a briefing by the State Tretyakov Gallery; the painting was taken to the restoration. Sergei Fadeichev/TASS (Photo by Sergei Fadeichev\TASS via Getty Images)

The latest attack, which happened on May 25, 2018, might have been stimulated by such discussions.

The unnamed man, who carried out the attack just before the gallery was preparing to close, supposedly believed the picture unfairly portrayed the historical episode, some Russia media have stated.

The painting may be one of the most powerful ever to come from Repin’s brush, with some critics having said the eyes of the tsar can drive spectators to madness.

Notably, it is also the first painting in Russia that was subjected to censorship after Tsar Alexander III, who reigned during the 19th century, disliked the painting so much that he forbade it from being seen for several months after it was unveiled.

Clearly, the painting does not fail to evoke hard feelings today. 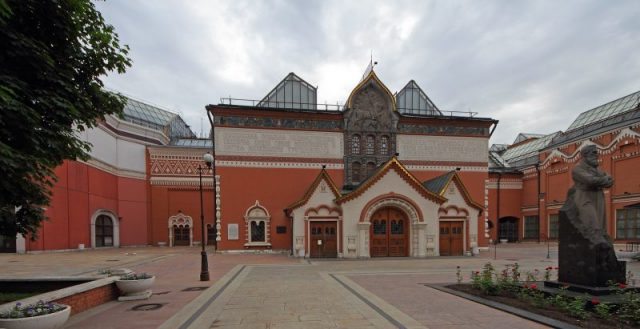 The Tretyakov gallery has commented on the shocking event. According to The Guardian, the gallery’s statement was that “serious damage was done to the painting. The canvas was pierced in three places in the central part of the work which depicts the figure of the Tsarevich [the tsar’s son].”

The shattered glass also damaged the frame, the gallery said, but they also expressed relief that some of the painting’s most worthy parts, such as the tsar and his son’s faces and hands, were spared from damage.

‘Museum of Selfies’ to open January 2018 in Glendale

Shortly after the incident, the man was arrested and detained by Russian police.

Authorities have confirmed that in his statements, the man confessed he became “disturbed” by Repin’s work after drinking a glass of vodka in the gallery’s cafe. A video in which he provides a statement was also published by the Interior Ministry. 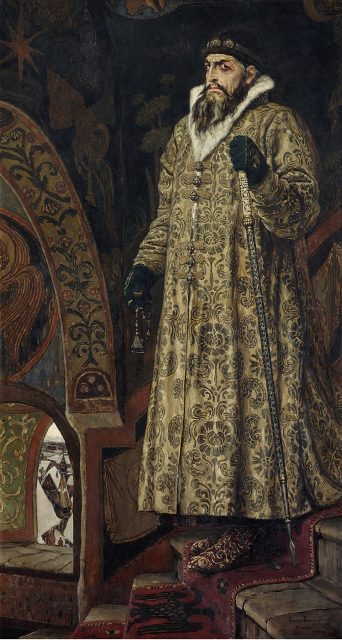 The man confessed to the police that he is aware of the gravity of his wrongdoing, as The Guardian reports: “I came to look at the painting,” he said the police, “I wanted to leave, but then dropped into the buffet and drank 100 grams of vodka. I don’t drink vodka and became overwhelmed by something.”

However, hopes are high that the painting will be restored after the attack, which is also not the first one in its over-a-century-long history. Repin’s piece was attacked in 1913 when a man who struggled with mental illness used a knife to sever the piece three times.

At the time of this first attack, Repin, still alive, offered to restore the piece by himself.

Reportedly, the artist left notes from the previous restoration effort that might help the one the painting will need to undergo in the present, an effort likely to take several years. 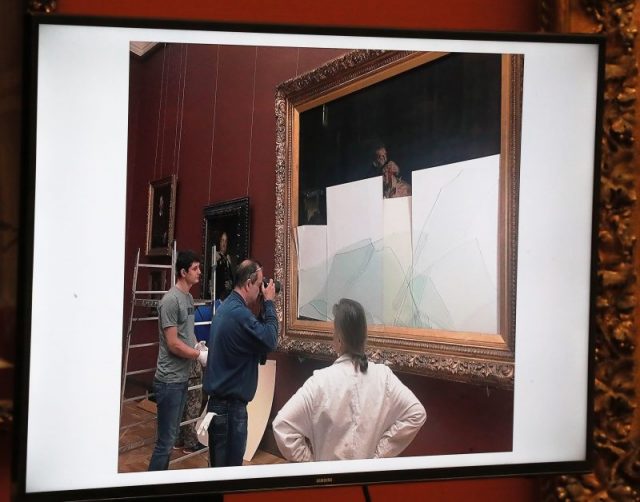 The painting, damaged by 37-year-old Igor Podporin of the city of Voronezh on May 25, 2018, was taken to the restoration. Sergei Fadeichev/TASS (Photo by Sergei Fadeichev\TASS via Getty Images)

Another attack on a painting in more recent history took place in 2012. A man caused a scandal in Ireland’s National Gallery after punching a masterpiece by Claude Monet, valued at $10,000.

The famed painting, titled Argenteuil Basin With a Single Sailboat, ended up with a huge hole in the middle of the canvas. Restorers applied “surgical” procedures to bring back the painting, and the wrongdoer was sentenced to five years in jail.

Related story from us: In one French art museum, more than half of the paintings are now believed to be fakes or forgeries

It remains to be seen what the court will ultimately rule for the attacker who defaced the painting in the Moscow museum.

Some Russian officials have immediately called for the “harshest” and “most severe punishment.”