A Japanese anime film that in the late 1990s found its way into the hearts of young audiences around the world is Princess Mononoke.

Studio Ghibli, which had released other anime classics such as Grave of the Fireflies and My Neighbor Totoro, decided to bring to the screen a story of man versus nature, exploring the tension between the “Forest Spirit” and inhabitants of the settlement of Irontown.

But the spirits did not come out of the blue.

Princess Mononoke creators were supposedly inspired by a very old forest that rises in all of its splendor on a small Japanese island.

The forest in question is located in the Shiratani Unsuikyo Ravine, on the island of Yakushima. This subtropical island is part of the Kagoshima Prefecture; it’s also one of the islands that compose the southernmost group of islands of Japan. 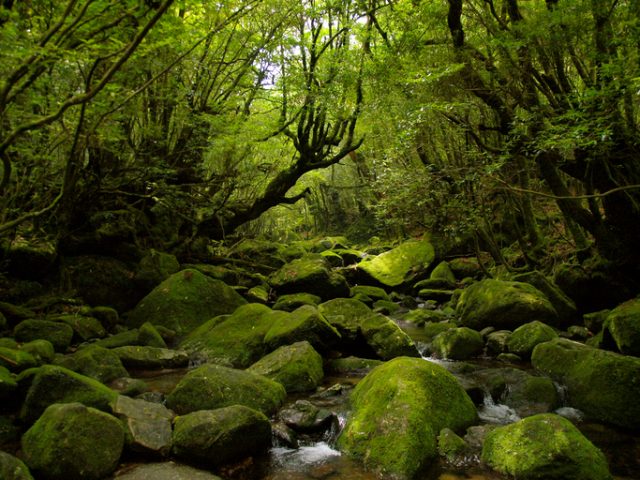 Yakushima is world famous for its extensive cedar forest, which shelters some of Japan’s most prominent and oldest living trees. Some of the trees, known as yakusugi (sugi means cedar in Japanese), are said to be over 1,000 years old.

Inside the stunning Shiratani Unsuikyo Ravine nature park, some of the first prominent yakusugi can be reached within minutes of walking. There are several well-maintained trails that snake through the park area and some have been walked for centuries, since Japan’s Edo Period (1603–1867).

Therefore, this is not only a walk in the forest–it is a walk through history too. 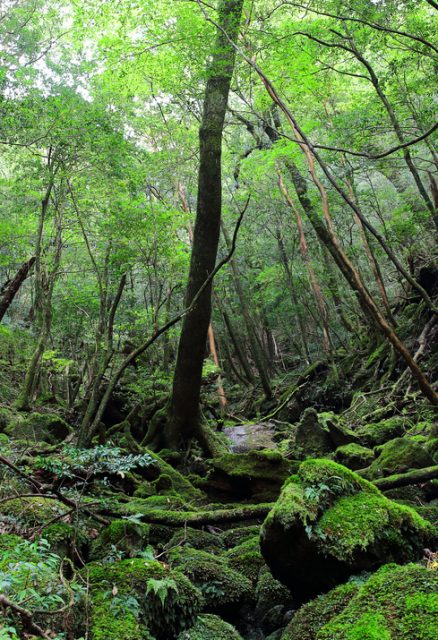 The Shiratani Unsuikyo Ravine occupies some 1,050 acres of the island’s territory, and at its highest point, it reaches an elevation of 4,265 feet above sea level. A few mountain peaks rise higher in other parts of the island.

One of Shiratani Unsuikyo’s most precious gems is a section of mesmerizing thick, dense woods–most of which is invaded by moss–that inspired Princess Mononoke‘s director Hayao Miyazaki and the project’s main artist, Kazuo Oga.

Oga spent hours of his time there simply drafting the forest as he carried out preparations for the big project. 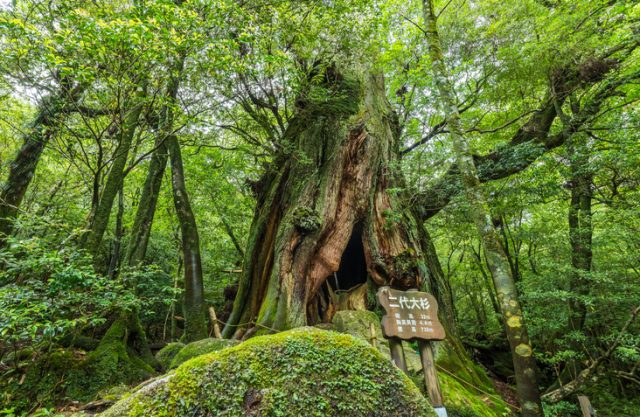 Yakushima Island is located in Kagoshima prefecture, southern part of Kyusyu, Japan. There is a subtropical zone and it’s covered by an extensive cedar (sugi) forest. This stump is called NIdai-Ohsugi in Shiratani Unsuikyo Ravine.

The name of this moss-rich forest in Japanese is kokemusi-mori. Not only the moss, but the entire ambiance of the woods, the stirring shades of green, as well as local stories of forest spirits, were unquestionably an inspiration for this classic in the Japanese anime list.

Rumor has it that animators back at the studio needed to use 200 different shades of green in order to properly depict the wood’s spectacular deep tones. 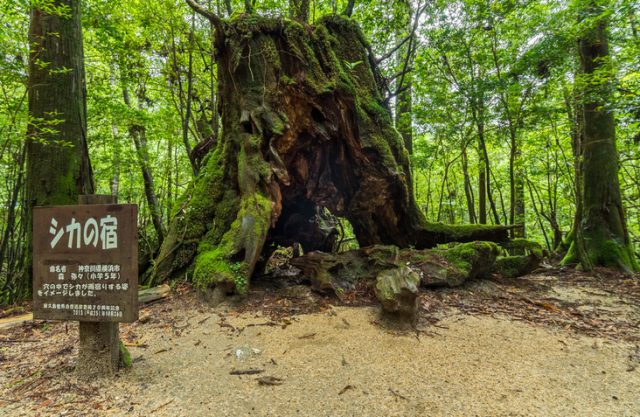 Close to kokemusu-mori is one more must-see place: Taikoiwa Rock. From here, island-goers can observe the surrounding giant granite rocks and also enjoy a breathtaking sight of Yakushima Island below. 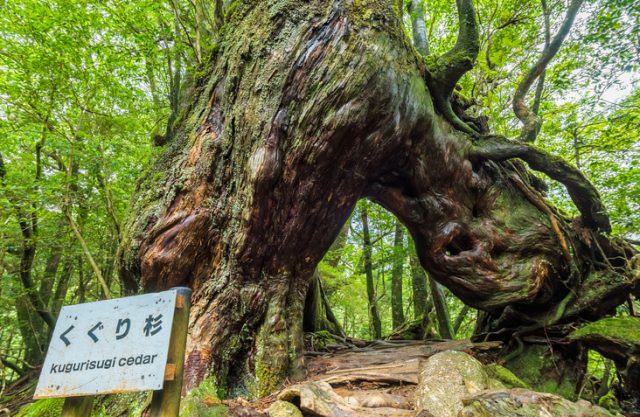 This big cedar (sugi) is located in Shiratani Unsuikyo Ravine. Its origin of “u201cKuguri”means go through a cedar for trekking.

While the entire island and its forests today appear to be well preserved and taken care of, it was not always like that.

Particularly not in the days of the Edo Period, when logging threatened the ancient cedar trees. Cedar shingles were popular as a low-cost roofing material. 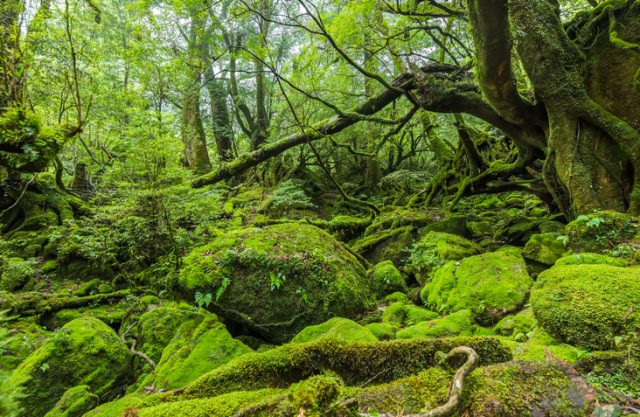 This mystical forest was used for the animated movie “Princess Mononoke”u201d, directed by Hayao Miyazaki.

In modern times, the forests have been entirely reclaimed under special preservation programs and are now protected as part of one of Japan’s national parks.

The majority of the island’s visitors nowadays come to Yakushima to experience the sight of the age-old cedars. As this is a subtropical island, with its tall mountain peaks, Yakushima is also known for its rainfall. 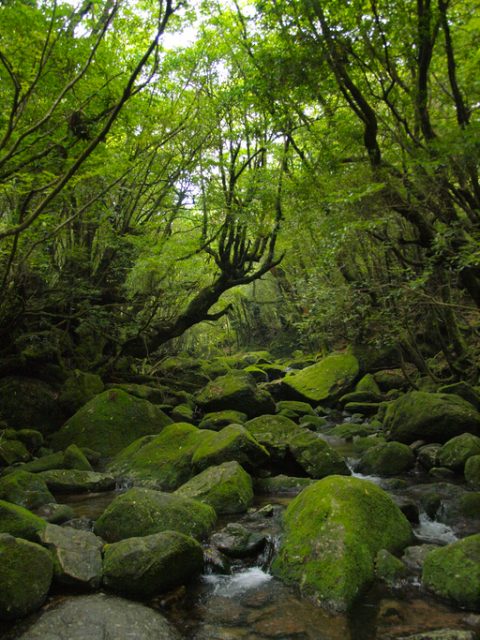 One local saying is here it pours “35 days a month,” and as much as that is a slight overstatement, frequent rains should be expected by visitors who want to see some of the special spots around the island.

Related story from us: Sherwood Forest: A place for not only Robin Hood but also the Vikings

The farther one gets in exploring the island, venturing deeper into the forests, the clearer it becomes why this corner of the world inspired brains of the caliber of Hayao Miyazaki and Kazuo Oga.

« Outrageous! Victorian women in swimwear
Are you lost deer? The deer that still won’t cross the German border »