Elvis Presley’s contract and diamond ring fetch more than $35,000 each at auction

A contract and a ring: good for a king. Elvis Presley’s diamond-encrusted lion ring and his very first contract recently sold for more than $35,000 each at an auction of his memorabilia.

The items are “fantastic pieces of iconic showbiz memorabilia,” said Andrew Aldridge from Henry Aldridge and Son, the U.K. auction house that handled the sales, according to the BBC.

“The prices achieved reflect the importance of their history with regard to the king of rock and roll.”

Presley’s first Las Vegas contract was generated by the William Morris Agency on the 16th day of April, 1956, agreeing to render “services as musicians … under the leadership of ELVIS PRESLEY” for two weeks at the New Frontier Hotel. 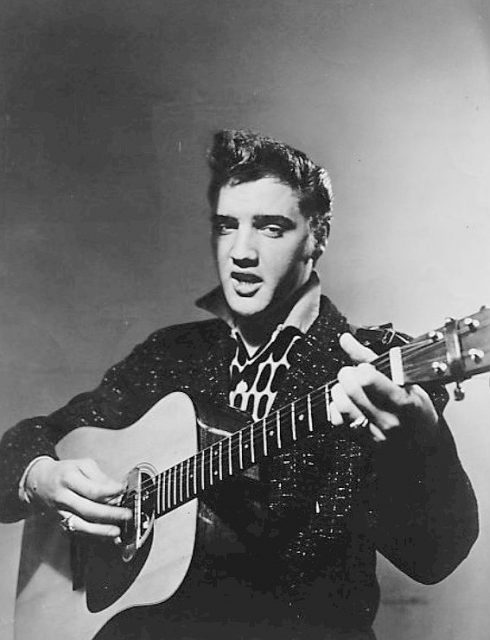 That might not sound like much for the King of Rock & Roll, but the CPI calculator shows that amounts to $70,145 per week in today’s dollars. Not a bad sum for a week’s work.

In contrast, by the time he returned to Las Vegas in 1969 at the height of the hip-wiggling hysteria, Presley received $1 million for four weeks.

The “employee” also got one “complimentary small suite and one twin bedroom” during the engagement. The contract bears the signature of Elvis Presley along with an initialed rider. 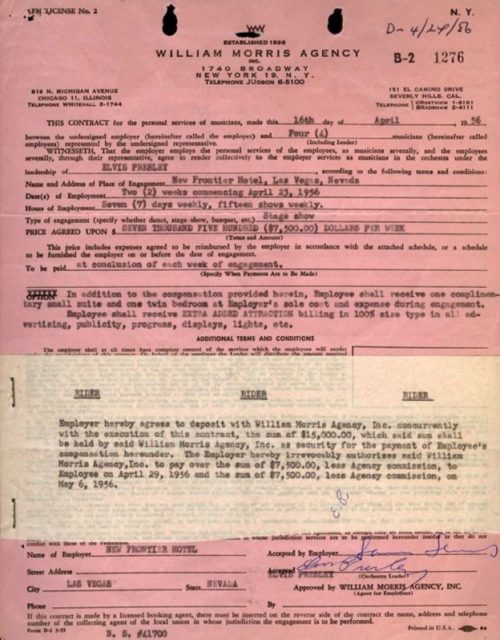 Presley performed his first shows in Las Vegas in April and May of 1956, before the peak of his fame, and so he didn’t face the kind of hysteria that his later appearances would generate.

“This was still the early part of 1956 and Presley was on the verge of greatness, up until now Elvis had performed in front of screaming teenagers but things would be different in Las Vegas,” Henry Aldridge and Son said in a statement, according to the New York Post. “Compared to the usual teenage hysteria, however, Elvis had a lukewarm acceptance from the middle-aged audience.” Indeed, Newsweek reported that he went over like a “jug of corn liquor at a champagne party.” 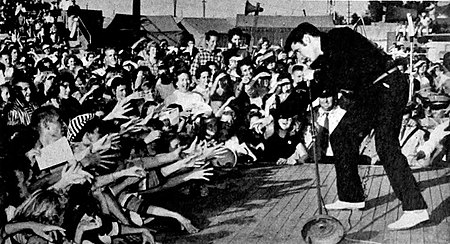 Presley performing live at the Mississippi-Alabama Fairgrounds in Tupelo, September 26, 1956

Presley’s iconic single “Heartbreak Hotel” had been released in January 1956 and became his first number 1 hit. His debut album was released in March of that year. In November, he made his film debut in Love Me Tender. Two years later, he was drafted into the military.

While the contract is a neat bit of early Presley legalese, the ring is perhaps more symbolic of the King’s public persona and private passions. 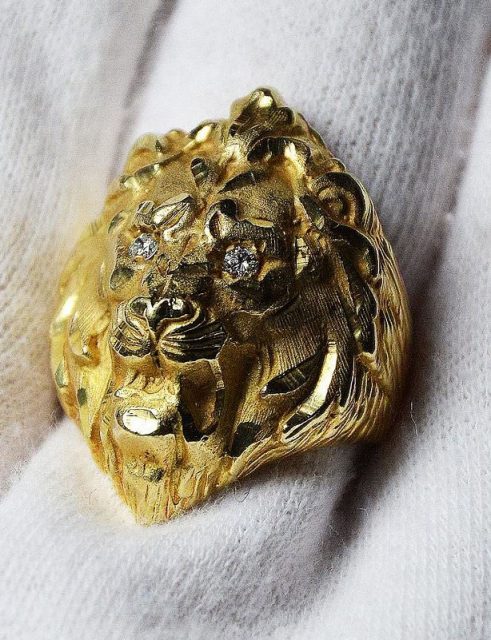 Undated handout photo issued by Henry Aldridge and Son of Elvis Presley’s lion head ring worn by him in 1972 which is expected to fetch up to £35,000 at auction. PRESS ASSOCIATION Photo. Issue date: Thursday June 14, 2018. The ring is stamped 14k gold and is accompanied by an Elvis Presley Museum certificate of authenticity, signed by the star’s friend, Jimmy Velvet. See PA story SALE Elvis. Photo credit should read: Henry Aldridge and Son/PA Wire

The 14K gold ring is a lion’s head, with diamonds for its eyes. The King of Rock & Roll was said to be attracted to the majestic cat’s symbolism as the king of the beasts. He wore it in 1972 at his home in Graceland, according to the auctioneers.

The Aldridge auction house did acknowledge that the ring had been damaged. “One night at Graceland, Elvis dropped the ring on the floor and one of his ‘Memphis Mafia’ members accidentally stepped on it and smashed it,” the house said in a statement. The ring was accompanied by a certificate of authenticity by Elvis’s friend Jimmy Velvet. It was, however, never repaired. 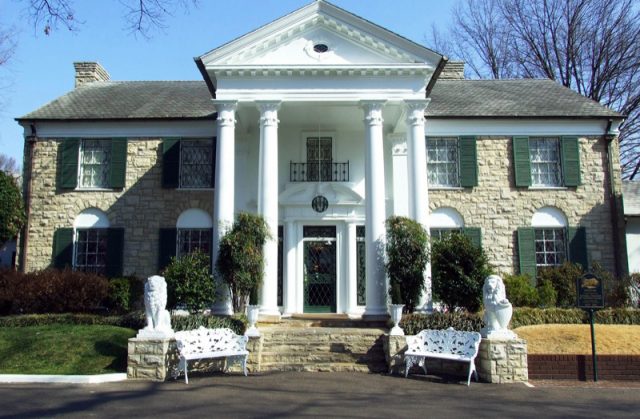 Graceland, the home of Elvis Presley. Photo by Joseph Novak – Flickr CC BY 2.0

The King was chatting with family, slipping the ring on and off his finger, when he dropped it on the floor. Lamar Fike walked in the room, stepped on it, and bent the band.

“Elvis handed the ring to his cousin and told her to have the ring fixed. He told her that she could keep the ring if it couldn’t be fixed,” the Aldridge statement read, according to Fox News.

“The ring was never repaired and had remained in the possession of Elvis’ cousin until the ring and this story was turned over to the undersigned.” 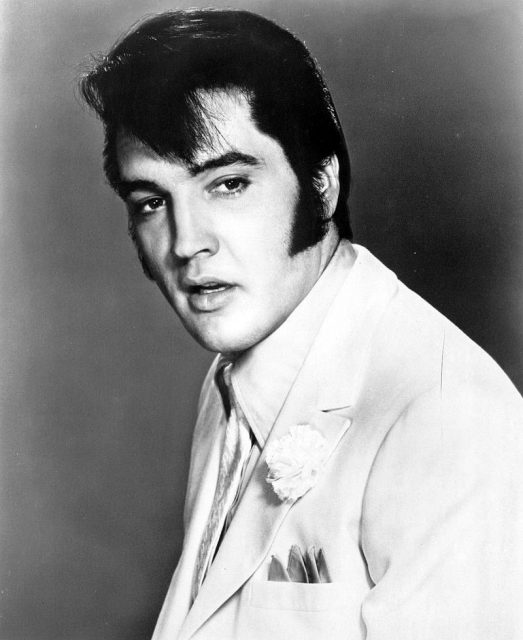 The year 1972 marked the point where Elvis Presley’s life began to unravel: He and his wife, Priscilla, separated, and were divorced a year later. Soon thereafter, his health began to deteriorate. 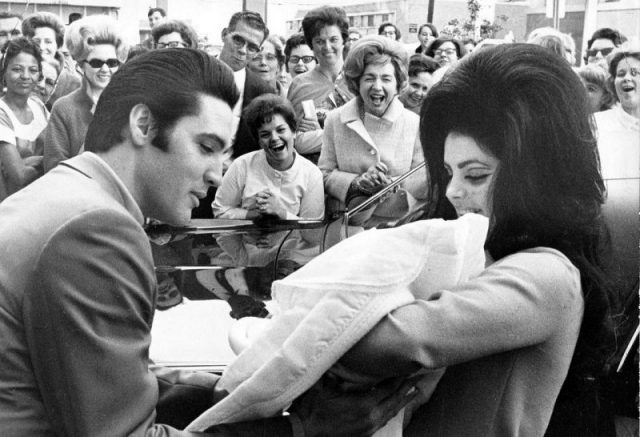 His drug addictions took a toll on his body, and he grew fat. He slurred his speech, he fell while on stage, and he overdosed more than once. Sadly, he had become a symbol of the sometimes perverse effects of fame and fortune.

Elvis Presley died of a heart attack in 1977. The era-defining global superstar was just 42.