Hundreds of documentaries have been filmed and books have been written proposing different theories on the origins of Stonehenge, the landmark site on Salisbury Plain, England.

Thousands of visitors flock to see and experience the mysteriousness of this place each year.

There is even an amusing song by Norwegian duo Ylvis in which it is wondered “What’s the meaning of Stonehenge?” The comical singers also ask why the monument was built 5,000 years ago, who built it, and very importantly, how it was built “completely without the technology we have today?”

Some of these questions have been answered, with a general consensus reached among most scholars. The stones at Stonehenge have been carbon-dated to around 2500 B.C. 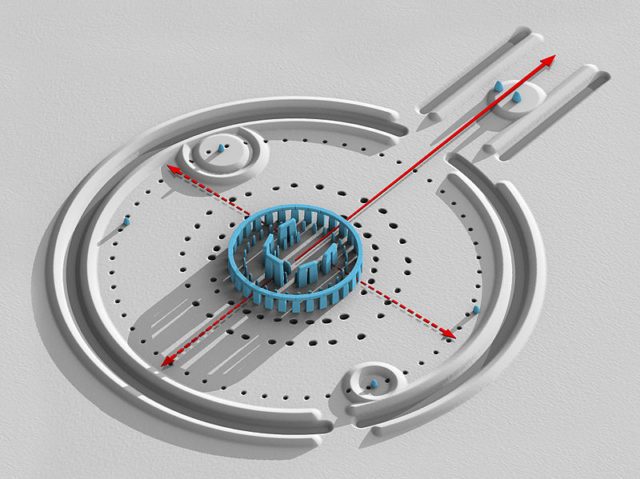 Computer rendering of the overall site of Stonehenge, indicating the main axis which points towards the midsummer sunrise.

Many experts seem to be attuned to the idea that Stonehenge was built as a holy burial site.

But the most puzzling part remains: how it was built without the advantages of even basic technology like the wheel.

Not only the are the stones gigantic, but most experts agree that the bluestones, which weigh up to 4 tons, were quarried approximately 150 miles away, in the Preseli Hills, Wales. The larger sarsen standing stones are each approximately 25 tons and most likely came from Marlborough Downs, 20 miles to the north of the site. 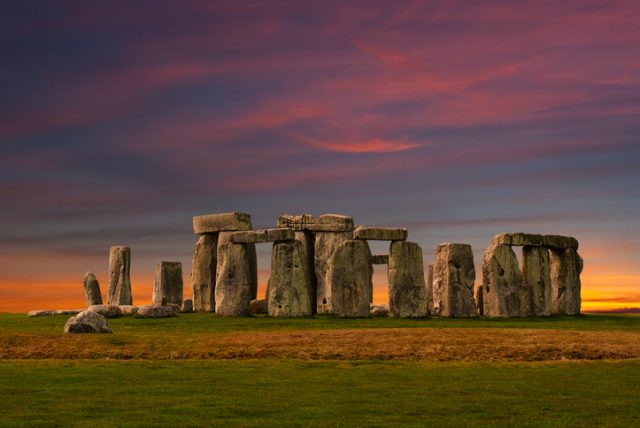 Photograph of Stonehenge at sunset

How could these stones, weighing tons, possibly be transported such a great distance five millennia ago, then immovably stood upright? Different parties have offered different answers.

A team from the University of Exeter has reportedly analyzed age-old stone balls which were found in the proximity of another ancient stone circle site in Scotland.

The researchers postulated the ancient builders at Stonehenge could have used similar balls of stone or even wood, as well as large grooved planks, to slide the gigantic stone slabs from Wales to Salisbury.

The ancient engineers may have also used oxen, the team theorized, and this way they would have managed to transfer each of the rocks from the quarry to the Stonehenge site in a matter of two weeks, progressing some 10 miles a day. 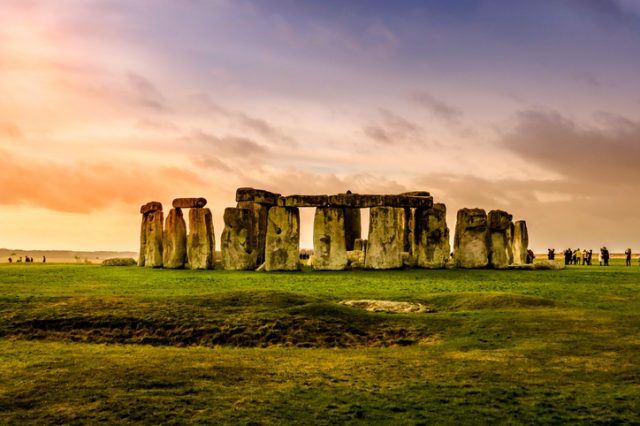 Many other answers have been offered, such as the idea put forward by a retired carpenter and construction worker from Michigan, Wally Wallington, a man who doesn’t own a formal university degree in any science. However, his way of moving big rocks and other hefty objects seems pretty fantastic.

In 2003, to the amusement of his family and the wider community, Wallington began building a full-scale concrete-block replica of Stonehenge at his property using just sticks, stones, and gravity as his tools. 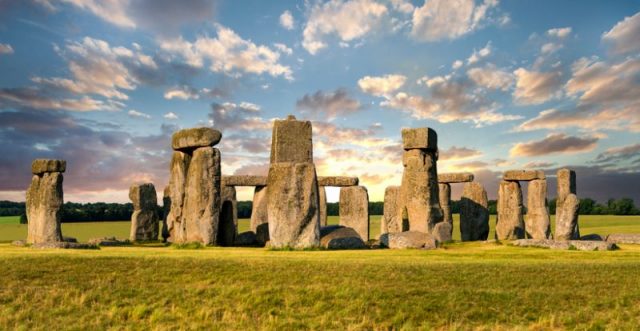 The light-bulb moment that started it all was when Wallington considered that placing a small stone underneath a large, heavy block, and finding the right point of balance would enable him to spin the block. Using his lifetime of knowledge, he knew that by adding a second well-placed stone underneath and attaching a sturdy lever to the block, he could do something even more remarkable.

In his experiments, Wallington was able to “walk” a one-ton block at a rate of around 300 feet per hour — by himself. If there was a group of people, the entire job would have run much faster. 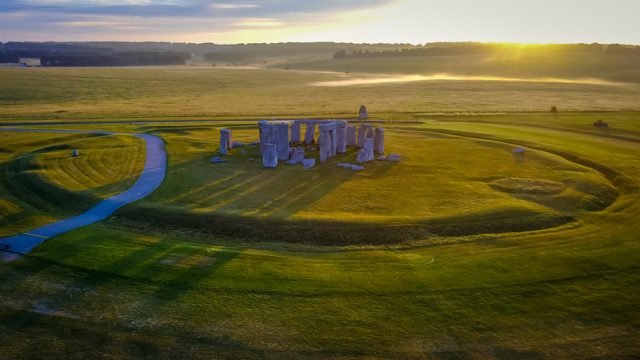 But this still doesn’t solve the problem of moving the 25 ton blocks that make up Stonehenge over miles of rough and uneven ground.

However, Wallington has a solution to this part of the puzzle. His cleverly engineered wooden road has bumps the same width as the block of stone. Once set in motion, the design uses the momentum and weight of the rock to keep it rolling. In this way he envisages that the ancient construction workers could have shifted the stones across the hills from Wales to Salisbury with (relative!) ease. 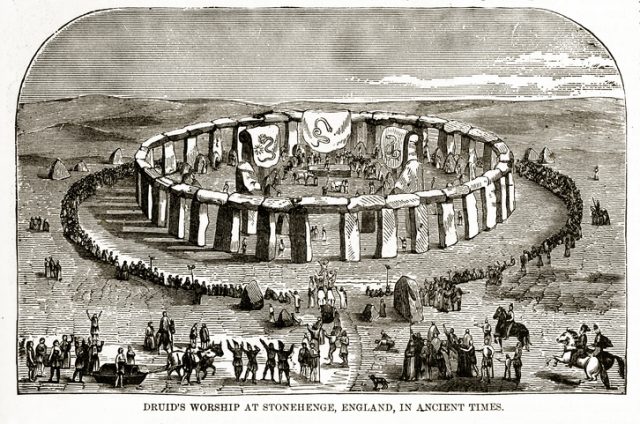 Rare and beautiful illustration of Druids Worshiping at Stonehenge, England, in Ancient Times. Engraving from The Popular Pictorial Bible, Containing the Old and New Testaments, Published in 1862. Copyright has expired on this artwork. Digitally restored.

The Michigan man has also tried to answer how the ancient constructors could have possibly raised the giant stones toward the skies. Wallington can be watched on YouTube demonstrating how the Stonehenge standing stones might have been raised into position. He again makes use of the stone’s own weight and a fulcrum of wood planks to slowly elevate the block, then tip it into the desired position.

Wallington’s effort has been compared to another intriguing structure that was erected in Florida during the first half of the 20th century. Edward Leedskalnin was a Latvian-American sculptor, engineer, and theorist. The son of a stonemason, he arrived in New York in 1912 and moved to Florida 10 years later. Here, he constructed Coral Castle. This monument too employs huge pieces of rocks and was built by Leedskalnin single-handedly using techniques that he kept secret.

Perhaps even more amazingly, when he moved to a new home 10 miles away, he brought the stone megaliths with him. 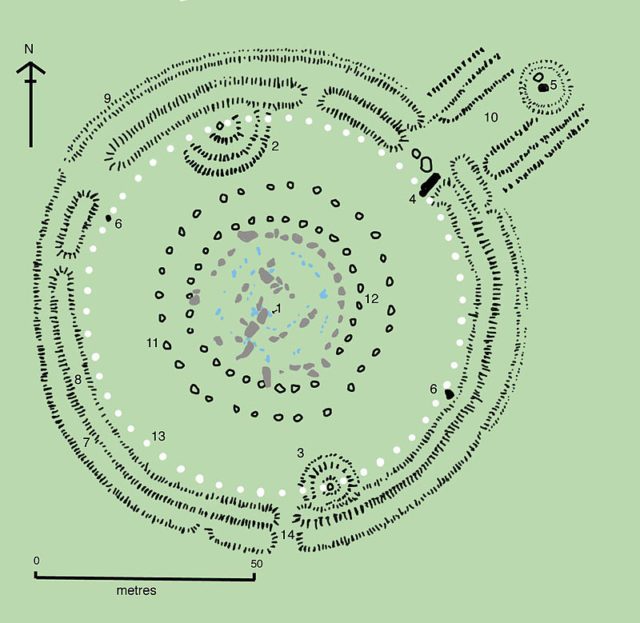 Wallington believes hat his method could even have been used for erecting other world-famous wonders, such as the Egyptian pyramids. For building the one in Giza, he has calculated it would take him some 25 years and approximately 640 workers to complete the mission.

We might never be sure if the people who built Stonehenge indeed used a method similar to that of Wallington. However, since the Michigan man has shown how he can manipulate large blocks and position them just like the ancient standing stones, we cannot exclude it as an option.

« Cuba’s vintage car culture in pictures
The “lost” cosmonauts – are they still out there? »