“From shrines dotted throughout Brazil to T-shirts, political banners, and beauty salons, Anastácia gazes at the world through the prongs of the metal mask that encloses her mouth. Often a penetrating and preternatural blue, the eyes of the black slave woman seem to communicate that which her shackled lips cannot” – Escrava Anastácia: The Iconographic History of a Brazilian Popular Saint, Jerome S. Handler’s and Kelly E. Hayes.

It’s a strong and powerful introduction to a study about a legend praised now as a symbol of black pride and heroic resistance in Brazil. A divine figure, according to some who see a powerful saint in her.

For decades now, the name Escrava Anastácia has been the focus of debates and the center of a growing religious and political movement in the country.

Facts about her existence are scant, to say the least. Most simply refuse to accept she even existed. Even the Catholic Church does not officially recognize her as a saint.

Nevertheless, Saint Escrava Anastacia, or “Anastasia the Enslaved one,” has been the object of affection and devotional practices in Brazil and gained a cult following.

She’s an icon to pray to for the poor, the beaten, the devotees of the Afro-Brazilian religion Umbanda and the Brazilian Spiritist Movement, viewed as a protector saint of the descendants of slaves by millions. 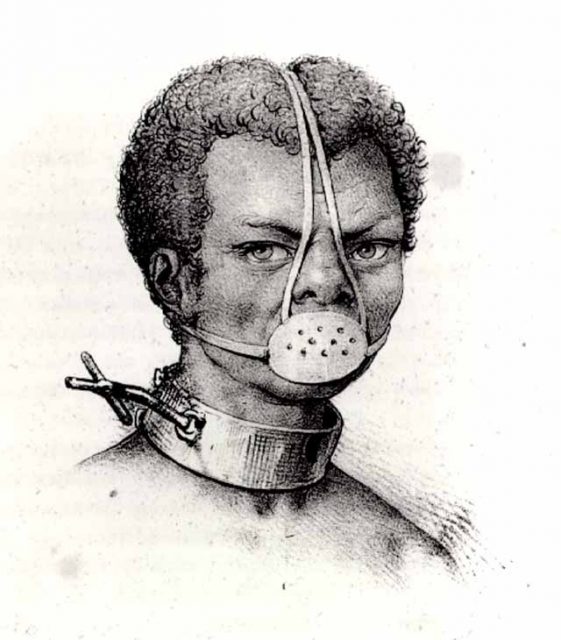 And it all started with an old painting, a small church, and a watercolorist as mysterious as a painting he left behind.

Little is known of his life, however, it is recorded that he arrived on the shores of Brazil sometime around 1817, and once again in 1820, during his travels around the seas between Australia and South America.

Devastated by what he came to witness on both occasions, he drew a quite extensive and extremely unpleasant collection of sketches depicting the life and the misery of the African slaves–some with collars around their necks and iron masks over their heads, allegedly forced on to them to stop them from hiding or swallowing gold nuggets. 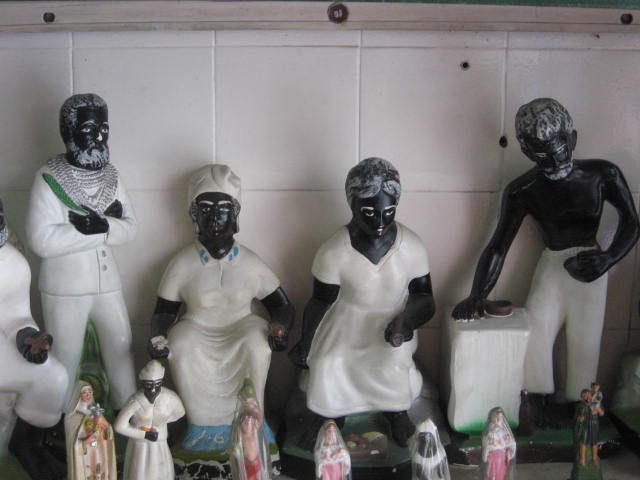 Or if not that, he noted, then to prevent them from killing themselves to escape their misery by eating dirt from the ground.

“I have seen two Negroes whose faces were covered with tin masks (masque de fer-blanc) with holes made for the eyes.”

“They were punished in this manner because their misery caused them to eat earth to end their lives,” he wrote in his 1822 Promenade Autour du Monde Pendant less Année, an illustrated publication in which he illustrates and explains his observations of the enslaved men and women in Rio, Brazil.

He would later explain in his expanded version of 1839, Souvenirs d’un Aveugle, that it was widely accepted practice by slave masters to put on a mask on their slaves to prevent them from killing themselves and escape punishment as masters reasoned. 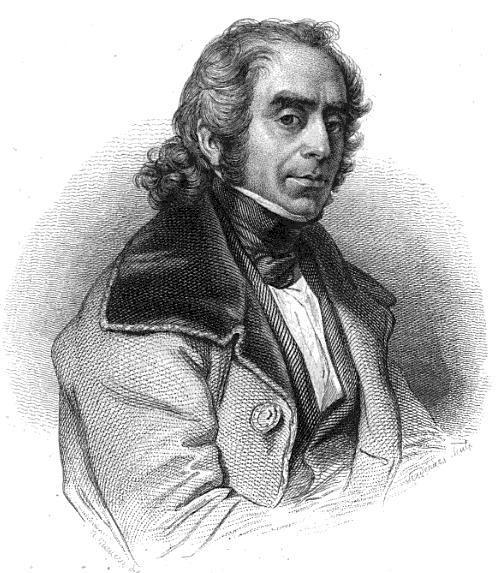 In truth, the slaves who were most likely suffering from nutritional deficiencies according to recent studies, where eating dirt to survive and not starve to death.

Anyhow, among this not so precious but historically indispensable art collection was an image of a man with piercing blue eyes, a collar around his neck and a brutal, savage, muzzle-like facemask.

Captioned “Chatiment des Esclaves (Brésil)”–Punishment of Slaves (Brazil)–there was no explanation provided to the picture, except that it depicts a man enslaved. 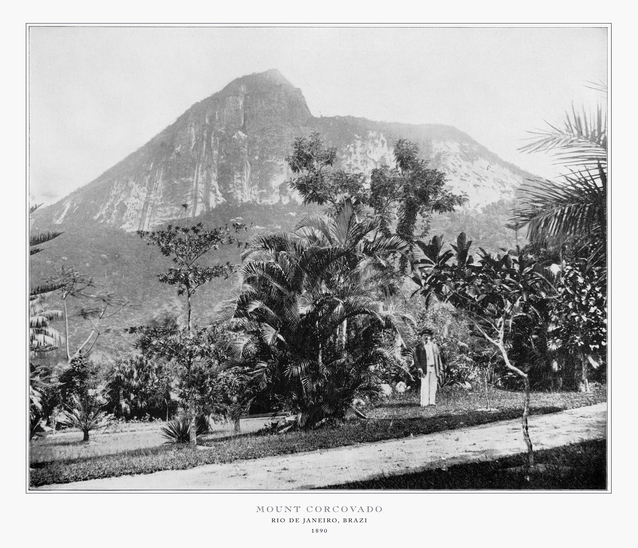 An explanation arrived a century and a half later in 1968, when an exhibition to celebrate 80 years of the abolition of slavery in Brazil revealed a copy of the image engraved at the back of the Church of Rosario in Salvador, Bahia.

It became obvious to all who witnessed it that this was not a man but a woman. And not just any slave, but Escrava Anastácia, the martyr, they argued.

The blue-eyed Nigerian beautiful princess who was kidnapped and brought against her will to Brazil by a cruel master who all the time made sexual advances on her.

She never gave in and repealed them all in absolute defiance according to the story, for which she was tortured and “confined to a face mask.” 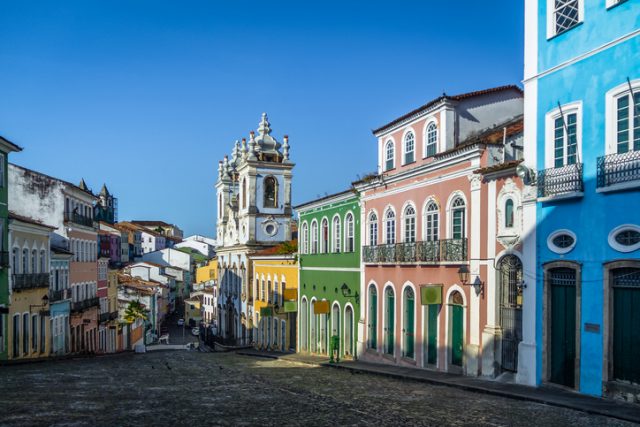 Another story goes that she was not a Nigerian princess but an enslaved lady from Angola sold to Brazilan family.

Defiled by her overseer and other white men on her master’s property day and night she never let anyone dare to kiss her or touch her lips.

She was forced to wear the mask and the collar as punishment for her strong will and determination to stay innocent to the end as much as she can. The collar pierced her throat eventually, and she died of gangrene as a result.

Other variants suggest she was born in Brazil, not Africa, and her mother was, in fact, the tortured one. 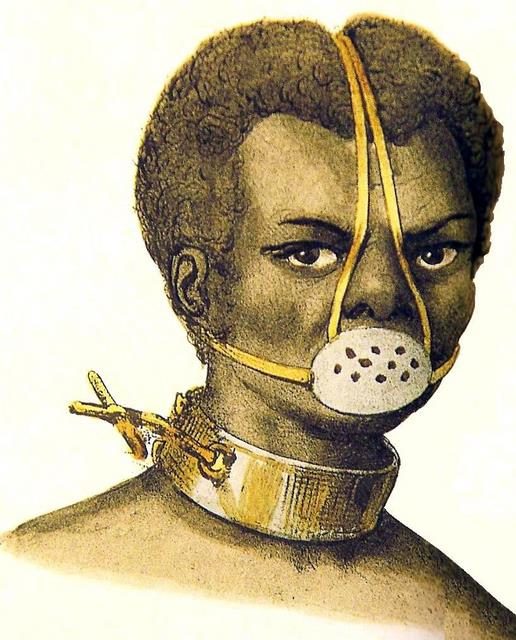 Anastácia was a black-skinned blue-eyed child, which was taken as evidence of what white men did to a woman enslaved. Evidence for infidelity as well.

She was sent away immediately to another plantation where just the same, her mother’s fate awaited her.

The owner’s son, Joaquin Antonio, was going mad about the attractive slave that she grew to be, and the free women hated her for it.

According to Carlos de Lima, a famous historian from Brazil, her mother, named Delminda, was a royal descendant of Galanga of the Nigerian Bantu tribe and Anastácia fell victim to these accusers who convinced Antonio that she was aiding other slaves to escape from the plantation. 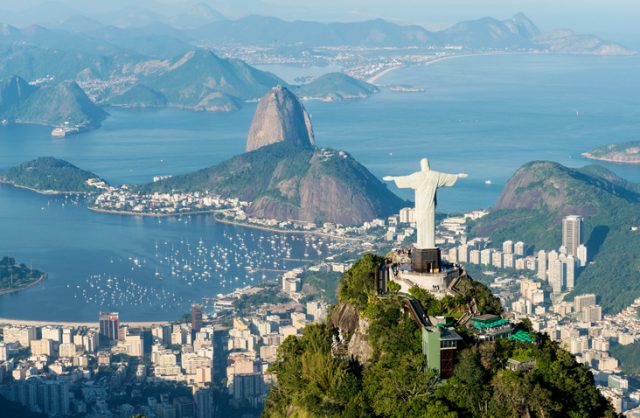 These are only a few of the many stories in which folks that pray to her believe.

Whether they are true or not is still up for debate, as is her existence for no one up to this day has offered hard proof to back up any of the versions.

Most recently she was the subject of interest for Jerome S. Handler and Kelly E. Hayes, who conducted a study on the African diaspora for the Virginia Foundation for the Humanities in Charlottesville, Virginia, and the Department of Religious Studies at the Indiana University in Indianapolis, Indiana.

The examined the history of this image in an attempt to find out who this mythical figure really was. The woman that many believe is the slave with the iron mask in Victor Arago’s picture, and that found in the small church in 1968. 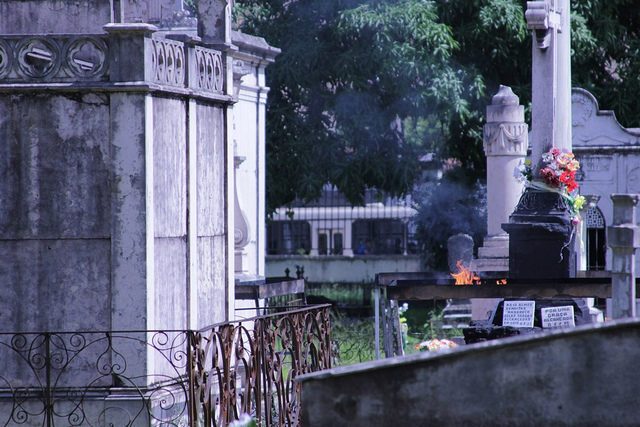 Anastacia’s monument is located in Cemitério da Soledade, in Belem, Para, Northern Brazil. The cemetery was built in 1850, deactivated in 1880, and remodeled in 1913. Photo by Pedro Belasco/ FLickr CC By 2.0

They came to the conclusion that most likely she wasn’t. Nevertheless, they do try to point out that perhaps this martyr lady personified in Arago’s picture was “a product of Brazil’s particular history and contemporary realities.”

For what is worth, the name, Anastacia means Ressurection in Ancient Greek. So perhaps she doesn’t represent an individual, but the suffering of a population.

And female in particular to represent those most exploited, ignored and forgotten for centuries, unfortunately until very recently, a full century after the abolition of slavery in the country.

A dirt road runs through Pará state in northern Brazil, where many Brazilians claim to have been forced to work in slave-like conditions.

In 1987 a man was found, according to a television news broadcast in Rio, operating a farm with all his workers chained day and night.

Allegedly he lured them in through advertisements in the press of prosperous work opportunities and made slaves out of them once they arrived at his premises.

So in a way perhaps St. Anastacia is not outright fiction. Maybe she is a combination of many sad fates that are true and got lost but were part of the lives of nameless individuals who suffered as this unofficial saint did. 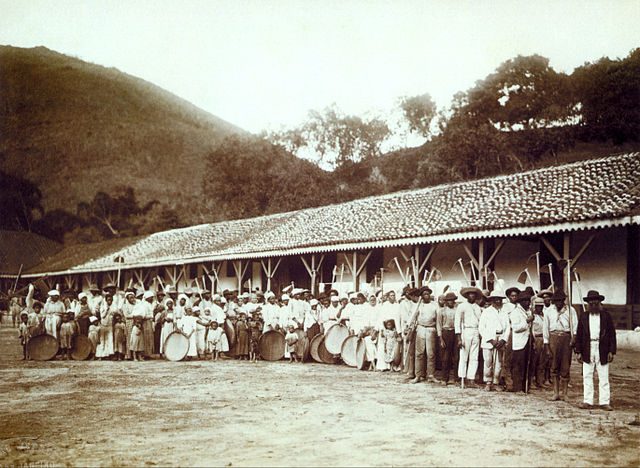 After all, what every single story has in common, despite all the differences in all these versions about an enslaved, sexually exploited woman, who endured great hardships and a brutal death, is the very thing people praise her for: her martyr-like persona and the manner in which she conducted herself despite extreme difficulties and slavery.

Her devotees worship her for her relentless spirit. For her “stoicism, serenity and virtuous suffering,” wrote Handler and Hayes.

“Anastacia, Anastacia, holy Anastasia. You who were borne by Yemenja, our mother. Give us the strength to struggle each day, so we may never become slaves. So that, like you, we may be rebellious creatures. May it be so. Amen” – Popular prayer to St. Anastacia.

« Supercentenarians: the ‘Superhumans’ born in the 19th century who only recently departed
“Scandalous” women who changed society »