On April 26, 1913, most of the shops and businesses in the Southern states were closed as it was Confederate Memorial Day, a day on which people pay public respect and honor to the armed forces of the Confederacy.

On that same day, in Atlanta, Georgia, the light in one of the offices in the National Pencil Company was still on and inside, superintendent Leo Frank, a young Jewish Cornell University graduate, was industriously working on his financial report, calculating and sorting the monthly wages of the company and delivering them to employees.

Later, the 13-year-old Mary Phagan who was working for the National Pencil Company for only 10 cents per hour, entered the office to obtain her wage.

The tragedy that came next caused shock and serious disturbance in Georgia, and all over the United States. Mary Phagan was cold-bloodedly murdered on her work place. 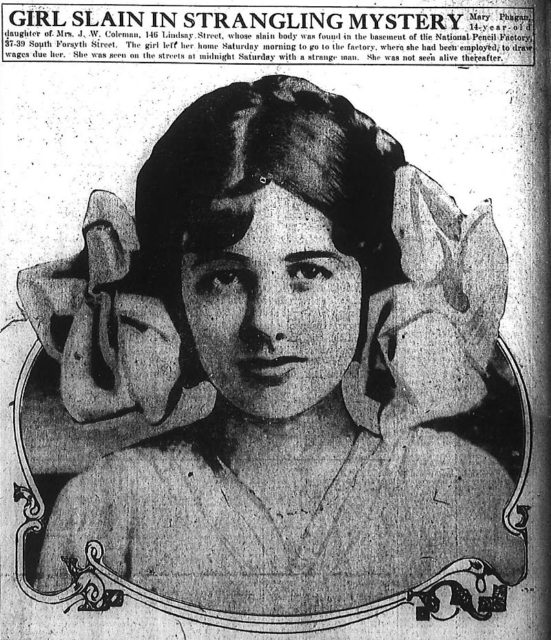 Mary Phagan as shown in The Atlanta Journal.

This ferocious incident prompted a thorough investigation which aimed to find her killer and was followed by a trial, serious public outrage and finally, lynching of Mary’s killer.

The tragic end of Mary Phagan was just an extension of her ill fate, that raises the question of why would a 13-year-old girl work in a factory instead of living an ordinary life, as many of her peers at the time?

In 1913 Atlanta faced great economic change when the agrarian economy was replaced by an industrial one and thus, the city transformed into a hub for transportation of agricultural products. 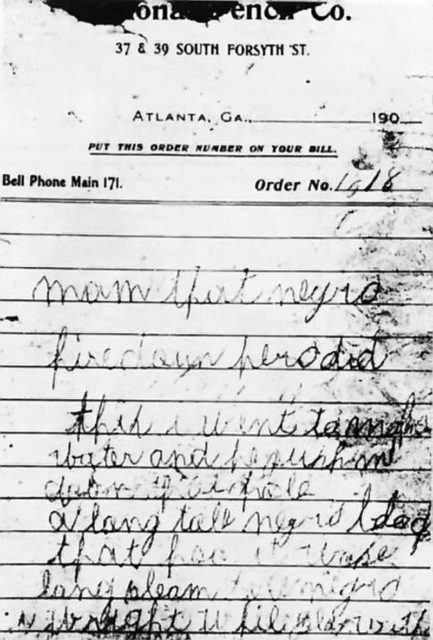 Most of the factories and companies exploited their workers and forced them to work under substandard conditions, depriving them of adequate sanitary facilities or proper heating and cooling systems.

On top of everything was child labor which, according to the newspaper Atlanta Georgian at the time, was the worst in the entire state regarding the working standards of child-workers who were often employed from the age of ten.

Exploitation of child labor was a common practice in the early 20th century and was supported by businessmen of various countries and religions, though the American Populist Party always pointed its finger to Jewish businesses as the main culprit regarding this matter. 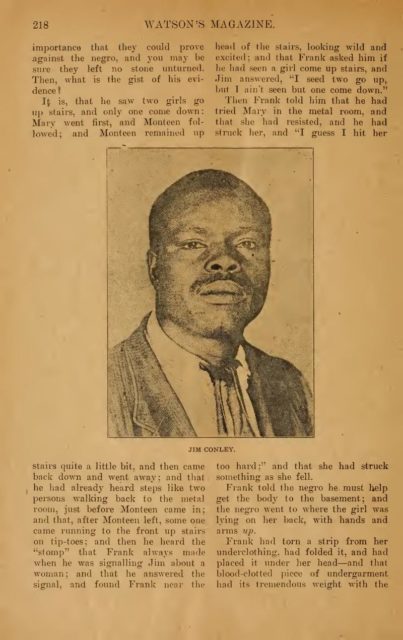 Jim Conley as shown in the August 1915 issue of Watson’s Magazine.

It didn’t take long before the investigators of the Phagan’s case indicated their first suspect. Of course, it was Leo Frank. He wasn’t the only one, though, as the second suspect was an African American named Jim Conley, the company’s sweeper who was present at the factory on the day of the murder.

Initially, Conley denied any involvement in the tragic event. However, the intense interrogation changed the course of Conley’s story and his statement turned the attention of the inquiry to Leo Frank, his employer.

When Frank was interrogated, he denied Conley’s version of the story and blamed him for fabrication. According to Frank, on April 26th, Mary Phagan arrived at the office, collected her wage and left. 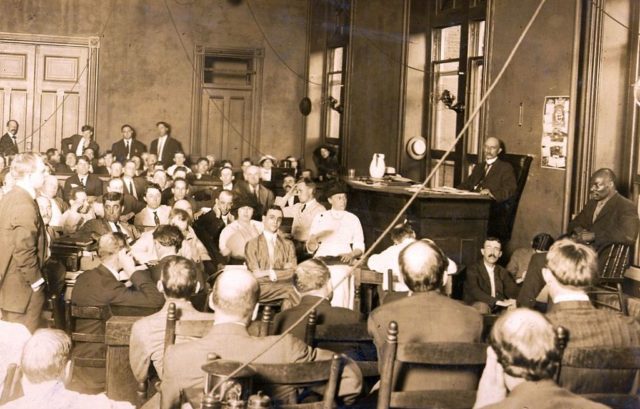 The courtroom on July 28, 1913. Dorsey is examining witness Newt Lee. Frank is in the center.

He then finished work and went home. Nevertheless, his alibi proved insufficient and, at the trial, Frank was found guilty by the jury. The result was a life sentence with hanging.

This atrocious murder stirred up the public and the media which frequently reported on the “Leo Frank case” to be an anti-Semitic statement. The New York Times and Collier’s Weekly argued for Frank’s innocence blaming the authorities for cutting corners towards the verdict.

Although most Georgians felt that justice would finally be served by an execution, the Northerners criticized Frank’s sentence as a futile attempt by Georgia’s authorities to make up for their inability to find and prosecute the person who was truly responsible for Mary’s death. 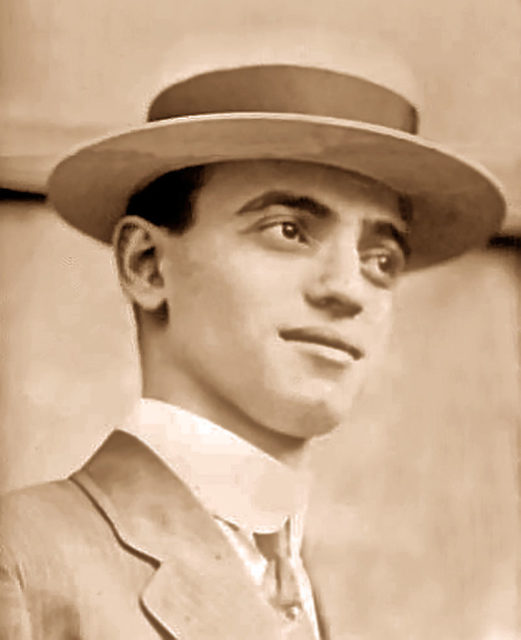 Frank’s legal support appealed the death sentence and succeeded to scale it down to life imprisonment. This fueled a group of men, who went by the name of “Knights of Mary Phagan,” to threaten to harm Frank and deliver their own form of justice.

On August 16, 1915 Frank was kidnapped from prison and lynched the next day. Before he took his final breath, he pleaded that his wedding ring be given to his wife.

Many historians attribute the aftermath of the Leo Frank Case to the support of the Klu Klux Klan. The mysterious circumstances regarding the murder of the young Mary Phagan remain debated to this day. On the other hand, this criminal case initiated the formation of the Anti-Defamation League which was formed to fight anti-Semitic policies.

« Freud analyzed Da Vinci’s subconscious through his painting “The Virgin & Child with Saint Anne”
How a geography graduate caused the demise of a 4,900-year-old tree »