The Alfred Jewel: Dazzling Anglo-Saxon Treasure Found in a Field in the South of England

Archaeological discoveries of the Anglo-Saxon world have provided useful insight into the treasuries of this eminent historical period. One significant yet mystical treasure from this era is the Alfred Jewel.

The Alfred Jewel is a 9th-century object that was commissioned by King Alfred who later used it as a pointer to help with reading the Bible and other religious texts. At the time, these were copied by hand and often difficult to read. Alfred ordered these texts to be distributed around his kingdom because he considered them to be sources of enlightenment.

The intricate piece was created by an artisan who worked under the patronage of the West Saxon court. The base of the jewel is in the form of a dragon-like head with a socket for its mouth. 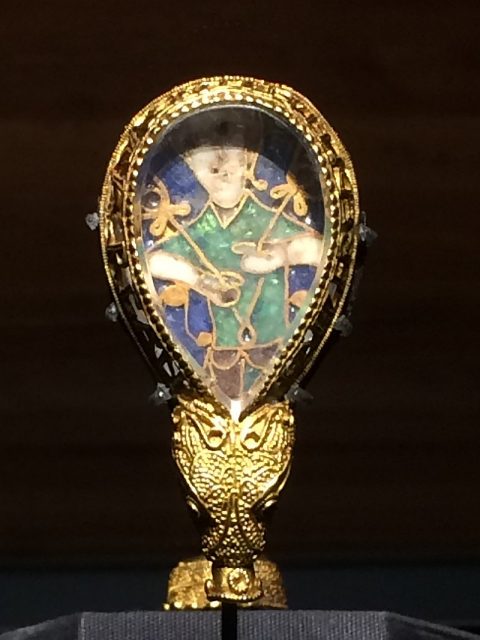 Presumably, the pointer was fixed into the socket and held in place with a rivet. The pointer’s body depicts a figure in a seated position laid under a polished quartz crystal in the shape of a teardrop, framed in gold. 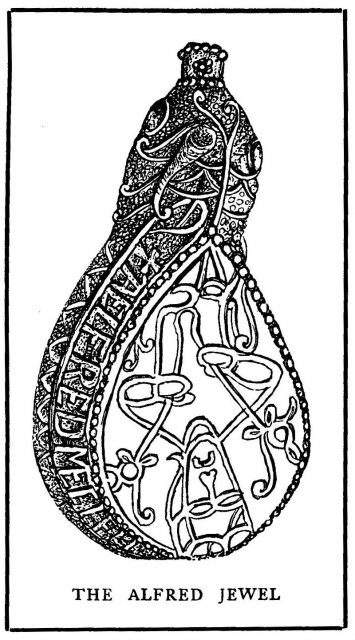 The teardrop-shaped Alfred Jewel is made of enamel overlaid with polished quartz, encased in gold.

Initially, the figure was interpreted be that of St. Cuthbert, who was possibly the most important saint of Anglo-Saxon England. However, today the figure is widely thought to depict Christ in Majesty. Other historians suggest the image is a representation of Sight because of its similarity to the 9th century silver Fuller Brooch. 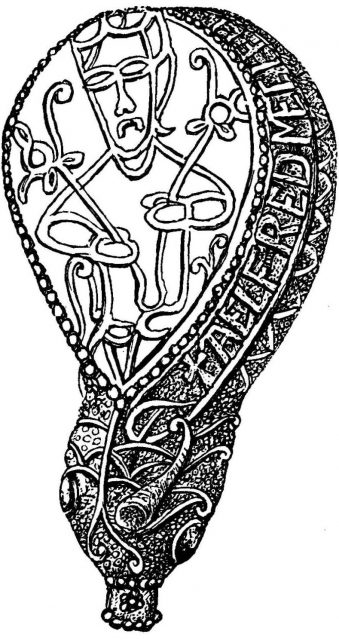 Drawing of the Alfred Jewel

The frame of the Alfred Jewel is carved the Old English letters AELFRED MEC HEHT GEWYRCAN, meaning “Alfred ordered me to be made.”

The inscription on the Alfred Jewel flattened.

King Alfred commenced his rule in 871 as the King of Wessex after the succession of his brother King Æthelred. Wessex was often attacked by the Vikings which challenged Alfred, who soon proved to be a powerful leader. By 886 he unified the territories of southern England and formalized its boundaries. 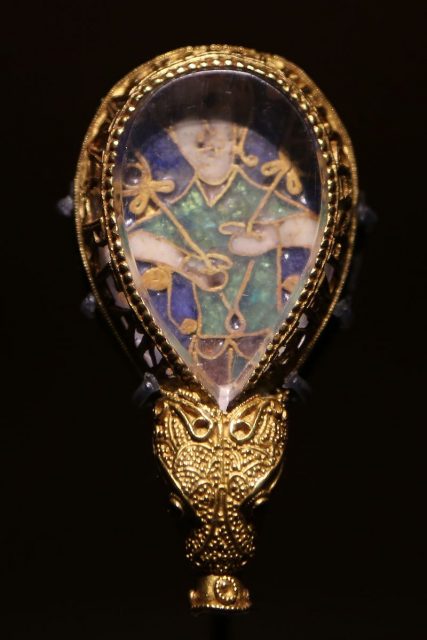 Photo of the Alfred Jewel taken from the front. Photo by Geni CC BY-SA 4.0

As a ruler, Alfred was a great diplomat, whose strategic approach provided him with a strong alliance with the neighboring kingdom of Mercia after he gave the hand of his daughter Æthelflaed to the Mercian leader. Alfred was a unique leader of his time who recognized the power and significance of education. 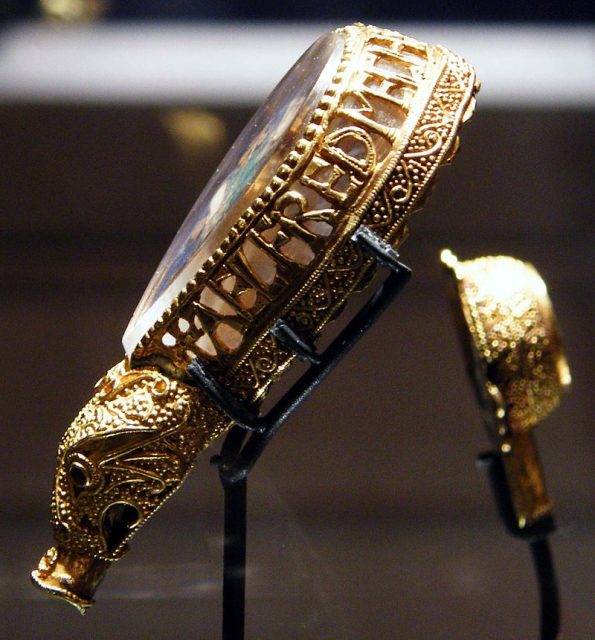 The Alfred Jewel, a piece of 9th century Anglo-Saxon jewelry in the Ashmolean Museum, Oxford. Photo by RIchard M Buck CC BY SA 3.0

Combining wisdom and literacy he strove towards an enlightened leadership and well-educated court who would improve the power of his kingdom. King Alfred died in 899 after a bloody battle against invading Scandinavian warriors.

The Alfred Jewel, seen in profile.

King Alfred began his education as a young man. At first, he learned to read Old English but then advanced in Latin when he was older. His engagement in educational work led him to arrange and actively participate in the translation of Latin religious texts to Old English, aiming to spread wisdom further.

Reportedly, every Episcopal See in Alfred’s kingdom received a copy of Pastoral Care which was written by Pope Gregory the Great. Along with the copy came an aestel. The aestel was a valuable object kept near books and used as a pointer for reading.

The Alfred Jewel is described as “a matchless piece of goldsmith’s work” by the British Archaeology Collection at the Ashmolean Museum.

The Alfred Jewel was one of those aestels, discovered in a field in the late 17th century in North Petherton, a small rural town in the county of Somerset. The place of its discovery reveals an intriguing background story referring to King Alfred. North Petherton is near Athelney Abbey — the refuge from where Alfred launched his counter-attack on the Great Army of the Danes. In 1718, the jewel was presented to the Ashmolean Museum in Oxford where it is still displayed today. 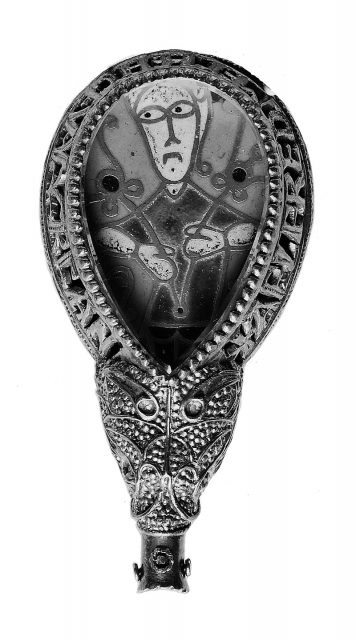 A copy of the Alfred Jewel. Photo by Wellcome Images CC By 4.0

According to some theories regarding the use the Alfred Jewel, this golden marvel was at mounted the center of a royal crown or pendant. However, these theories were quickly debunked and replaced by the claim that the object was actually used as an aestel.

The millennium remembrance of King’s Alfred death in 1901 prompted the creation of Alfred Jewel replicas, made by traditional jewelers Elliot Stocks of London and Payne’s of Oxford. The Ashmolean department of conservation also created several replicas.

The cryptic treasure of the Alfred Jewel bears witness to the cultural awareness and achievements of King Alfred as well as the spread of learning through the use of Anglo-Saxon vernacular.

« Only the Strong Survive: Did Vikings Abandon their Sick Children?
Long disputed radio broadcasts from Amelia Earhart may have been genuine, research group says »