When all the dead rise again, then shall I pass into the void. You stars above, cease your course! Eternal extinction fall on me!

Richard Wagner’s piece tells the myth of the Flying Dutchman, a 17th century trading ship eternally damned for her captain’s reckless decision to press on into dangerous, stormy seas. The ghostly ship sails above and under the water, willing to return home but doomed never to reach a shore.

The legend began in 1641 when Captain Hedrick van der Decken was returning home to Amsterdam after a trip to the East Indies. He was sent by the Dutch East India Company to bring silks, dyes, and spices back to the Netherlands. Like so many other trade ships, this one was faced with the danger of sailing around the Cape of Good Hope. 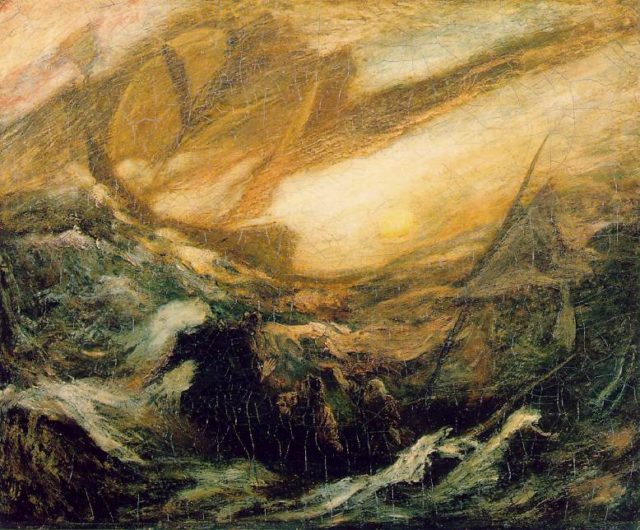 View of Table Bay (overlooked by Kaapstad, Dutch Cape Colony) with ships of the Dutch East India Company, c. 1683. In the 1600s the size of the Dutch merchant fleet probably exceeded the combined fleets of England, France, Spain, Portugal, and Germany.

Before the optimistic name “Good Hope,” the rocky peninsula was named “Cape of Storms” because of its treacherous outcrops of rock, turbulent currents, and bad weather. The name was given by Portuguese explorer Bartolomeu Dias who was the first European to reach the cape, in 1488. The Cape of Good Hope is the final resting place for countless ships.

According to the legend, a storm began when van der Decken and his crew attempted to round the cape. The crew desperately begged their captain not to sail into the chaotic waters, but he refused. He was determined to face the storm.

As the huge waves crashed against the ship, van der Decken lit his pipe and smoked it. Some say he had gone mad, others that he was drunk. Whatever caused the captain to sail into certain death is unknown, but he remained stubborn even when his crew, pushed to their limits, mutinied. 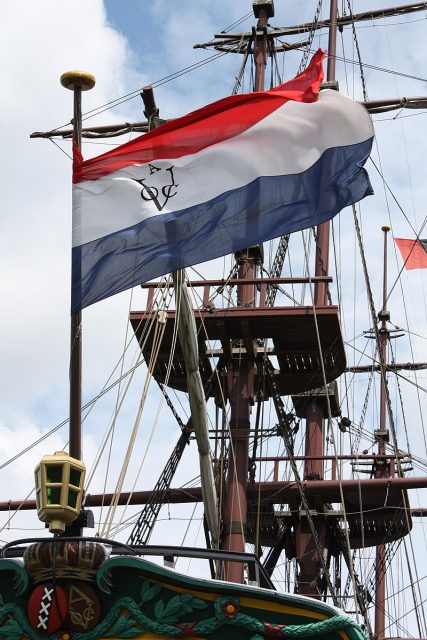 Flag of the VOC (Dutch East India Company) on the replica of the trading ship East Indiaman Amsterdam in Amsterdam. Photo by McKarri CC BY-SA 3.0

The captain killed the leader of the rebels and threw him in the sea, and he vowed that he would sail around the Cape even if it took him “until Doomsday” to do so. The legend further says that an angel appeared to van der Decken at one point and that the captain screamed to the otherworldly visitor, swearing that he would remain there until judgment day, sealing his ship’s fate.

The ship and its crew were condemned to sail until doomsday indeed, never being able to return home or to reach a shore. The tale of the Flying Dutchman has inspired spooky superstitious beliefs among sailors ever since. 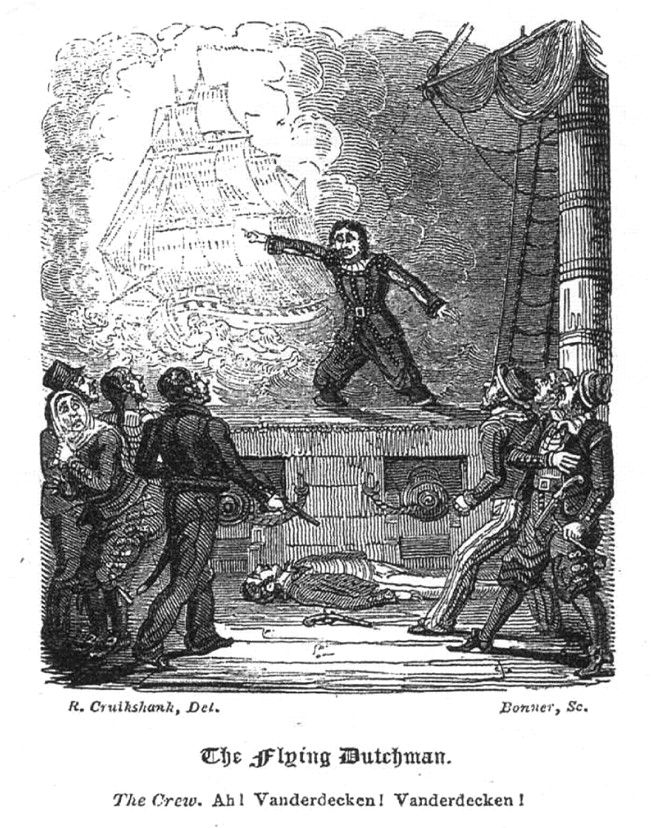 It is said that the Flying Dutchman sails all over the world, leading other ships astray, causing them to crash on hidden rocks or reefs. The legend also says that if you look into a fierce storm off the Cape, you might see the ghost ship. But the sight of it is an omen of doom. 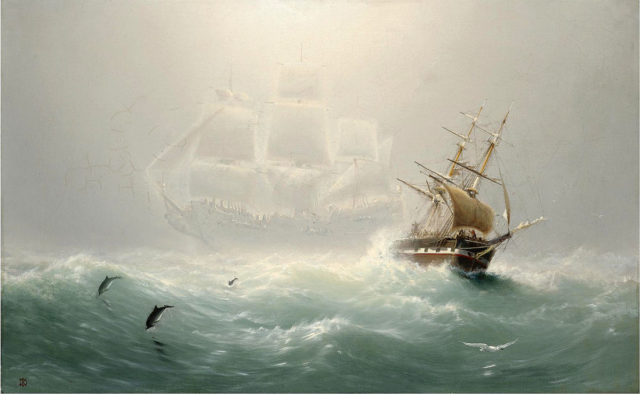 The Flying Dutchman, by Charles Temple.

There are a lot of written references to the phantom ship. The first one is attributed to John MacDonald in his Travels in Various Parts of Europe, Asia and Africa During a Series of Thirty Years and Upward, published in 1790. A passage in the book reads: “The weather was so stormy that the sailors said they saw the Flying Dutchman. The common story is that this Dutchman came to the Cape in distress of weather and wanted to get into harbor but could not get a pilot to conduct her and was lost and that ever since in very bad weather her vision appears.”

A similar story can be checked in A Voyage to Botany Bay from 1795, written by a notable London socialite of the 18th century, George Barrington. As the writer retells the story of a lost Dutch frigate off the Cape of Good Hope, he concludes that the narrative was well known among mariners. 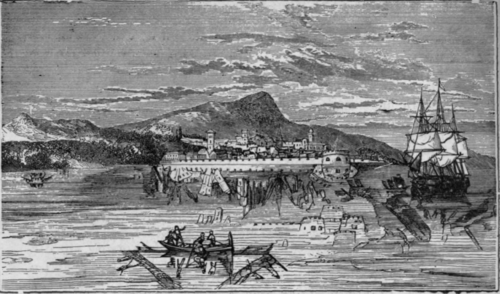 Perhaps one of the most prominent reports of all about the ship was made by Prince George, the future King George V of England. In his youth the prince spent three years traveling, along with his elder brother, Prince Albert Victor, the future King Edward VIII.

The log of the royal ship reports a sighting of the Flying Dutchman on July 11, 1881. The occurrence happened in the  Bass Strait, off the Australian coast between Melbourne and Tasmania. The log describes a phantom ship that appeared in an unusual glowing red light. As the royal ship approached the phantom, there was no trace of it in any direction even though it was a clear night and peaceful sea. 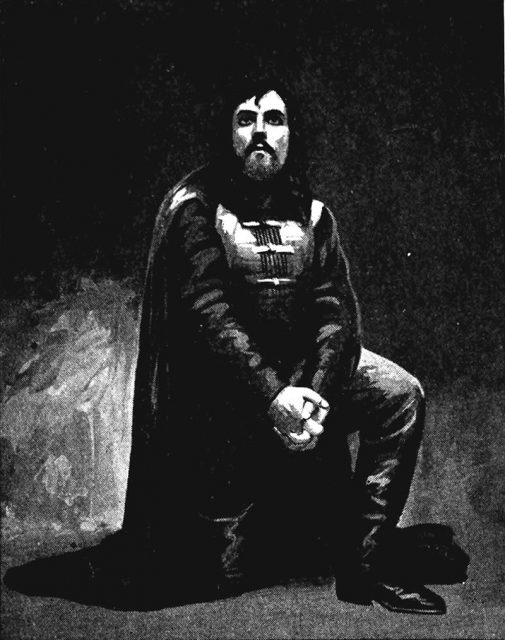 But that doesn’t enhance the mystery, it rather provides an explanation for it. Such a peaceful sea and clear night might cause a Fata Morgana — an optical illusion that is generated under certain atmospheric conditions that projects a distorted image of a real object. For sailors in the open sea, that image would probably be a ship.

Read another story from us: Anne Bonny was a violent & ferocious warrior & one of the few female pirates to sail the high seas

The story has been inspirational for many artists, designers, writers, and designers while the most popular modern reference to the Flying Dutchman is probably in Pirates of the Caribbean, where the ship spreads terror across the seas. Under the command of Captain Davy Jones, the Flying Dutchman was tasked by the sea goddess Calypso with taking the lost souls of sailors safely to the underworld.

« WWII-Era Bills Worth around $2 Million discovered under Churchill’s favorite tailors
Woman who uncovered racism as reason for Japanese internment in U.S. dies »