Archaeologists have found a treasure trove of 3,000 gold and precious items in Kazakhstan in a burial mound in the remote Tarbagatai mountains. It’s believed the “priceless” stash that belonged to the Saka people and could date to eight centuries before the birth of Christ.

This treasure may yield important insights into the Saka. They were nomadic people who spoke an Iranian language and were a sub-group of the Scythians, who dominated the Eurasian Steep for centuries. The Saka focus was in Central Asia, and expanded from there into Iran, India, and Central Asia.

The burial mound is believed to have belonged to a prestigious couple. Professor Zainolla Samashev, in charge of the excavations, said in an interview: “A large number of valuable finds in this burial mound let us believe a man and a woman are buried here–the reigning persons or people who belonged to the elite of Saka society.” 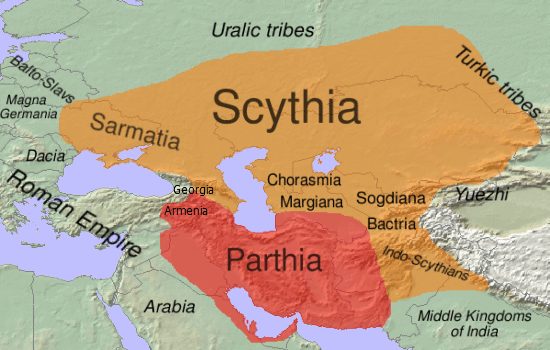 Scythia and Parthia in about 170 BC (before the Yuezhi invaded Bactria). Photo by Dbachmann CC BY-SA 3.0

Head of the East-Kazakhstan region Danial Akhmetov said to the Daily Mail: “This find gives us a completely different view of the history of our people.” It is now evident that these people were exceptionally skilled in mining, or extraction, selling and jewelry making,” he said.

“We are the heirs of the great people and great technologies,” Akhmetov said.

The Saka were renowned for their horsemanship. First recorded in the 9th century B.C., they were a major military power. Archaeologists rediscovered their culture and history in the twentieth century.

A cataphract-style parade armour of a Saka royal, also known as “The Golden Warrior,” from the Issyk kurgan, a historical burial site near ex-capital city of Almaty, Kazakhstan.

Among the finds are earrings in the shape of bells, gold plates with rivets, plaques, chains, and a necklace with precious stones.

Gold beads decorating clothes were made with the use of sophisticated micro-soldering techniques, supporting a high level of development in jewelry-making skills.

Archeologists do expect to find the remains of the prestigious couple, the owners of the treasures, but they have not yet dug open their graves.

This discovery turns some assumptions on their head. Primarily, how could a nomadic people produce this type of finely detailed jewelry that required metalwork and mining?

“This suggests that our ancestors possessed the technology and also had vast knowledge in the field of metallurgy,” said the archaeologists in a statement.

Other excavations in Central Kazakhstan have found stone dwellings that were apparently made more than 2,500 years ago. One anthropologist wrote that the economy of the region was built on cattle breeding, and findings of stone hoes and grain growers indicate some agricultural advances. 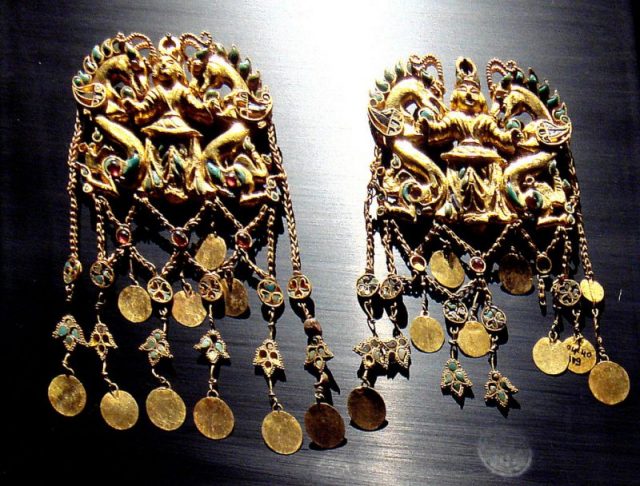 Gold artifacts of the Saka in Bactria. Photo by World Imaging CC BY-SA 3.0

In the centuries before the birth of Christ, nomadic tribes dominated Eurasia, from what is today western China all the way to the Danube. However, despite their nomadic nature, the elites did have monumental burial structures and grave goods. Some of the graves have been plundered over the centuries, spoiling archaeological research.

In 1936 the country was made the Kazakh Soviet Socialist Republic. Kazakhstan was the last of republics to declare independence from the Soviet Union in 1991. 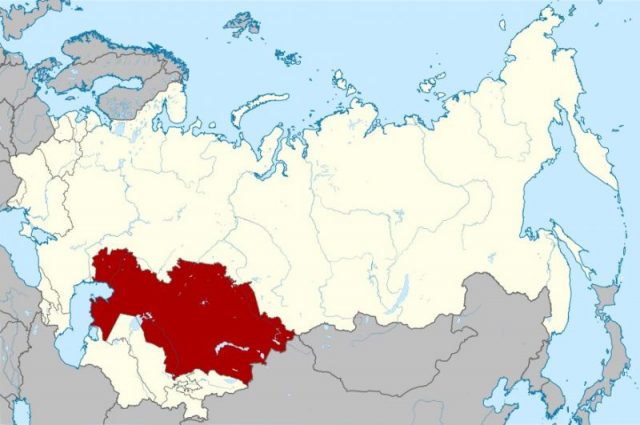 Location of Kazakhstan (red) within the Soviet Union. Photo by Shadowxfox CC BY-SA 3.0

“Since Kazakshtan’s independence, archaeologists have been grappling with the task of studying an ancient history,” according to an article in the Astana Times. This site was reportedly excavated two years ago, but there was also some digging in the area in the 18th century during the reign of Peter the Great.

Read another story from us: Ancient Romans Used the Word “Abracadabra” to Cure Malaria

It is believed that there are up to 200 burial mounds in the area. This was a “plateau with rich pastures seen as paradise by the Saka kings,” according to the Daily Mail.

Nearby, the team has “also discovered seven more recent Islamic graves that date to the 15th and 16th centuries,” according to Archaeology. “The graves were oriented toward Mecca, and some of them contained jewelry, including a copper ring, a bronze earring, and a silver buckle.”