The power of images and propaganda is real. They have the strength to shape the views of entire civilizations and the influence to become embedded in the national psyche for centuries. For instance when the average person thinks of Napoleon Bonaparte, most likely a few key images come to mind. The oddly iconic hat, a hidden hand tucked into his military uniform, and the fact that he was short.

A short Napoleon has become such an ingrained part of Western history and culture that even a complete psychological profile was named for it. If someone has a “Napoleon complex” it means trying to overcompensate for their short stature by exaggerated assertiveness and embellished bellicosity. The idea has come down to us that Napoleon tried to conquer Europe in order to make up for his lack of height. 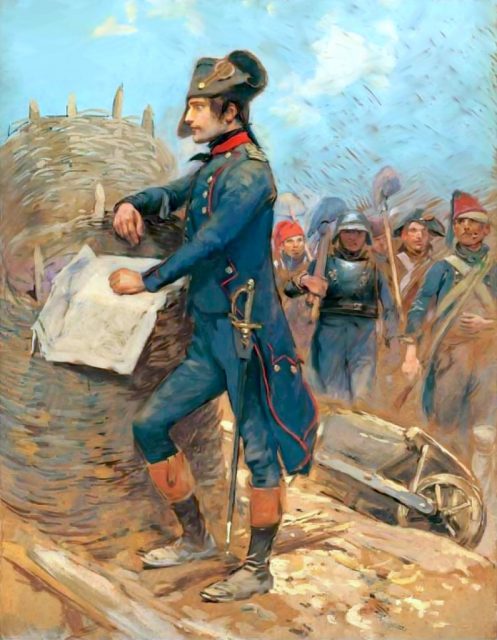 However, the fact is that Napoleon was of average (possibly even slightly above average) height for his day. The image of the short emperor is the combined result of a confusion in differing measurement standards, confused contemporary perceptions, and a single cartoon used to portray Napoleon in a foolish, negative light. 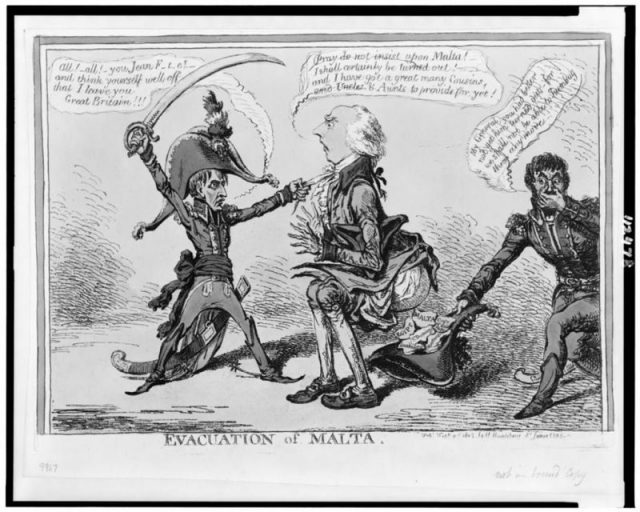 British propaganda of the time promoted the idea that Napoleon was short.

In the early 19th century the French and British used different scales of measurement. The French inch and foot was substantially larger than the British equivalent. In 1802, French doctor Jean-Nicolas Corvisart stated Napoleon’s height to be 5’2” (5 feet 2 inches).

The British press took note of this and later used it in their war of words with the French. However, taking into account the differences in measurement standards, 5’2” in France equated to 5’7” (roughly 170 cm) in the British imperial system, the system still used in America today. 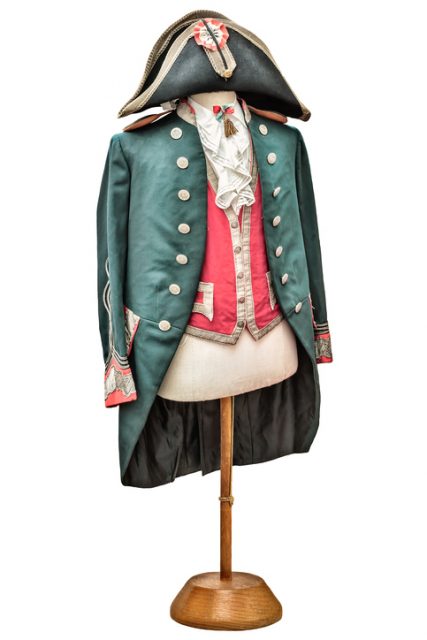 Retro styled image of a vintage Napoleon costume with hat.

Matters were further confused during his autopsy. Napoleon died in exile on the tiny isolated island of St. Helena deep in the south Atlantic. His French doctor, Francesco Antommarchi, carried out the autopsy and stated his height at death was 5’2”.

This figure was signed off by the other British doctors on this British-controlled territory. Again though, we have the discrepancy in measurement scales. This figure of 5’2” only applied to the French system. His real height was 5’7” in the British system. 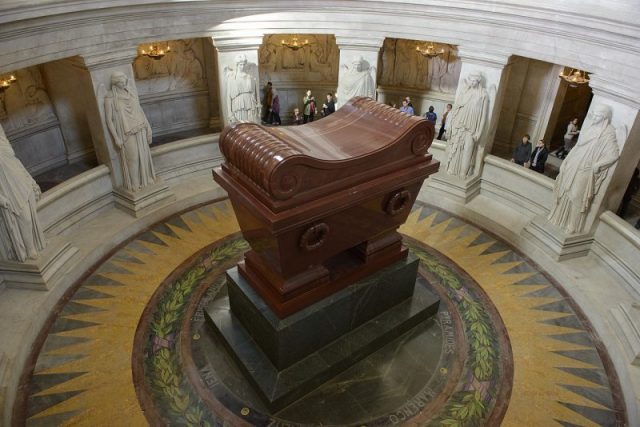 According to the BBC, the average height of British males at the time of Napoleon was around 165 cm or 5’5”. This means that Napoleon, at 170 cm (5’7”) was actually a bit taller than normal for his era.

Another confusing matter had to do with the perceptions of the day. Firstly, Napoleon was often referred to by his troops as “Le Petit Corporal,” the Little Corporal. In the French language though this moniker “Petit” more often than not doesn’t refer to actual size but is rather used as a term of endearment. Napoleonic soldiers weren’t making fun of their emperor’s height, they were giving him a popular and endearing nickname.

Also, Napoleon liked to surround himself with members of his Imperial Guard. There were strict height requirements to be selected into the Guard which meant Napoleon was usually seen among significantly taller men. A fact which also could have led to the perception that he was short. 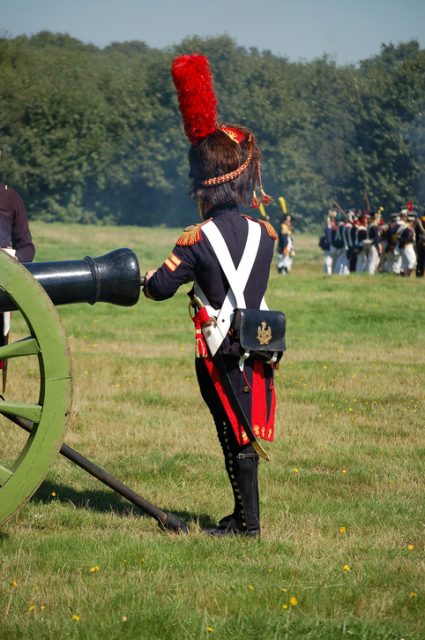 Lastly, we have the case of the all-powerful image in creating widely-held beliefs. The year 1803, directly after the peace treaty between the French and British had been called off, is when this notion of Napoleon’s shortness really took hold.

Tristin Hopper of the National Post has commented that Napoleon was considered “of normal stature” until 1803. So what happened in 1803 to change the course of Napoleonic lore in the popular imagination? A caricature cartoon was published in Britain titled “Maniac Ravings or Little Boney in a Strong Fit.” 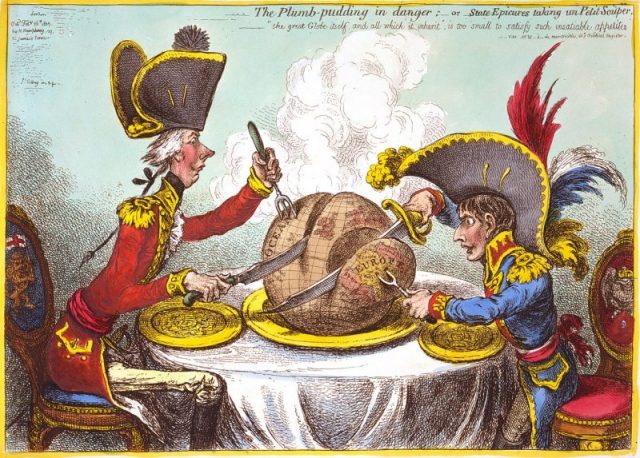 ” The Plumb-pudding in danger ” – Caricature by James Gillray

James Gillray was the author of this cartoon which portrays a diminutive Napoleon flipping over furniture in a childish temper tantrum and screaming about the British parliament and press. His oversized hat and furniture make Bonaparte to appear almost dwarf-like.

The cartoon was spread far and wide and became enormously popular, inspiring many others to also depict Napoleon as a tiny runt. In this way, a bad-tempered, child-sized Napoleon became the accepted and henceforth authoritative standard for images and depictions of Bonaparte. 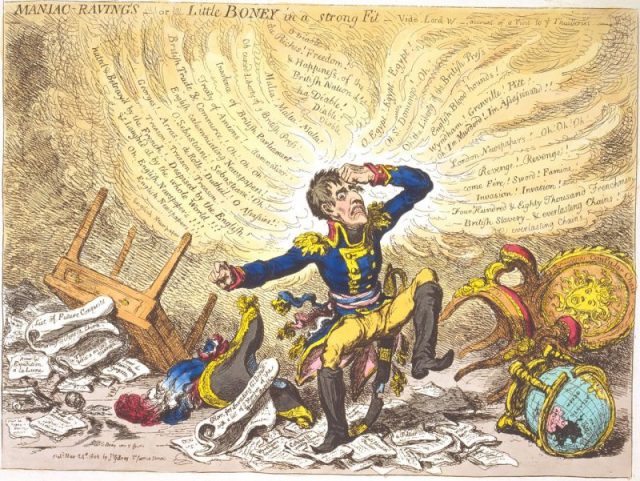 “Maniac raving’s or Little Boney in a strong fit.” Gillray’s caricatures ridiculing Napoleon greatly annoyed the Frenchman, who wanted them suppressed by the British government.

Napoleon at the time was aware of the image and not happy about it. Despite many attempts, he was unsuccessful in getting the British media to discontinue the unflattering cartoon. In fact, the National Post states that just before he died, Napoleon reportedly said that James Gillray and his cartoon “did more than all the armies of Europe to bring me down.”

Read another story from us: Napoleon’s hat from the worst day of his life was auctioned and fetched a hefty sum

So there we have it. The origin of one of the most enduring myths and misunderstandings of history. One that is still generally accepted as fact today. But as Napoleon himself said: what is history but lies that have been agreed upon.

« 36,000-year-old Meat of a Mummified Bison was used for a Stew
3.95-Billion-year-old Rocks Show Oldest Evidence of Life on Earth »