King Kong was Inspired by the Quest for Komodo Dragons

King Kong is one of Hollywood’s defining monster movies, and the most high profile ape on celluloid. The story of humanity’s attempt to wield the power of nature, and the unlikely yet touching relationship between Ann Darrow (Fay Wray) and the mighty Kong, exerts a hold that continues to fascinate filmmakers.

As recently as last year, the magnificent monkey was thrilling cinema audiences, with the release of Kong: Skull Island. And the moment seemed appropriate to tell another tale, this time of the real life inspiration behind the fantasy adventure. 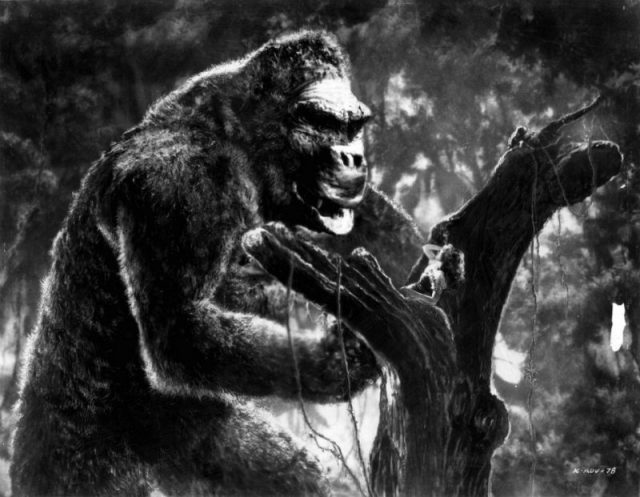 The eye-popping exploits of fictional director Carl Denham (Robert Armstrong) and his fateful trip to the island of Kong’s birth were the result of actual expeditions. In fact, if producers had had their way, the movie would have been a documentary. Or at least a documentary by their standards. Merian C. Cooper was the co-director and mastermind behind the picture, and someone who wouldn’t look out of place in a movie himself. 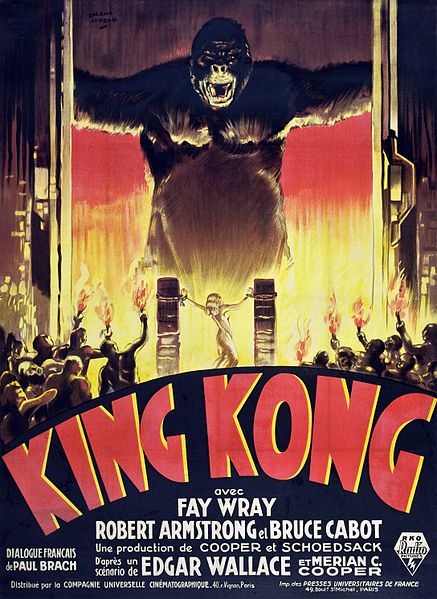 When The Hollywood Reporter consulted author Ray Morton for a description of the great man, they were told he was a “globetrotting adventurer, a really colorful guy. He was a war hero. He had been shot down a couple of times in both World War I and in the Polish-Russo War. He escaped from a prisoner-of-war camp. He had an amazing history.” 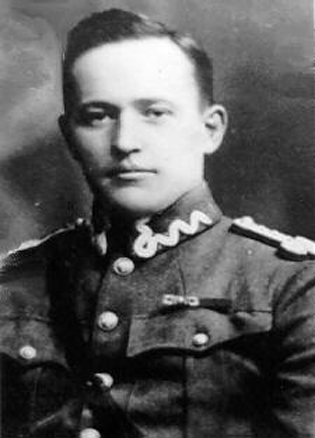 Cooper’s love affair with the movie camera started when he began documenting his travels with partner and fellow Kong director Ernest Schoedsack. Displaying a flair for show business, the pair took their footage and constructed a plot around it in what were called “natural dramas.”

There was a documentary element. Indeed nature shows are criticized for fictionalizing events, even today. But Cooper was an entertainer and a man of the times. Morton comments that “Cooper was very much a 19th century man’s idea of a conservationist. Which is, you go out and shoot animals and have them stuffed and put them into a museum because you’re concerned about animals. That was kind of his thing.” 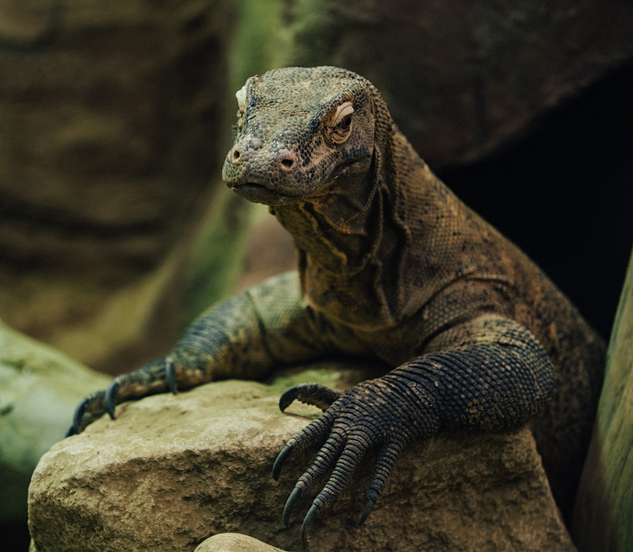 William D. Burden wanted to be the first non-native to see – and catch – a Komodo dragon.

These natural dramas led to him seeking bigger and better things to put up onscreen. He had an established interest in humanity’s hairy ancestors, and wanted to craft an installment around one. Yet the origins of the King Kong script lay in a quest for dragons. Komodo Dragons to be precise.

His friend William Douglas Burden had visited the island of Komodo in Indonesia (back then in 1926 it was known as the Dutch East Indies), looking to become the first non-native to see and, hopefully, catch one. Burden was certainly competition for Cooper. The latter was a character straight out of a movie. Burden himself could have been a star. 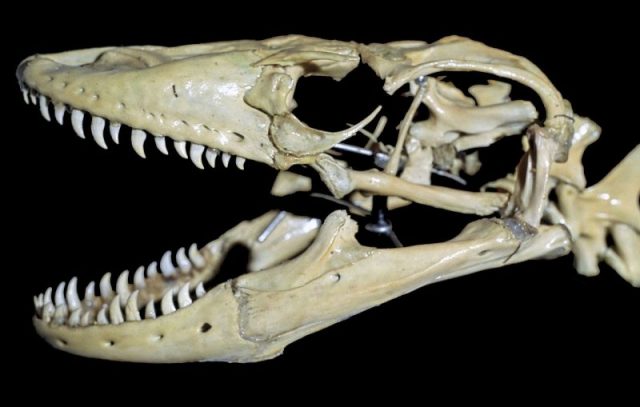 Skull of a Komodo with serrated tooth. Photo by Danadi Sutijanto CC By SA 4.0

An article for Inverse paints a pretty picture, saying “He was classically handsome — broad forehead, intense gaze, chiseled jawline, immaculate curls — and a sucker for a good adventure, just like Cooper. He preferred wild backwaters and thorny jungles to the comfortable plush lifestyle he’d grown up with as a descendant of the Vanderbilt family fortune.”

That was the hunter. As for his prey, they were referred to in Burden’s obituary from 1978. Inverse quotes it in vivid terms: “The Komodo dragons were perhaps more vicious than the stories told about them, thrashing at vegetation with ease, eerily dinosaur-like in structure, ‘effortlessly devouring a whole buffalo at one sitting.’” The article estimates their size and weight at “about 10 feet long and 350 hefty pounds.” 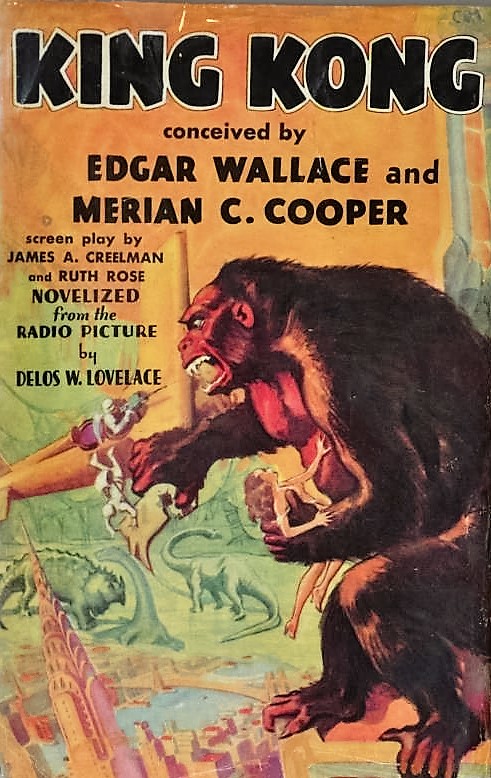 Cover of the 1932 novelization of King Kong written by Delos W. Lovelace. This novelization was released just over two months before the film premiered in New York City on March 7, 1933.

It’s here that the seeds of Kong were planted. The monsters were there, waiting to be captured. The human element was in place. Cooper could be seen as Carl Denham, Burden was perhaps a model for hero Jack Driscoll (Bruce Cabot). But what about Ann Darrow, the aspiring actress who, unbeknownst to her, was going to be dangerously wooed by a giant gorilla…?

The role has its origins in Catherine White Burden, who traveled to Komodo with her husband and got unexpectedly close to the action. She was no original scream queen like Fay Wray, but this socialite wasn’t exactly rough and ready either. 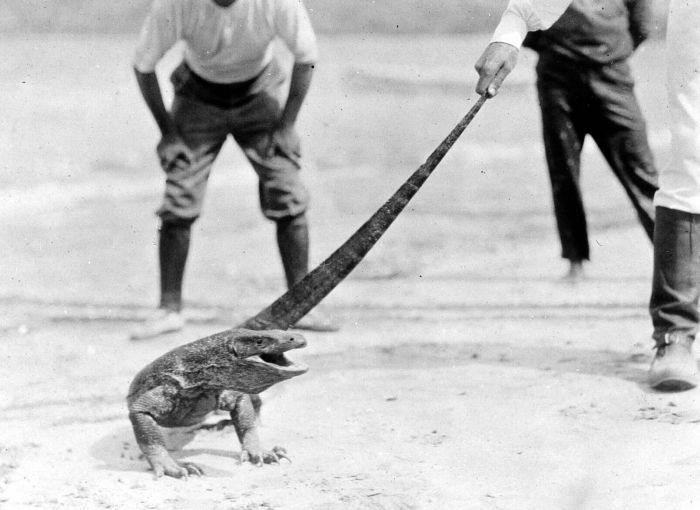 The Komodo dragons were a force to be reckoned with and the couple had watched them chew and claw their way through the mesh-heavy crates they’d tried to put them in. At one point Catherine went toe to nose with a dragon and if someone hadn’t arrived to blast the creature, Mr. Burden could have been flying home with a coffin instead of a spouse.

Cooper lapped up this saga of wildlife with the emphasis on “wild.” In addition to grabbing three Komodos, Burden’s team had amassed thousands of samples, plucked from the island’s ecosystem, which included beasts, birds and bugs. Two of the dragons were a star attraction at the Bronx Zoo, just as Kong had been chained and presented to the world’s media.

Whereas the “Eighth Wonder of the World” had an epic death being shot to the ground from the top of the Empire State, the dragons passed away as exhibits. They went to the taxidermist so they could live on as visitor attractions. 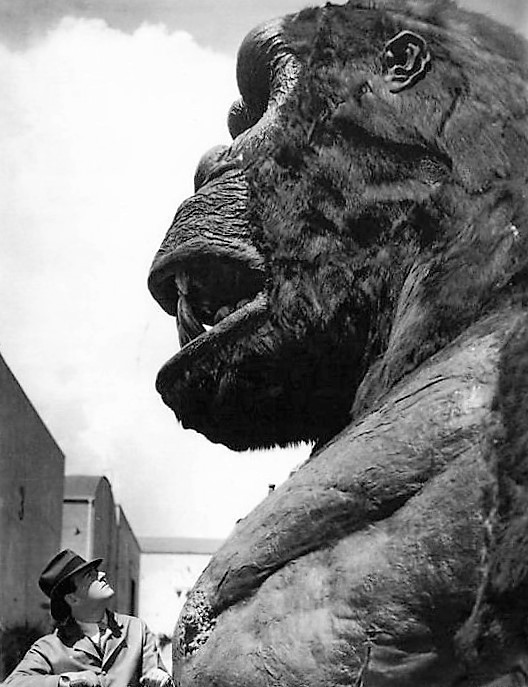 Merian C. Cooper glances up at his creation.

Joining them as part of the display was a stuffed gorilla. In itself this was a sight as exotic as a Komodo. As Ray Morton puts it in The Hollywood Reporter, “Gorillas at that time were… almost still a little bit like mythical creatures.” 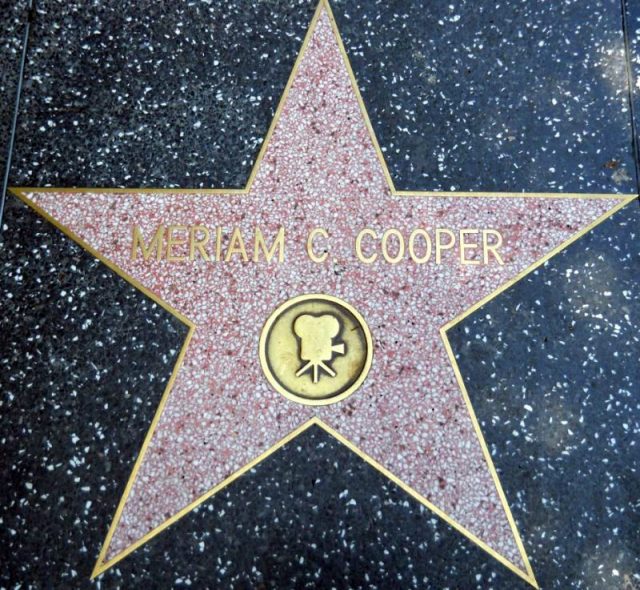 Star on Hollywood Walk of Fame, at 6525 Hollywood Blvd., with first name misspelled.

“The first Western person saw a gorilla in the very early 20th century or perhaps late in the 19th century. So people just didn’t know that much about them. That’s important, because Cooper knew he could kind of make them into whatever he wanted.” 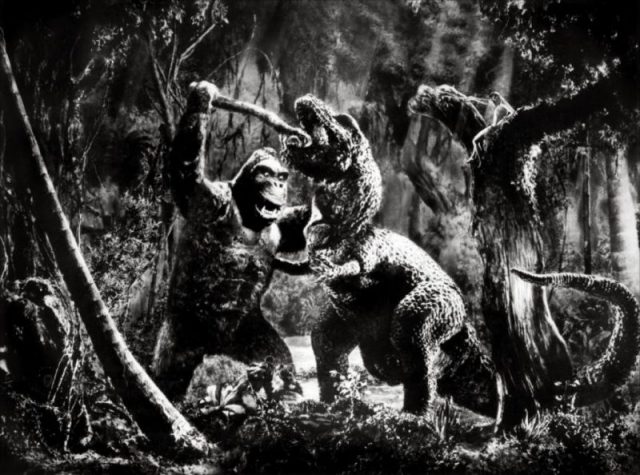 As far as Cooper was concerned, he had the ingredients for a barnstorming natural drama. It would be gorilla vs dragon, though there was a fly in the ointment that made that plan go extinct… the Great Depression of the late 1920s – late 1930s. 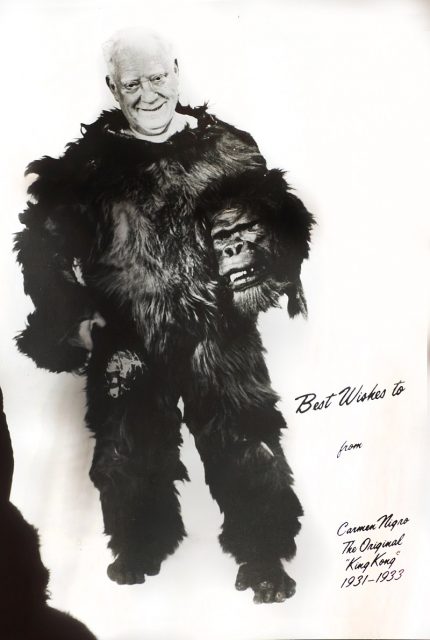 Investors were unwilling to sink funds into a jungle jaunt, so Cooper went to do other things. This picture maker ended up at RKO, where one of the projects brought to his attention was a dinosaur movie called Creation. 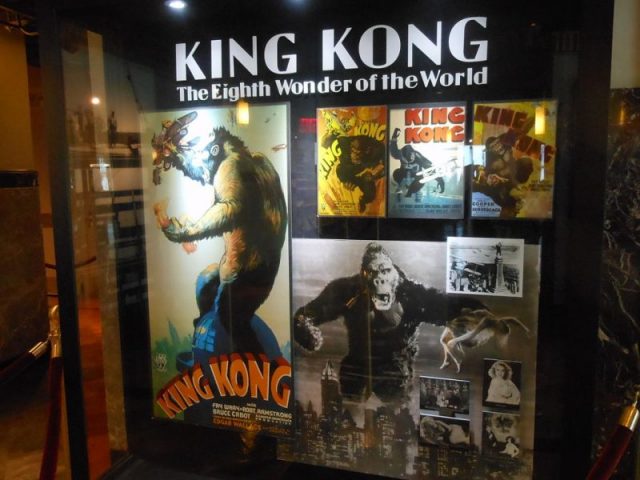 The intention was to make an adventure story where people of today met prehistoric threats on an island. Not a million miles away from Cooper’s concept. Only animator Willis O’ Brien was going to bring nature to life using stop motion. This is a technique where models are posed incrementally and shot one frame at a time. When run together, the shots give the illusion of movement.

Creation never hatched, but King Kong went on to conquer the world. It became notable not only for its striking subject matter but also as a benchmark for stop motion. 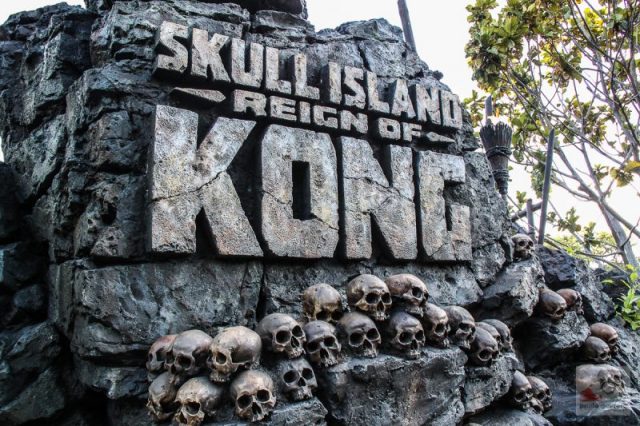 Skull Island: Reign of Kong at Universal’s Islands of Adventure. Photo by Paulo Guereta CC BY 2.0

Lord Of The Rings director Peter Jackson paid his own mega-budget tribute to Kong in the form of a 2005 CGI fest which again pushed the envelope for movie special effects. The less said about 1976’s version, showcasing a man in a monkey suit, the better, though that effort has its admirers.

Read another story from us: Dian Fossey – The incredible story of the woman who inspired “Gorillas in the Mist”

Cooper never got to make the film the way he originally thought. Having said that, if he had then audiences would never have gotten to appreciate the spectacle of an enormous ape clambering through the Big Apple. To use the infamous closing line, it was beauty that killed the beast, and all the more memorable for it.