To the Moon! Jackie Gleason’s Space-Age Party Retreat – now up for Sale

Jackie Gleason may have been best known to American TV audiences as Ralph Kramden, a bus driver in Brooklyn living in a small apartment, on the 1950s hit series The Honeymooners, but on the weekends, the actor enjoyed his country retreat north of New York City that was the essence of 1950s swanky style — with a special twist.

Drawing on his fascination with UFOs, Gleason had the home and adjacent cottage constructed to be round inside and out — even the curved floorboards, windows, cabinets, bars, and furniture. He called the two buildings “The Spaceship” and “The Mothership.” 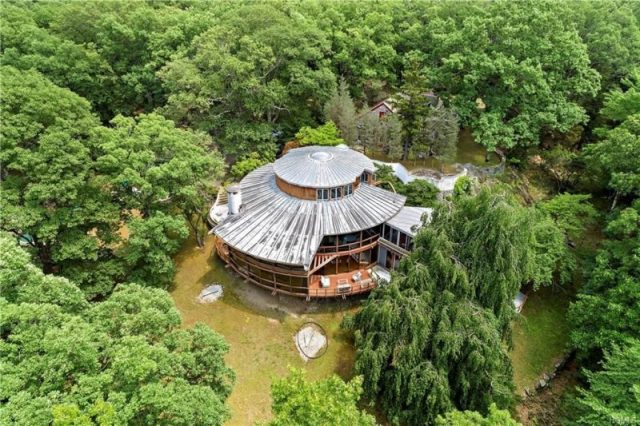 Aerial view of the round property. Photo by Zillow.

“The Mothership might not be a vessel for journeying to the stars, but stepping through its doors today is a trip back in time to an era when luminaries such as Frank Sinatra and Joe DiMaggio gathered with Gleason to sip cocktails around the 13-seat bar and to hear live music on a grand piano that’s the centerpiece of the first level,” reported Iohud.

The buildings are part of a Westchester County estate that went on the market this year for $12 million. 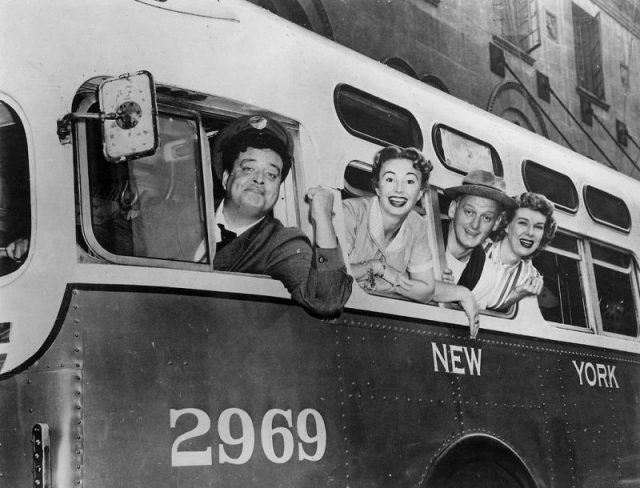 Photo of the complete cast of the television program The Honeymooners. This was the premiere of the show on CBS as it moved there from the DuMont network. From left: Jackie Gleason (Ralph Kramden), Audrey Meadows (Alice Kramden), Art Carney (Ed Norton), Joyce Randolph (Trixie Norton).

Gleason reportedly designed the two-bedroom, 3,950-square-foot home himself at the height of The Honeymooners’ popularity. It took five years and about $650,000 to build. The house was finished in 1959.

Memories of Gleason, who died in 1987 at age 71, are still strong in the region, where he lived from the middle 1950s until the early 1960s. It was during these years that he hosted the long running The Jackie Gleason Show too. Gleason’s restaurant in Peekskill is named in honor of the actor. 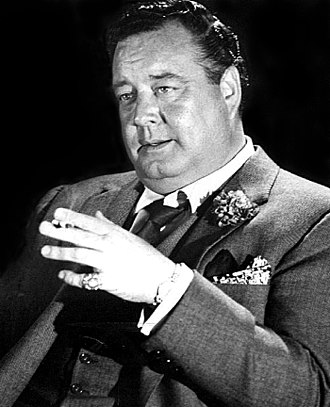 Gleason as Minnesota Fats in The Hustler (1961).

“He spent quite a bit of time up here,” said realtor Margaret Bailey in an interview. “He loved going to the bars in the area. All the people knew him. Jackie was a partier. He wanted an escape from New York City, and this was his nirvana.”

The current owner, a retired orthodontist, had bought the property in Cortlandt Manor in 1976 for just $150,000. 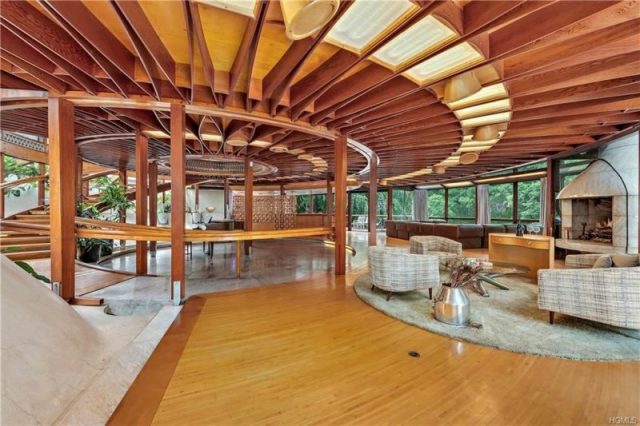 Interior of the house. Photo by Zillow

Designed by architect Robert Cika, the house was constructed by a Norwegian shipbuilder, who shipped the completed pieces to Cortlandt Manor for final assembly, Bailey explained to the press.

The Mothership was the main house. Designed to host parties, it has two bedrooms, two bathrooms, and two bars — the centerpiece was a 14-person, curving bar, which had a baby grand piano and a microphone that would rise from the marble floor. 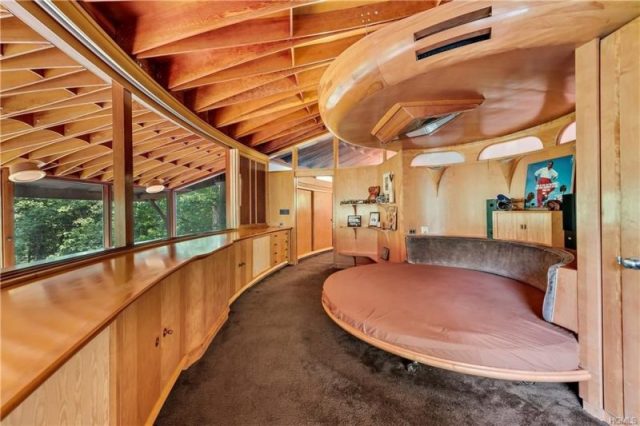 One of the five bedrooms. Photo by Zillow

According to realtor.com, “The house was certainly ahead of its time. It had central air conditioning and a built-in, surround-sound system. Each of the Mothership’s marble fireplaces was double-sided, save for the main fireplace, a three-sided, 40-foot-tall marble model that weighed 240 tons. Gleason reportedly commissioned Italian artists to fly to Cortlandt Manor to complete the stonework.” 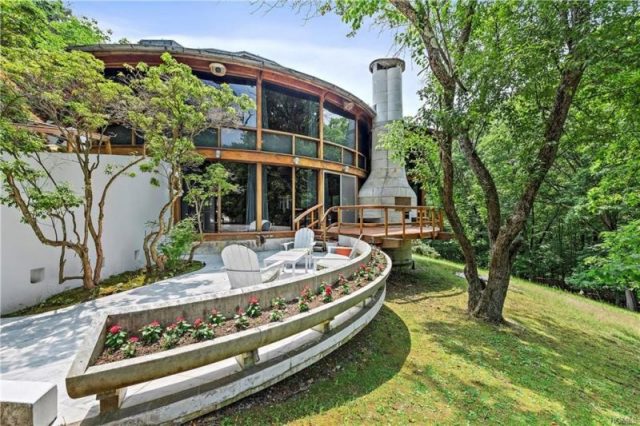 It took Gleason five years and $650,000 to build his unique home. Photo by Zillow

“The master bedroom features a uniquely rounded bed, and a TV mounted on the ceiling. There’s a fishbowl-like shower in the master bathroom, and a curved built-in desk in the office.”

In the sitcom, Ralph is famous for yelling to his wife “To the moon, Alice!” 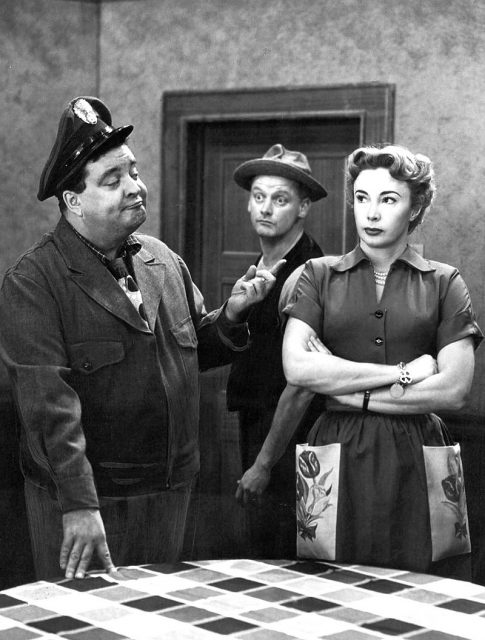 Jackie Gleason, Art Carney, and Audrey Meadows in The Honeymooners.

Honeymooners co-star Audrey Meadows, in her autobiography Love, Alice: My Life as a Honeymooner, “recalled being puzzled by a small, round hole in the marble floor near the piano until a fellow guest explained that Jackie could press a button for a microphone to rise from under the floor for a singer to perform using the state-of-the-art sound system,” reported the New York Post.

Read another story from us: Brady Bunch house is now for sale for $1.8 Million

Gleason may have been fascinated by UFOs but he was afraid to fly in an airplane after he was in a plane with an engine that died and had to make an emergency landing in Tulsa. Rather than get on another plane, Gleason borrowed money for a train ticket to New York. And after that, very few plane trips.

« The Strange History Behind Unlucky Number 13 and Friday the 13th
The Pope who Exhumed the Body of his Predecessor, Dressed it, and put it on Trial »