The U.S. Marine Corps Barracks in Washington, D.C. were established in 1801 and are the oldest post for the Marine Corps. The Barracks, which used to house 500 Marines, are now used as administrative offices and offices for the U.S. Marine Drum and Bugle Corp (“The Commandant’s Own”) and the U.S. Marine Band (“The President’s Own”).

Since 1806, the barracks have been the location of the Home of the Commandant of the Marines, and have housed all but the first two commandants, making them the oldest continuously occupied public building in Washington.

The barracks Marines are currently responsible for providing security for various state occasions in Washington, as well as at Camp David, and offers distance education and training for the USMC through the Marine Corps Institute. 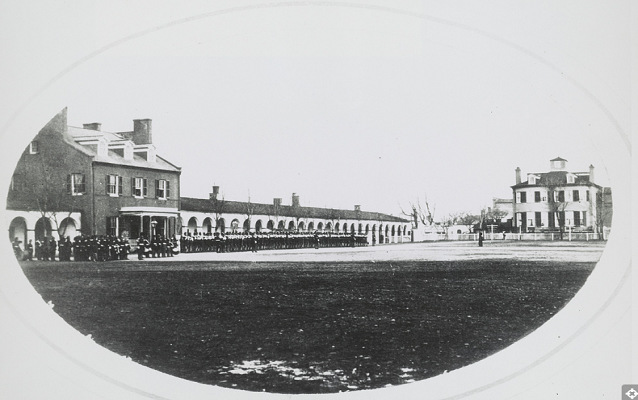 They also perform a variety of ceremonial functions in and around the nation’s capital, ranging from acting as funeral escorts for Marines and dignitaries, parades, and acting as a ceremonial honor guard.

The barracks are located at the corner of 8th and I streets. After doing careful exploration of the D.C. area, the location was chosen by then-President Thomas Jefferson and Lt. Col. William Ward Burrows by virtue of being both near the Washington Navy Yard and still remaining only a short march to the Capitol. 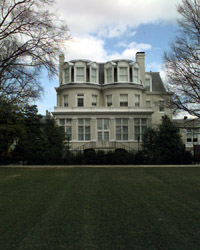 The Historic Home of the Commandants.

During the war of 1812, British forces, under Admiral George Cockburn and General Robert Ross, won a victory in Bladensburg, Maryland, and were able to march unopposed to Washington.

Most government officials of the time fled the city before the approaching army, including President Madison and his wife. When the British arrived, General Ross had dinner in the empty White House, while his troops set fire to much of the city before withdrawing the following day. 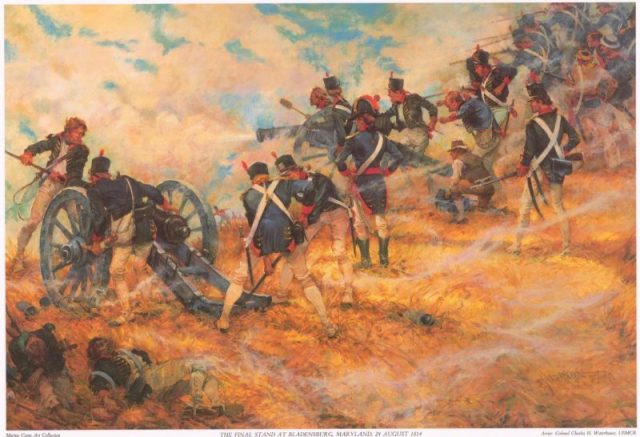 Colonel Charles Waterhouse’s depiction of U.S. Marines manning their guns at Bladensburg, Maryland in defense of Washington D.C. against the British on August 24, 1814.

When President Madison and the rest of the officials returned, the White House had been burned, along with many of the other official buildings of the government, but the Marine Barracks and House of the Commandants still stood unharmed.

There are a couple of theories regarding how the barracks escaped the destruction that swept so much of the city. One suggests that General Ross used the Commandant’s House as his headquarters while he occupied the city, and just neglected to put it to the torch when he was leaving. 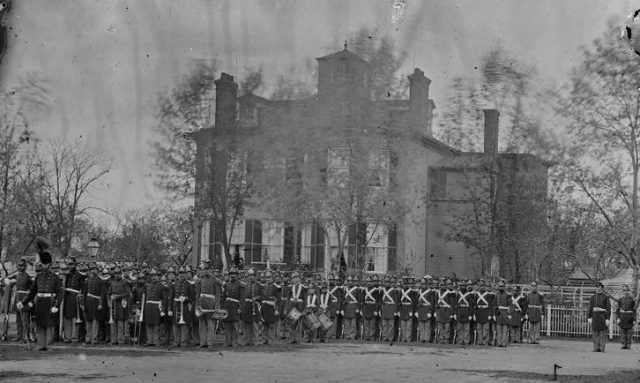 Marine battalion in front of Commandant’s House at the Marine Barracks in 1864.

The other, more widely held, theory is that the building was left untouched as a mark of respect for the bravery shown by the Marines at the battle of Bladensburg. The Marines had brought heavier field guns and artillery to support Commodore Barney’s troops, which likely would have been able to hold their ground had they not then been peppered with cannon fire.

The Home of the Commandants is of Federal-Georgian design, and was originally built as a two-story residence, with four rooms on each floor, and was about 25 feet by 32 feet in dimensions. 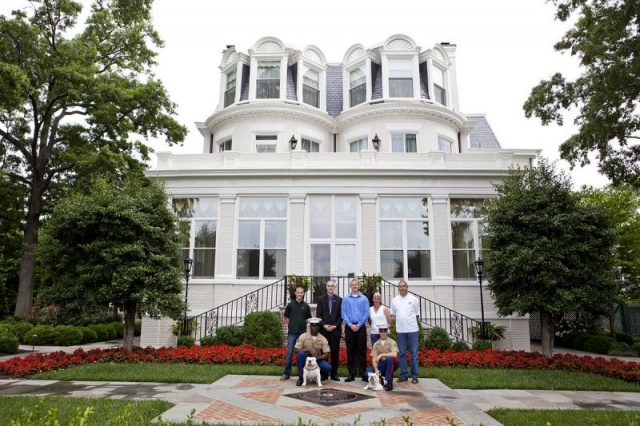 Home of the Commandants at Marine Barracks, Washington.

Over the years, starting in 1836, it has been expanded to about 30 rooms and over 15,000 square feet, and is surrounded by formal gardens. The Home’s décor is largely antiques, many of which were gifts by former occupants, and there are portraits of most of the commandants hanging throughout.

The house was entered in the National Register of Historic Places in 1972, and named a historical landmark in 1976. It was thoroughly renovated in the November of 2010 by a nonprofit organization dedicated to supporting and preserving the landmark, in order to repair basic structural issues that could compromise the building’s integrity.

That proved to be excellent timing as, just months after the renovations were completed, an earthquake occurred in Washington, which could have severely damaged the building prior to its restoration.

Truly, the U.S. Marine Corps Barracks and the Home of the Commandants have a long and rich history in their own right, as well as having their role in the history of America as a whole.