Bizarre Story: Woman who Convinced Doctors she had Given Birth to Rabbits

Mary Toft is a name to remember in the annals of bizarre birthing stories. There was a time, not too long ago, when pregnancy and birth were shrouded in secrecy and mystery, left in the hands of women unless a doctor was summoned to deal with a wealthy mother’s ill health.

For centuries, men were not even present when babies came, and not until the mid-20th century did it become commonplace to see them in delivery rooms.

If giving birth was once mysterious, the net result certainly wasn’t. Babies have been issuing forth since the dawn of man. And if secrecy gives rise to lies, there is no better example of that than the story of Mary Toft, of Surrey, England. 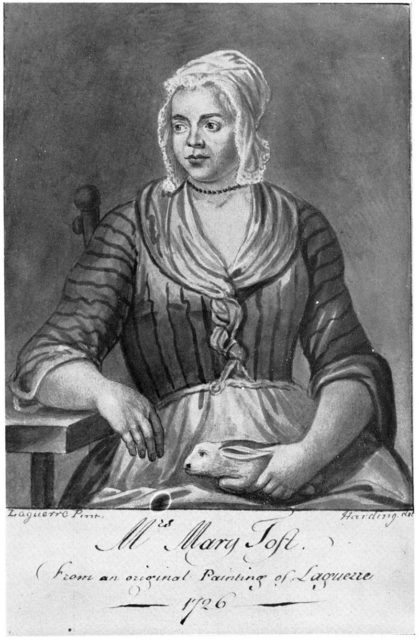 Mary Toft, in an engraving based on a painting by John Laguerre, 1726.

Her case, in 1726, was one for the storybooks, and even captured the imagination of royalty. Furthermore, she managed to dupe a number of medical professionals of the era into believing what now seems incredulous.

She convinced a lot of people, for a long time, that she had given birth to rabbits. And not just one, either. A dozen. 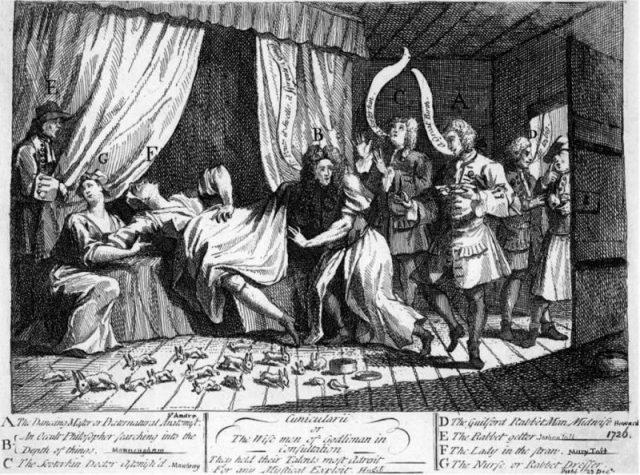 Mary had three children already when she realized she was pregnant again. Having neither the time nor the money to take a break from her work in farmers’ fields, Mary toiled away, but she constantly complained of pain in her stomach. Her concerns were dismissed by everyone, and Mary kept working until she simply could not stand. 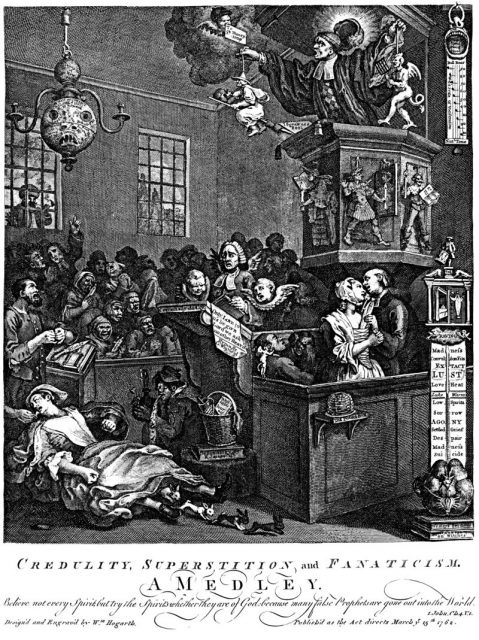 Ultimately she had a miscarriage, but it was so secret that many didn’t know what had happened. Consequently, when Mary showed them the “evidence” of her claim, various parts of unknown animals that did indeed turn out to be rabbit parts, she became something of a local legend.

Newspapers wrote about her, and finally, her case drew the attention of local doctor John Howard. She showed him, he believed her, and he started to consult with colleagues in London about the strange “birth.”

Because King George I became fascinated by the story, he sent one of his doctors, Nathaniel St. Andre, to consult with Howard. St. Andre, as unlikely as it seems, agreed with Howard, and not only that, said he saw the limbs of cats coming from Mary’s womb. He sent away the specimens for testing. (Of course, the animals were all dead.) 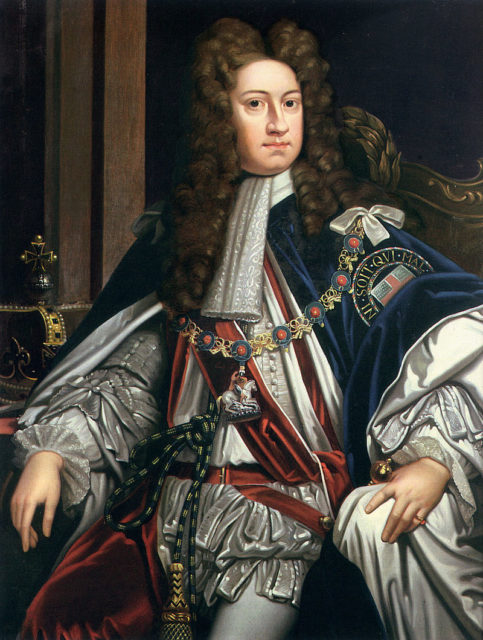 King George I was fascinated by the case.

It’s hard to say why Mary did what she did; maybe she just need rest, maybe she came to enjoy the notoriety, maybe she had what we today would recognize as postpartum depression. But whatever her motivation, she managed to sustain the falsehood long enough to get a free trip to London, after the King’s surgeon verified her story. 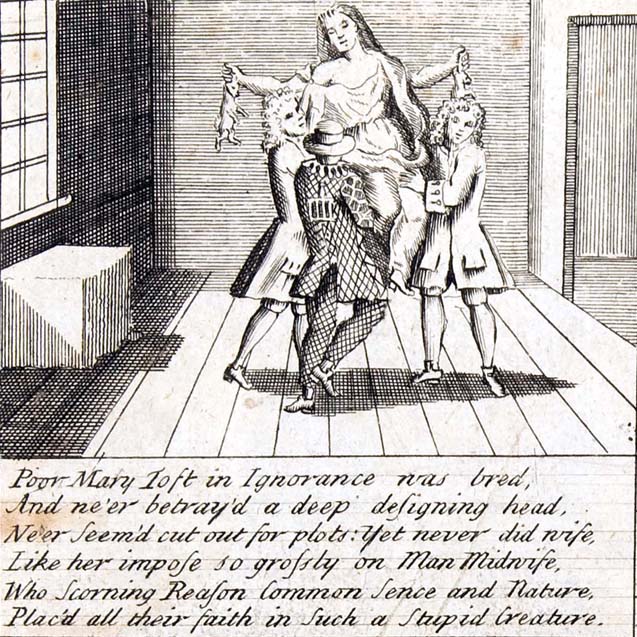 The Doctors in Labour; or a new Whim Wham from Guildford (in Hunterian Aa.7.20) The first stanza of a twelve-stanza illustrated poem detailing the Mary Toft scandal, published in 1726.

St. Andre fell for it, but another expert was sent, the royal surgeon Cyriacus Ahlers, who was dubious from the start. It was he who arranged for Mary to accompany him to London, where she was installed in a room so he and others could “study” her. Not surprisingly, once Mary was in London, no further bunnies bounced out of her womb. 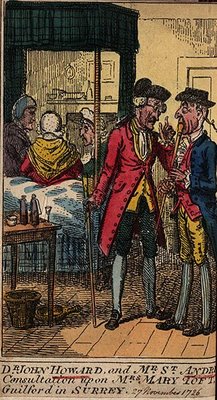 But when Ahlers performed an exam on Mary, he decided the creatures were coming from her fallopian tubes, an inexcusable conclusion for a surgeon to reach. But a lot of so-called experts consulted on the case, and it was only when it was discovered that Mary and her husband had been buying bunnies, and that she had been shoving them into her cervix, that she finally confessed.

The authorities begged, pleaded, cajoled and threatened her with invasive surgery until she couldn’t take it, so she told them the truth. 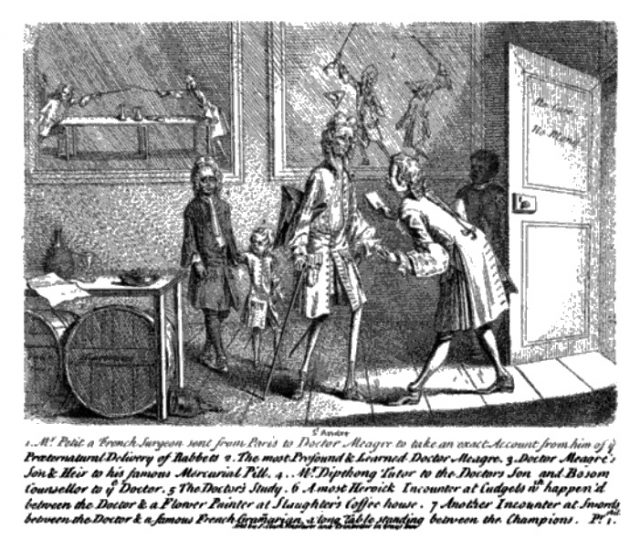 When word got out, these medical experts were held up for public mockery and satire. Newspapers, theaters and even painters got in on the act, mercilessly making fun of them for their gullibility. Howard was particularly ravaged, as he had just published a 40-page pamphlet entitled, “A Short Narration of an Extraordinary Delivery of Rabbits.” The others scrambled to distance themselves from the case.

Nor did Mary escape unscathed. Plays were staged mocking her; newspaper columns denounced her. But she was eventually allowed to return home to Surrey, where she lived to the age of 62, not a bad lifespan for a woman during that period. But her reputation never fully recovered, and needless to say, she never gave birth again.