Many of humankind’s most primal fears come from childhood, and few are as powerful as the Boogeyman. He serves a dual purpose of sparking kids’ imaginations and keeping them in line.

Whether lurking in the closet or hiding under the bed, this spine-tingling concept haunts people long into adult life. The Boogeyman may not be taken as seriously by grown ups — yet when the lights go out, he takes a step closer to becoming real.

Inhabiting the darkness, he either scares children or eats them, depending on how mischievous the parents feel at the time of telling the tale. However he is also part of a rich tapestry of monsters which have become part of family life around the world. 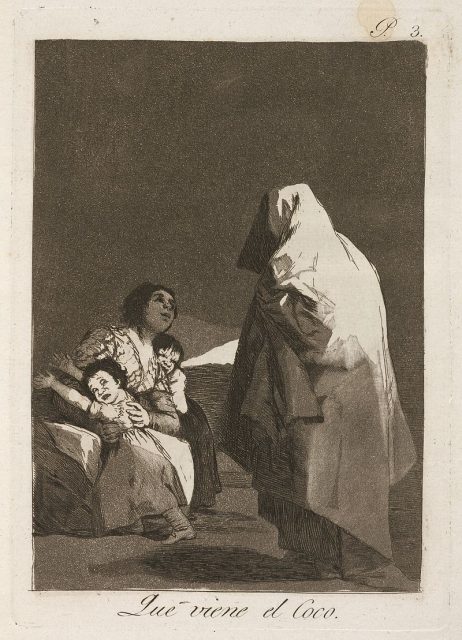 Just as English-speaking countries fear the Boogeyman, other nations have their equivalent. The differences and indeed similarities are fascinating, as are the reasons for their coming into being.

When it comes to the Bokkenrijders or “Buckriders,” the motivation behind the legend was strictly on the adult side. Sounding like something from Pirates of the Caribbean, they are the spirits of thieves from the 18th century, whose mode of transportation is truly unexpected. 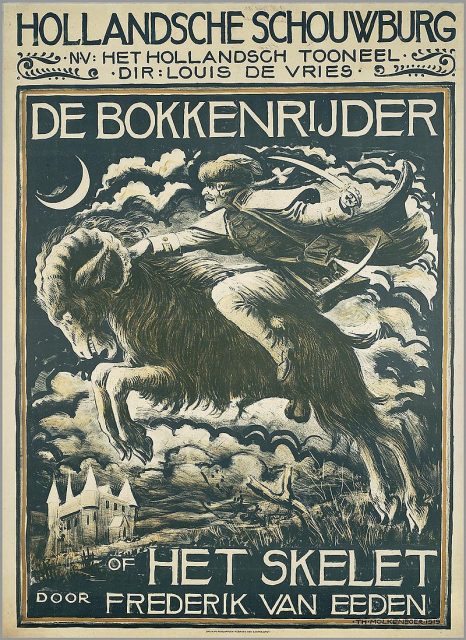 As related on the website of Princeton University, the gang of terrors roamed the province of Limburg in the Netherlands. They “had made a pact with Satan and rode through the sky on the backs of goats.”

The site goes on the mention the intriguing authoritarian aspect to the story, claiming it “would appear to be a myth, deliberately made up by the law enforcers of those days, as a pretext for torturing suspects while investigating some ten burglaries.” 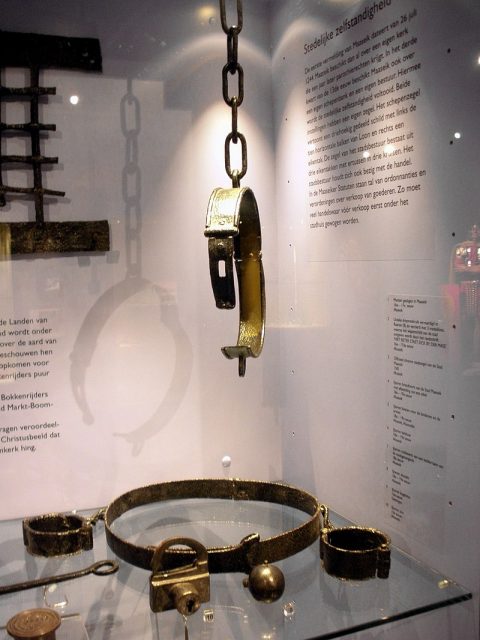 Maaseik, Belgium. Iron collar and cuffs (18th/19th c) in the Regionaal Archeologisch Museum, the local museum of history and archaeology. The objects illustrate the fight against criminal gangs (Bokkenrijders – Goat Riders) in the second half of the 18th century in the region. Photo by Kleon3 CC BY-SA 3.0

“Suspects would be tortured to the extent that they would release new names of the ‘members’ of the gang…. The reason of the law enforcers and judges to take these extreme measures in fighting these petty crimes is unknown.”

Fear of the Bokkenrijders also spread to Belgium and Germany. It’s surprising how far a goat can travel!

The same areas also play host to the Butzemann. This purveyor of fright takes his name from “bôtzen,” a Middle German word meaning to make a loud noise and “verbutzen,” which means disguise. 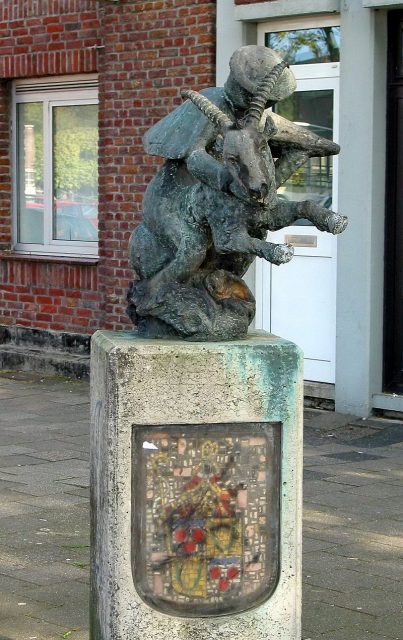 Statue of a goat rider on the marketplace in Schaesberg. Photo by Redfish71 CC BY-SA 3.0

Put these qualities together and you have something distinctively evil. Like the English Boogeyman, he loves the shadowy corners of people’s homes. Though his power to petrify is diminished slightly by his association with a children’s song about a poltergeist called Es tanzt ein Bi-Ba-Butzemann. The catchy title translates as “It dances the Bi-Ba-Butzemann.” 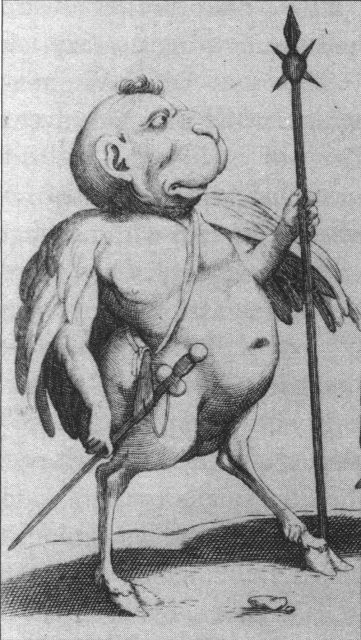 The blog Deitsch Mythology details the folk tale behind the Butzemann, a Pennsylvania Dutch variation which started life as a scarecrow made by a farmer under instruction from a local wise woman. The purpose was to protect his crop from elemental forces and he gave the creation a limp to mirror his own, so it would be part of him. 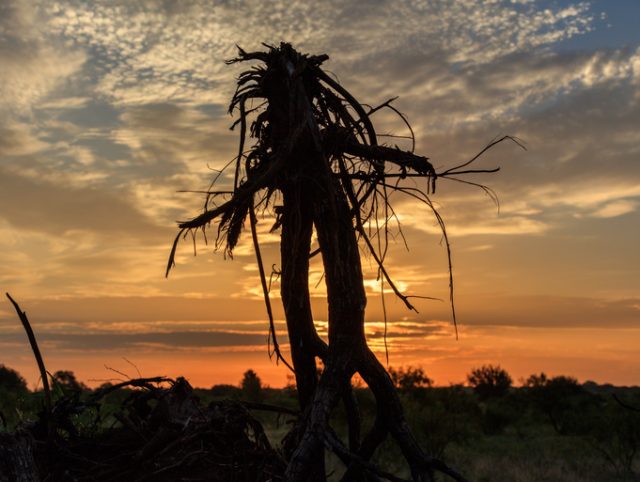 Scarecrow from roots of a tree at sunrise.

Taking the name of Delbel, the scarecrow “would emerge as a spirit from the scarecrow shell. Despite his limp, he learned to fight the Frost Giants and to keep troublesome land spirits at bay.” Unfortunately the farmer died and Delbel found himself in a battle for his very soul.

Stories such as these show there’s far more to the Boogeyman than an unseen and unknowable presence and that some scary legends are underpinned by tragedy.

A particularly tragic background lies in the tale of El Sacoman, or Sack Man, who terrorizes the imaginations of children in Spain as well as Latin America. His name is also spoken in large parts of Southern Europe. 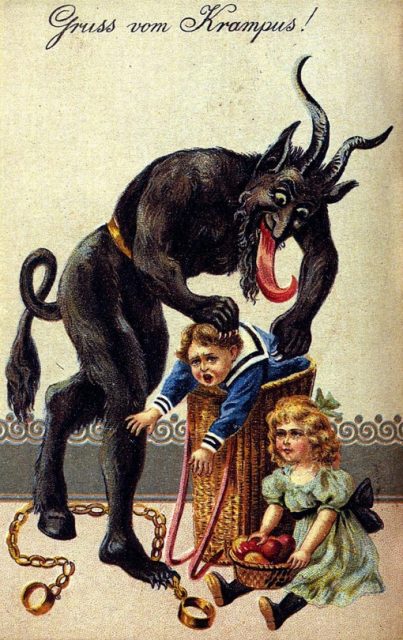 This specter is known for his haggard appearance and the clutching of a sack, into which he scoops up kids who have misbehaved. They are thought to be eaten by the ghoulish child catcher or he sells them, perhaps to other ravenous Boogeymen!

Myths aside, the website Forbes Design refers to the Sack Man as part of an article on urban legends. The story began as a very real and truly horrifying case of child murder at the hands of one Francisco Leóna, a witch doctor. 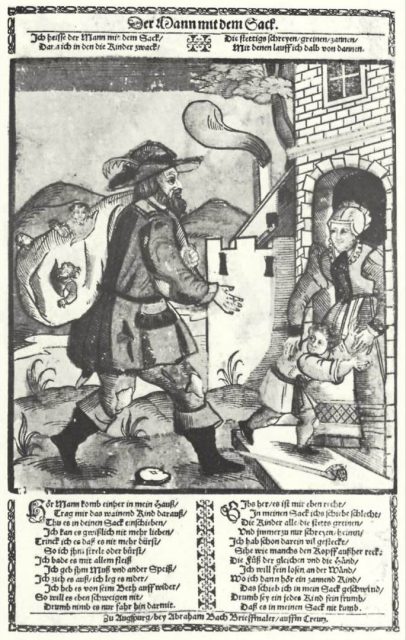 In 1910 he killed a seven year old boy, Bernardo Gonzalez Parra, in the bizarre belief it would cure the tuberculosis of farmer Francisco Ortega. “For a large sum of money, the healer drugged the boy and put him in a sack.”

“He was killed and used as prescribed. Ortega and the healer were both executed… This grim tale is now connected to the legend of a man carrying a black bag. He walks up and down night time streets in Mexico and Latin America, always on the lookout for any children who should not be out or who are misbehaving.”

It’s easy to forget that many Boogeyman tales have a dark origin in folklore and shocking true life crimes. Thankfully they have become an almost cosy part of life, especially during the Halloween holiday, and a tradition that’s passed through the generations. 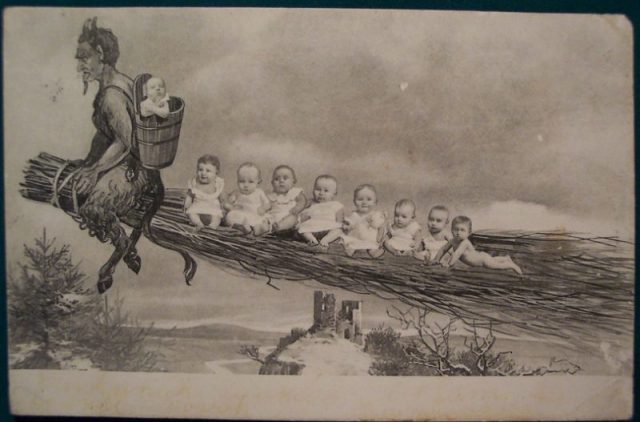 Photo montage of Krampus (the sackman) with children.

On a lighter note, it’s always fun to recall Homer Simpson’s reaction to the Boogeyman in the episode “$pringfield (Or, How I Learned to Stop Worrying and Love Legalized Gambling).” With Marge very firmly out of the picture due to a newly-discovered gambling addiction, it’s left to Homer to look after the kids.

Read another story from us: Dragon Lore: Origins of the Fire-Breathing Beast

When Lisa expresses perfectly normal fears about the Boogeyman, he goes into overdrive, waking the family and positioning them behind a mattress in the living room while brandishing a shotgun. Bearing in mind some of these accounts maybe he has the right idea.

« 750,000 Pets Were Put Down in Britain at the Eve of WWII
The Futuristic Weapon Designs of Leonardo Da Vinci »