Long before the advent of modern artillery, men had only swords, spears, bows and arrows, horses, and well, stones and pitchforks to use.

Creativity was a must if they were to succeed in battle. During the First World War, the Brits dropped leaflets to their enemy troops instructing them how to fake illnesses and get out of active duty, or even better, get shipped back home. And in the same war, the French made fléchettes. 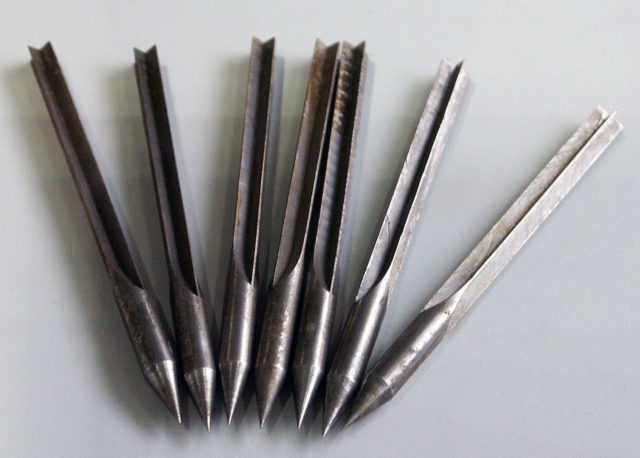 Thousands of them, ranging from five to eight inches long, some even bigger than that. And they were used to create a hailstorm of killer darts, similar to archers’ ranged volleys in times past.

Infantry and manpower was still the primary force used on the battlefield. With a shortage of proper anti-personnel weaponry to stop incoming troops, the French found the perfect solution during the early stages of the war. They are credited as the inventors of deadly darts known as fléchettes. In late 1914, French armed forces began to drop these troop-piercing “little arrows” from planes, directly onto German trenches. 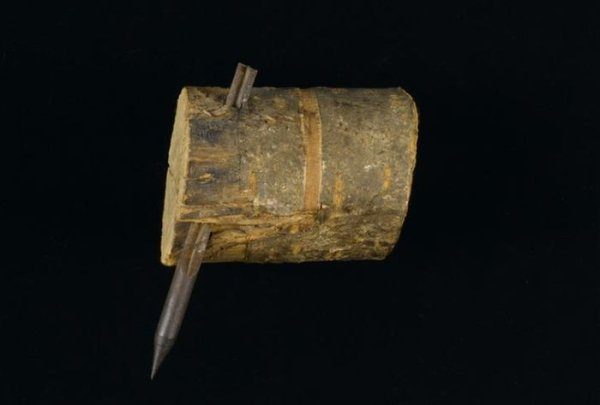 They were steel short rods, sharpened at the tip and weighted to make them fall straight into a fast descent, pulled by gravity. The tail was shaped a cross-section in the form of an “X” that made the darts extremely aerodynamic, explicitly designed so they would fall smoothly through the air to the designated location. 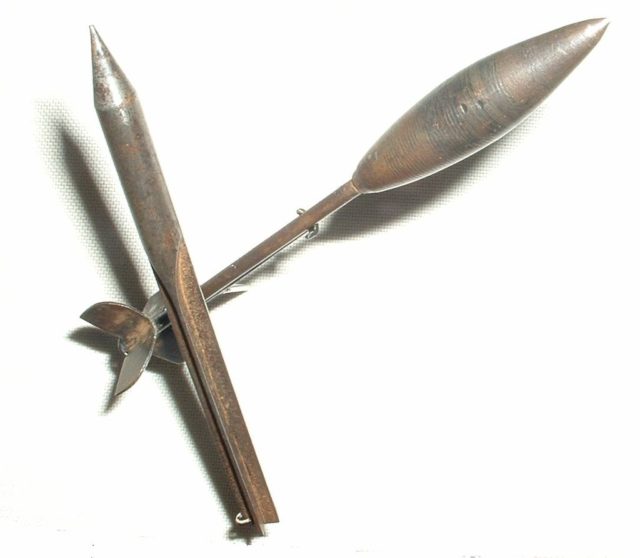 Usually packed in canisters of 200 to 500 hundred pieces, they were placed in a hole under the pilot’s seat in the cockpit with a string attached that would allow the pilot an easy way to deploy the weapons. He simply pulled the string, which opened the containers. In this manner, the fléchettes could cover as much as 500 hundred square yards per canister. 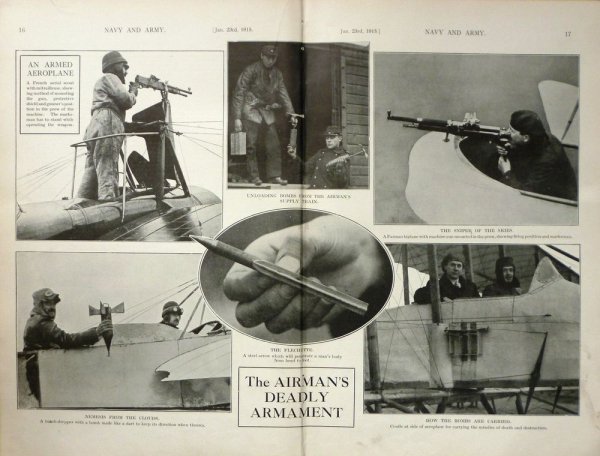 These arrows weren’t the most precise thing in the world but they proved more than adequate to instill fear in whoever was down below. Their real purpose was to break the enemy lines because potentially they could cause devastating injuries. 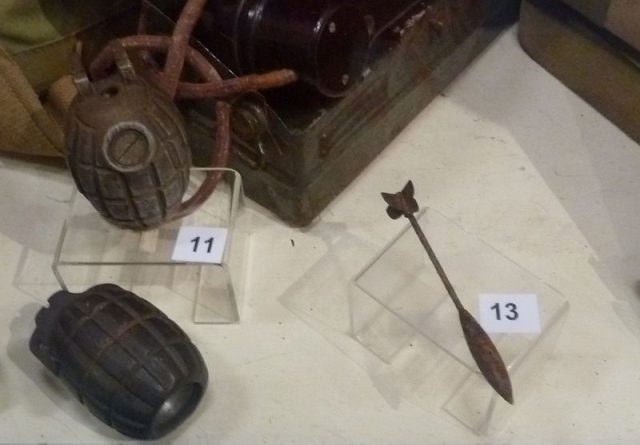 The idea was, the higher the altitude, the larger the area covered and the more powerful the impact was, therefore the more damage they could do. The risk of slightly missing the target grew proportionally with the height of the aircraft, but it was a risk worth taking because they were very cost-effective.

Recognizing fléchettes’ true value for the money, for essentially they were nothing but elaborate nails, and having experienced what they could do first hand, the Germans soon embraced the same tactic and began producing their own little killer darts.

But shrewd and sly as they were, they gave them a unique touch and engraved an inscription on them in production. It read: François, Fabrication Allemande, or translated, “Frenchman, made in Germany.” The idea apparently was to give their enemy a taste of their own medicine. 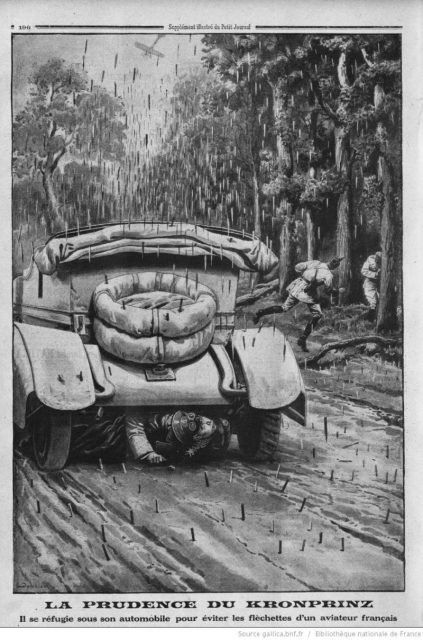 But these two were not the only ones to use fléchettes in the Great War. They were also added to the British arsenal, though their pilots allegedly were vehemently against it, believing that it was an “ungentlemanly” way to fight. 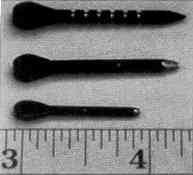 Fléchettes were eventually replaced by bombs and were used less and less as the war went on. They fell into obscurity until the 1960s, when they found use once more by the U.S. in Vietnam.

The were initially introduced to the war zone as ammo for the 12 gauge Bushmaster 870 shotgun, which was loaded with 24 flechettes. The weapon was considered relatively quiet but extremely dangerous and very effective. Victims would be riddled with so many small holes that, even if they weren’t killed by the impact, they would quickly bleed out and die. But first, in extreme pain and a state of panic, it was hoped they would talk and answer every question asked. 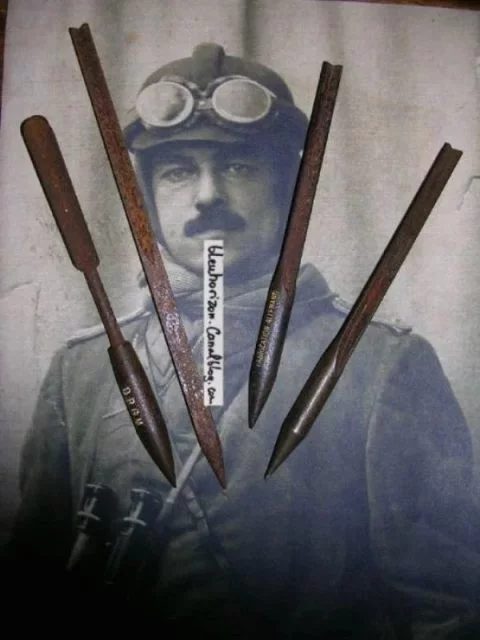 You can understand the terror they caused.

Known as beehive rounds, fléchettes were extensively used in larger weapons such as the M79 and 105mm howitzer as the war progressed, and also as dropped ordinance, just as they had been deployed in WWI.

Following the Vietnam conflict, the International Community labeled the use of fléchettes as inhumane. But they are still used until this day nevertheless, most recently by the Israeli military forces in their operations in Gaza.

The Palestinian Centre for Human Rights and human rights activists, according to The Guardian, accused their enemies in July 2014 of firing shells “that sprayed out thousands of tiny lethal darts” directly at the village of Khauzaa, near Khan Younis in the southern Gaza Strip.