We have built astonishing pyramids all over the planet, and wonders such as Stonehenge or Angkor Wat, and even entire underground cities such as those found in Turkey. Yet, if there is another competing architect on planet Earth, that’s the planet herself.

Think of the Grand Canyon, Niagara waterfalls, or Ayers Rock. However, nature never sits still. She is always rearranging her landscapes and over time, we have lost some remarkable sights from our view. Or at least, the face of these places altered so much, their glory by now has been long lost.

In the United States, we have lost the extraordinary sight of Jump-Off Joe. Early photographs from the 1890s and 1910s beautifully depict this sandstone formation that resembles the shape of a shoe.

This was a very famous age-old sea stack, as high as 100 feet, and it adorned the coast of Nye Beach in Newport, OR.

In its heyday, before World War I, Jump-off Joe animated stories among both Native Americans and settlers. People come to Nye Beach just to enjoy the sight of the odd rock formation.

A local business flourished by selling postcards of the landmark. When Jump-off Joe’s arch crumbled in 1916, it was the beginning of the end. A couple of decades later, the remains of the landmark were entirely washed away by the sea.

And arches just seem destined to crumble. In 2008, Utah’s Arches National Park lost the Wall Arch, its 12th biggest arch and one of the most distinguished park features. 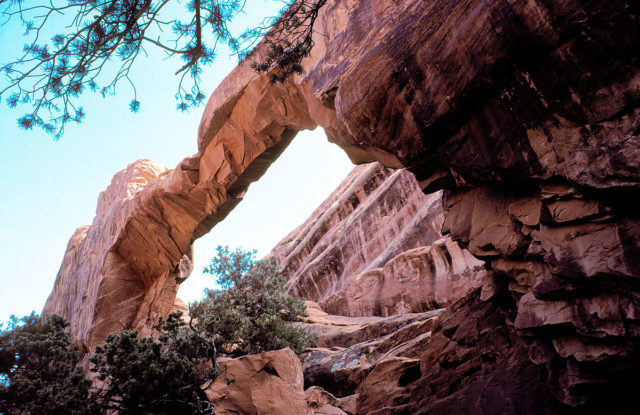 Wall Arch was identified in 1948. Composed of an atypical Entrada Sandstone sediment dated to the Jurassic era, Wall Arch made a compelling park view for decades. Its collapse in 2008 was sudden. 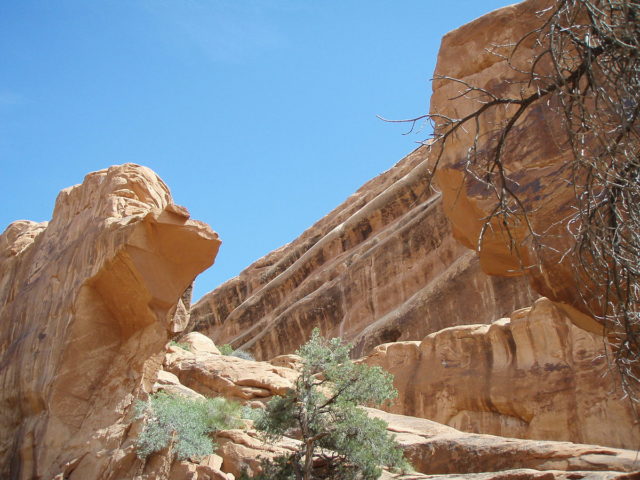 Wall Arch within days after the collapse.

Park officials were aware of fractures that appeared on the arch, but nobody foresaw such a hasty demise. Previously, the park coped with the loss of a similar-sized arch in 1991. Fortunately, there are 2,000 more arches left in the Utah park. 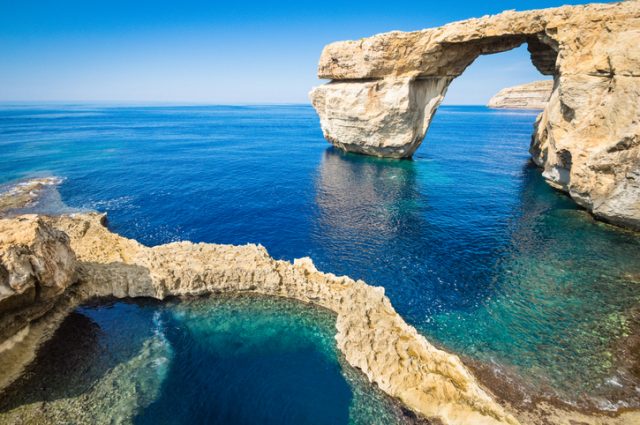 More recently, Malta’s Azure Window tumbled on the morning of March 8, 2017 after a heavy storm battered the entire area.

The limestone natural arch, a noted cliff-jumping location that appeared even in the Games of Thrones show, was situated on Malta’s island of Gozo. It was one of the most visited landmarks on the entire Maltese archipelago. 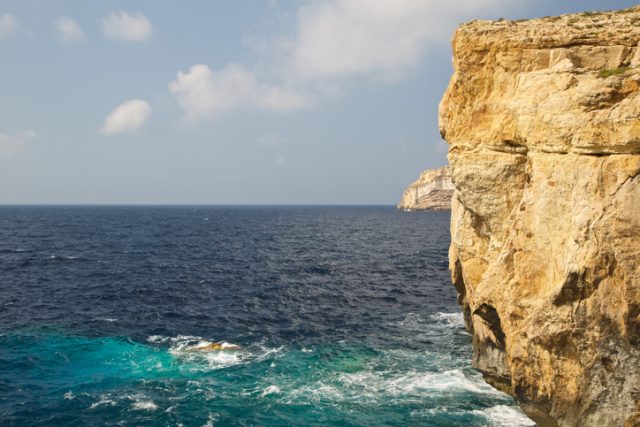 Azure Window on the island of Gozo collapsed.

Have storms at sea claimed other wonders of nature? The short answer is yes. In 2005, the violent tropical storm Delta conquered Gran Canaria’s odd formation El Dedo de Dios (God’s Finger). After the storm, when its upper part plunged in the sea, the site no longer looked so special. 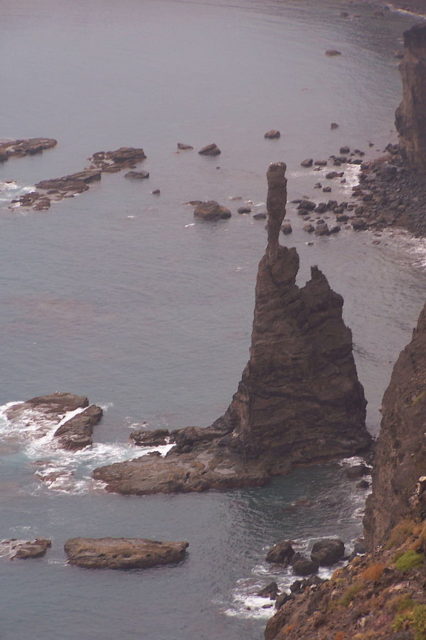 El Dedo de Dios stood on the north of the island, where the oldest rocks are dated to 14 million years. The extraordinary sea stack, which inspired poets and artists, would have needed at least 200,000 years to gain its unearthly form. 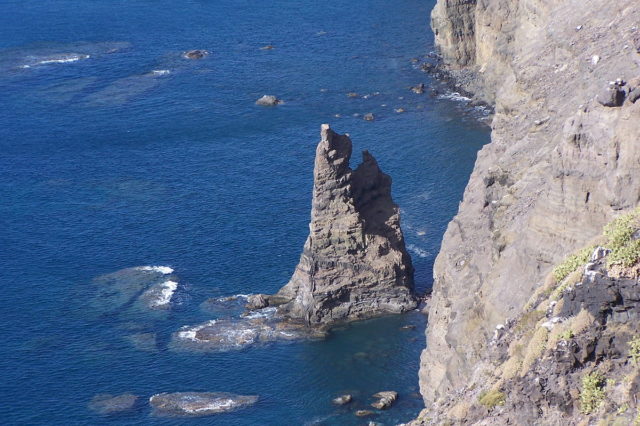 And in Africa, far away on the south in Namibia, there existed one more “God’s Finger.” For about 50,000 years, the unique rock known as Mukurob stood in the Namib desert, until it broke to pieces at the end of 1988. It rose 40 feet towards the sky and weighed roughly 500 tones. 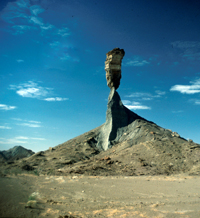 Mukurob was worshiped by the local population. It was the source of countless stories narrated by the Nama people and is even meddles with politics. People supposedly used to say that Mukurob might break to pieces only once Namibia is free of foreign rule. 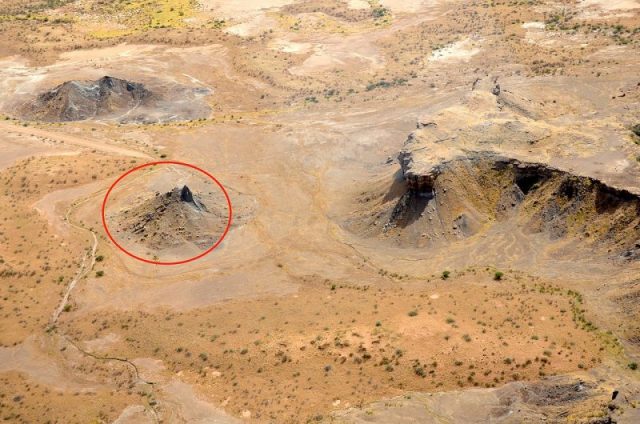 Mukurob fell on the eve of December 7, 1988, at around the same time when South Africa agreed to relinquish control of its neighbor. Namibia went on to officially declare independence in 1990.

Heavy rains poured the night that the rock crumbled, but a later study suggested another reason for its fall. Perhaps Mukurob fell because of the violent Spitak earthquake which destroyed over 20 towns and hundreds of villages.

The epicenter of this earthquake was miles and continents away — in Armenia. But when it hit on that same December date that year, the quake was recorded in Namibia too. 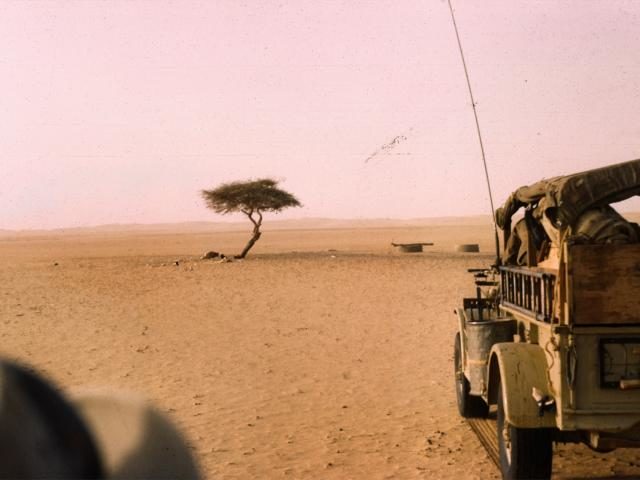 Arbre du Ténéré in 1961. The tree was destroyed in 1973 and has been replaced by a monument. Photo by Michel Mazeau CC BY-SA 2.

More odd events, or this time rather a stupid human mistake? In 1973, a drunk truck driver carelessly claimed another African gem — the Ténéré tree. A member of the acacia species, this lonesome landmark tree was the only living thing in a radius of over 200 miles, in the Nigerian part of the Sahara.

Before it died, the Ténéré tree was an uplifting sight for numerous travelers who followed the ancient pass in this corner of Earth’s biggest desert. It was also a last-standing reminder of the times when the Sahara was abundant with life. The tree’s roots, miraculously enough, reached as far as 120 feet underneath the surface.

Last but not least, stunning natural landmarks have been lost in New Zealand, and time seems to be ticking for one wonder in Australia.

In the 19th century, a volcanic eruption of New Zealand’s Mount Tarawera wiped out what was once hailed the eighth wonder of the world — the Pink and White Terraces at Lake Rotomahana. 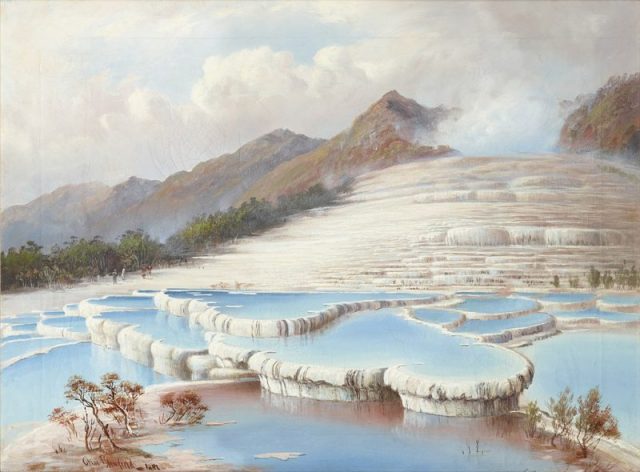 White Terraces, near Rotorua, New Zealand. These were destroyed by a volcanic eruption in 1884.

The hazardous eruption occurred one summer day in 1886 and battered the five-centuries-old natural wonder.

The terraces were created out of silica-rich water, pouring down the hill slopes from hot boiling geysers.

In the process, the water transformed the hilly landscapes into colorful pools and terraces, with glorious waterfalls and staircases that attracted visitors from all over the world. All that is now left of the Pink and White Terraces is old paintings and photographs. 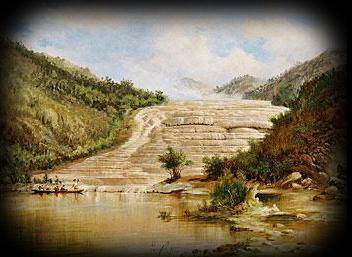 Meanwhile, ocean waves and winds are altering another magnificent site nearby, the 12 Apostles in Australia.

A real feast for the eyes, the 12 Apostles (which are not actually 12) are located a four-hour drive away from Melbourne, along the Pacific Ocean Road. 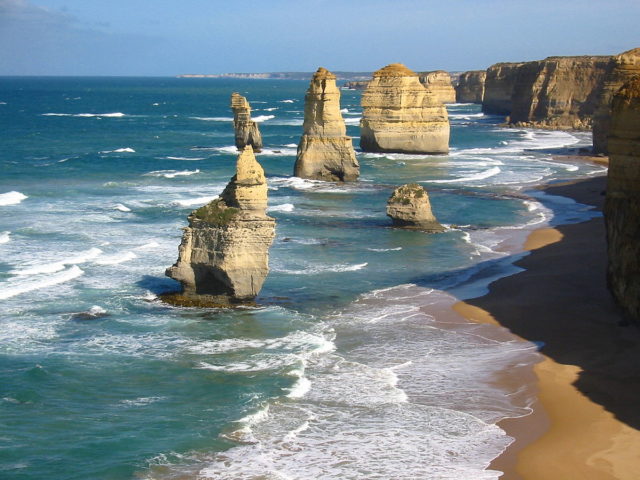 The twelve apostles before the collapse, 2003. Photo by Cookaa CC BY-SA 3.0

Persistent erosion shaped part of the limestone cliffs of the Victoria mainland into the sight of the 12 Apostles. The process produced caves inside the cliffs which, over the period of millions of years, became sea stacks.

Each stack reaches a height of up to 145 feet. The site is breathtaking especially during sunrise and sunset time, when the yellowish color of the sea stack appears to take on a darker hue. 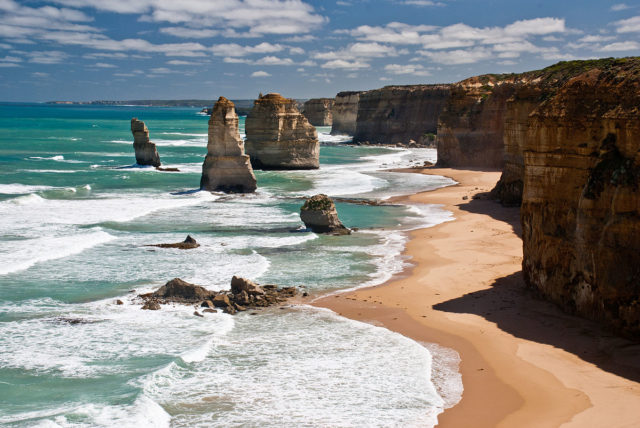 Until 2005, these strange formations numbered a total of nine, but that year one of the bunch plunged in the water. Time will likely claim more stacks as it passes.

Yet, the 12 Apostles might be a never-ending work in process. Erosion keeps taking its toll on the huge cliff facing the sea stacks. Perhaps hundreds, if not thousands of years from now, some entirely different humanity will look at the site which we once called the 12 Apostles and see a different constellation of sea stacks waiting again for time to pass.

« The Role of Freemasons in Founding the United States
Bickering Royalty: The Ridiculous Marriage of Drunk George IV and Princess Caroline »