The King who Placed his Deceased Wife on the Throne

There was a love story in 14th century Portugal like no other. It beats any Shakespearean tragedy, and every child in Portugal knows it by heart.

It all began in about 1340 when Portugal and Spain were often in discord, and there were frequent tensions of potential war. And as we all know, political disputes in the past were quite often solved with marriages within the aristocracy. 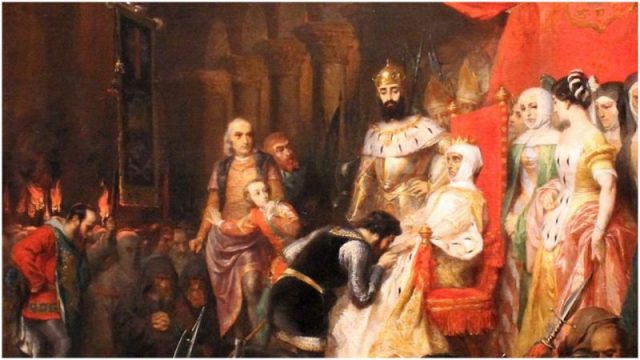 King Pedro at the knees of the dead Queen Ines.

At the time, Afonso IV, the King of Portugal, saw a great interest in entering into an alliance with Juan Manuel, the Prince of Villena, a feudal state in the kingdom of Castile located in southern Spain.

According to England and Iberia in the Middle Ages, 12th–15th Century a marriage was negotiated between Constanza Manuel of Villena and Dom Pedro, the future King of Portugal. Constanza left Spain along with her lady-in-waiting Inês de Castro. 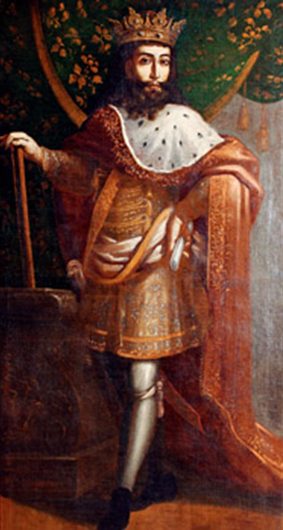 Pedro I, King of Portugal.

The moment Pedro laid eyes on Inês, he was head-over-heels in love with her. Inês was 15–years-old.

She was very beautiful and elegant, with eyes as blue as the sky, and skin so white that when she drank wine one could see it flowing through her throat. She was also descended from noble Galician and Portuguese lines, and illegitimately, from the Castilian royal house. 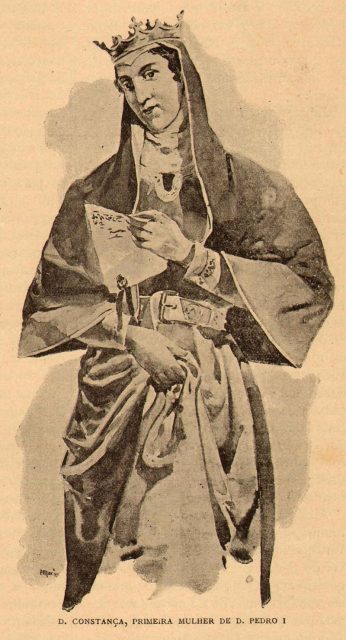 Inês and Pedro began a secret adulterous love affair that became public after the death of Constanza in 1345. King Afonso IV was always opposed to the relationship, and banished Inês from the court and sent her to live in exile in the castle of Albuquerque. But nothing could prevent the lovers from seeing each other.

After 1345, when Constanza died, they started living as a married couple and grew even closer to each other. They even had four children together.

Pedro became close with Inês’ brothers as well. Rumors began to spread that there was a plan of disinheriting the true heir to the throne, Dom Fernando, the son of Pedro and Constanza, in favor of the children of Inês. 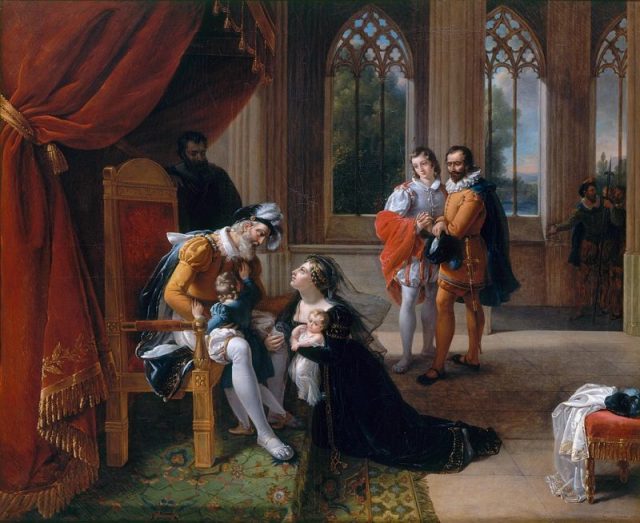 Inês de Castro with Her Children at the Feet of Afonso IV, King of Portugal, Seeking Clemency for Her Husband, Don Pedro, 1335. Painting by Eugénie Servières, 1822.

Pedro’s devotion and closeness to Inês alarmed the nobles within the court who feared Castilian dominance of Portugal. And still, in 1354, Pedro legally married Inês legitimizing their children. The Portuguese nobles pressured King Afonso IV to settle the matter.

With not many options left, one morning in January 1355, the king and three assassins visited the Convento de Sta Clara-a-Velha in Coimbra, where Pedro and Inês lived with their children.

12 Ye Olde English insults we could use today

Pedro was out hunting, and the killers found Inês with one of her children and murdered her in front of the child. She was 29-years-old when she died. When Pedro returned to the house, he was devastated to learn that the love of his life had been killed. 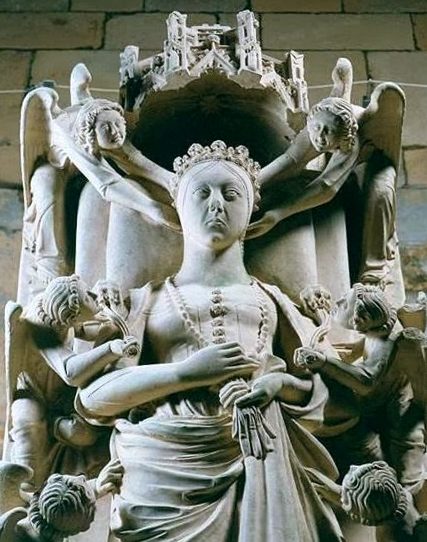 Recumbent effigy on the tomb of Inês de Castro, Posthumous Queen of Portugal.

When he found out that his father was behind the plot of disposing of Inês, Pedro declared war against him, launching Portugal into a civil war. King Alfonso IV died two years later, in 1357, and Pedro, the only male surviving offspring, ascended the throne of Portugal. 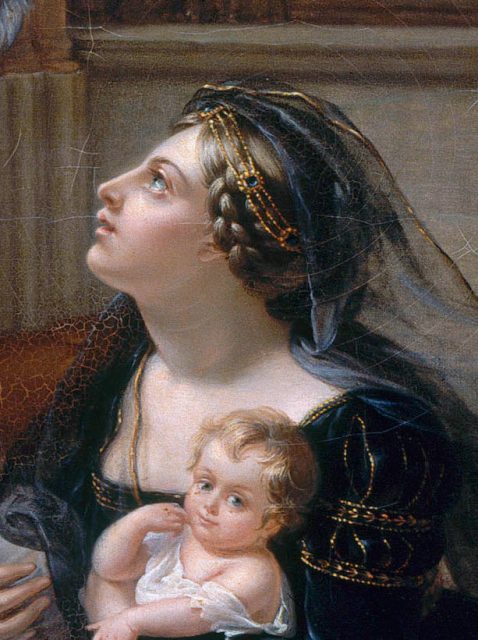 Inês de Castro with Her Children at the Feet of Afonso IV, King of Portugal, Seeking Clemency for Her Husband, Don Pedro, 1335

His first three orders included a snow-white marble sarcophagus of wondrous beauty to be carved — and the killers of Inês de Castro to be found and brought in front of him. Two were found, and one managed to escape. He executed the two by ripping their hearts out, one from the chest and the other from his back, while they were still alive. 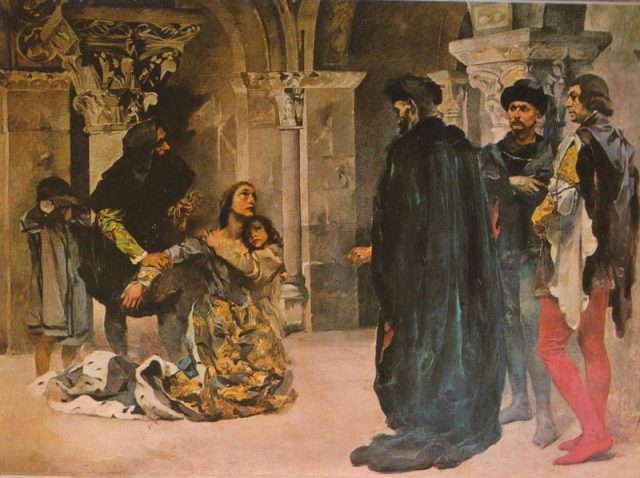 According to some sources in The Popular Encyclopedia from 1836, the third order was for the corpse of Inês to be exhumed from her grave in the church of Santa Clara, dressed in finery and propped up in the throne room. 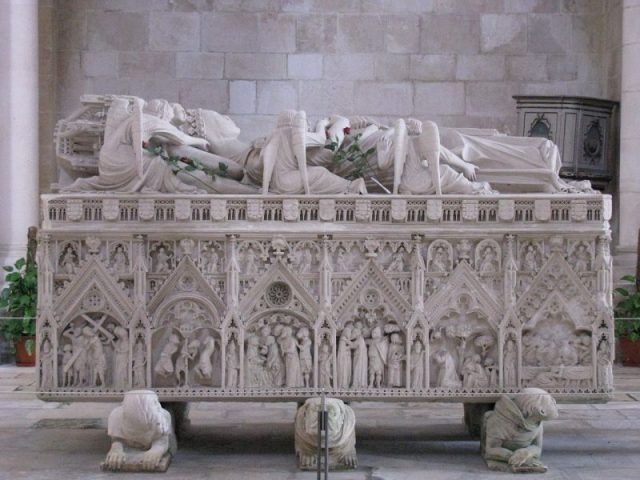 Then he forced the noblemen, the clergy, and peasants to bow before his dead queen and kiss her hand.

Read another story from us: Time Travel – Two Academics Claimed to have seen Marie Antoinette in 1901

The love affair that was in the heart of the father-son conflict inspired many writers and over twenty operas, including the poem Os Lusíadas by Luís de Camões, which is considered as a Portuguese national epic, Inez de Castro by Mary Russell Mitford, and La Reine Morte, a French drama by Henry de Montherlant.

« Michael Jackson and Paul McCartney’s Feud Over Beatles Song Rights
Why is it that in almost 50 years we haven’t gone back to the Moon? »