The Montgolfier brothers launched the first hot-air balloon in 1783. It wasn’t long after that inventors began experimenting with ways to control and steer lighter-than-air aircraft, according to the website Space.

The difficulty with such structures was that, left to their own devices, they could only offer a one-way trip, carried along in whatever direction the wind was blowing. 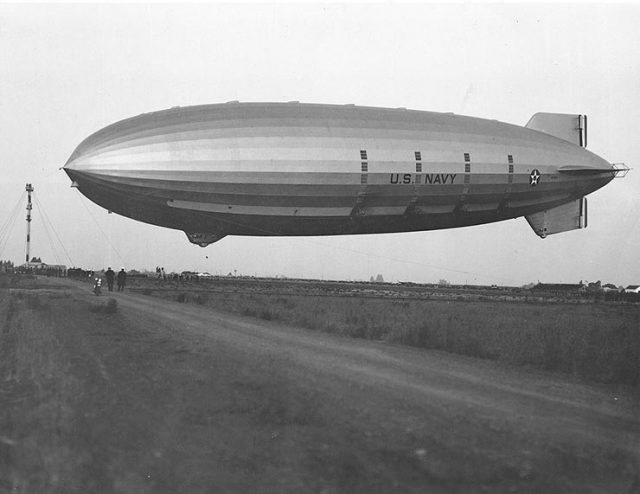 For them to be useful, there needed to be a way to steer them. In 1850 Pierre Julien of Villejuif demonstrated a model for a cigar-shaped airship, with a rudder, elevator, and gondola mounted underneath the front of the balloon.

It had a clockwork motor that turned two air screws on either side of the center, which would propel the ship, and a light metal frame to give the airship shape and support. It was an idea designers could run with, and they did. 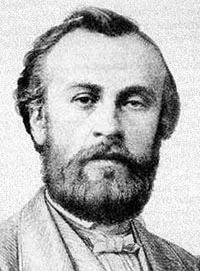 Jules Henri Giffard, a French engineer, built the first full-size airship, with a small steam-powered engine that drove the propeller.

It took its first flight in 1852 and traveled 17 miles. It was discovered, however, that the small engine still couldn’t overcome windy conditions in terms of steering the airship. It wasn’t until 1884 that an airship made its first successful round trip. 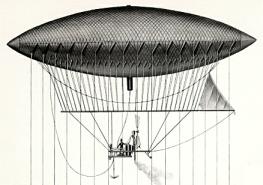 The Giffard dirigible, created by Giffard in 1852

From the early 20th century, the U.S. military has been interested in lighter-than-air craft, according to the San Diego Union Tribune. Between the world wars, the Navy constructed several enormous, helium-filled airships, also known as dirigibles. One of them was the USS Akron, known as The Queen of the Skies. 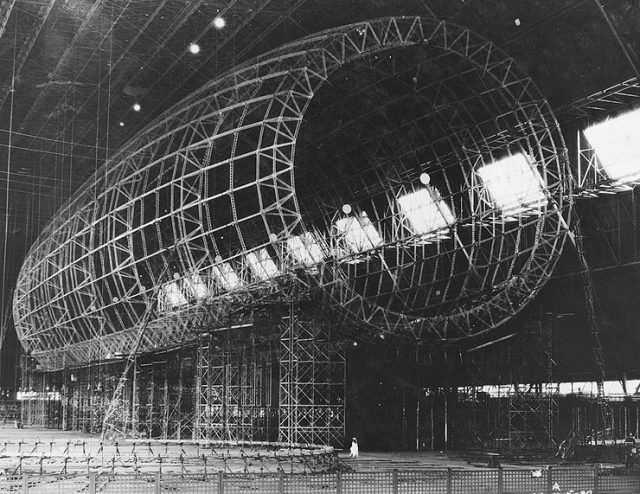 Akron under construction in the Goodyear Airdock at Akron, Ohio in November 1930. Note the three-dimensional, deep rings.

The Akron was designed to be a warship and the world’s first flying aircraft carrier. It had a crew of 89 and was protected by seven machine guns.

The Akron, and her sister ship, the USS Macon, were meant to be reconnaissance craft. Even under the most ideal of circumstances, though, flying and controlling a lighter-than-air craft is a chancy and difficult thing. 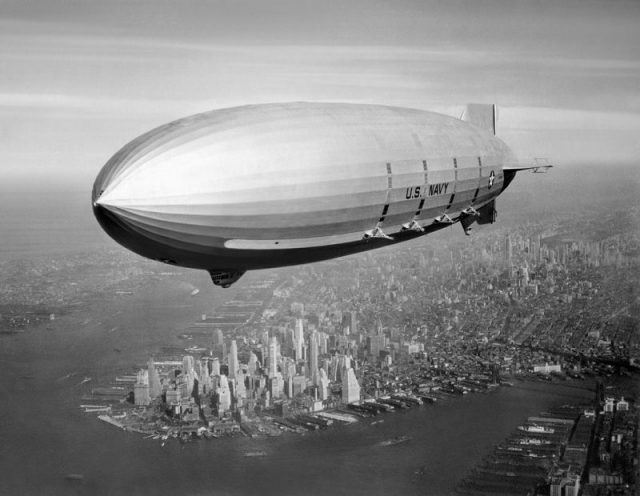 In May 1932, the USS Akron left its Lakehurst, New Jersey base to fly to San Diego. After 77 hours of flight and encountering a sandstorm crossing over West Texas, the Akron reached the parade field at Camp Kearney, where it was supposed to land on the morning of May 11th.

It was a foggy morning in San Diego, but the Akron finally hit clear skies at around 1200 feet which caused another issue – the morning sun was heating the helium inside and making the airship more buoyant. 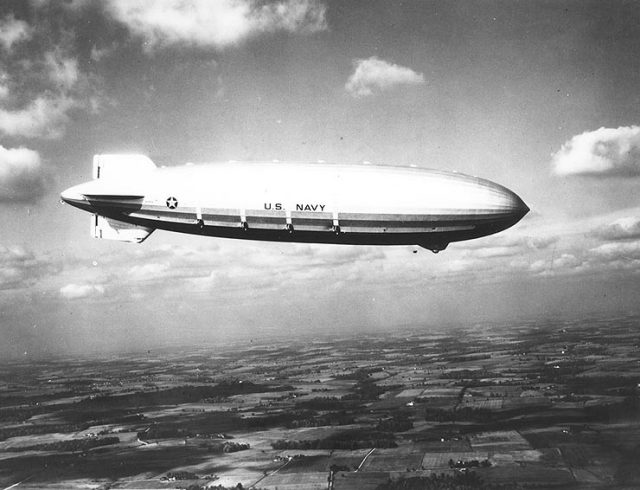 The maiden voyage of the Akron on November 2, 1931, showing her four starboard propellers. The engines’ water reclaiming devices appear as white strips above each propeller. The emergency rear control cabin is visible in the lower fin.

When the Akron was low enough, it dropped docking ropes to two groups of sailors on the ground, and the sailors each grabbed one of the ropes to attach it to fixed lines with wooden toggles on the ground and then attach it to a mooring cable connected to the mooring mast.

As the dirigible slowly descended, the crews on the ground worked hard to hold it in place, but suddenly the Akron’s tail rose up, nearly putting its nose to the ground. This caused tons of water to be released from the ballast bags weighing the ship down, and the ship began to rise. 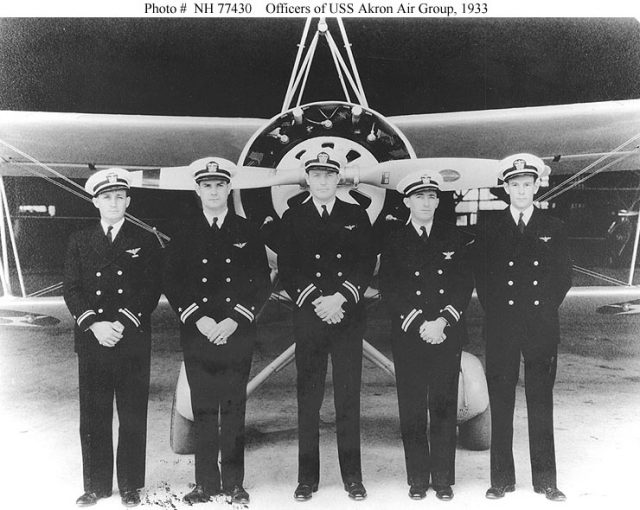 The sailors holding the craft let the trail ropes go, and the Akron pulled free of the mooring mast; however, several men were still holding on to the mooring cable at the time.

One man let go when he was 15 feet off the ground and broke an arm in the fall, but was otherwise all right. Three others were still clinging to the cable. Two of the remaining men fell between 100 and 200 feet, dying as a result. 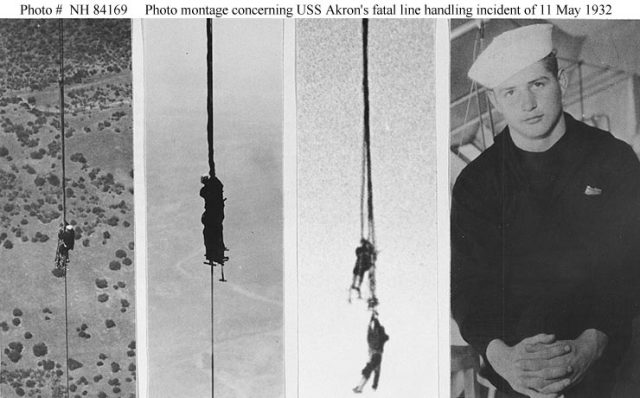 Still pictures from May 11, 1932 incident: the two pictures on the left and the picture at far right are of Seaman Cowart; the picture second from right shows Henton and Edsall before their fatal fall.

The remaining sailor, C. M. Cowart, found a way to tie himself on, and after two hours and help from a sailor on the Akron, Cowart was reeled into the dirigible, and the craft landed again that evening.

Cowart was named a hero, and a court of inquiry would cite the inexperience of the landing crew as the cause of the incident, along with unusual weather conditions.

Several months after the events in San Diego, the Akron went down in a thunderstorm off the coast of New Jersey.  Only three of its 76 passengers survived. Its sister ship, the Macon, continued to be in use for the next two years, but ultimately it too crashed in the ocean off Point Sur in 1935, putting an end to the Navy’s dreams of an airship program.