During a time when Americans would stand in line for hours just to get a loaf of bread, one of the most massive construction projects in history was underway in the Black Canyon of the Colorado River.

The great Hoover Dam stands as tall as a 60 story building. Its base is as thick as two football fields. Its construction employed enough concrete to pave a stretch of road long enough to span the continental United States — from San Francisco to New York City.

In spite of only taking five years to build, it’s taller and all the Seven Wonders of the ancient world, including the Pyramid of Giza and strong enough to hold back all the water pouring over Niagara Falls. 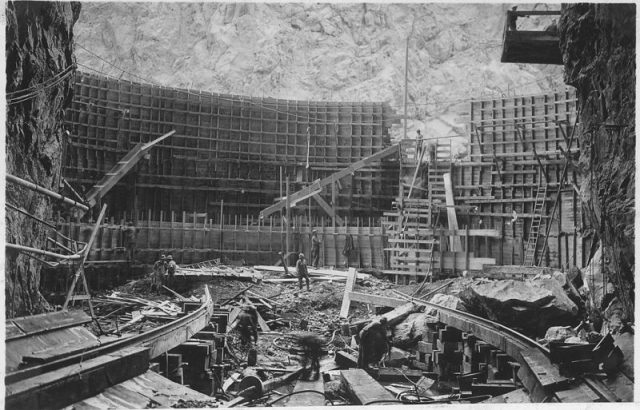 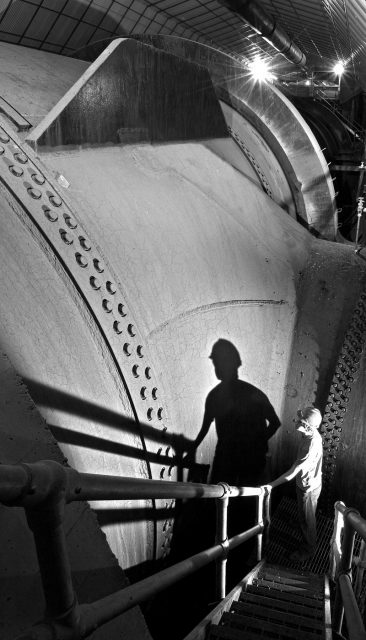 A worker stands by the 30 ft (9.1 m) diameter Nevada penstock before its junction with another penstock that delivers water to a turbine. Photo by Jeffrey G. Katz CC BY 3.0 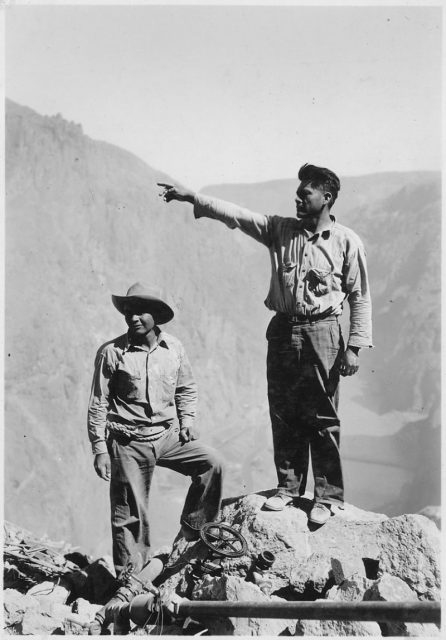 Apache employed as high-scalers on the construction of Hoover Dam. 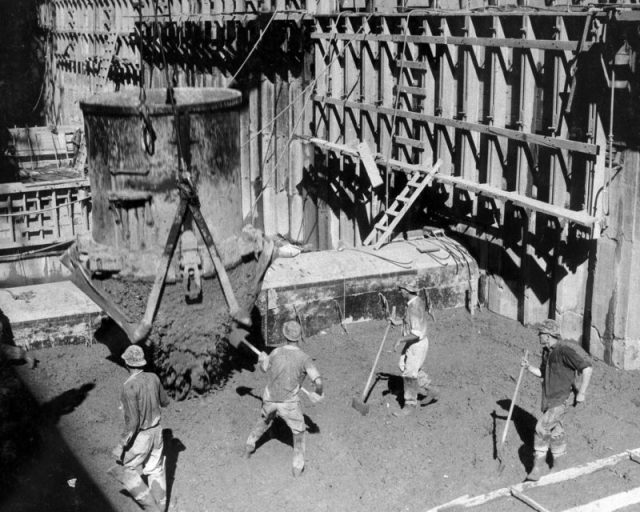 Concrete sluices from a bucket to a form at Hoover Dam, workers prepare to flatten out the pour. 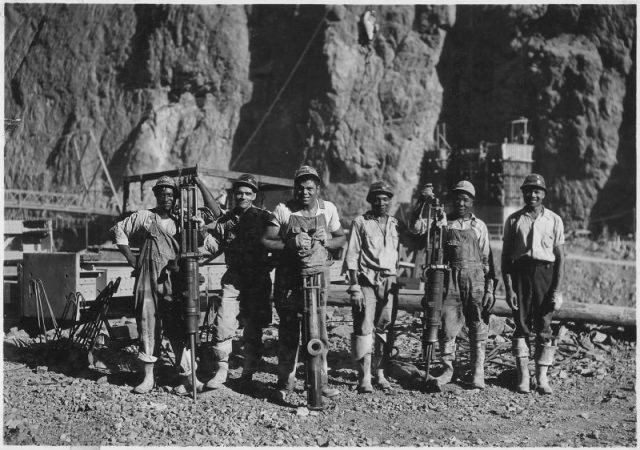 Drillers on the construction of Hoover Dam. 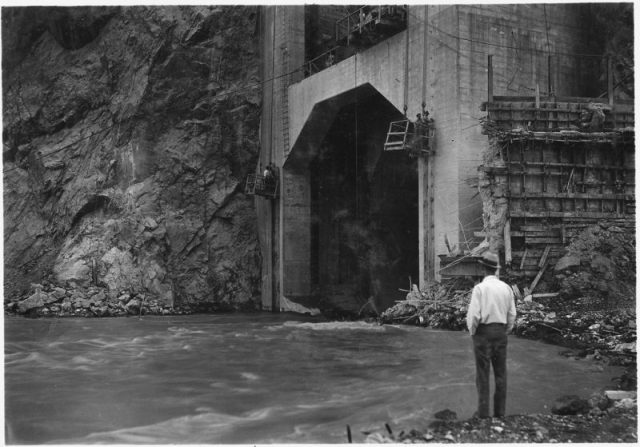 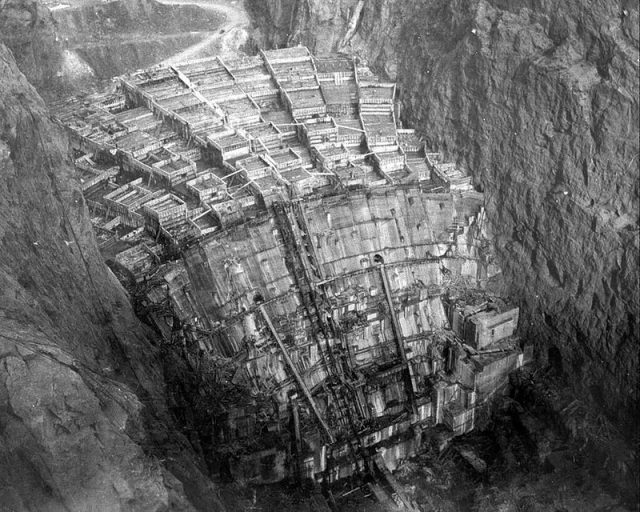 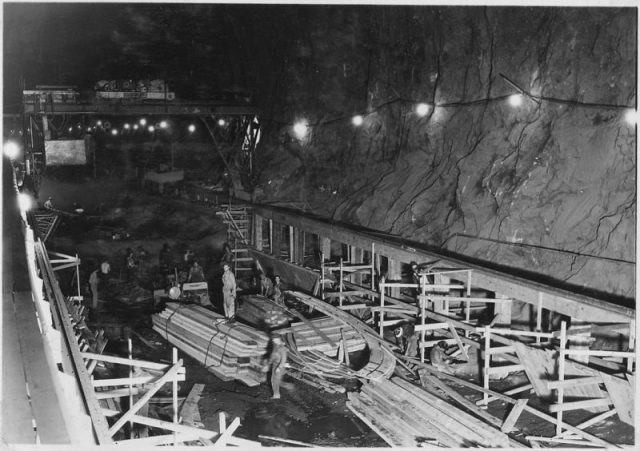 The behemoth building project started in 1931 — a whopping 29 years after engineer Arthur Powell Davis had the vision to build it. His goal was to keep downstream farming communities from being devastated by the floods coming out of the Colorado River.

But the Hoover Dam would also provide a dependable supply of irrigation water to the surrounding areas, even as far as Los Angeles and Southern California.

When the plans for the dam were finally drawn up in 1922, professional engineers deemed the building project “impossible.” Nevertheless, once underway, the project employed scores of Las Vegas men who were desperately out of work as a result of the Great Depression.

Some of these men rode in from out of state with their families and waited for a year to have the opportunity to work on the project.

This exploded the population of Las Vegas from 5,000 to around 15,000 by the time the project started. 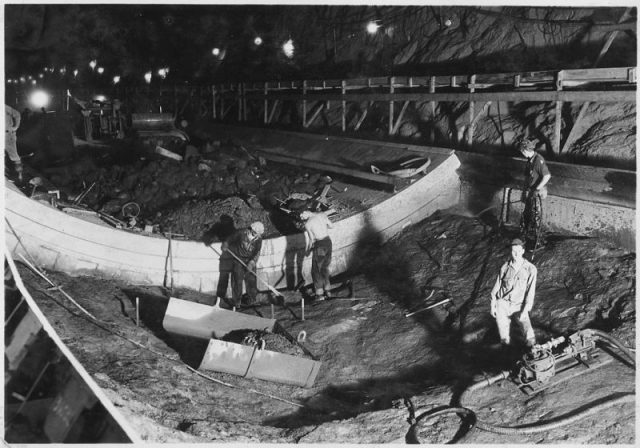 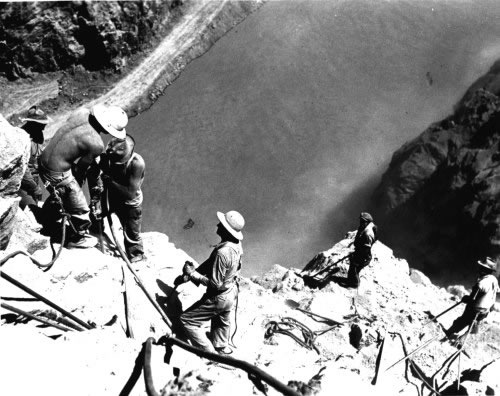 Looking down at high scalers above the Colorado River. 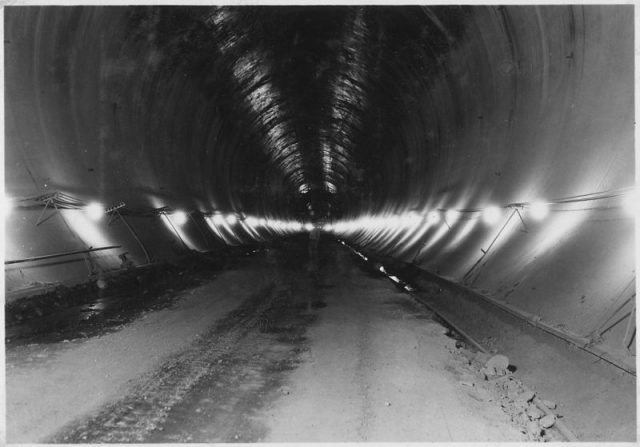 Looking downstream through Diversion Tunnel No. 2. 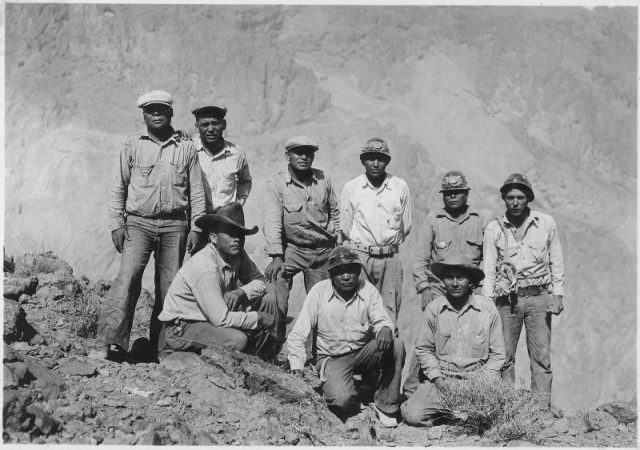 Native Americans employed on the construction of Hoover Dam as high-scalers. 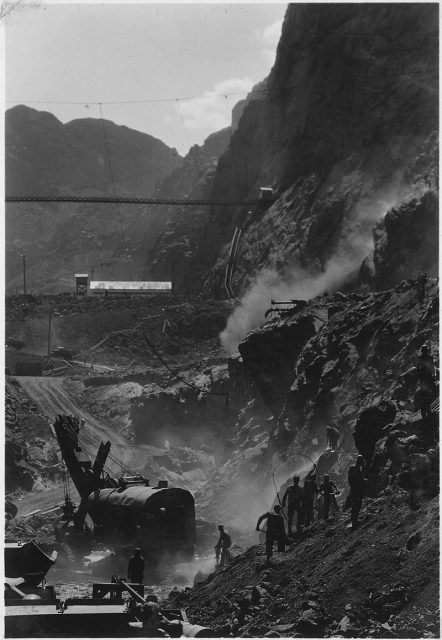 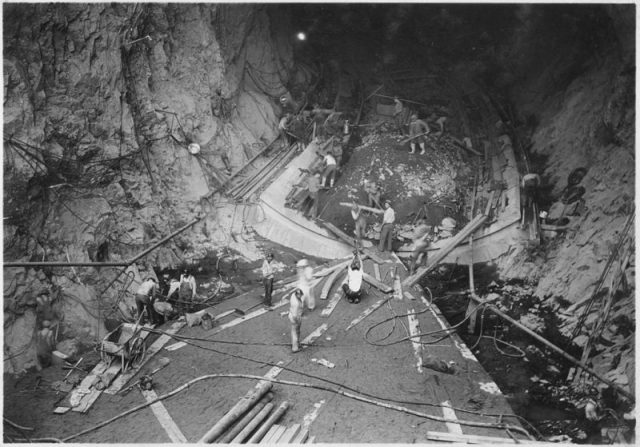 Operations at inlet portal of diversion tunnel No. 2. Invert concrete and trashrack transition base are seen. 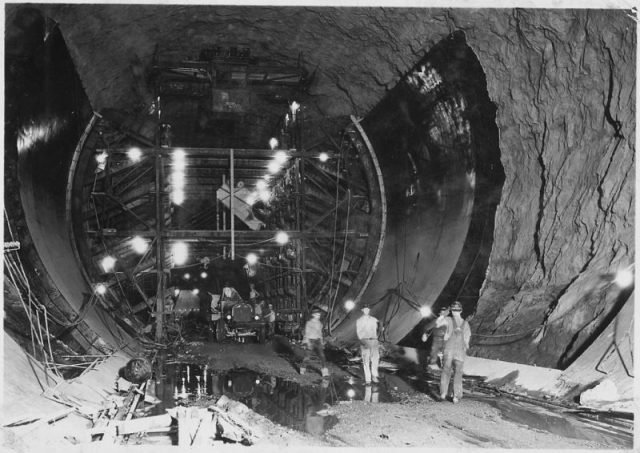 Pouring side wall concrete in diversion tunnel No. 4. 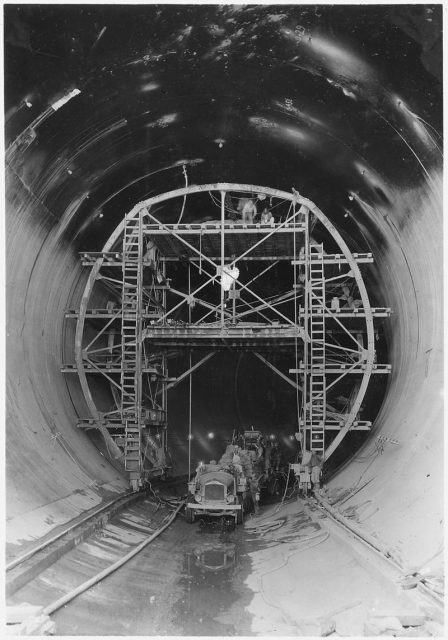 Pressure grouting jumbo in operation in Diversion Tunnel No. 4. 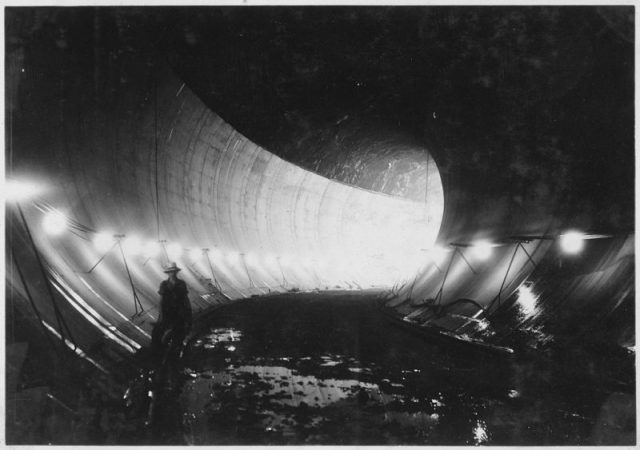 Side-wall concrete in place in diversion tunnel No. 2. 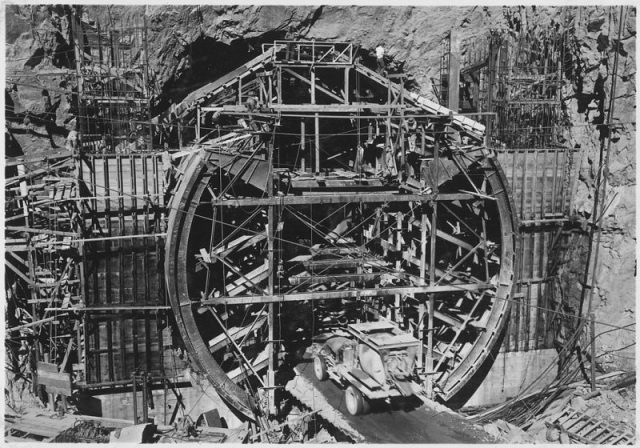 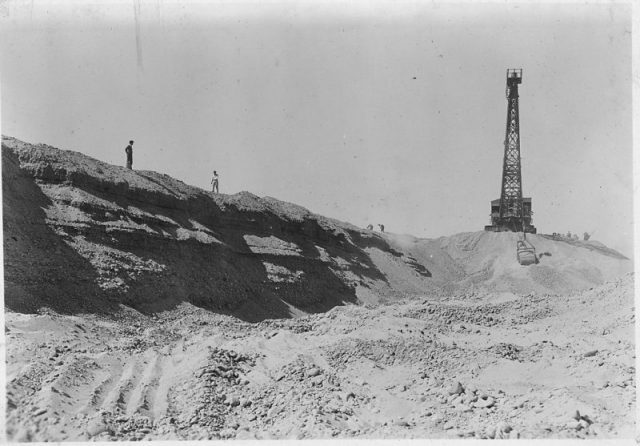 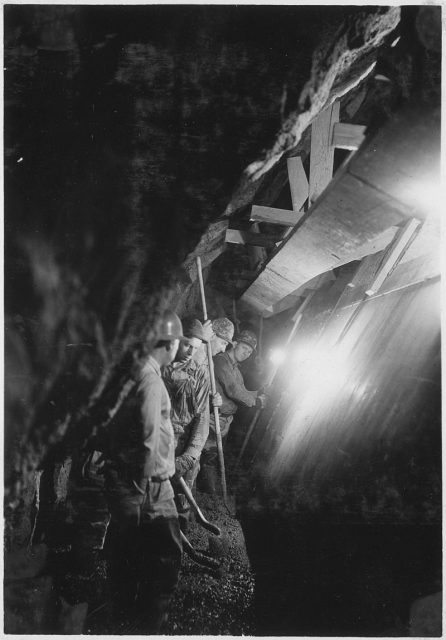 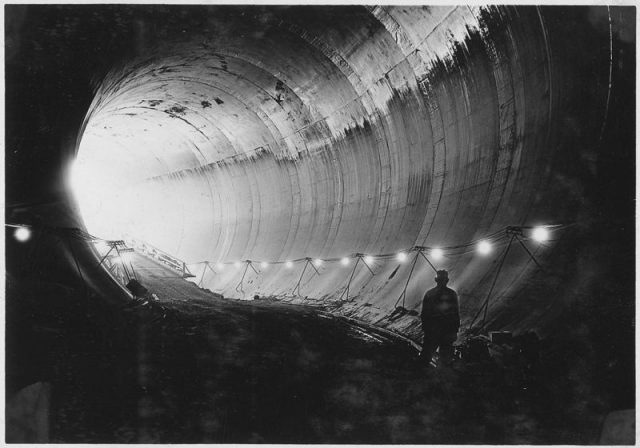 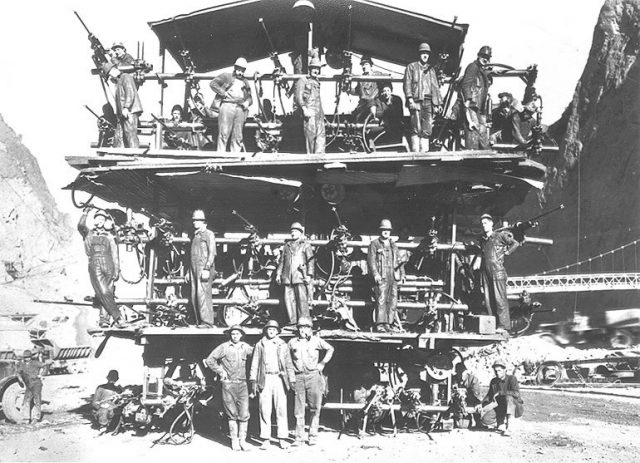 This piece of equipment, named a Jumbo Rig, was designed to speed up the Hoover Dam’s tunnel drilling process. Built on the back of a 10-ton truck, 24 to 30 drills could be operated at once. 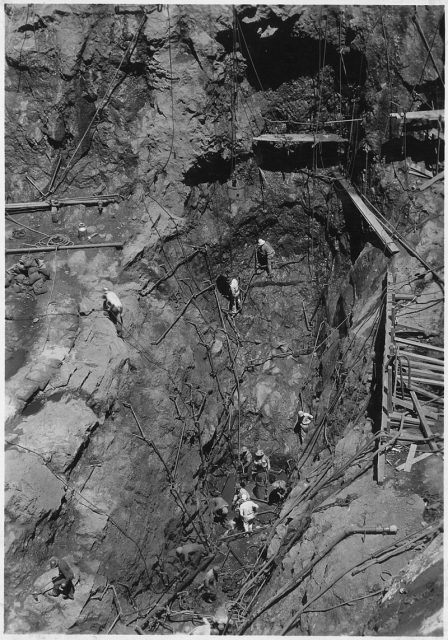 Trench at upstream toe of Boulder Dam foundation, looking toward Nevada side from top. 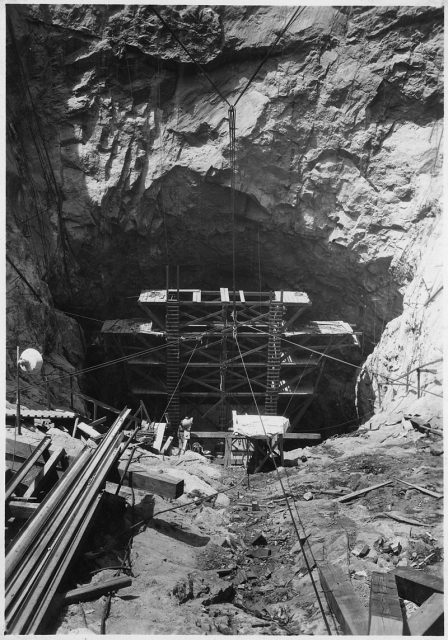 Trimming jumbo being lowered into inclined spillway tunnel on Nevada side.

On May 12, 1933, demolition crews detonated four tons of dynamite to prepare the canyon for early construction.

The project was so strenuous and dangerous, approximately 112 men died during its construction. Some died by drowning, others by falling and a few men even committed suicide on the job site.

The dam got its name when Ray L. Wilbur (Secretary of the Interior) named it after President Herbert Hoover at the spike driving ceremony for a nearby railroad project. President Franklin D. Roosevelt dedicated the Hoover Dam on September 30, 1935.

Though the name had been changed to “Boulder Dam,” in 1933 by Harold Ickes, it regained its original name 14 years later. Today, the Hoover Dam stands as one of the wonders of the modern world and supplies power to nearly one-and-a-half million Americans every year.