In the Iliad, the epic Greek poem written by Homer sometime from 750 to 700 BC, the southern Greek city of Pylos is introduced to us as the home of the Mycenaean king Nestor. He built a sumptuous palace about 1300 BC which has been under excavation since about 1912.

Not far from the remains of the palace, the undamaged tomb of a Greek warrior was discovered in 2015 by Sharon Stocker and Jack Davis from the University of Cincinnati.

Among the finds from the tomb is a Minoan agate, only one and one half inches long, with an extremely intricate carving of a warrior attacking an enemy and a vanquished enemy lying at his feet. It is believed to have been made around 1450 BC. The carving is so tiny that some parts of it can only be seen with a magnifying glass. 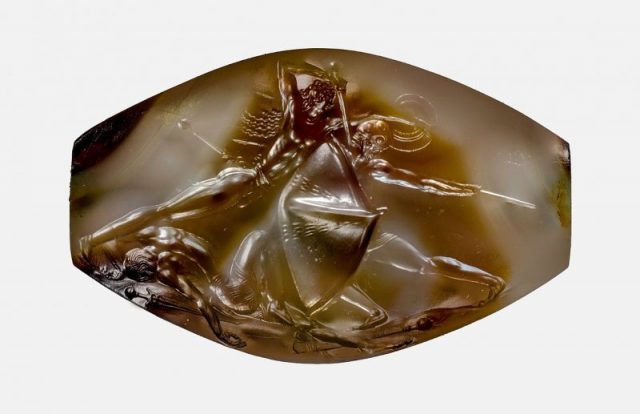 The Pylos Combat Agate, an ancient object found in Pylos, Greece and created around 1450 BCE.

According to Davis, as relayed by National Geographic, “The representation of the human body is at a level of detail and musculature that one doesn’t find again until the Classical period of Greek art 1,000 years later.”

Considered the most important archaeological find in over fifty years, the Pylos Combat Agate has altered the known history of ancient art. 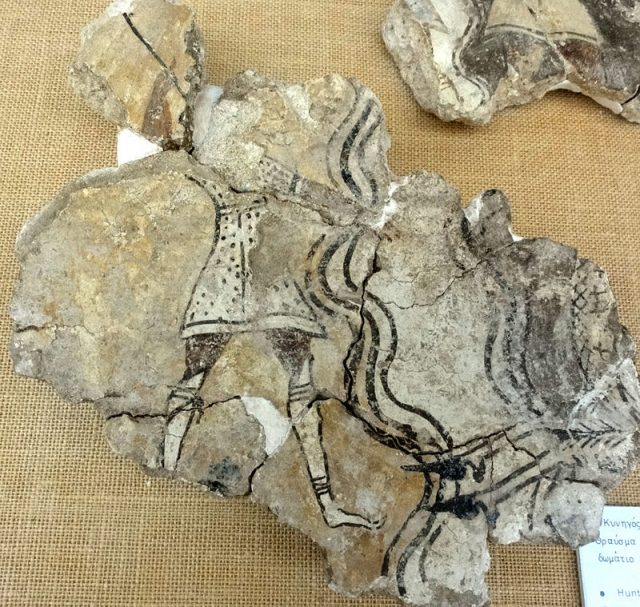 Fragment of wall fresco showing a hunter and stag at the Palace of Nestor. This fragment was part of the upper floor having fallen into room 43. On display at the Chora museum. Photo by Fæ CC BY-SA 3.0

It is unknown how the hard stone was carved with such detail when as far as we know there were no magnification tools available at the time.

When it was originally found lying next to the right arm of the skeleton of the warrior, the stone was crusted with lime and no one knew what a valuable object it was. After careful cleaning that took about a year, the beauty of the image was finally revealed. 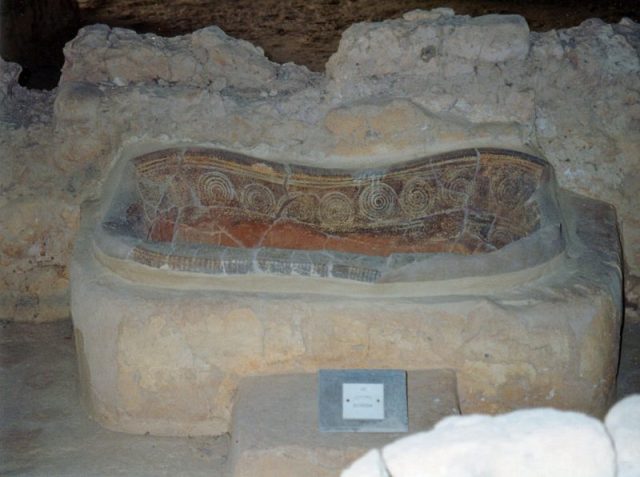 The deceased, about thirty-five years old and buried somewhere around 1450 to 1500 BC, is referred to as the “Griffin Warrior” because of an ivory plaque carved with griffins that was also found in his tomb.

The riches found buried with the warrior indicate he was a wealthy man, possibly a ruler. Over three thousand objects were buried with him.

No earthen pots or vessels were found in the grave, only silver, gold and bronze. Cups made from gold were strewn across the body and a bronze sword, about three and a half feet long with an ivory hilt decorated with gold, was found on the left side of the skeleton, alongside a dagger also adorned in gold. 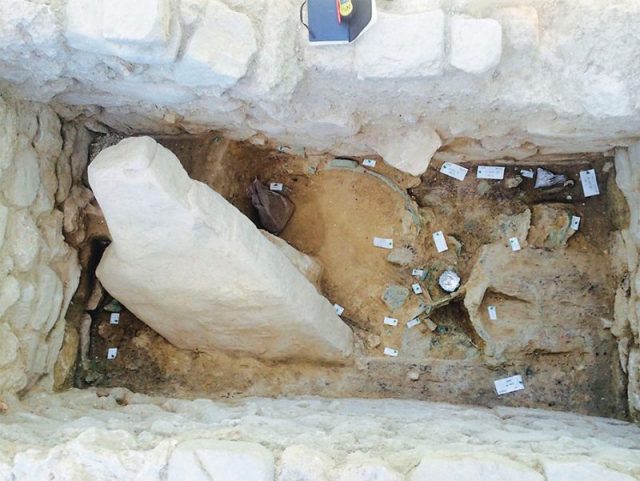 More weapons were found near the warrior’s feet, as well as four carved gold signet rings, hundreds of beads made from gold, amber, jasper, amethyst and carnelian, a gold chain, more seal stones less intricate as the Pylos Combat Agate, a bronze mirror with an ivory handle, six ivory combs, and perforated boars teeth thought to be from the warrior’s helmet. 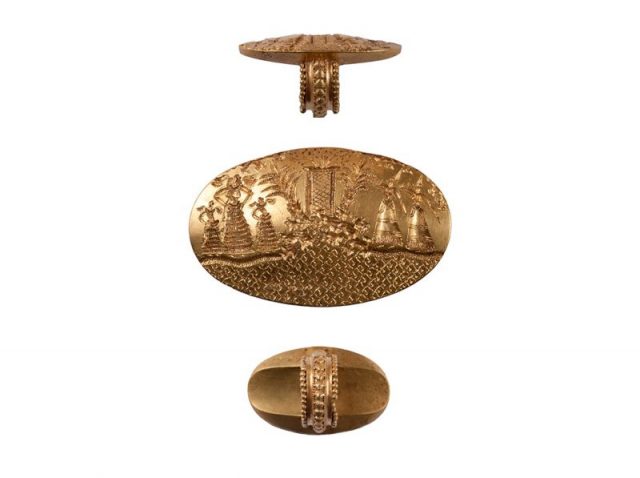 Ring discovered in the tomb Photo by University of Cincinnati

The finds indicate a previously unknown association between Mycenaeans from the Greek mainland and Minoans who inhabited the island of Crete. It is possible that the Minoan items were the spoils of war, but could indicate trade between the two groups before the Minoans were conquered.

The artifacts are being stored at several museums including the Museum of Ancient Pylos in Chora, Greece, and the University of Cincinnati.

The area of Pylos is still being excavated by the team and artifacts from the Griffin Warrior’s tomb are still being cleaned and examined. Earlier excavations produced clay tablets with Greek script detailing the Greek civilization circa 1200 BC.

Read another story from us: Europe’s Oldest Book Was Found in the Tomb of a Saint

These gave rise to many questions about the once stately palace, that led Stocker and Davis to become interested in the archaeology of the area. The garbage pits, an early Mycenaean fortification wall, and foundations of houses are also being studied.