Archaeologists who were excavating an ancient Roman site have discovered the body of a 10-year-old child who may have died of malaria and appears to have been given a so-called “vampire burial” in the hopes that he would not rise from the grave and infect the living.

The child was buried with a rock intentionally inserted into his mouth at his death, about 1,550 years ago.

“I’ve never seen anything like it. It’s extremely eerie and weird,” said David Soren, a University of Arizona archaeologist.

In northern Italy, where the child’s grave was found, they are calling it the “Vampire of Lugnano.” 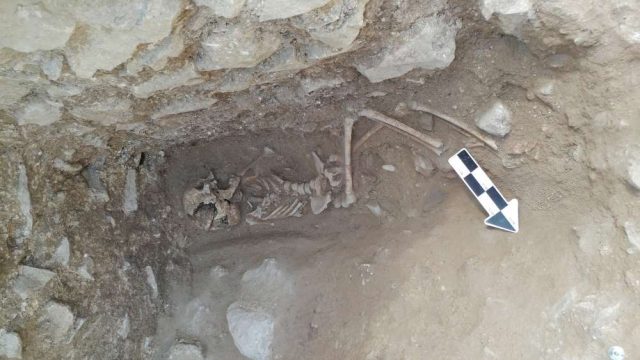 The remains are the latest unusual discovery to emerge from the Cemetery of Children, a site containing dozens of children’s bodies and evidence of witchcraft including toad bones, raven talons, and bronze cauldrons, according to a paper released on October 12, 2018. The bronze cauldrons were filled with the remains of sacrificed puppies.

“Given the age of this child and its unique deposition, with the stone placed within his or her mouth, it represents, at the moment, an anomaly within an already abnormal cemetery,” said David Pickel, a doctoral student at Stanford who is the excavation director, in an interview with Fox News.

He added, “This just further highlights how unique the infant — or now, rather, child — cemetery at Lugnano is.” 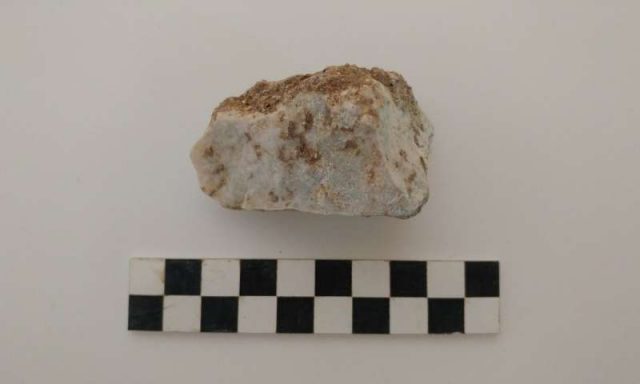 The rock inserted into the child’s mouth. David Pickel/Stanford University

“There are still sections of the cemetery that we haven’t excavated yet, so we don’t know if we’ll find other older kids,” bioarcheologist Jordan Wilson, a doctoral student in anthropology at the University of Arizona who analyzed the bones in Italy, said in the statement.

The cemetery was erected during the 5th century AD, within a Roman villa. During that time, a deadly malaria outbreak hit the area, the archaeologists said. 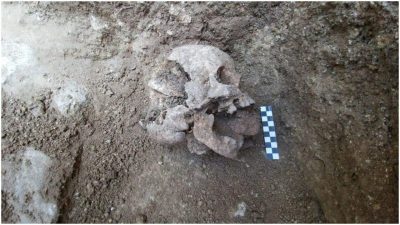 “We know that the Romans were very much concerned with this [the spread of disease] and would even go to the extent of employing witchcraft to keep the evil — whatever is contaminating the body — from coming out,” Soren said, adding that the “evil” may have been malaria.

Until now, archaeologists believed the cemetery was designated for infants, toddlers, and unborn fetuses. In some previous excavations of more than 50 burials, a 3-year-old girl was the oldest child found. 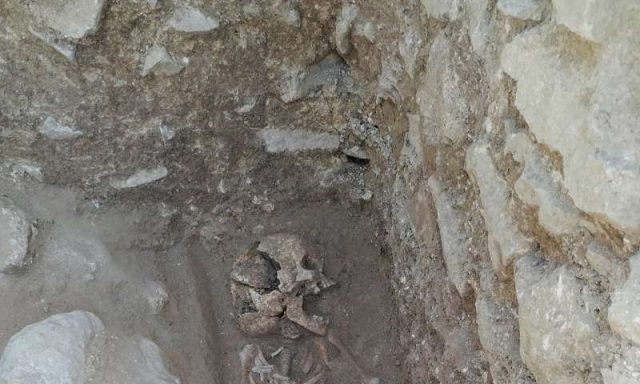 The discovery of the 10-year-old suggests that the cemetery may have been used for older children as well, said bioarcheologist Jordan Wilson, a UA doctoral student in anthropology who analyzed the remains in Italy.

“There are still sections of the cemetery that we haven’t excavated yet, so we don’t know if we’ll find other older kids,” Wilson said.

This discovery underscores the fact that people have feared vampires for a very long time.

“Pretty much every culture on Earth has some version of a vampire (or proto-vampire) myth. Chinese folklore has the Jiang shi, which are reanimated corpses that rise from the grave to prey on the living; one type has sharp fangs, the better to bite into the neck of said prey,” according to Ars Technica. “Russian, Albanian, Indian, and Greek folklore have similar undead monsters. Russian villagers in the Middle Ages often drove stakes into the bodies of suspected vampires upon burial to keep them from rising again.”

In Northern Italy, the open position of the child’s jaw, which would not have opened naturally during decomposition with the body positioned on its side, suggests that the rock was intentionally inserted in the mouth after death, Wilson said in an interview with the University of Arizona News.

Teeth marks on the surface of the stone provide further evidence that it was placed purposefully.

Similar burials have been recorded in other places, such as Venice, where an elderly 16th century woman dubbed the “Vampire of Venice” was found with a brick in her mouth in 2009.

In England, in 2017, an adult from the 3rd century was found buried face down with his tongue removed and replaced with a stone.