Among the most unusual forests in the world, there is one in Russia called the Dancing Forest as well as one in Poland called the Crooked Forest. They appear somewhat similar, containing an array of pine trees marked for their strange growth, and many similar legends and theories have arisen to explain this remarkable occurrence.

They are twisted and swirling, forming curls and spirals — an extraordinary sight. 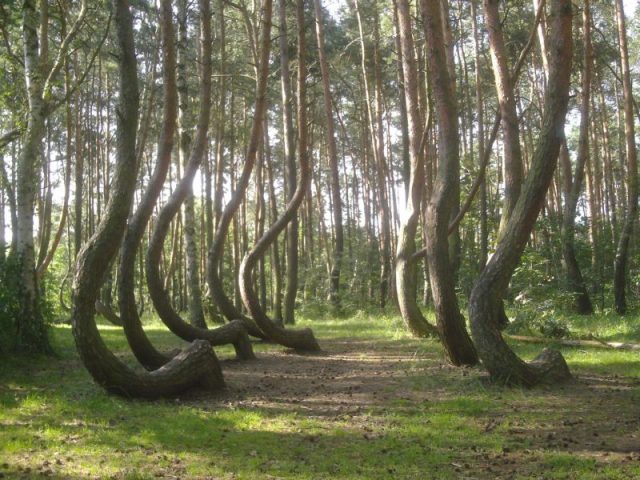 Poland’s Crooked Forest, near the town of Gryfino in West Pomerania has  around 100 swirly pine trees planted sometime around 1930 (when the territory was still part of Germany). 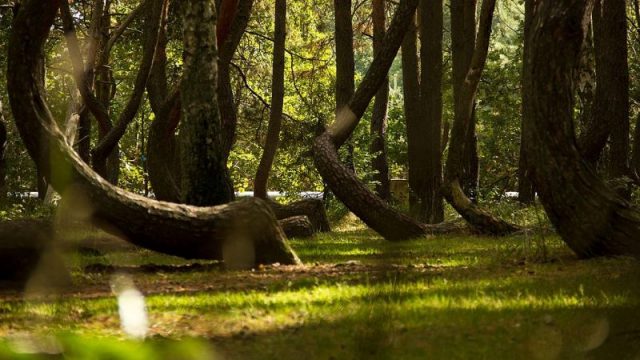 Many people believe that some kind of tool or technique was used to purposefully make the trees grow this way, but these remain theories and the specific methods are not known. It has also been surmised that the trees may have been artificially deformed to create naturally curved wood for articles of furniture or boat building. Others think it may been a particularly vicious snowstorm which shaped the trees this way, but again, only theories exist. 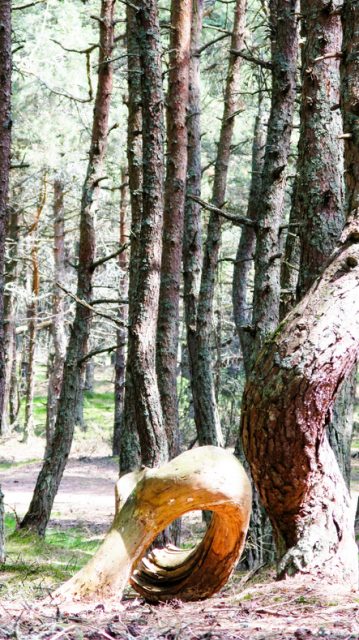 As well in the Dancing Forest of Russia, the reasons why the trees have grown this way are unknown. It’s unlikely they were watered with vodka, but among locals, this forest is also known as the Drunken Forest.

The Dancing Forest or the Drunken Forest, as you please, can be found on the Curonian Spit — a narrow sand-dune spit that separates the Curonian Lagoon from the Baltic Sea. 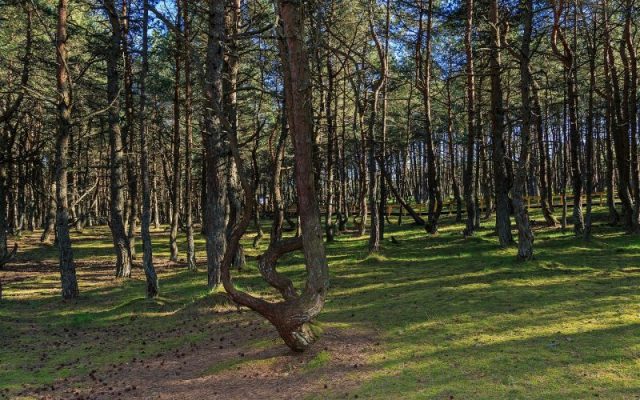 The sandspit straddles the border between Kaliningrad Oblast, a Russian exclave overlooking the Baltic Sea, and Lithuania. 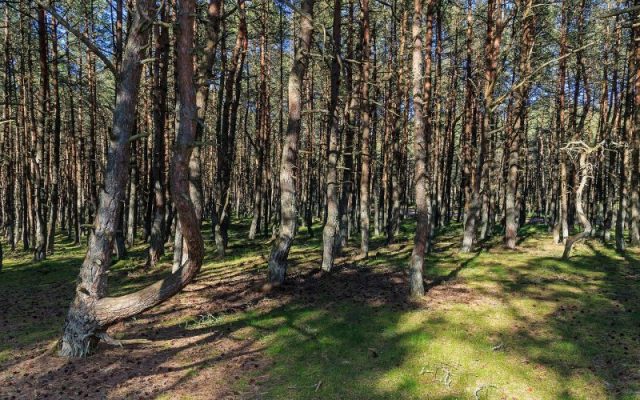 People planted the pines in the 1960s to help maintain the stability of the sand dunes.

It is precisely this wobbly terrain that is considered as one possible reason for their crooked and deformed growth. 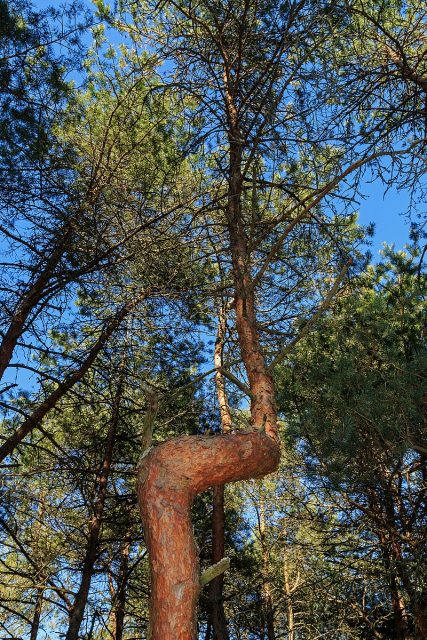 Pine trees on the Curonian Spit in Kaliningrad Oblast.

Several other theories have been put forward to explain the strange growth of the pine trees. 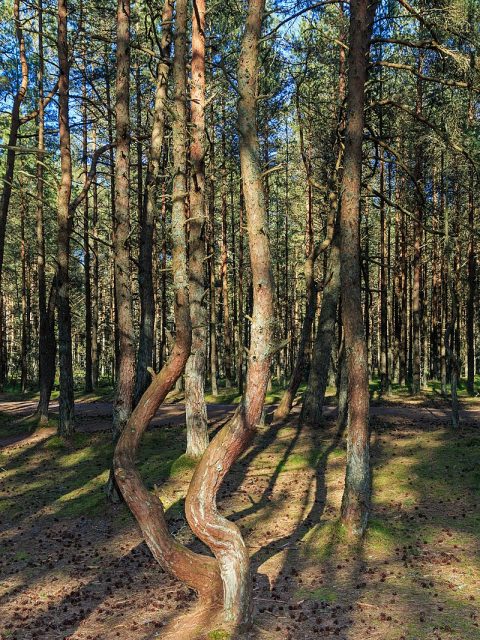 Among the more accepted scientific ones is that an infection of the pine shoot moth — a pine plantation pest whose larvae burrow into and feed on developing buds — when the trees were very young could be the culprit. 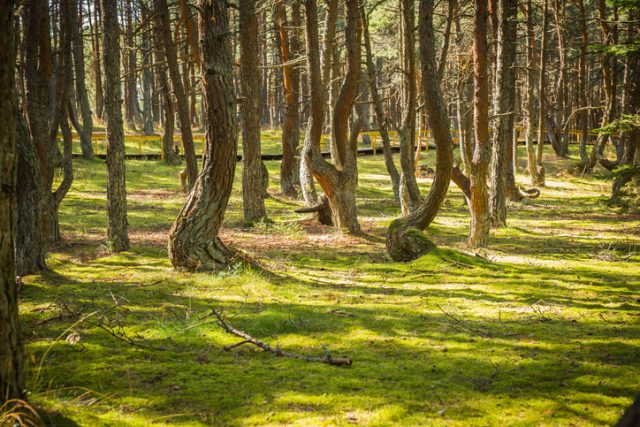 Image of dancing forest at Curonian spit in Kaliningrad region of Russia.

While that may have caused the trees to initially have atypical growth, the pines as any other plant continued growing upwards, chasing the sunbeams.

Their growth was improved in the process, but the early anomalies remained, giving the distorted tree forms. 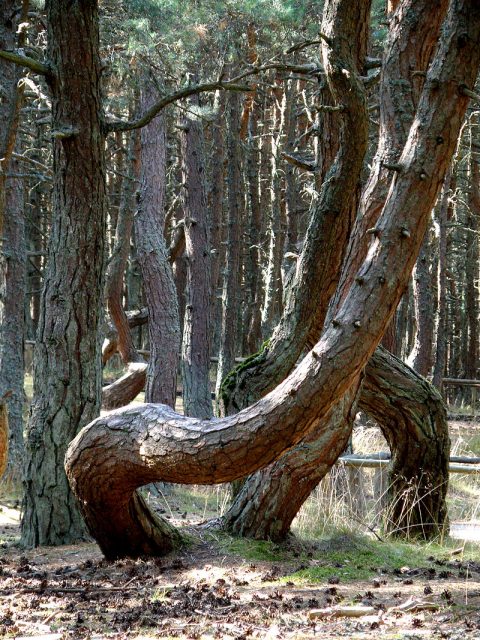 Alternative theories point the finger to forceful winds, or perhaps humans who somehow did this to the pines on purpose.

These strange trees have not failed to capture the imagination of local folks. 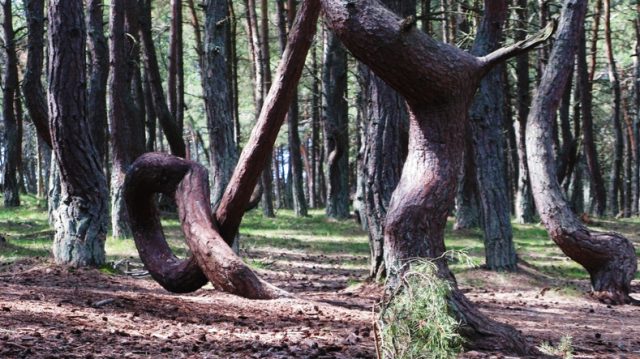 One legend relates to a Prussian prince who one day was wandering in the forest when he heard an irresistible melody.

The heart-warming music was coming from a beautiful young girl who was playing the lyre, seated in a forest clearing. 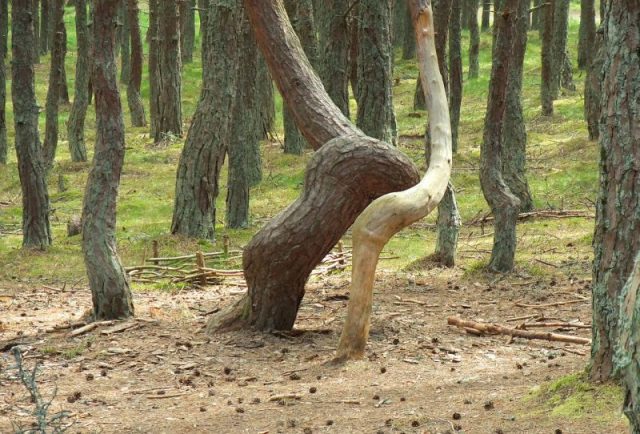 The prince fell in love at first sight. He immediately proposed to the mysterious girl but she told him she can only marry someone who shares her Christian faith.

The prince was willing to convert and become Christian but asked the girl to first demonstrate the prowess of her God, which is what the girl went on to do. 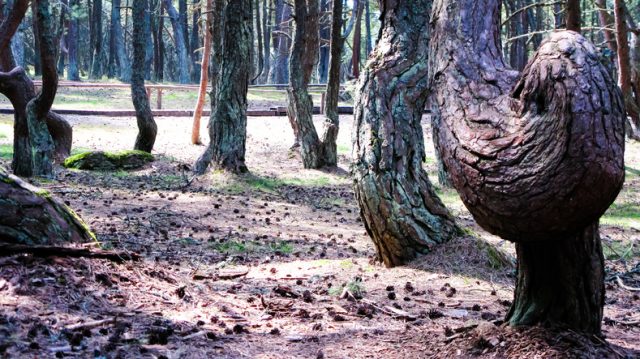 As she resumed playing the lyre again, the entire forest fell silent and the trees around them began dancing. The prince was persuaded and their story ends with a happy union.

There are also some less joyful superstitious explanations of how the strange tree growth happened. 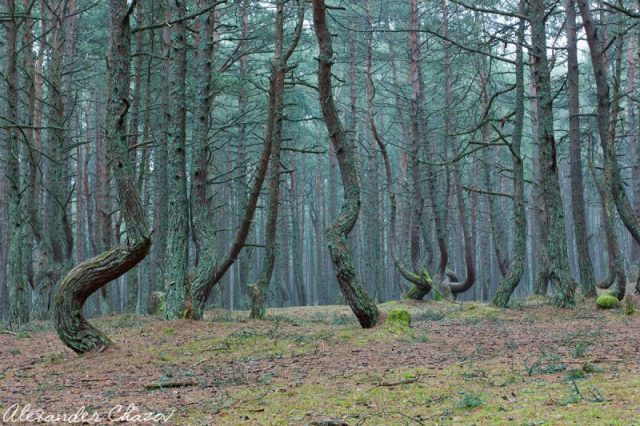 Some people believe that the forest is a place of confrontation between good and evil forces, and their energies are responsible for the contorted pines.

The existence of so many explanations hints at how special this place is. 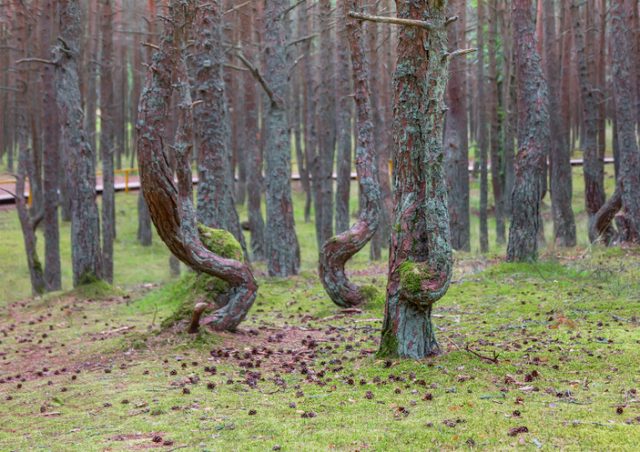 Unsurprisingly the Dancing Forest is part of a protected area. In 2000, the entire Curonian Spit, covering almost 61 miles, has been proclaimed a Unesco World Heritage Site and there is more to its curiosities than its strange forest.

The region is part of an ancient migration route for birds. Each year millions of birds pass through the area on their way to reach Asia. In 1901, the world’s first ornithologist station was founded here and is still carrying out research on our feathered friends.

Besides birds, abundant wildlife keeps company with the strange crooked pines. There is moose, wild boar, and foxes among other forest creatures, each one of them adding their own bit of magic to the place.