Painter Bob Ross is known as the king of happy little trees. He was known as much for his soft-spoken personality and fondness for small, furry animals as he was for his show, The Joy of Painting.

Another integral part of his image and brand was his iconic hair. The funny thing about the latter, however, is that “Mr. Natural’s” halo of fluff isn’t… well… natural. His natural hair was, in fact, straight.

According to Mental Floss, his famous “do” wasn’t even really a matter of choice, and it was not something his show’s producers required.

Instead, it came about as a result of two very important things for the self-employed: personal branding and cutting costs. 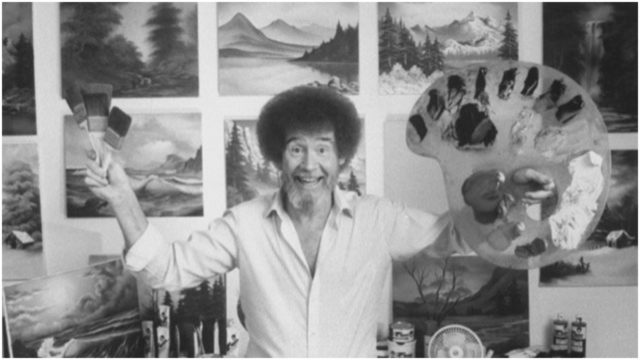 In the early ‘80s, Ross was embarking on his career as a painter and teacher. The man who mentored him, Bill Alexander, was ready to retire, and asked Ross to take over a workshop tour teaching painting techniques. Ross agreed to do it, told his wife he’d try it for a year, and set out on the circuit, living and traveling in a motorhome.

Hitting the road is neither easy nor cheap, especially when you are just starting out. As one way of saving money while he was traveling, Ross opted to get his hair permed, thus lowering the amount of maintenance he needed to do. 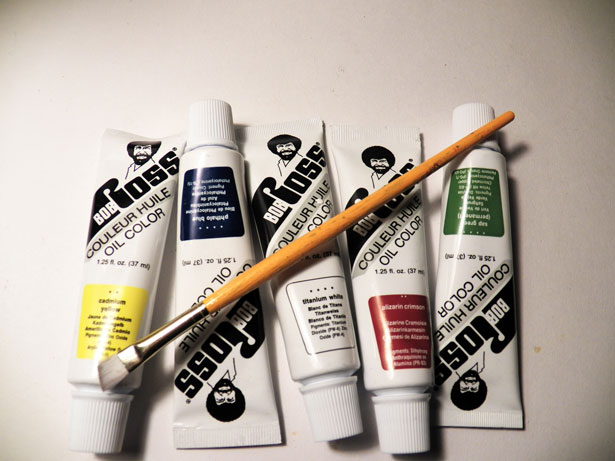 At the same time, he was launching his own line of brushes and paints. The packaging had Ross’s picture on it, in all his fluffy glory. Given the logo, Ross couldn’t cut his hair, or it would undermine the branding he was working hard to establish.

He may not have particularly liked his permed curls, but he understood that it was becoming an integral part of his brand. As a result, he kept his bushy look for the rest of his life. 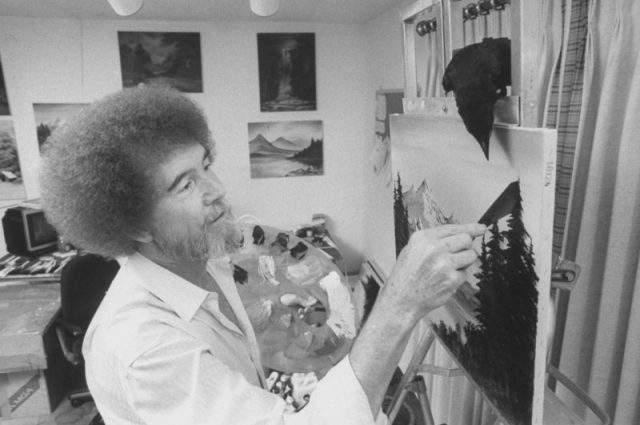 TV painting instructor/artist Bob Ross painting one of his landscapes in his home studio as his pet crow watches closely from its perch on top of the easel. Photo by Acey Harper/The LIFE Images Collection/Getty Images

Ross’s business partner, Annette Kowalski, talked with NPR about Ross’ early days. Kowalski went into a deep depression after the loss of a son. She said that all she could manage was to lie on her sofa and watch TV.

One of the shows she favored was a painting show on PBS with Bill Alexander. Her husband was very concerned about her state, and wanted to get her out of the house, so he signed her up for one of Alexander’s painting classes, which was being held in Clearwater, Florida, 900 miles from the couple’s home.

Alexander had turned his classes over to Ross by then, however, and, although Kowalski was very disappointed not to be able to paint with the man she saw on television, she quickly knew that Ross was special. 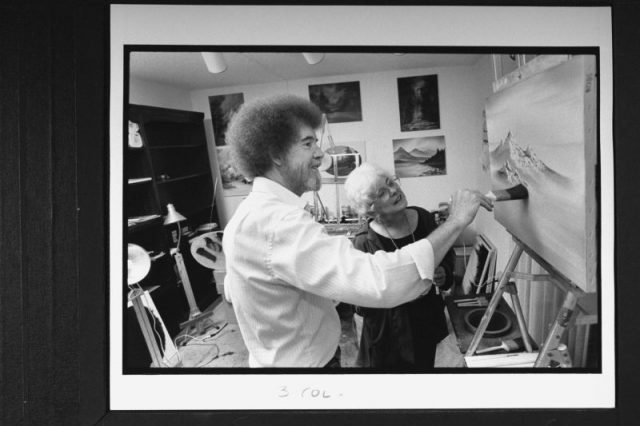 TV painting instructor/artist Bob Ross at easel painting one of his mountain landscapes as his business partner Annette Kowalski looks on.

“I was so mesmerized by Bob. Somehow he lifted me up out of that depression. I just think that Bob knew how to woo people. I said, ‘let’s put it in a bottle and sell It.’” Kowalski said.

She approached Ross, and ended up becoming his business manager. They hit the road, holding seminars around the country which at the time weren’t very popular. When ads in local papers weren’t generating the crowds they were hoping for, Kowalski got the idea of creating a Bob Ross hotline to help create some interest.

Eventually, they made a television commercial and started The Joy of Painting, and it was through the show that Ross finally began to develop a real following. Most of his viewers weren’t watching to paint along with him, though. They were just watching him do his thing. 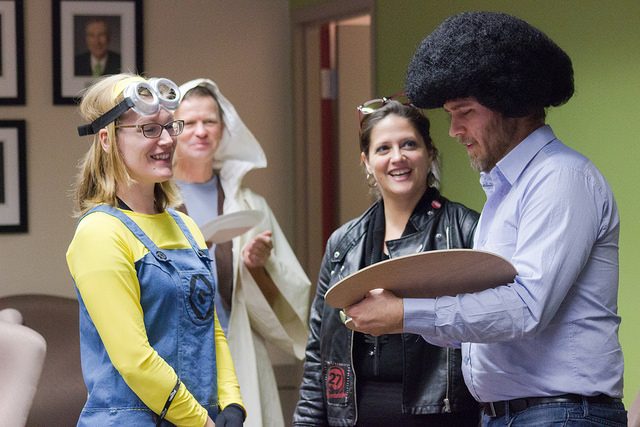 Bob Ross cosplay. Photo by University of the Fraser Valley CC BY 2.0

Ross hypnotized viewers with his manner of speaking and his gift for producing complete landscapes in 30 minutes. He made it look easy enough that those watching him felt like they could do it, too. While he worked, he would talk about how there were no mistakes in painting, just “happy little accidents,” and would talk about adding “happy little trees” or “happy little streams.”

When he would add a second example of whatever element he had just created, he would talk about how everybody needs a friend. His style was warm and comforting, and people responded.

Kowalski said that he was a very different personality when he was off-screen, though, referring to him as rather authoritative.

“Do you really think this company would be as successful as it is if he didn’t insist that everything be done a certain way?” she asked. She went on to say, “I don’t want to leave the impression that he was rude or nasty. He just wanted things done his way. He was wonderful. He was really wonderful. I want Bob back.”

Read another story from us: 5 Creative Couples Who Took the Art World by Storm

Ross died on July 4, 1995, from lymphoma. He was 52 years old. The business, now run by Kowalski, continues selling art supplies, and episodes of his show are streamed through services like Netflix, as well as frequently still being aired on PBS stations around the country.