For a short time in the late 1970s, John Simon Ritchie was one of the biggest rock stars in the world.

For some time after his death, his image became the symbol of a nihilistic generation and movement spanned two continents.

Sid Vicious was arrested for murdering his girlfriend, Nancy Spungen, in the fall of 1978. He was released on bail shortly thereafter, and in February 1979, shortly after making bail on an assault charge he picked up after his first stint, he threw a party, overdosed on heroin and died, being found the next morning by his mother.

It seemed to many a fitting end to an icon of a movement that had embraced the slogan, “Live fast and die young.”

For years after his death, Sid’s image appeared on t-shirts, posters, and pins worn all over the leather jackets of the punks that idolized him. The story of his involvement with the Sex Pistols and Nancy even launched the Hollywood career of Oscar winner Gary Oldman. 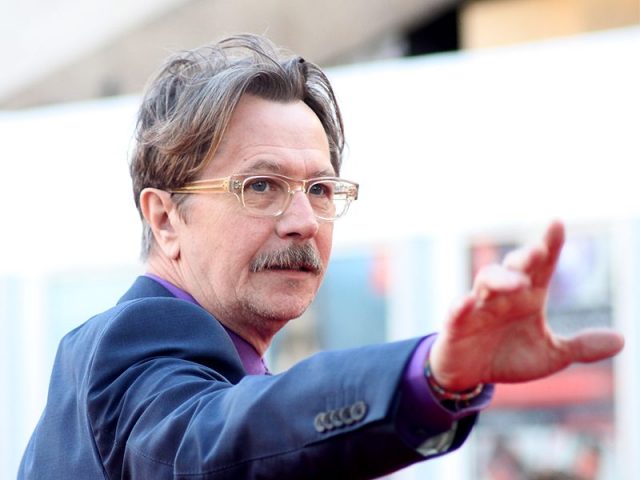 How and why did John Simon Ritchie rise so high and fall so low? In the last few years, John Lydon, known in the punk rock days as “Johnny Rotten,” has expressed regret for bringing Sid into his band, the Sex Pistols, telling an audience in 2014 that “He (Sid) didn’t stand a chance. His mother was a heroin addict. I feel bad that I brought him into the band, he couldn’t cope at all. I feel a bit responsible for his death.”

By all accounts, Sid, when not completely wasted, was a funny, sarcastic kid whose impressions made people laugh. He met John Lydon in 1973, where they were both students at a technical college. He and Lydon had a passion for music and avant-garde clothes. They both made their separate ways to London, where things were both miserable, and changing. 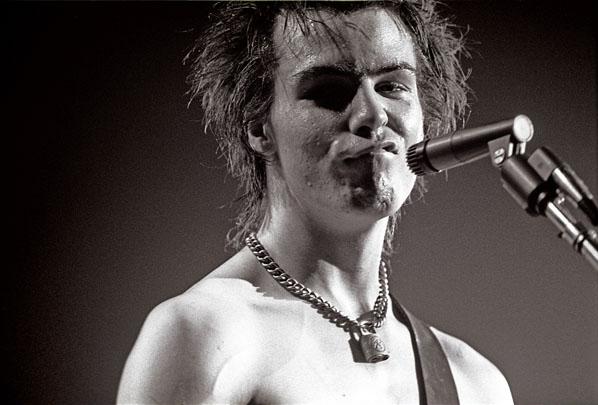 Sid Vicious from the Sex Pistols – Winterland – January 14, 1978 – this was the final show of the original Sex Pistols first and only US tour and the last time that Sid was on stage. Photo by Chicago Art Department CC BY 2.0

London in the 1970s was a depressing place to be young. Grungy, with a poor economy and a poor outlook for the immediate future, Londoners got used to strikes, unemployment and living on the “Dole.”

The only thing that kept kids like Lydon and Ritchie going was their music. The rest – television, radio, music, was all mainstream, made by and for people who could never understand what life in the underbelly was like. 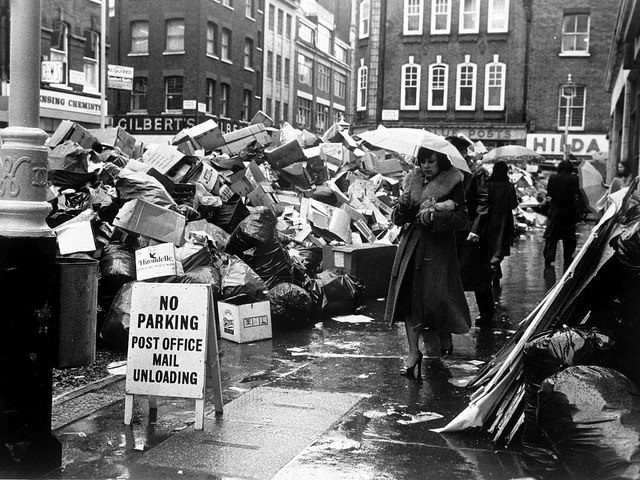 That life spawned “punk rock.” Music fans and aficionados will argue the point to death: “Who started punk rock, and where? Some argue New York and the Ramones, or back even further with Lou Reed, and others say London.

In the long run, does it matter? Punk rock in both places, the USA and the UK, was a product of its times: unemployment, riots, drug use, the threat of WWIII, run-down infrastructure, little hope and politicians who didn’t seem to care.

More than anything else, punk rock was an expression of anger and frustration. For people like Sid, whose mother was a heroin addict and whose father abandoned his family. When his mother remarried, it wasn’t long before his new stepfather died.

It was not a good life for a kid. By the time he was in his teens, Sid was drinking hard and getting into trouble, frequently getting into fights and threatening people with chains or broken bottles. 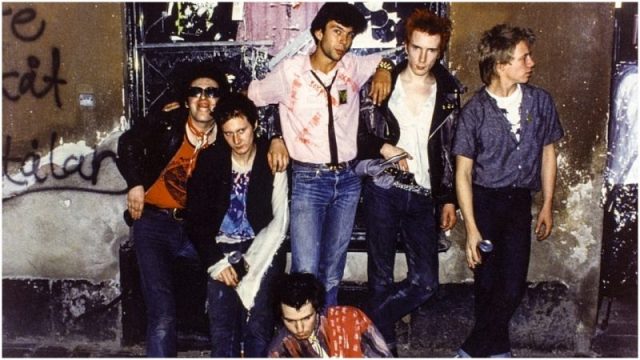 As the punk scene grew in London, Sid was there. He was supposed to play drums for the soon to be iconic “Siouxsie and the Banshees” and was considered for the lead singer of another important early punk group, “The Damned.”

Problem was, Sid really didn’t have that much talent, and he spent a lot of time messed up. Eventually playing a gig on drums with Siouxsie, he attacked new Damned lead singer Dave Vanian with a broken beer glass, but missed and blinded a female spectator in one eye.

Sid spent some time in prison for the incident, and sometime after his release, he was asked to join Lydon’s now incredibly famous (infamous?) band, the Sex Pistols, after their bass player Glen Matlock left the band.

Many people thought it was a mistake. Sid had always been a hardcore Pistols fan and could be found at most of their shows – for a time he lived with Lydon, but he had virtually no real musical talent. Some said that didn’t matter – punk wasn’t about the music, it was about the attitude.

The Pistols’ first album, “Never Mind the Bollocks, Here’s the Sex Pistols!” sold millions of copies and though the band was never going to be as musically gifted as the Beatles, they did take rehearsals and gigs seriously. 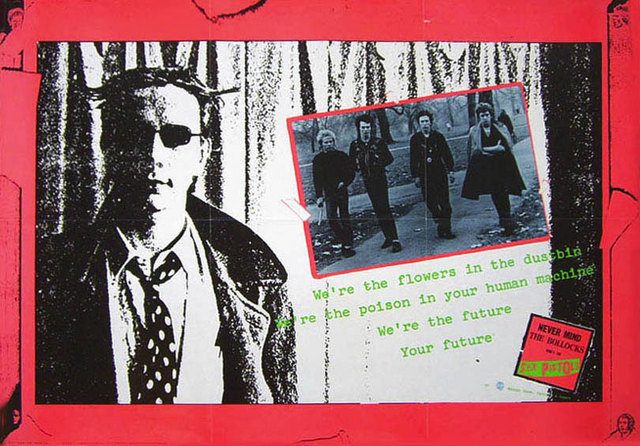 US poster for Never Mind the Bollocks, Here’s the Sex Pistols.

Sid was given guitar lessons by Lenny Killmeister of Motorhead but was never able to quite get it. He actually only appeared on two songs on the record, Matlock having quit during production.

Johnny Rotten was loyal to his friend, but the other two members of the band, Paul Cook and Steve Jones, had little patience with Sid. Still, the bands’ promoter, Malcolm McLaren, whose boutique Sid and Johnny had used as a hang out in earlier years, thought Sid’s image was enough to make millions.

By the time the band got to the United States for their only tour of the country, the entire band was fed up with Sid’s behavior. Though they never sought to please or be anyone but themselves in interviews, the Pistols were usually coherent, but Sid had gotten hooked on heroin and his drinking had progressed.

At 20 years old, the money, fame, recognition was too much for Sid – he walked through a glass hotel room door, passed out at practice, and went the extra mile to antagonize the crowds of people who showed up to see the Pistols – many in the crowd waiting for a chance to hate them, and Sid gave them plenty of reason to.

Fights and near riots followed the band on their North American tour in 1978, and the last Sex Pistols gig took place in San Francisco, with Lydon’s famous lines “Ever get the feeling you’ve been cheated?” He later said “I felt cheated, and I wasn’t going on with it any longer; it was a ridiculous farce. Sid was completely out of his brains—just a waste of space. The whole thing was a joke at that point.

By this point, the entire band, including Johnny Rotten, were tired of Sid’s antics and tired of each other. The Sex Pistols broke up, and Sid stayed in the USA. Through all of this, Sid was accompanied by his American girlfriend, Nancy Spungen, who according to many, was an incredibly annoying, spoiled Long Island princess with a serious drug habit – but she apparently loved Sid.

Trying to get the fame to last, Nancy, who had been involved in the punk scene in NYC and London and knew a lot of people with connections, got Sid a series of gigs. Some say she made good money on them, which Sid never saw.

Waking up on October 12, 1978, Sid rolled over and found that Nancy had bled out from a stab wound to the abdomen. Sid’s pocket knife was found at the scene and he was arrested for Nancy’s murder. According to Sid’s statement to the NYPD, he had no real recollection of the previous night — maybe they argued and she “fell” on the knife.

Just over three months later, Sid overdosed at his party, and though his friends tried to revive him, he never responded. They left, and his mother, who was visiting, found her son cold, ashen and dead the next morning.