The Macy’s Thanksgiving Day Parade is a long-running annual extravaganza, marking the start of the holiday season for viewers across the country.

They weren’t always a part of the parade. When R.H. Macy’s and Co. kicked off the holiday spectacle in 1924, it was a hodgepodge of floats pulled by horses, a couple of marching bands, live animals in cages (courtesy of the Central Park Zoo), Macy’s employees, and random New Yorkers who decided to join the then-six-mile march, from 145th Street in Harlem to Macy’s at Herald Square.

A puppeteer came up with the idea to use balloons 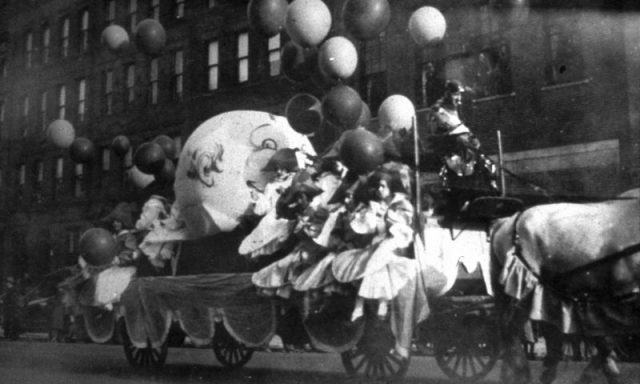 The hard-boiled New York City press wasn’t impressed, with one paper describing the event as “a retinue of clowns, freaks, animals and floats.”

To up the ante, artist and puppeteer Tony Sarg, the creative force behind the parade, wanted to feature something in the parade that everyone, even those spectators standing way back in the crowd, could see. The solution: balloons. Really, really big balloons.

The first balloons made their debut in 1927 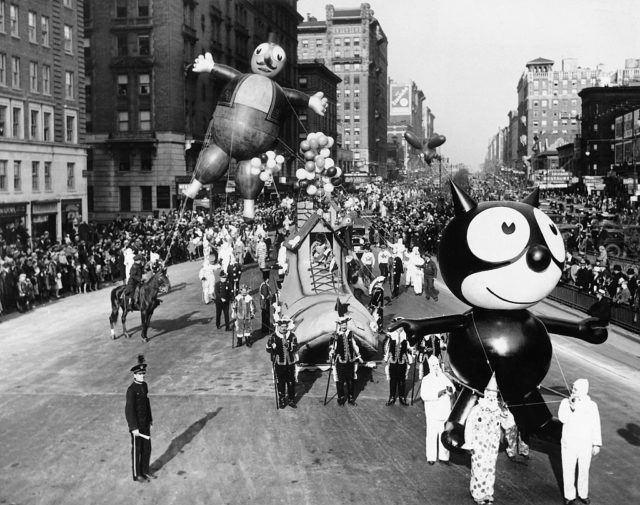 A Felix the Cat balloon and other parade floats and balloons are led down Broadway during the annual Macy’s Thanksgiving Day Parade. (Photo by George Rinhart/Corbis via Getty Images)

The Goodyear Tire and Rubber Company in Akron, Ohio, came on board, designing Felix the Cat, a toy soldier, and a dragon — all of which made their debut in 1927. Impressive, to be sure, though during the parade Felix would become tangled up in telephone wires and catch fire.

It was the first of several mishaps over the years. Among them, Popeye (1957), whose sailor hat filled with water during that rainy Thanksgiving Day, causing the balloon to veer off course and dump freezing cold water over spectators, and Kermit the Frog (1985), the first balloon to rip open and deflate over the crowd. 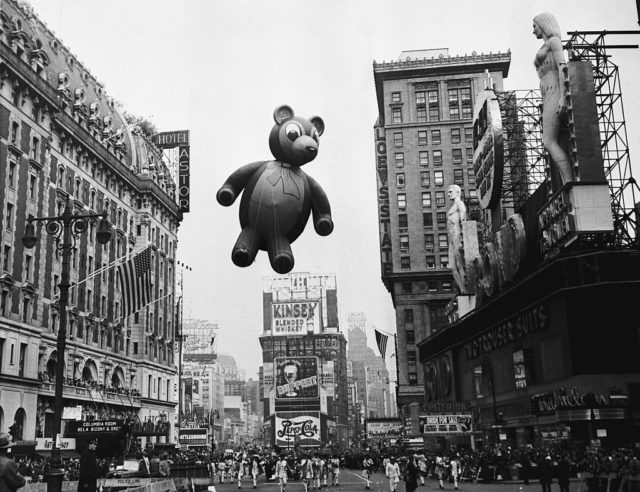 There was more than turkey with all the trimmings for New Yorkers today. Youngsters and oldsters got an extra treat from the gas bags, floats and bands in the annual Macy’s Thanksgiving Parade. This critter looked down on the crowd as the procession went through the Times Square area. (Photo Credit: Bettmann / Contributor / Getty Images)

But for sheer drama, nothing comes close to a 1932 incident, when the Macy’s spectacle was upstaged by a life-and-death struggle that took place shortly after the parade ended, in the skies above New York.

Back in the day, the balloons were released into the sky to float away. Macy’s officials — knowing the air space would be filled with planes — issued a stern warning to pilots who might be tempted to use the helium-filled characters for target practice, emphasizing that no reward would be given for, as they put it, “recovering” balloons.

Another cat balloon, Felix the Cat, and other parade floats and balloons are led down Broadway during the annual Macy’s Thanksgiving Day Parade. (Photo Credit: George Rinhart/Corbis via Getty Images)

That did not deter a plucky 22-year-old student pilot, Annette Gibson, of Brooklyn. At 4 pm on November 24th, a half-hour after the parade was over and the balloons released, Gibson and her flight instructor, Hugh Copeland, were flying at 5,000 feet above Queens. They spotted the 60-foot, yellow-striped Tom Cat directly in their path. Gibson, ready for some fun, wasn’t about to swerve, announcing, “I think I’ll have a piece of its neck.”

With that, Gibson proceeded to steer the plane straight into the enormous feline. Upon impact, the fabric of the balloon wound itself around the left wing of the aircraft, causing the plane to go into a fierce tailspin toward the ground. Gibson switched off the ignition to prevent the plane from catching fire, if and when it crashed.

As if things weren’t dire enough, the cabin door flew open, with Gibson almost falling out of the plane. (Miraculously, her foot caught in her safety strap and she managed to pull herself back in.) 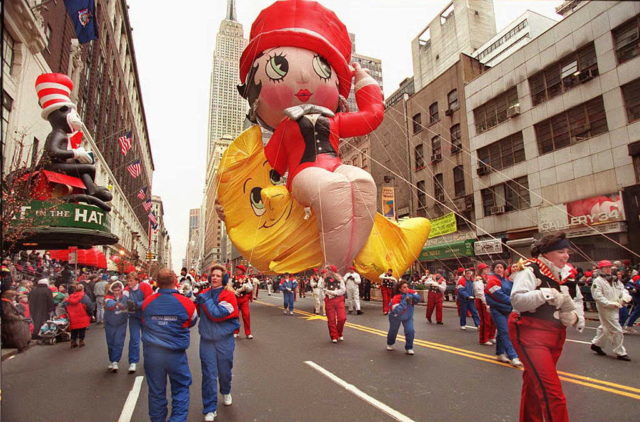 Handlers pull the Betty Boop balloon past Macy’s department store (L), with the Empire State building in the background, 23 November during the 69th annual Macy’s Thanksgiving Day Parade in New York. Some 2 million people are estimated to attend the traditional parade of balloons and marching bands. (Photo Credit: JON LEVY/AFP via Getty Images)

Thousands of people on the ground watched the unfolding events, mouths agape. As the plane continued to dive, the two pilots switched seats, and Copeland grabbed control of the plane. At just 250 feet above the rooftops in Rosedale, Queens, Copeland turned on the ignition and miraculously landed the plane at Floyd Bennett Field in Brooklyn.

The tattered remains of poor Tom Cat floated around the New York City area, souvenir hunters grabbing pieces of the balloon as they sprinkled downward.

As for the intrepid co-pilots, after an investigation by the Department of Commerce, Aeronautics Branch, both Gibson and Copeland were grounded for violating federal regulations forbidding “stunting” over busy areas. Gibson, however, did become front-page news. The New York Times headline read: “Fliers Hit Balloon, Plunge 5,000 Feet.”

More from us: How Eels Almost Became the Thanksgiving Main Dish

The following year, Macy’s put the kibosh on releasing balloons into the wild blue yonder.