The sheer quantity of food that some people can consume without apparent ill-effect is truly staggering, but there is one big eater in history who makes these men look like culinary lightweights. He was called Tarrare, and he could eat anything. And we do mean anything.

Tarrare (no one knows for sure if this was his real name or not, but it’s the only one we know) was born in 1772, near Lyon, France, according to the Daily Beagle. It’s said that he had an appetite that could never be sated.

When he was 17, he weighed roughly 100 pounds and could eat a quarter of a cow in one day. That would amount to nearly his own body weight in beef. Around that time, his family decided that they couldn’t afford to keep feeding him, and he was sent out to make his own way in the world. 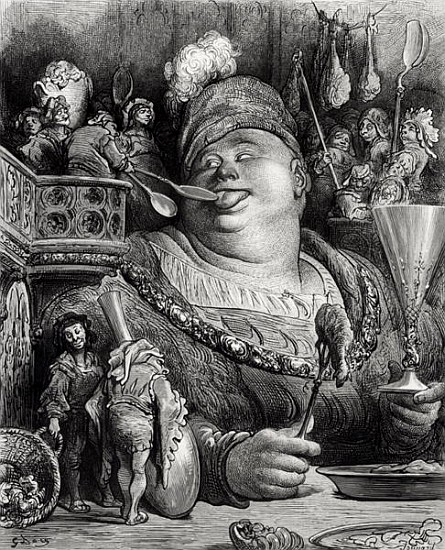 At a loss as to how to survive, Tarrare traveled for a while with a gang of thieves and prostitutes around the French countryside, begging for food when he could, and stealing it when he couldn’t.

He eventually encountered the French equivalent of a snake-oil salesman, who scooped him up and used his amazing capacity for eating as a way to draw crowds.

He would start by eating things like corks or stones, progress to eating entire baskets of apples, and his grand finale would involve eating live animals whole, without chewing them first. 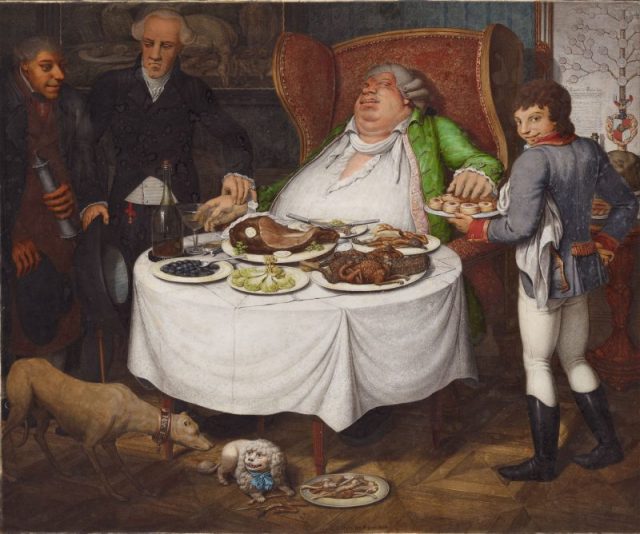 Once, in 1788, he developed an obstruction after doing his routine and the crowd took him to the local hospital, where heroic doses of laxatives were administered.

He recovered very quickly and reportedly offered to eat the physician’s pocket watch and chain by way of proof, although the doctor was unimpressed and didn’t take him up on the offer.

According to Mental Floss, Tarrare had a relatively normal appearance, except for an unusually large mouth with terribly stained teeth, and a stomach that hung so low, it was reported he could wrap it around his waist when it was empty.

He was perpetually perspiring, and, according to a report in the London Medical and Physical Journal, “he often stank to such a degree, that he could not be endured within the distance of 20 paces.” 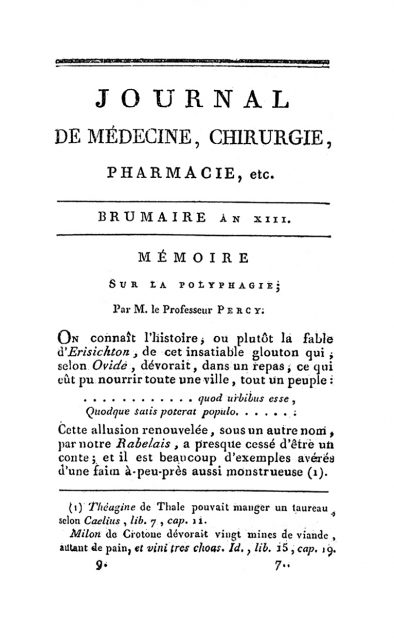 When the French revolutionary wars began, Tarrare joined the French army, where he was soon hospitalized after he couldn’t function on the rations he was provided and became “exhausted.”

At the hospital in Soulz he was put on quadruple rations, and, finding them inadequate to his appetite, he went on to eat all the poultices in the apothecary. Fascinated by what they were seeing, military medical personnel decided they wanted to do some experiments. 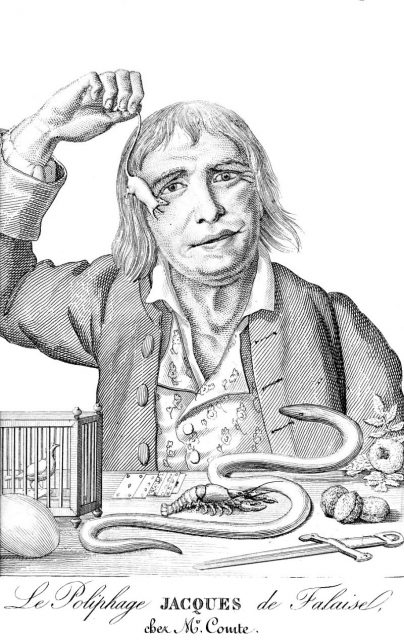 In the course of his time there he consumed a meal that had been made to feed 15 laborers, which included four gallons of milk. He also ate puppies, a live cat, lizards, and snakes, amazing the doctors.

He spent several months in the hospital, and when the army asked when Monsieur Tarrare might be able to return to service, the doctors were loath to give him up. One of them eventually came up with a bizarre plan to make use of Tarrare’s unusual abilities.

He would be made a courier who hides documents — he would carry the documents in his own body! To prepare for this exercise, Tarrare was first asked to swallow a wooden box with documents inside, as a test. 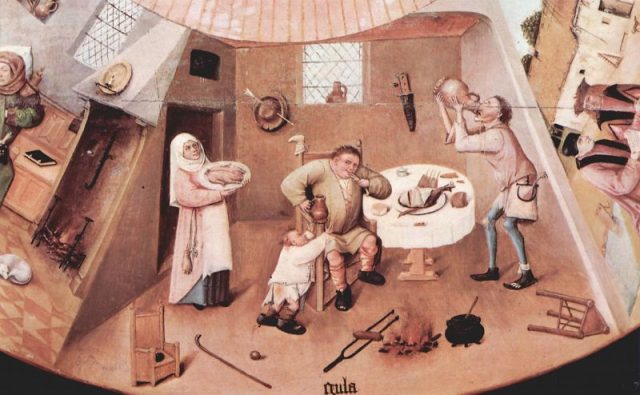 Gula – The Seven Deadly Sins and the Four Last Things, by Hieronymus Bosch.

When he returned from the hospital latrines a couple of days later with the box and its contents intact, he was asked to do it again at army headquarters. When he successfully replicated the act, he was made a spy. His first job was to carry a message to a colonel who was prisoner in a Prussian fortress.

His mind wasn’t as powerful as his stomach, however, and so he wasn’t told that he had a message of vital importance, but it was merely a request for the colonel to send back any information he might overhear about Prussian troop movements. 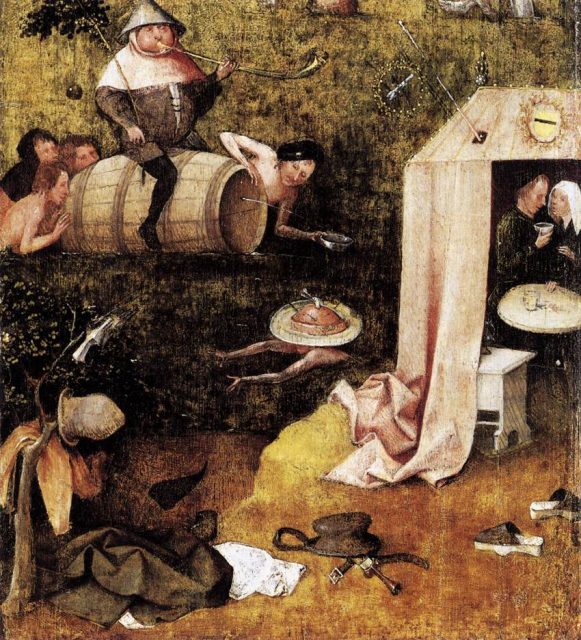 It was just as well, since he was captured very shortly after leaving for his mission. He was strip-searched and whipped but he didn’t initially betray his cargo — however after Prussian counterintelligence spent a day with him, he did, ultimately confess.

They waited for him to…pass the message, and when he did, they were irate to discover that it was of no real import. The enemy officers believed he had real, and valuable, intelligence, and he thought the same thing, himself. The Prussians beat him again and subjected him to a mock execution before he was released.

Needless to say, the events of his spy mission left him understandably traumatized, and he begged a physician to cure him of his condition. That physician, Dr. Percy, tried a number of treatments to cure him of his excessive appetite, including sour wine, opium, tobacco pills, and large quantities of soft-boiled eggs, but none of it worked.

Tarrare was reduced to stealing carrion for his own consumption and drinking blood from other patients. He was evicted several times from the hospital morgue after he was found trying to eat corpses.

It wasn’t until after the disappearance of a toddler, of which Tarrare was the prime suspect, that incensed hospital staff drove him away. His whereabouts and activities weren’t really known for the next four years. In 1798, however, he turned up at a hospital in Versailles, so sick he could hardly stand.

He, himself, thought it was the result of eating a gold fork, but medical staff diagnosed him with tuberculosis. About a month after he was admitted, he developed terrible diarrhea and died within a matter of days.

No one during or since Tarrare’s time has ever been able to diagnose the cause of his condition, and although the reports of what he consumed are very hard to believe, there was a great deal of documentation of his eating habits made by some of the most respected medical people of his time.

Read another story from us: The Victorian Zoologist who Tried to Eat Every Animal on Earth

Dr. Percy wrote in his memoir, “Let a person imagine all that domestic or wild animals, the most filthy and ravenous, are capable of devouring, and they may form some idea of the appetite – of Tarrare.”