Early this year, fashion magazines were oohing and aahing over the latest revived trend in footwear and how to wear it this fall season: thigh-high boots.

But what no one was expecting in 2018 was the arrival on the scene of a skeleton, 500 years old, wearing thigh-high leather footwear.

Archaeologists found the man’s skeleton face down in the mud under London’s River Thames, downstream from the Tower of London. He had apparently been buried there for centuries. 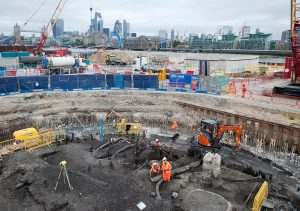 The New York Times reported, “Perhaps most intriguing, what remained of his legs was discovered in a pair of thigh-high leather boots — unusual even for his time. Specialists say the man could have been a fisherman or a mudlark — a scavenger who hunted for objects of value by the river.”

The discovery was linked to sewers. The skeleton was found at Tideway’s Chambers Wharf site in Bermondsey, where work is currently underway to build the Thames Tideway Tunnel to stop sewage pollution in the River Thames.

In a statement, the scientists said, “The river was a hazardous place even in the late 15th century, so perhaps his occupation was the cause of his death and the reason he came to be discovered. Could he have been a fisherman, a mudlark or perhaps a sailor? Was he climbing the Bermondsey Wall when he fell into the water? Did he become trapped in the mud and drown?” 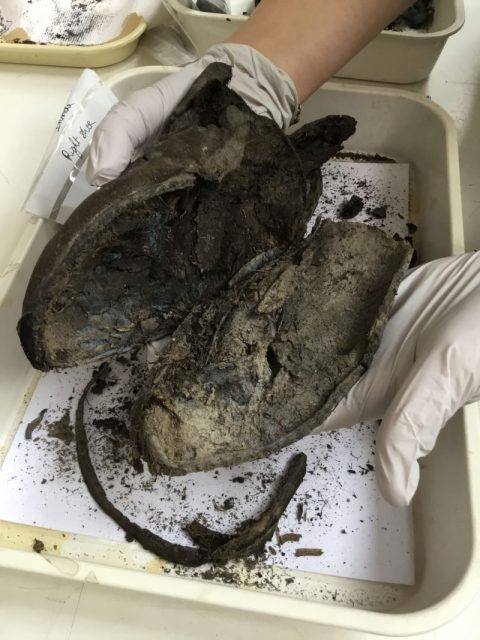 “The discovery has sparked an investigation by a team of our archaeological and osteological experts who are unraveling the mystery of the booted man in the mud. So what does the evidence tell us?”

First of all, the specialists studying the boots believe they date to the late 15th or early 16th century. Leather was expensive and often re-used at this time and experts “believe it is unlikely that someone would have been buried wearing such a highly-prized item. The boots would have reached thigh height when fully extended, therefore would have been ideal for walking out into the river and through the sticky Thames mud, so were perhaps waders.”

The boots were definitely built to last. Conservators revealed that they were reinforced with extra soles and stuffed with an unidentified material (possibly moss) perhaps to make them warmer or improve the fit. 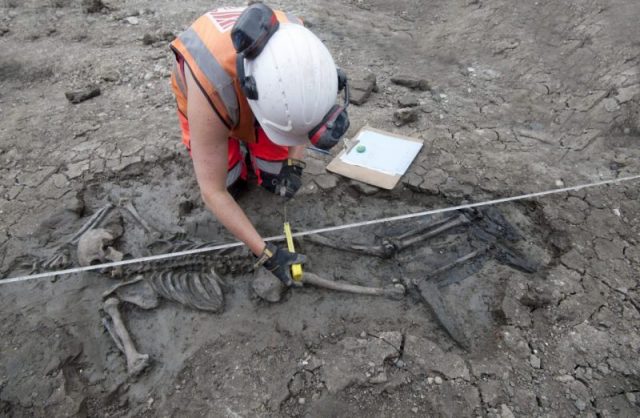 This research suggests the person wasn’t buried deliberately and the clues also indicate the owner may have made his living from the river, which could well have led to his untimely demise.

Scientists believe that while it is not unusual to find burials on the foreshore, “the booted man’s position was unusual: face-down, with one arm above his head with the other bent back on itself to the side. These clues could suggest that he fell or drowned and was covered quickly by the ground as it moved with the tide.” Experts have not identified evidence of any injuries at the time of death.

However, there are clues about how he might have made his living, evidence of the damage to his physical health from the extreme physical demands of his work on his body, “and why he might have ended up in the silty deposits of the River Thames where he lay undisturbed for more than 500 years.” 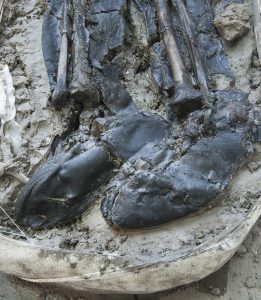 Experts believe it’s possible he was under the age of 35 at the time of death. By then he had already led an active life, which left its mark on his skeleton. “His daily life wouldn’t have been comfortable – he would have felt pain and discomfort from osteoarthritis. Possibly the biggest clues about his life are deep grooves found on his teeth.

They were caused by a repetitive action like passing rope between his teeth as a fisherman might – which may also suggest that he made his living from the river.” The Thames is regarded as London’s longest archaeological site, and the river muck has historically turned up a lot of discoveries.

Nancy Bilyeau, a former staff editor at Entertainment Weekly, Rolling Stone, and InStyle, has written a trilogy of Tudor-era thrillers for Touchstone Books. Her new book, The Blue, is a spy story set in the 18th century. For more information, go to www.nancybilyeau.com