England’s Most Famous Medieval Street Takes You Back in Time

There are many cities across the UK with a street named The Shambles, such as Manchester, Worcester, Chesterfield, Whitby, and Chippenham.

But no other quite resembles the uniqueness of the Shambles in York, a narrow street of authentic medieval shops and houses that used to accommodate a large amount of the city’s butchers.

This magical piece of history is also renowned as J.K. Rowling’s inspiration for Diagon Alley. 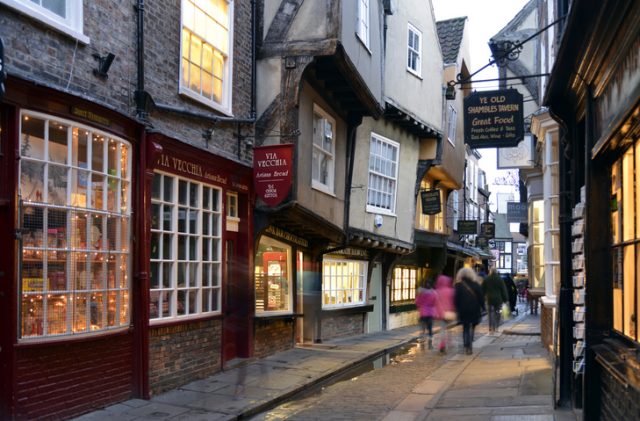 Probably the most famous street in York, Shambles has been a shopping street since Tudor times and is possibly Europe’s most visited street.

The word “Shamble” derives from the Old English words “sceamel” which means booth or bench.

In the past, this famous street in York used to be called the Great Flesh Shambles, from the Anglo-Saxon word Fleshammels, which were shelves for butchers’ meat, writes Alan Franks in his article “What a Shambles: a walk around York’s ancient walls and alleys,” for The Guardian. 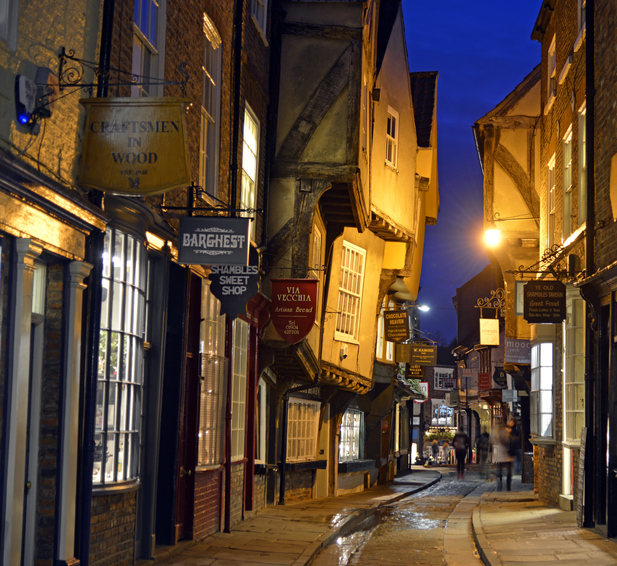 The Shambles in heart of the city of York, England has changed very litle since it was first built hundreds of years ago and is visited by thousands of tourists every week of the year. Taken just after dark to show the street and window lights of the shops.

York’s 900-year-old Shambles is known as “Europe’s best preserved” medieval street, as well as winning Google’s “Most Picturesque Street in Britain” in 2018.

According to History of York website, many of the buildings on the street today were built between 1350 and 1475, while the long existence of the street was confirmed by its first mention in the Doomsday Book of 1086, a manuscript ordered by William the Conqueror. 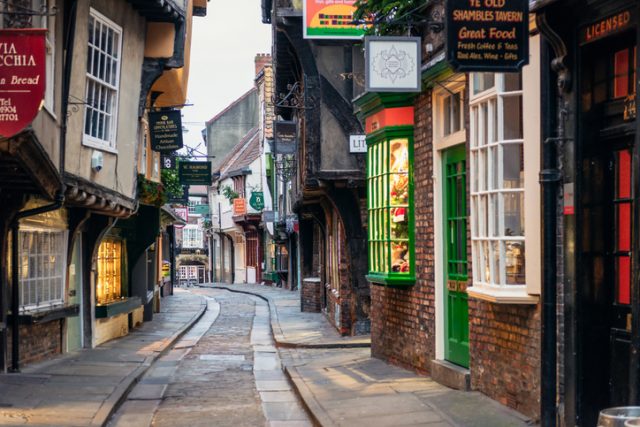 Early morning on the famous narrow medieval street in the historic centre of York, filled with shops, pubs and cafes.

The buildings on Shambles have recognizable 15th century overhanging upper storys that lean towards each other, seemingly almost close enough to touch. 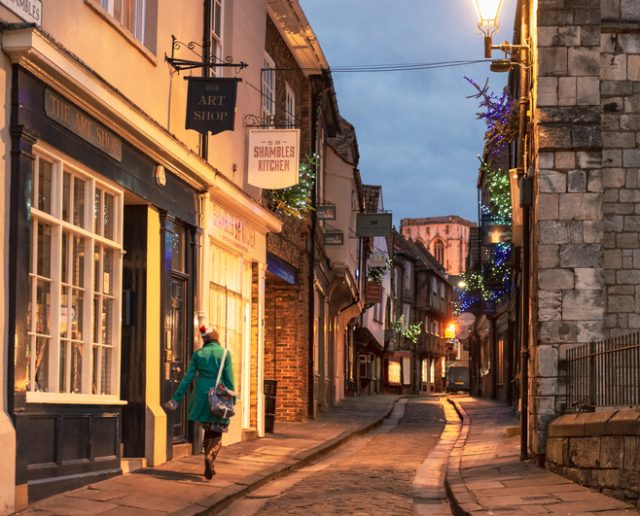 York, UK – A woman walking along Shambles, one of the best known historical streets in Europe.

The street would have been the place to buy meat in York; records show there were as many as 26 butchers shops, but none remain today.

Much of the livestock was slaughtered on site, and the butchers would all wash out their premises twice a week, sending a river of blood and offal down the gently sloping street towards Fossgate. 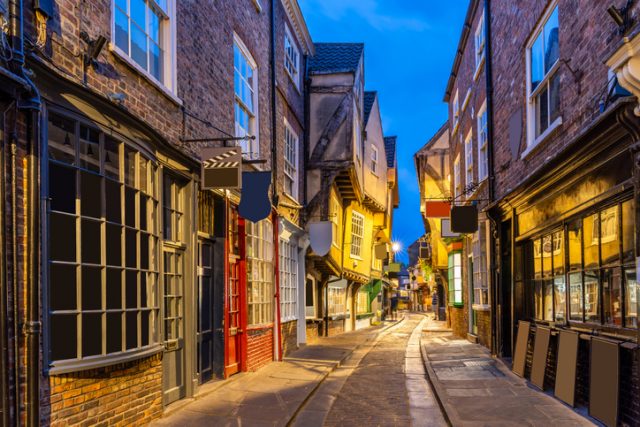 So to make sure people could keep their feet clear of the waste, the pavements were raised on both sides, forming the cobbled channel that runs down the middle.

Since the streets served for disposal of waste from the butcher’s shops, people threw their domestic garbage from the windows above the street into them as well. This only added to the unsanitary conditions. 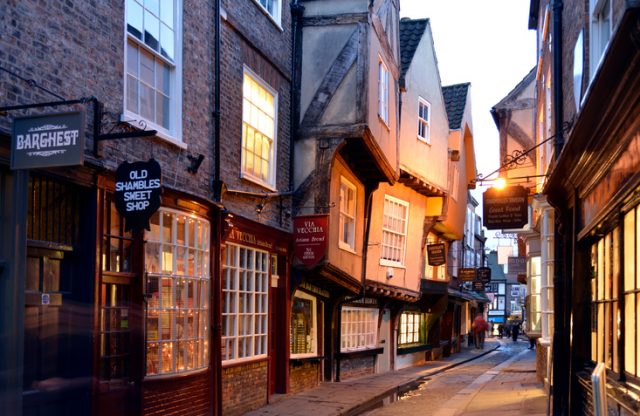 Shambles is probably the most famous street in York.

Nowadays, tourists who visit the street can see original butcher’s hooks hung on the front of the shops or below the windows, even though the last butcher’s shut in 1872. 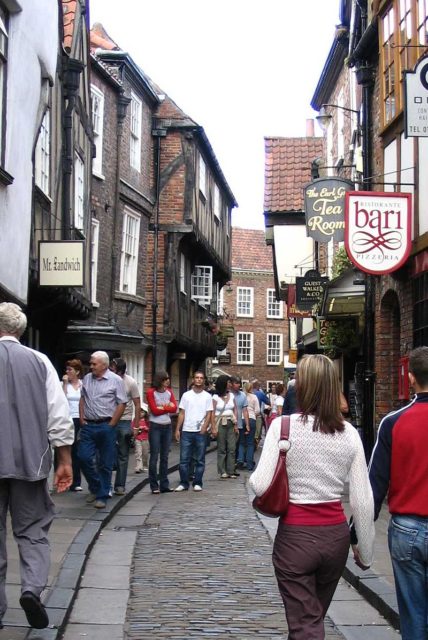 And while there is no butchers shop to buy meat, there are numerous shops to grab a bite such as an Italian bakery or the traditional Shambles Tavern.

There are also cafes, pastries, handmade chocolates, jewelry shops, and various souvenir shops — Harry Potter fans will even find a place to buy themselves a new wand. 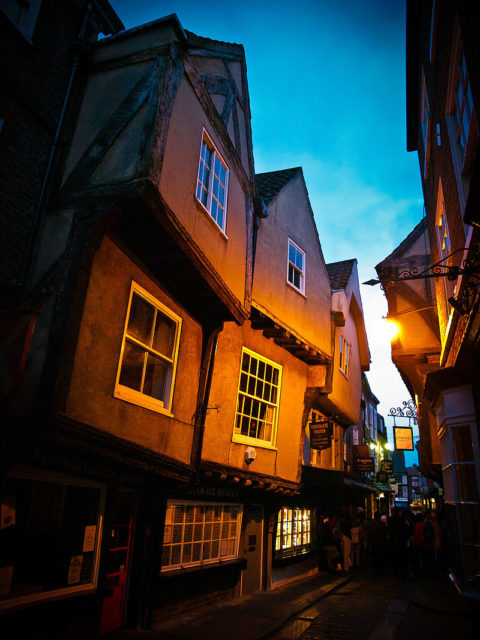 The Shambles by night. Photo by Sebastian Mrozek CC BY-SA 3.0

If you are ever visiting York, don’t miss the opportunity to take a walk along Shambles and examine its architecture. The street is very narrow by modern standards and one gets the impression of taking a step back in time.

There is even a myth that at some sections of the street if you stretch your hands, you will be able to touch the house on the other side.

Among the many charming buildings, number 35 is distinguished by its significance: the home of  Saint Margaret Clitherow, known as the Pearl of York.

Read another story from us: A Walk Through History – The Ancient Pilgrimage Route from Canterbury to Rome

According to the BBC’s The Pearl of York, written by Carole Green, Margaret was married to a prosperous Shambles butcher and in 1574, during the Protestant Reformation, she converted to Catholicism.

She took to hiding Catholic priests and clergy vestments in her home but was betrayed to the authorities and arrested. Centuries later, Margert Clitherow was canonized, and in the 1970s her home was turned into a shrine.