Nine thousand years ago, during the Neolithic period, culture in the PneiHever region of southern Mt. Hebron was undergoing a fundamental shift from being a hunter-gatherer society to an agricultural society.

Not only did the change mean profound differences in how the people of the time fed themselves, the agricultural revolution also meant major shifts in how society as a whole shaped itself with regard to social structures, and it included an increase in religious/ritual activity, according to David Israel, writing for the Jewish Press.

Among the artifacts from that time which have helped archaeologists learn about those social structures is a recently discovered stone mask. 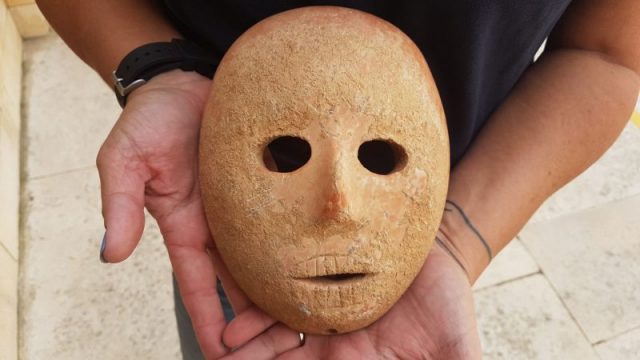 At the beginning of 2018, the Israeli Antiquities Authority Theft Prevention Unit was informed of the discovery and recovery of the mask. A subsequent investigation of the information revealed that it came from PneiHever.

Other such masks have been discovered, but they are very rare. Only 15 other examples have been known to exist prior to this find, and of those 15, not all of them have been in good condition, and the specific places they’ve been found aren’t known for certain.

RonitLupu of the IAA Theft Prevention Unit said “the mask is a unique find in the archaeological world. It is even more unusual that we know which site it came from. The fact that we have information regarding the specific place in which it was discovered makes this mask more important than most other masks from this period of which we currently know.” 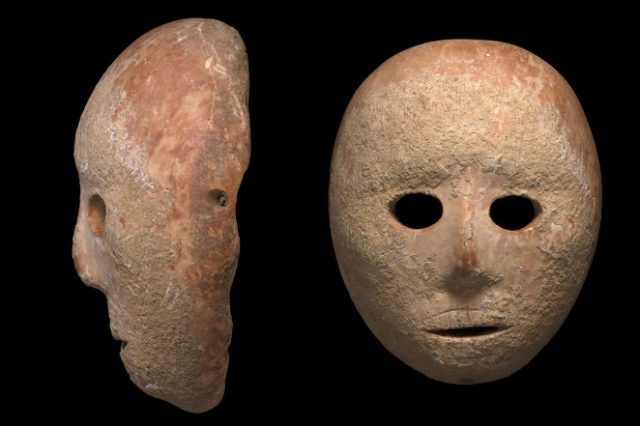 The mask is carved from pinkish-yellow limestone, and made to resemble a human face. Four holes drilled around its edges on opposite sides suggest it was meant to be tied onto to someone’s head or some other object.

Lupu expressed excitement over the quality of the find, describing it as being very finished.  The stone was quite smooth all over, and the facial features were symmetrical.  There were teeth carved around the mouth of the mask, and it boasted a nose she called ‘impressive’.

The IAA Archaeological Research Department says that the masks, along with other artifacts, such as human-shaped figurines and plaster skulls, are linked to the area’s burgeoning agricultural revolution, and they all reflect that ancestor-worship was common in that place and time. 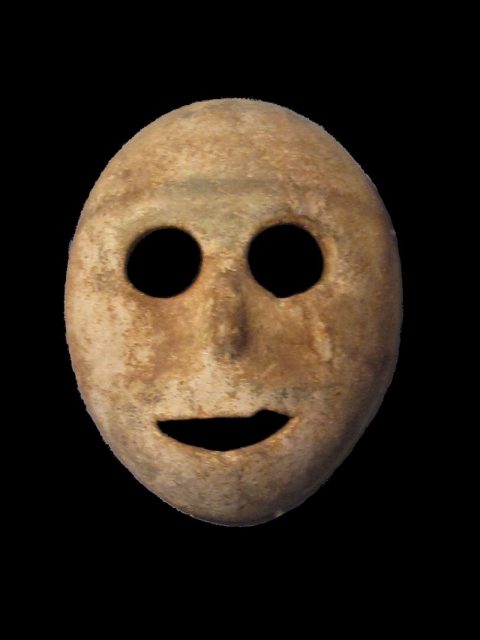 his stone mask from the pre-ceramic neolithic period dates to 7000 BC and is probably the oldest mask in the world (Musée “Bible et Terre Sainte”) Photo by Gryffindor CC BY-SA 3.0

Scholars connect the masks to ancestor-worship because they are so close in size to actual human faces. Such artifacts are believed to have ritual significance, and be part of the maintenance and remembrance of family heritage.  Archaeologists have found skulls buried under the floors of ancient dwellings, too, as well as seeing several methods of shaping and caring for the skulls of the dead, which all seem to support this idea.

According to National Geographic, the precise role such masks played in the culture of the time remains unclear. Alan Simmons from the University of Nevada, Las Vegas, says that while the mask, and others like it, may well be related to ancestor worship, we don’t know it for certain.

Their use could be part of funeral rituals, or some other sort of ritual, or could simply be decorative or celebratory.

Many of the unknowns are because the vast majority of the masks that have been discovered are in private collections, making them impossible to seriously study, and their provenance may be a bit murky. 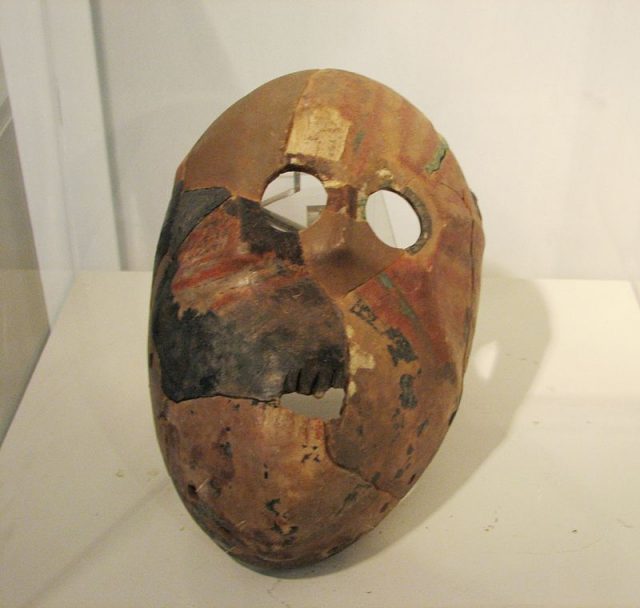 Only two of the 15 earlier discoveries can be tied to specific locations; one was found at Nahal Hemar, and a second mask was purchased by an Israeli General.

Being able to place an artifact in its geographical context may not be sufficient, though.

Yorke Rowan, a professor of Archaeology at the University of Chicago, discussed that even if the general geographic location is known, that still doesn’t provide necessary context.

Context comes from study of what else the piece was with, which may give clues about how it was used. If the mask was found in what was obviously a burial site, or some other sort of ritual context, that would give a much clearer idea of an object’s meaning and use.

IAA has conducted a preliminary isotopic and mineralogical study of the site where the mask was said to be found, and preliminary results were consistent, but no in-depth excavation has been done as yet.

This leads some scholars to at least consider that the find’s authenticity may be suspect, and to point out that the finish on the mask could be replicated on a counterfeit, but Lupu disagrees.

“I’m sure that this is the context for this find. I think when we publish the [final analysis of the mask], it will be a done deal.” She said.