In an interview with NPR, David Soren, curator of the American Vaudeville Museum Collection at the University of Arizona, got right to the point: “The Cherry Sisters were generally regarded as the worst ever.”

The sisters lost their parents at an early age. In 1893, Ella (the eldest, who would leave the group early on), Lizzie, Addie, Effie, and Jessie formed a variety act to pay for a trip to the World’s Fair in Chicago.

Three of the Cherry Sisters.

The sisters were also pretty big on patriotism and devout Christians — though a sketch featuring a faux crucifixion was in questionable taste.

When the Cherry Sisters first performed at their hometown opera house, audiences — comprised mostly of friends and neighbors — were kind. Misreading their reaction and encouraged by the polite applause, the sisters figured they were ready for the big time. 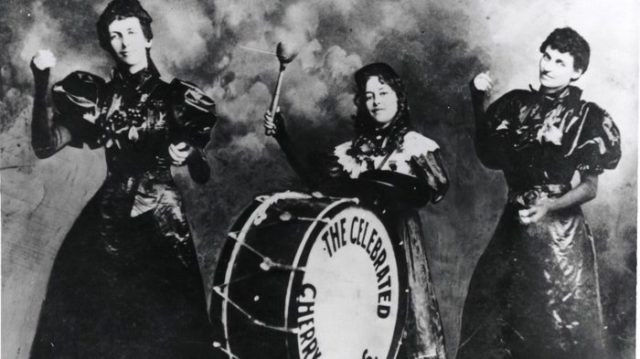 Three of the Cherry Sisters siblings strike a theatrical pose.

They traveled to Chicago and scored an audition with an agent. Getting a gander of the girls in their homespun clothes, he “must have sensed the potential of novelty,” according to Vaudeville, Old and New by Frank Cullen, and sent them on a tour of around the Midwest.

Let’s just say, it did not go well. Audiences were not amused, nor were they entertained. In fact, they were downright enraged — heaving tomatoes (or any other fruit, vegetable, or projectile they could get their mitts on), heckling, and in the words of one observer, “behaving badly.” And it would only get worse. 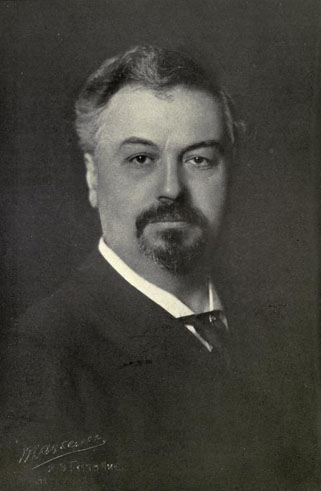 Oscar Hammerstein I brought the Cherry Sisters to New York in 1896.

More and more towns were anxious to see firsthand just how godawful the gals were. The Chicago Daily Tribune reported that when the Cherry Sisters appeared at the Dubuque Grand Opera House, they “were pelted with everything from an onion to a tin boiler and were afterward badly treated on their way to their hotel.”

One audience member sprayed a fire extinguisher into one of the ladies’ faces, forcing the sisters to perform behind a protective wire mesh.

The critics in the press weren’t much kinder. The editor of the Chronicle, in Odebolt, Iowa, described the Cherry Sisters as “creatures surpassing the witches in Macbeth in general hideousness… Their long skinny arms equipped with talons at the extremities, swung mechanically, and soon were waved frantically at the suffering audience. Their mouths opened like caverns, and sounds like the wailing of damned souls issued therefrom,” a review that would be reprinted in the Des Moines Leader. That cinched it. The Cherry Sisters sued both papers for defamation, claiming the over-the-top attack on their appearance constituted libel. 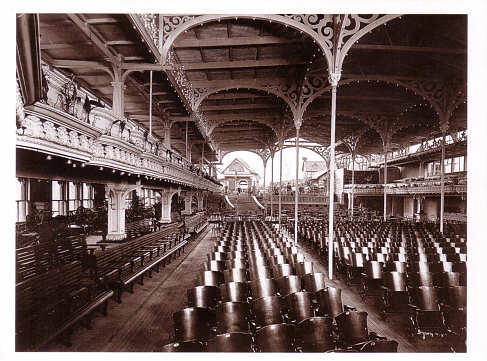 The Paradise Roof Garden above the Victoria Theatre, New York, c. 1902. Card from a postcard book. The theatre was demolished in 1915.

When the Polk County Court ruled in favor of the newspapers, the sisters appealed to a higher authority. No, not Him — the Iowa Supreme Court, which upheld the verdict, stating, “If one makes himself ridiculous in his public performances, he may be ridiculed.”

But bad news travels fast and in the mid-1890s, Willie Hammerstein, one of New York’s most successful producers, hired the Cherry Sisters for a well-paying engagement at his Olympia Music Hall, which was on the verge of bankruptcy. 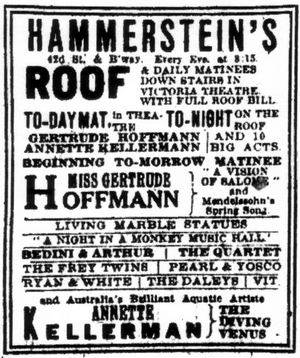 “I’ve been putting on the best talent and it hasn’t gone over,” said Hammerstein, candidly. “I’m going to try the worst.” Smart move. Just two weeks after the opening of Something Good, Something Sad, the theater was flush with money, and the show ran for six weeks, people flocking like rubberneckers at a pileup.

Pulling no punches, The New York Times headlined their review “Four Freaks from Iowa,” then attempted to find some deeper explanation for the atrocity they had just witnessed.

It would read, in part: “The effects of poverty, ignorance, and isolation are much the same all over the world, and the Cherry Sisters exhibited every one of them with a pathetic frankness that left no question as to their status or their character.”

The plucky Cherry Sisters continued to tour for a few more years, until Jessie, the youngest, succumbed to typhoid fever in 1903, at age 31. Rather than soldier on without her, the sisters packed it in. Effie, not quite over the spotlight, ran unsuccessfully for mayor of Cedar Rapids, twice — ever the glutton for punishment. None of the sisters would marry.

Masochists or masterminds who were just messin’ with people’s minds? According to Vaudeville, Old and New, people were divided. Some think the Cherry Sisters didn’t have a clue as to how bad they were; others believe they knew exactly what they were doing.

Read another story from us: Artist Transforms Victorian Portraits into Superheroes

Perhaps it was a little of both: five girls from Iowa who learned how good — not to mention lucrative — being bad can be. After all, what are a few tomatoes, really, when you’ve got your own Wikipedia page?