The Japanese ‘Schindler’ who Saved Thousands of Jews from Concentration Camps

The story of Oscar Schindler is well known across the world, largely thanks to the Oscar-winning movie of 1993, directed by Steven Spielberg. It tells the story of the German businessman and Nazi party member who saved hundreds of Jews from the concentration camps during the Holocaust.

However, few people have heard of Schindler’s Japanese equivalent, Chiune Sugihara. While working in the Japanese consulate in Lithuania in 1940, Sugihara single handedly saved the lives of thousands of Jewish refugees by granting them visas to escape via Japan. 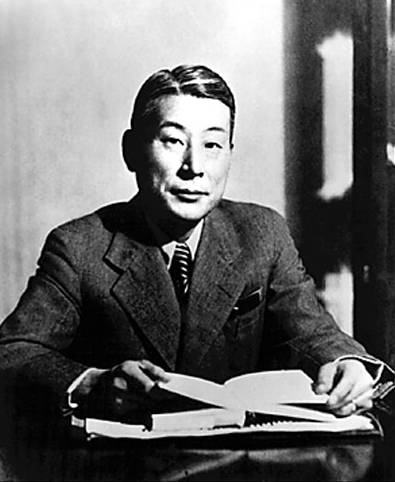 According to the Times of Israel, in 1940, Sugihara was working as the Japanese vice-consul in Kaunas, then capital of Lithuania. The city had a large and prosperous Jewish community, comprising around 30,000 people.

This population was supplemented between 1939 and 1940 by thousands of Jews fleeing persecution in Nazi-occupied Poland. These refugees brought with them terrible tales of the horrors befalling Jews under Nazi rule. 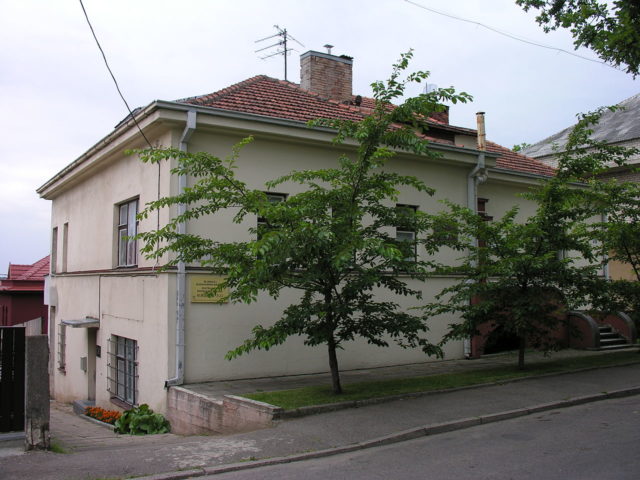 Unfortunately, after the Soviet Union annexed Lithuania in June 1940, the Jewish population of Kaunas remained trapped, unable to leave the country, even as the Germans advanced on the Soviet line. According to the Times of Israel, Sugihara became increasingly aware of the Jews’ desperate plight, and urgently sought a way to use his position to help them.

The Jewish refugees were unable to leave Lithuania and travel east through Soviet territory without guarantees of visas for onward travel. Many were heading for the Dutch Caribbean islands of Curacao and Guiana, but in order to get there safely, they needed transit visas through East Asia. 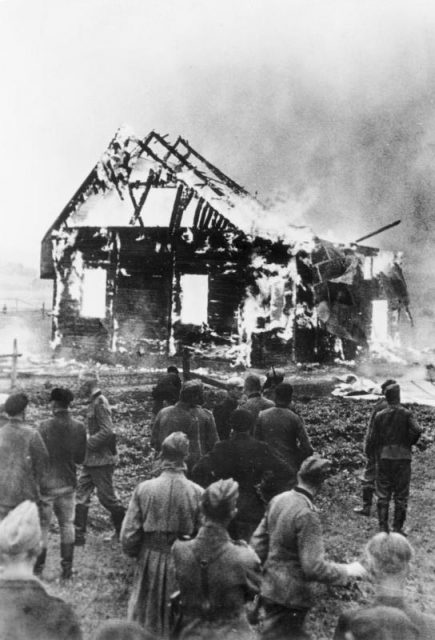 Sugihara immediately saw a way that he could help. He resolved to issue transit visas through Japan for Jewish refugees, allowing them to travel through the Soviet Union, into Japanese territory and then on to the Caribbean.

When all foreign diplomats were ordered to leave the city, he applied for leave to stay for an extra 20 days, and wrote to his superiors in the Japanese Foreign Ministry to request approval for his plan.

According to historian Yutaka Taniuchi, however, the Japanese authorities completely refused to issue visas to Jewish refugees, unless they had guarantees of onward travel from Japan. 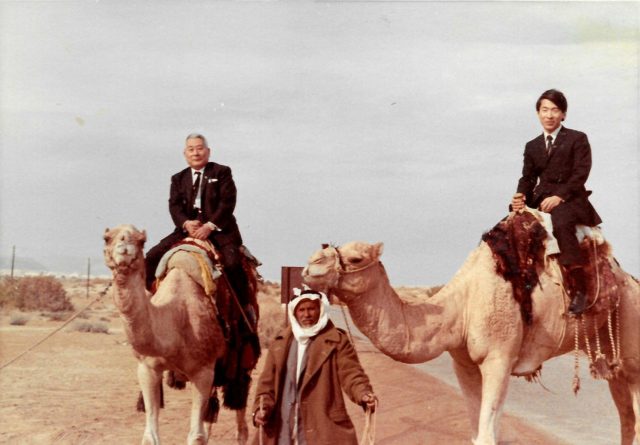 This was impossible for the refugees to obtain, and effectively precluded the possibility of obtaining any sort of transit visa. Sugihara wrote to his superiors three times, imploring them to help. When they refused, he was left with a considerable dilemma: should he follow his orders, or his conscience?

The Japanese culture of Sugihara’s time was one that prioritized hierarchy and discipline, and for Sugihara to go against the express wishes of his superiors was a very grave matter indeed. He faced severe punishment if he were to abuse his position and act in contravention of his orders. 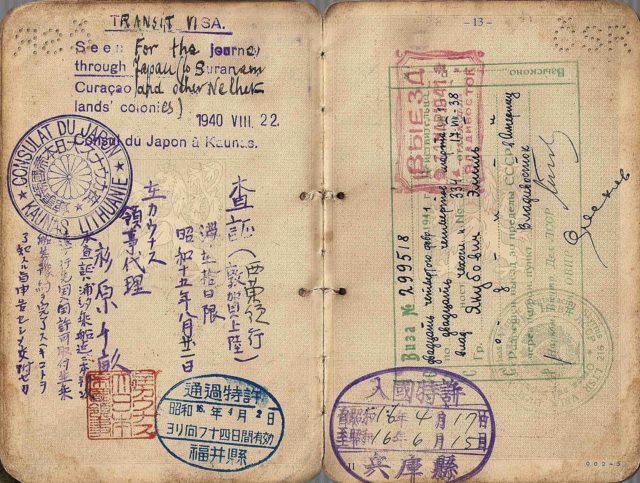 1940 issued visa by consul Sugihara in Lithuania, showing a journey taken through the Soviet Union, Tsuruga, and Curaçao.

Each day, hundreds of Jewish families appeared outside the gates of the Japanese consulate in Kaunas, begging Sugihara to help them. With the support and help of his wife Yukiko, Sugihara began to issue visas.

During the month of August, Sugihara and his wife were constantly engaged in the work of creating and distributing transit visas for Jewish families. They kept up a rigorous pace of around 300 visas a day, an extraordinary quantity that would have usually taken around a month to process. Sugihara worked around the clock, barely stopping to eat or sleep, determined to help as many families as he possibly could. 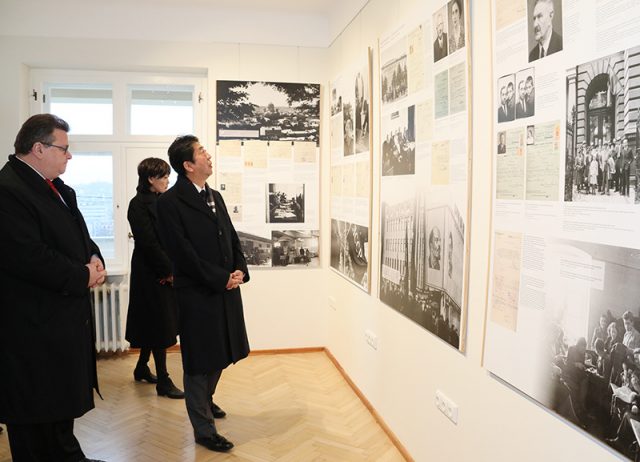 Shinzō Abe visits the former japanese consulate in Lithuania where Chiune Sugihara worked as vice consul. Sugihara helped some six thousand Jews flee Europe during the Second World War by issuing transit visas to them so that they could travel through Japanese territory, risking his job and his family’s lives. Photo by 首相官邸ホームページ CC BY 4.0

On September 1, 1940, Sugihara was forced to leave Lithuania, and departed on a train bound for Berlin. Even as he sat on the train on the platform waiting to depart, he continued to issue visas, throwing them into the crowd that had gathered next to the train.

At the last moment, he even gave his consular stamp to one of the Jews waiting on the platform, allowing him to forge visa permits for the remaining families. His final words to the crowd were, “Please forgive me. I cannot write any more. I wish you the best.” 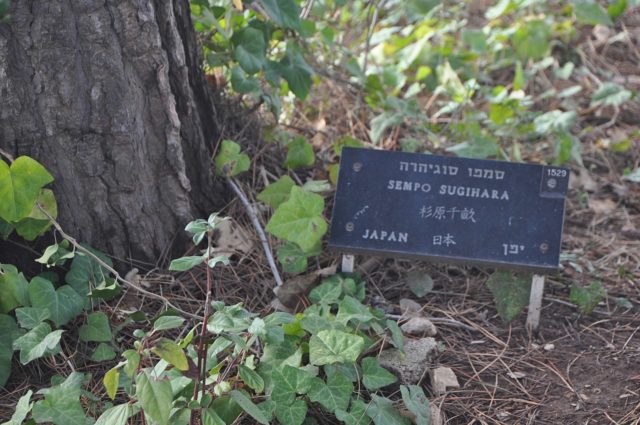 No one knows for certain just how many people were saved by Sugihara’s heroic actions, but it is estimated that he issued around 6,000 transit visas. Many of these were for families, so the number of people who were actually saved may have ben considerably higher.

Within a year of his departure, the Germans had taken over Lithuania completely. The Jews of Kaunas who hadn’t managed to get visas from Sugihara were deported to concentration camps en masse and in many cases, were murdered in the gas chambers.

Sugihara and his wife were subsequently imprisoned in Soviet-controlled Romania, and later released to the Japanese government, whereupon he was stripped of his position, title and job.

He was left to struggle in menial jobs, with little to support his family; a significant fall from the high-status diplomatic lifestyle he had been accustomed to.

Read another story from us: 25 Years Later – 5 Surprising Facts About Schindler’s List

Nevertheless, he never regretted his decision to help the Jews of Lithuania, and was rewarded for his courage in 1984 when he was named as Righteous Among the Nations by the state of Israel.