Archaeologists in Egypt have made a new tomb discovery — the final resting place of a high priest, untouched for 4,400 years, decorated with hieroglyphics. The secretary-general of the Supreme Council of Antiquities, Mostafa Waziri, described the find as “one of a kind in the last decades.”

The tomb was found buried in a ridge at the ancient necropolis of Saqqara. It was untouched and unlooted.

Officials say they expect more discoveries when archaeologists further excavate the site in the months to come. 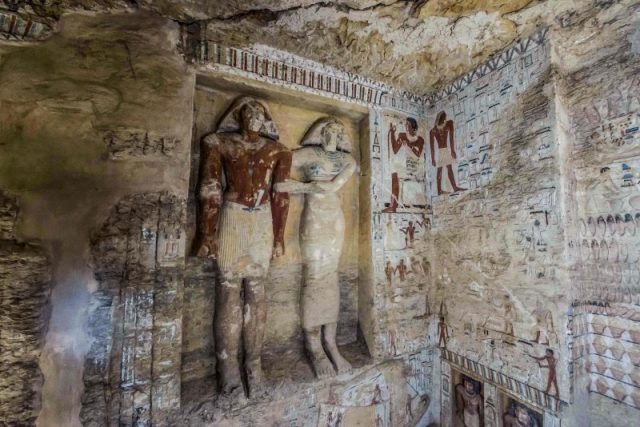 The well-preserved tomb is decorated with scenes showing the royal priest alongside his mother, wife and other members of his family, the ministry said in a statement. Photo by Khaled DESOUKI / AFP/Getty Images

The high priest was devoted to his mother, evidence shows. “He mentions the name of his mother almost everywhere here,” said Waziri in an interview, pointing to the dozens of hieroglyphics, statues, and drawings.

“The color is almost intact even though the tomb is almost 4,400 years old,” he added.

The high priest “Wahtye” served during the Fifth Dynasty reign of King Neferirkare (between 2500-2300 BC), at the Saqqara necropolis in Egypt. In addition to the name of the deceased, hieroglyphs carved into the stone above the tomb’s door reveal his multiple titles. 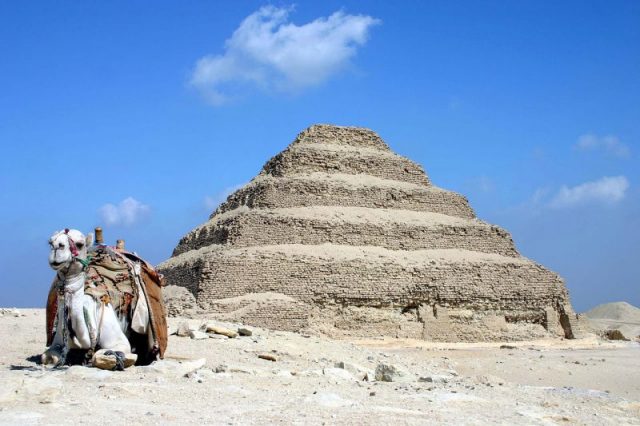 The grave’s rectangular gallery is said to be covered in painted reliefs, sculptures, and inscriptions, all in excellent shape considering how much time has passed.

The reliefs depict Wahtye himself, his wife Weret Ptah, and his mother Merit Meen, as well as everyday activities that include hunting and sailing and manufacturing goods such as pottery, according to National Geographic. 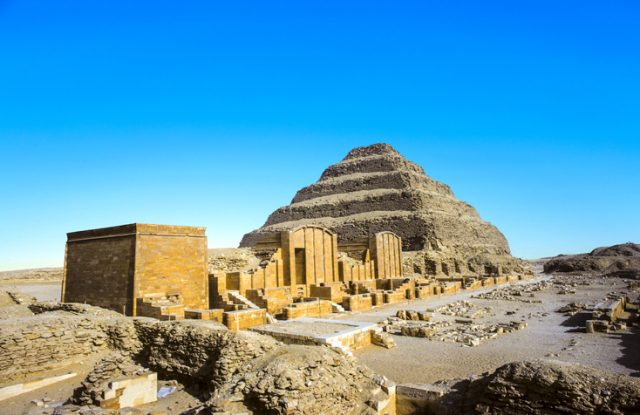 One of the shafts was unsealed with nothing inside, but the other four were sealed. They are expecting to make discoveries when they excavate those shafts. He was hopeful about one shaft in particular.

“I can imagine that all of the objects can be found in this area,” he said in an interview, pointing at one of the sealed shafts. “This shaft should lead to a coffin or a sarcophagus of the owner of the tomb.” 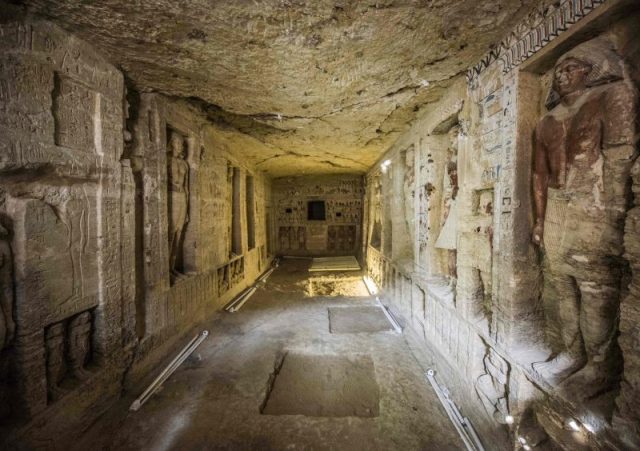 This picture taken on December 15, 2018 shows a general view of a newly-discovered tomb belonging to the high priest ‘Wahtye’ who served during the 5th dynasty reign of King Neferirkare (between 2500-2300 BC), at the Saqqara necropolis, 30 kilometres south of the Egyptian capital Cairo. Photo by Khaled DESOUKI / AFP/Getty Images

Various drawings depict “the manufacturing of pottery and wine, making religious offering, musical performances, boats sailing, the manufacturing of the funerary furniture, and hunting,” according to the site Egypt Today. Also NPR is reporting that the Saqqara site is part of a larger complex where archaeologists have discovered art and architecture that yield insight into daily life in ancient Egypt.

The Fifth Dynasty ruled Egypt from about 2500 BC to 2350 BC, not long after the great pyramid of Giza was constructed. 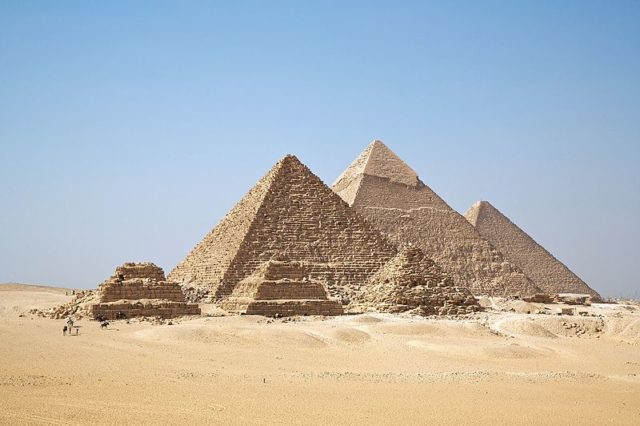 Saqqara served as the necropolis for Memphis, the capital of ancient Egypt for over 2 millennia.

Ancient Egyptians mummified humans to preserve their bodies for the afterlife, and animal mummies were used as religious offerings.

The rate of discoveries seems to be increasing. In November 2018, archaeologists unearthed eight new limestone sarcophagi containing mummies at a site that is 25 miles south of Cairo.

Egypt’s Antiquities Ministry said the mummies were dated to the Late Period (664-332 BC) and have an outer layer of cartonnage — papyrus or linen which is covered in plaster — decorated with a painted human form. Three of the mummies are well-preserved.

Images show the sarcophagus painted with the colors deep ochre and blue.

Moreover, days before the eight mummies were found, the perfectly-preserved mummy of a woman was found inside a coffin in Egypt dating back more than 3,000 years.

Read another story from us: The tomb of the high priestess Hetpet, built 4,400 years ago, unearthed in Egypt near the Great Pyramids of Giza

That sarcophagus was opened on November 24th, which was one of two coffins discovered in El-Assasif, Luxor, on the bank of the Nile.

« For Centuries this Mysterious Rock Art has Guided Caravans Crossing the Andes
A Golden Age? What Life was Really Like During the Pax Romana »