The Giant Prehistoric ‘Mushrooms’ that Covered Earth Before Trees Appeared

Today, we cannot imagine life on Earth without trees. From the dense rainforests of the Amazon to the vast Russian taigas, trees are our planet’s lungs. But it has not always been this way.

There was something else casting the thick shadows. Strange organisms with stalks up to three-feet-wide which could rise over 20-feet-tall. 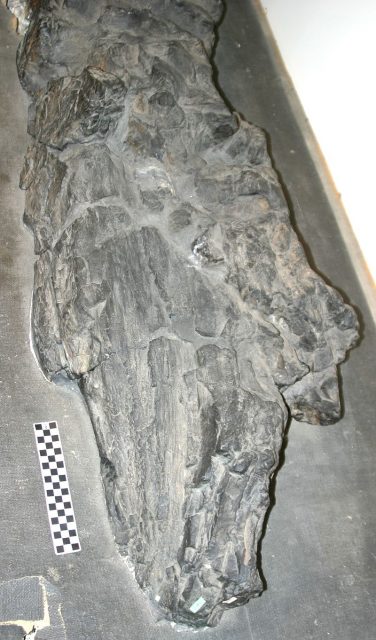 Scientists have long argued over how to classify these, until it was finally agreed: Planet Earth 400 million years ago was overwhelmed by gargantuan fungi. The prehistoric fungi then went extinct roughly 350 million years ago.

Some scientists remain skeptical if these ancient life forms were fungi or not, nevertheless, they are called Prototaxites and their fossils have been attracting attention ever since the mid-19th century. This was when the first fossils of it ended in the hands of paleontologists.

Dawson’s 1888 reconstruction of a conifer-like Prototaxites.

“Prototaxites fossils have a consistent tubular anatomy, composed of primarily unbranched, non-septate tubes, arranged in concentric or eccentric rings, giving the fossils an appearance similar to that of a cross-section of a tree trunk,” the website Phys.org describes the fossils.

The first research on Prototaxites was issued in 1859 by Canadian paleontologist John William Dawson, who used fossils discovered in Quebec. Since then, paleontologists have obtained an abundance of fossil specimens and have worked on more research, but nobody could confirm what the mysterious organism was until 2007. 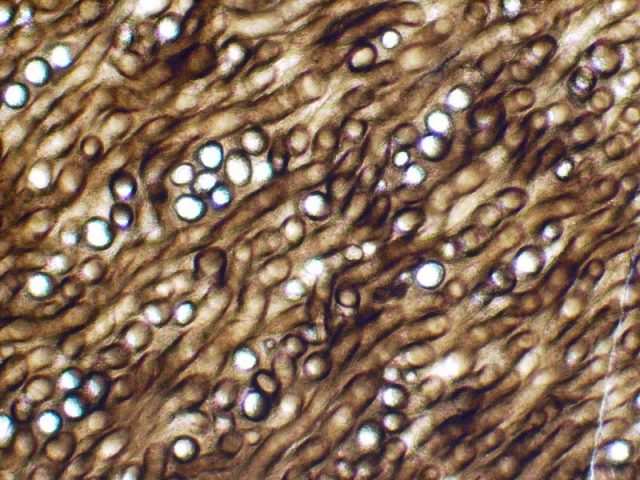 The microstructure of Prototaxites under a light microscope.

The various proposals that went for the unanswerable classification question, included that perhaps the Prototaxites were conifers, lichens, algae, or an ancient, unfamiliar variant of a tree.

“The problem is that when you look up close at the anatomy, it’s evocative of a lot of different things, but it’s diagnostic of nothing,” explained Professor C. Kevin Boyce in 2007, a paleobotanist who at the time was associated with the University of Chicago, and has since won a MacArthur Award in 2013 and works for Stanford. 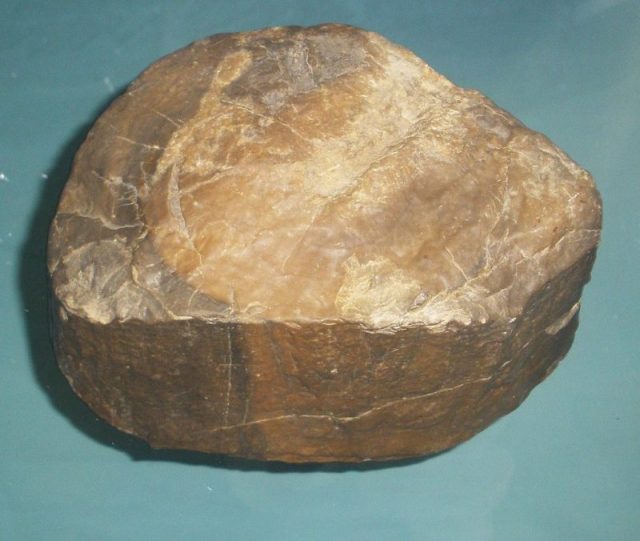 At the time, Boyce also appeared as one of several co-authors of the paper that officially classified Prototaxites as belonging to the Fungi Kingdom. The research team he was part of scrutinized the chemical nature of the fossils and their findings were conclusive that the strange, prehistoric living thing was a fungus. The find was presented in the May 2007 issue of the journal Geology, published by the Geological Society of America.

The major indicator the giant fossils did not originate from the Kingdom Plantae (or plants) was the variety of carbon types found in them, very different from the carbon traces left in plant species dated to the same era. 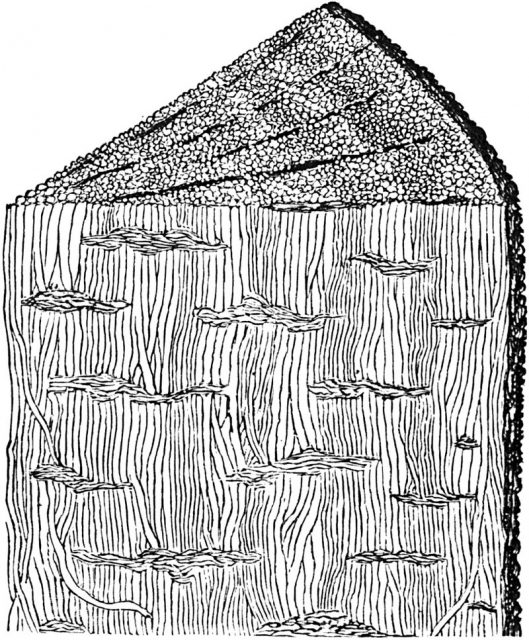 A cross-section of Prototaxites.

The first suggestion that Prototaxites should be classified as fungi was back in 1919, according to the University of Chicago, but there never was enough evidence to confirm this. The idea bounced back to life thanks to Francis Hueber of the National Museum of Natural History in Washington, D.C., in 2001. Hueber also appeared as one of the co-authors for the 2007 paper.

“He built up a convincing case based on the internal structure of the beast that it was a giant fungus, but agonized over the fact that he was never able to find a smoking gun in the form of reproductive structures that would convince the world that it was indeed a fungus,” commented Carol Hotton, also from the National Museum of Natural History. 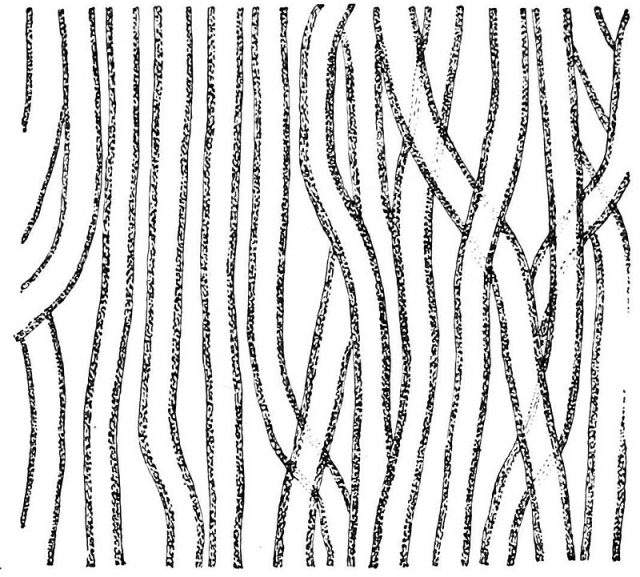 Since the question was ultimately settled, we are now more clear what kind of organisms dominated the world some 420 to 370 million years ago. It would have been a very unfamiliar world for us — as if conceived by the mind of a great sci-fi author.

Since Prototaxites easily grew nearly 30-feet-tall, this made them the biggest organism on Earth during the Late Silurian and Devonian periods. There were no dinosaurs who would stamp them into the ground. In fact, the diversity of life inhabiting the Earth’s land masses at this time would have consisted of primitive vascular plants, worms, millipedes and insects without wings. 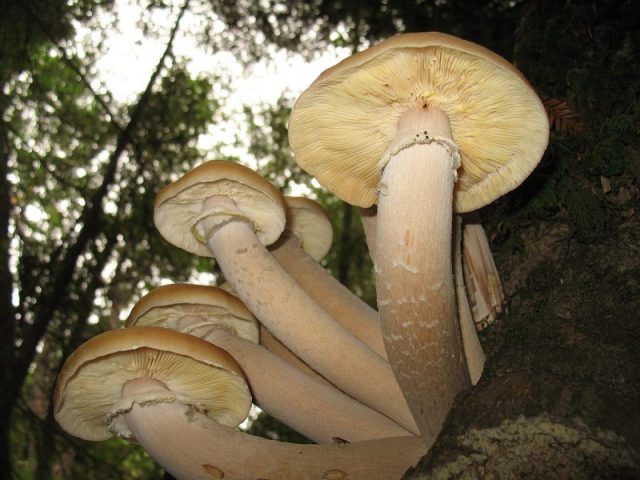 Backboned animals did exist but they only inhabited the world’s waters. The plants, distant ancestors of conifers and ferns, were undergoing their own evolution. They would have completed their full evolution cycle by the time the Prototaxites went extinct, but before that, they were simple stems without leaves or roots.

In case you find it strange that once upon a time a type of fungi was the biggest living organism on Earth, there are some stunning extant examples of how big they can grow.

In fact, the biggest living organism on Earth today is a fungus. In eastern Oregon, scientists have traced a representative of Armillaria Ostoyae which covers 2,385 acres in Oregon’s Malheur National Forest. “It’s bigger than an elephant, bigger than a blue whale, the largest organism on earth may not be what you expect,” wrote the National Geographic in 2017.

Read another story from us: For Centuries this Mysterious Rock Art has Guided Caravans Crossing the Andes

It started growing between 2,400 and 8,650 years ago. It’s a pretty compelling proof that its distant relative, the Prototaxites, could have easily reigned the world in the distant past.

« The First Recorded Labor Strike in History
The Great Biblical Enemy – Who was King Nebuchadnezzar II of Babylon? »