Thirty-eight years ago, a group of young American servicemen stationed in Suffolk, England, entered Rendlesham Forest to investigate some mysterious lights. What followed became known as “Britain’s Roswell,” and it subsequently became one of the most well-documented encounters between military personnel and what was believed to be an extraterrestrial craft.

The incident occurred over the span of three days, in late December 1980, and occurred in Rendlesham Forest, east of Ipswich, where two different NATO air bases were being leased to the US Air Force, according to the incident’s official website. 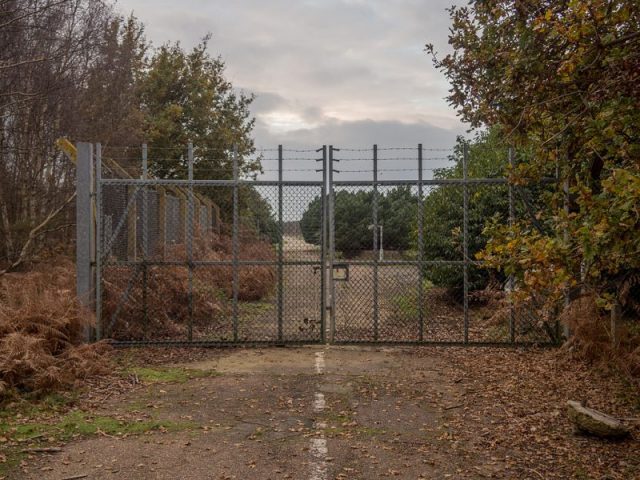 Over several days, American servicemen experienced a number of UFO incidents including radioactive anomalies and sightings by multiple witnesses. There were mysterious lights in the woods which appeared to emanate from a large, triangular, metallic object, according to one witness. 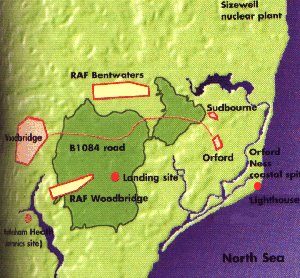 Map of the local area.

Penniston wanted to investigate the lights that the two MPs had seen, concerned it could be a downed craft, but Stephens told him he had already seen the lights land, and he was so unsettled by what he saw that he didn’t want to go out for the investigation.

Penniston and Burroughs went out to investigate accompanied by Airman First Class Cabansag, who had called in the incident. The three men drove to the forest where they saw the lights, going in on foot when they couldn’t drive any further. 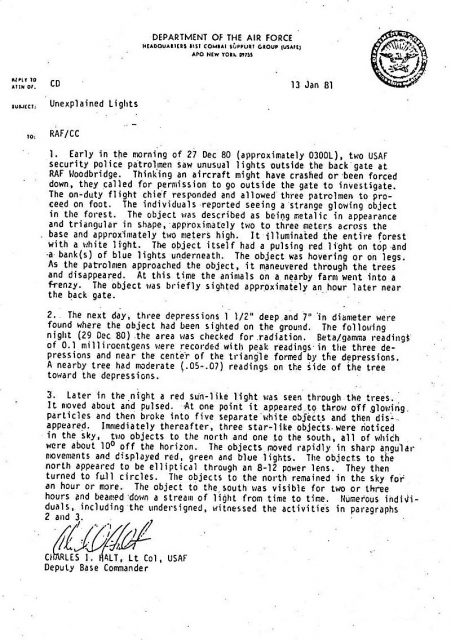 Memorandum by Lieutenant Colonel Charles Halt to the British Ministry of Defense regarding an incident in Rendlesham Forest, entitled “Unexplained Lights”.

Cabansag stayed with the vehicle to be a communications relay, and the other men went in alone, eventually spotting a metallic craft of a sort Penniston had never seen, with white light coming from the top and bottom and flashing red and blue lights at the sides. Penniston reportedly took pictures of the craft from all sides and even put his hands on it. He later said that, although he couldn’t see any occupants inside, he felt that there was life present within it.

When the men returned to Woodbridge Base and made their report, they were debriefed and told to forget they ever saw anything, but they returned to the site later, looking for physical evidence to back up what they saw. 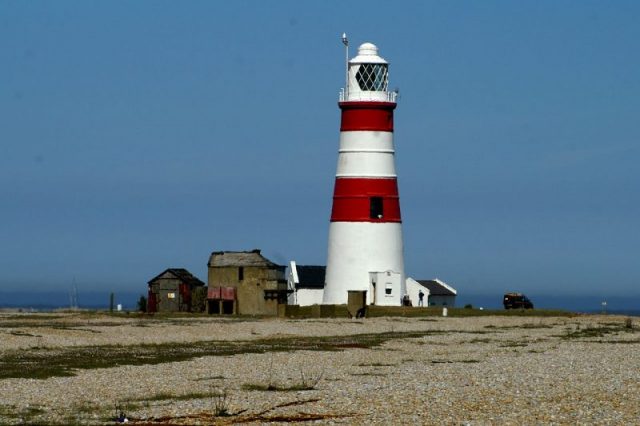 The Orfordness Lighthouse as seen from the south-west. A white shield blocked the light from the town of Orford but not from the forest where the sighting occurred. Photo by David Merrett CC BY 2.0

And then the sightings stopped. Nothing of the sort was ever seen there again, but when the incident was made public, it received significant interest. No solid explanations for what had happened were ever proven. 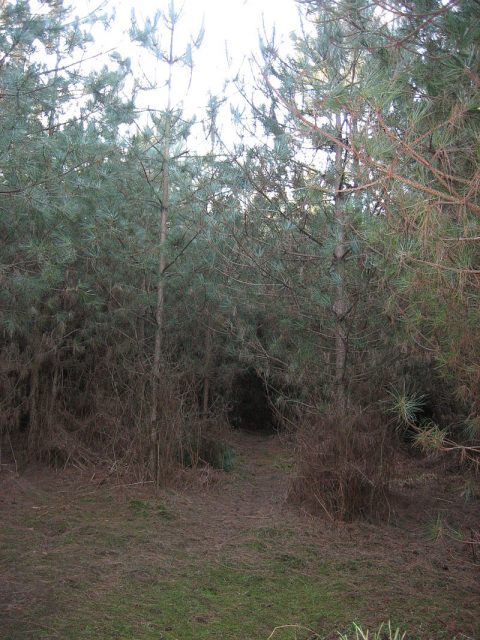 Recently, however, a new explanation was put forward. It was all an elaborate prank by members of the British SAS.

There are claims the whole thing was a hoax perpetrated by the SAS as retaliation for an event that had occurred in August of the same year. According to an article in the Telegraph, the SAS often tested US security by poking around the perimeter of the Woodbridge base.

In August of 1980, an SAS troop parachuted into the base complex one night as part of their security probes. What they didn’t realize was that the base had recently upgraded their radar. 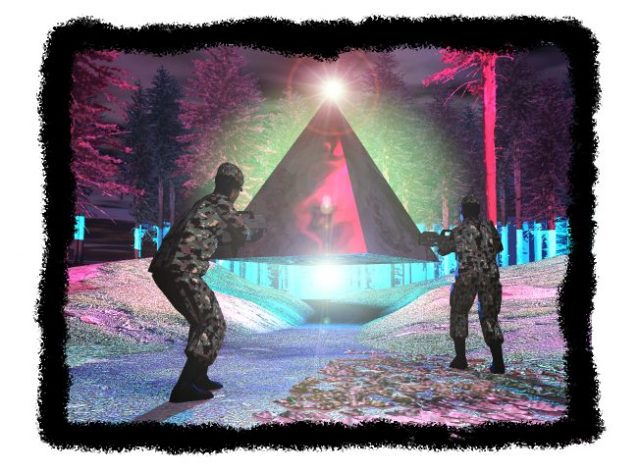 Even though the parachutes were black, making them nearly invisible to the human eye at night, they were picked up by the newly improved radar, and the British soldiers were promptly rounded up and taken for questioning. Members of the troop said later that they were beaten by their captor, who kept referring to them as “unidentified aliens,” refusing to believe who they really were.

Eighteen hours after their capture, they were released after the British authorities got involved, but they were angry about their treatment and about being called aliens on their home soil. The troopers began to plot their revenge, deciding to base it on the word they found so inflammatory – aliens. 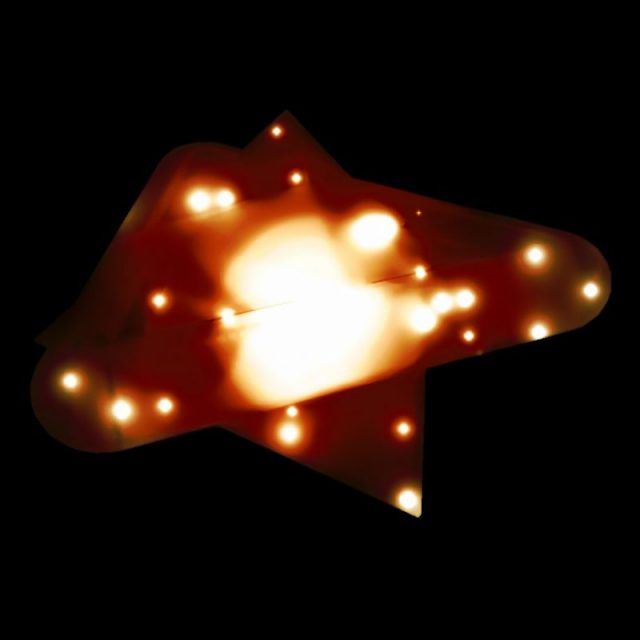 The moment of so called “explosion” of the unknown craft in Rendlesham forest area. Photo by Димитър Найденов CC BY-SA 3.0

The troopers reportedly rigged colored flares and lights among the trees in the forest and used black helium balloons attached to remote-controlled kits to rig the suspended elements.

Apparently, that should have been the end of it, a bit of harmless fun, except for the fact that the base commander saw part of the display and was impressed enough to put in a report to the Minister of Defense’s office. That report triggered an investigation after someone in London remembered the August incident, inquiries were made, and the truth was uncovered.

That’s the official story, but it still leaves some question marks. Penniston reported that the craft he not only saw, but touched, was about three meters across the base, and about two meters tall (about nine feet by six feet), which seems a bit large for balloons and kites to not just lift, but move speedily. Otherwise, the official story sounds plausible enough, if a bit sophomoric, but consider this…

Read another story from us: Leaked ‘Majestic’ Documents and their Alleged Proof of a Vast UFO Cover-Up

If the incident really was a contact with an alien vessel, would either government admit it to the public?