The Children’s Book Every Kid Dreaded in the 18th Century

In the 19th century, a German psychiatrist and writer wrote a children’s book which, if published today, would cause an outrageous scandal.

The year was 1845, the writer Heinrich Hoffmann, and the book was called Der Struwwelpeter, or Shaggy Peter. It is the most demented book ever published in Germany, where each morality tale is supposed to scare little children into behaving. 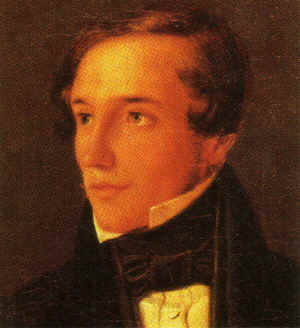 Although today most parents would find the book disturbing, most parents in 1845 loved the book and found it incredibly funny. Der Struwwelpeter contains ten very short but merciless stories. Unlike any other bedtime story, in these ones, little children are severely punished for bizarre mistakes and misbehaving. 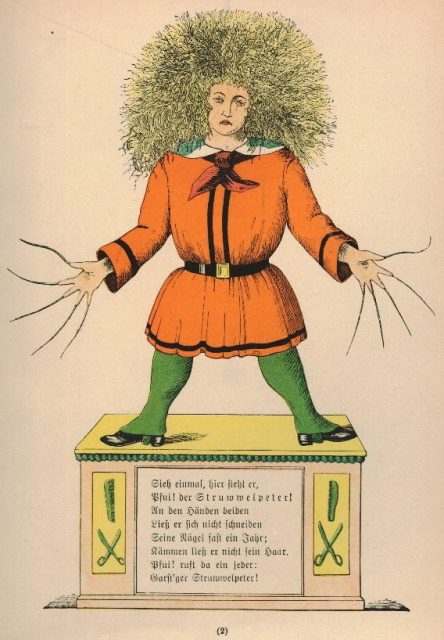 Der Struwwelpeter in a 1917 edition.

One such example is The Story of Augustus who wouldn’t eat his soup. Apparently, the boy was a “chubby lad” and a “hearty, healthy boy” who suddenly decided that he won’t eat soup any more:

“O take the nasty soup away!
I won’t have any soup today.”

Unfortunately, even though Augustus eats all other meals, he gets very ill from not eating soup and dies after five days. 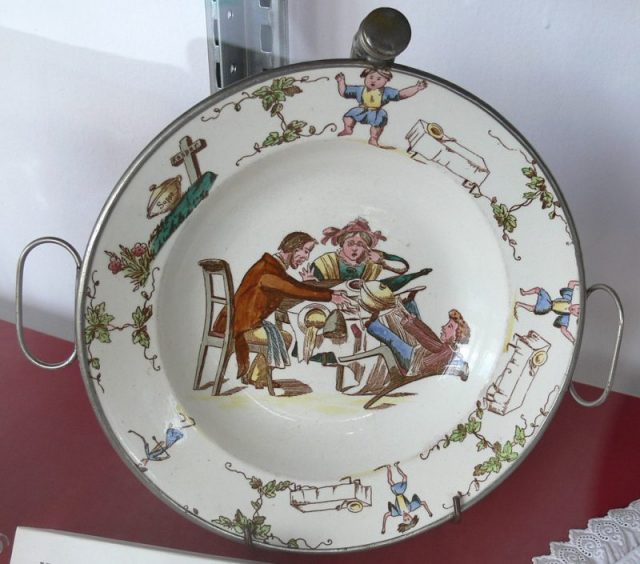 Another example is The Story of Little Suck-a-Thumb. A mother warns her little son, Suck-a-Thumb, not to suck his thumb because the great tall tailor will cut them off with his scissors. However, as soon as she turns her back, the boy sucks his thumb, and the “red-legged scissor-man” shows up: 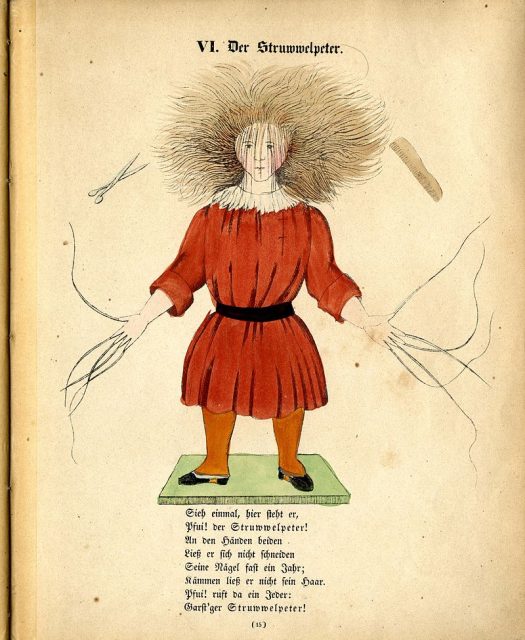 With this story, Hoffmann introduced the bogeyman character of the Scissormann (or the Tailor) that appeared in European folklore. The “horrid wicked boy” Frederick, the antagonist in Cruel Frederick who kills bugs, tortures animals and disturbs people, is put through a less permanent, although arguably more deserving, physical punishment. 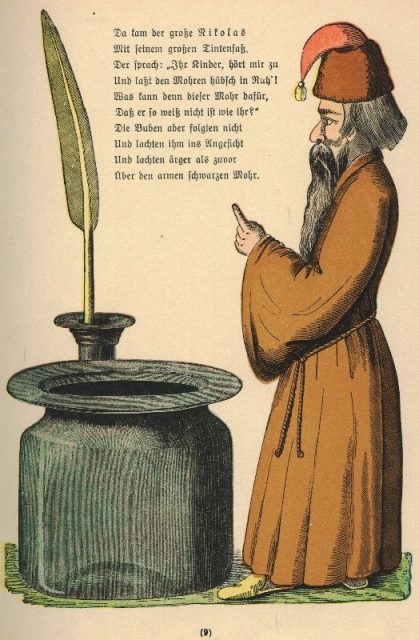 A dog that is teased by Frederick bites him and leaves him bedridden. While Frederick suffers the pain of his wounds, the dog eats the boy’s meals:

He seats himself in Frederick’s chair
And laughs to see the nice things there:
The soup he swallows, sup by sup-
And eats the pies and puddings up. 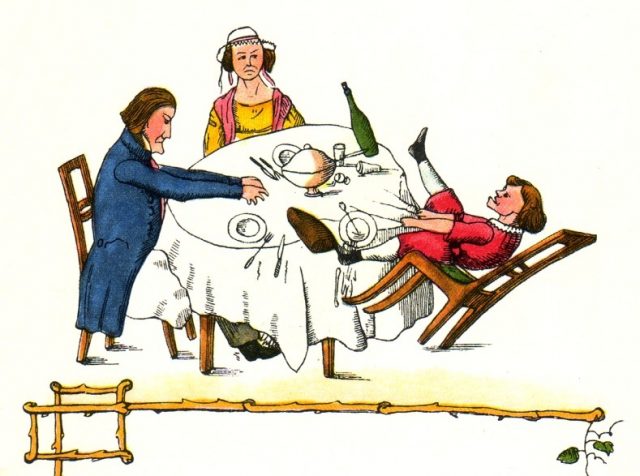 Originally, Hoffman wrote the stories as a Christmas present for his three-old son. Later he read them to his younger patients and his book club friends who encouraged Hoffman to release his stories to the wider public and helped him publish the book. He called it Der Struwwelpeter, after the antagonist in one of the stories.

At least 1,500 copies were printed, possibly as many as 3,000, as reported in a letter Hoffman sent to a friend. The book sold out in less than two years and the second edition was released with revisions made to the original drawings. 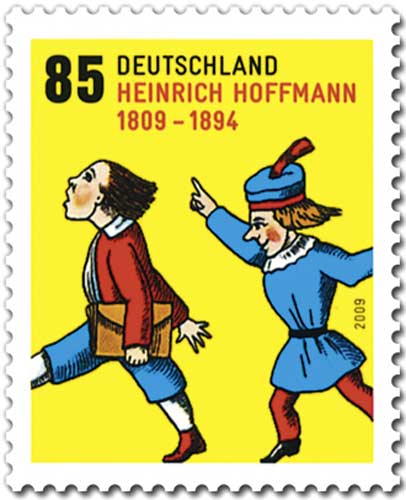 One of the book’s biggest fans was Mark Twain who was the first to translate it into English in 1891. Unfortunately, due to copyright issues, Twain’s translation Slovenly Peter was not published until 1935, after his death.

With its 15 pages, Hoffman’s book is a well-acknowledged masterpiece, not only for the stories but also for Hoffman’s illustrations in it, which are now considered a precursor to comic books. Also, researchers recognize many childhood mental disorders in the book that are known today. 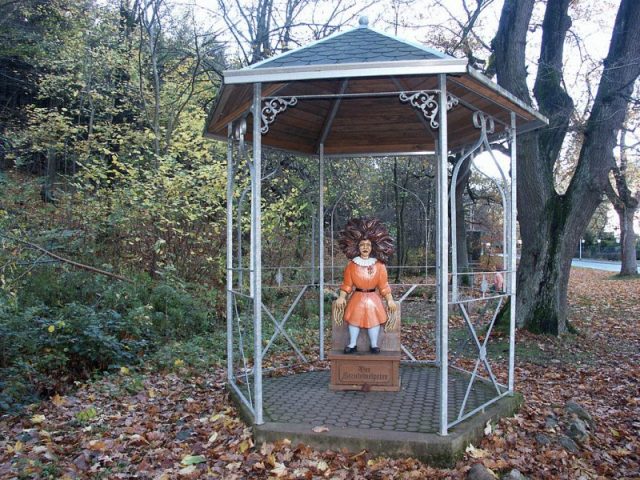 Some of the stories have been set on the movie screen, and some adapted for theatre plays. Famous authors such as Astrid Lindgren and Agatha Christie referred to Hoffmann’s stories and characters.

Read another story from us: Agatha Christie was a Surfer

The book is still a great read regardless of how young or how old one is. The fascination with it is guaranteed.

« Japan has Become a Major Player in the Spirits Market – That’s Due to One Man
How was Stonehenge so Precisely Built? These Cylinders Might Have the Key »